THE RAID: REDEMPTION is a game-changer. It is a visceral, emotional fight down to the last man. It not only lives up to the hype, but it takes the hype, beats the hell out of it and asks “who’s next?!” Well, on August 14th THE RAID is going to pull a fight club on your Blu-ray player as it makes its debut. We reported the news a few weeks back but now we have the official skinny on the release. 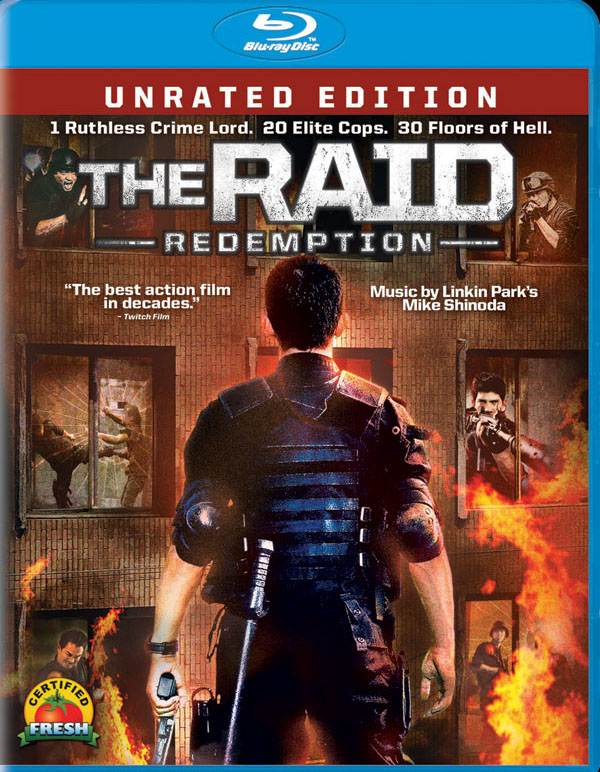 Iko Uwais and Joe Taslim star as members of a rookie SWAT team tasked to infiltrate a safe house containing the world’s most dangerous killers and gangsters in the hard-hitting, jaw-dropping, martial arts action extravaganza The Raid: Redemption, coming to Unrated DVD and Blu-ray™ with UltraViolet™ August 14th from Sony Pictures Home Entertainment. When the SWAT team’s cover is accidentally blown, they become stranded inside the dangerous high-rise with no way out and must fight their way through the city’s worst criminals to survive their mission. The film also stars Ray Sahetapy, Donny Alamsyah, Yayan Ruhian, and Pierre Gruno and features an English dub with music by Linkin Park’s Mike Shinoda. Both discs also include the original language track and music.

The DVD and Blu-ray™ are loaded with bonus features, including commentary with writer/director Gareth Evans; six behind-the-scenes video blogs with Gareth Evans; a “Behind the Music” featurette with Mike Shinoda of Linkin Park and composer Joe Trapanese; “Inside the Score,” a trailer teaser for Mike Shinoda’s first feature score, and “An Evening with Gareth Evans, Mike Shinoda and Joe Trapanese” feaurette. Also included are four featurettes in “Conversation with Gareth Evans and Mike Shinoda” on the hard shoot, score, stunts, and themes, as well as “An Anatomy of a Scene,” in which Gareth Evans talks in detail about creating the hole drop scene. “THE RAID TV Show Ad (circa 1994)” is a spoof of a 1994 Japanese anime TV commercial created by Phil Askin, with the idea that Gareth Evans may have seen it as a child and set off to make a live action version one day. Finally, “Claycat’s The Raid” features Lee Hardcastle’s UK claymation short film with a Mike Shinoda music score.

Deep in the heart of Jakarta’s slums lies an impenetrable safe house for the world’s most dangerous killers and gangsters. Until now, the rundown apartment block has been considered untouchable. Cloaked under the cover of pre-dawn darkness and silence, an elite swat team is tasked with raiding the safe house in order to take down the notorious drug lord that runs it. But when a chance encounter with a spotter blows their cover and news of their assault reaches the drug lord, they find themselves stranded on the 6th floor with no way out. The unit must fight their way through the city’s worst to survive their mission.