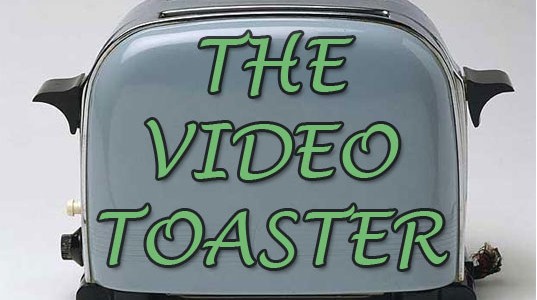 POP! The VIDEO TOASTER returns with three more strange relics of a bygone age (except for the fact that one of them is from last year).

While this column will be generally devoted to covering the width (and depth) of my cinematic collection, I’ll also be using it to showcase some of the various microbudget films that come my way that I, sadly, don’t have time to cover in great detail. Frankly, there’s so much wonderful, innovative, interesting stuff out there that you may finding me going a bit overboard, but… hey,.. It’s my column. Dick.

But, what you’re usually going to find here is a glorious hodge-podge. And this time, it’s particularly hodge-podgey. 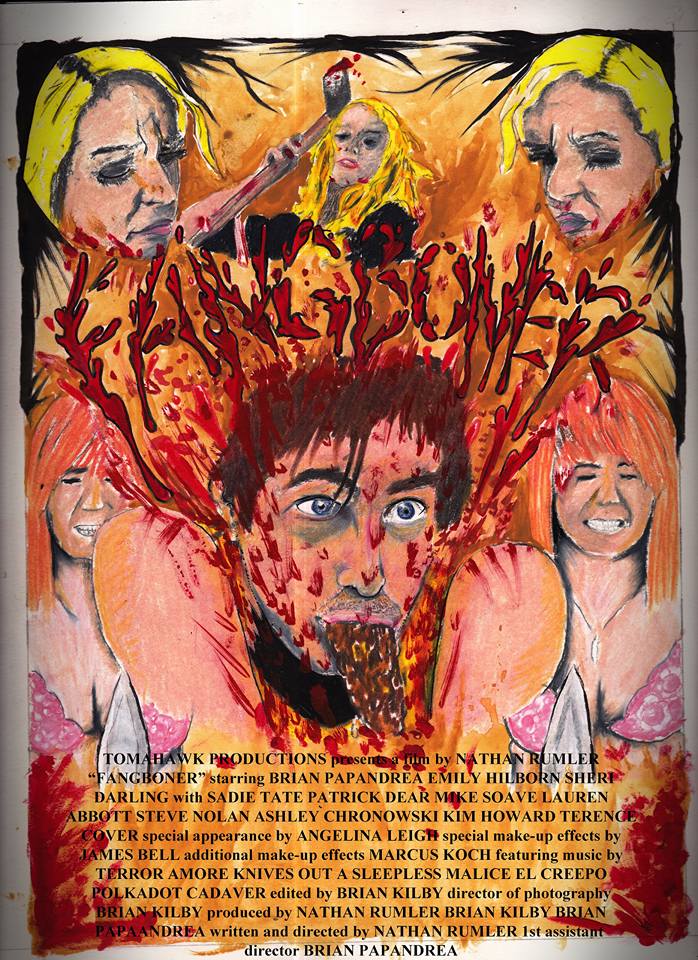 Director Nathan Rumler contacted me late last year about reviewing FANGBONER, and I stupidly put it off until now, despite it having the three elements I most enjoy in cinema: boobs, gore, and the word “boner.” It’s also completely ludicrious, smooshing together vampire cliches, extremely silly comedy, alien invasion and glorious exploitation into an uneven — but thoroughly pleasant — Mulligan’s stew of microbudget wonderfulness.

Frankly, if you’re unsure if this movie is for you (and the title should give you a clue) even a cursory plot summary should make it crystal clear. Most of it involves the appropriatley named Dick (Brian Papandrea), who gets his penis mangled in a drunken one-night stand and finds himself stricken with an all-encompassing thirst for blood! Except for the penis bit, it sounds pretty standard, right? Well, the rub is that Dick can only attain that blood from the crotches of his victims! He’s also soon joined in his pursuits by Suzy, a recent beau who accidentally catches the affliction after Dick – and his mutant tongue — attempts some botched (and messy) cunnilingus. The pair then have to go on a killing spree, while dodging the alien creature who has been tasked with eliminating them.

Yeah, that’s the stuff. FANGBONER takes its gives-no-shits attitude to the illogical extreme, most visible in the scenes involving an alien creature whose none-too-convincing tenticles wave around with the assist of very (VERY) visible strings. There’s also a dog attack sequence that is absolutely beautiful in how low-rent it is. Instead of trying to hide the strings, Rumler has embraced his low-budget asthetic and focused more on keeping his film moving forward to its inevitably messy conclusion.

Of course, there are also plenty of naked bodies, with the camera lingering on the female cast to an almost pornographic degree. To balance things out slightly. there are also some shots of an entirely unconvincing fake, mutilated penis (shades of ANTFARM DICKHOLE) for good measure. This fake dick plays a role in the film’s funniest scene, where a distraught Dick manages to cover himself, his clothes and a bathroom with piss thanks to some unfortunate wounds on his penis. Yes, you heard me.

It’s all incredibly, infectiously ludicrous, with its best moments reminding me of Drew Bolduc’s equally boner-centric THE TAINT. Like that film, this one suffers from some uneven acting — though Papandrea is excellent, and Sadie Tate does great work in a small role as a prostitute — and it runs out of steam well before the conclusion. However, at its heart it’s representative of what ultra low-budget cinema does best. It’s crazy, fucking up, and not like anything you’re going to see at the multiplex. Watch it with some friends. 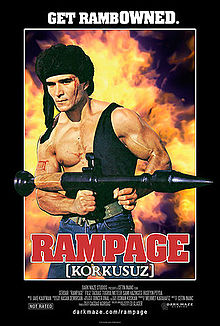 Continuning with our theme of not giving a shit, let’s give some props to the always-inspired Turkish film industry, which never saw a popular American property it couldn’t gleefully rip-off — complete with licensed music and — sometimes — footage from the film it was trying to imitate!

Still, these Turkish versions of STAR WARS (Dünyayi Kurtaran Adam), THE WIZARD OF OZ (Aysecik ve Sihirli Cüceler Rüyalar Ülkesinde), STAR TREK (Turist Ömer Uzay Yolunda), E.T. (Badi), DEATH WISH (Cellat) and others are a hundred times more fun and interesting than those awful mockbusters shat out by The Asylum. This time around we have KORKUSUZ (“Fearless”), which cribs aimlessly from FIRST BLOOD and RAMBO: FIRST BLOOD PART II, but with the usual mix of stitched together locales, wooden acting and excessive tumbling that typifies Turksploitation.

Muscleman Serdar Kebapçilar stars as Serdar, a Turkish military commando who goes undercover to infiltrate a group of terrorists hiding in the mountains in southeastern Turkey. Led by the evil Ziya (Hüseyin Peyda), Serdar attempts to ingratiate himself to the group by murdering a few police officers and helping Ziya’s brother escape, but Ziya isn’t convinced and buries him up to his neck to get him to confess.. something. Really, Ziya is just a dick, but eventually is convinced to send Serdar on a mission to retrieve.. somebody. Honestly, the plot didn’t make a lot of sense to me. But that’s ok! It’s really all about watching Serdar struggle to emote while getting sprayed by a (surprisingly low powered) hose, climbing mountains and — most notably — shooting a rocket launcher.

The climax gets predictably nationalistic and violent, with Serdar blowing up all the baddies with conveniently placed rockets and donning the trademark Rambo muscleshirt and bandana. Serdar is pretty awful, but thankfully you have Hüseyin Peyda’s bug-eyed villany to make up for it, and as you can probably tell, this is less a total rip-off of the Rambo films and more a homage that happens to poach some of the iconography. It’s all ludicrious, but very entertaining

The version of RAMPAGE (more popularly known as TURKISH RAMBO) I watched was the DVD version from Dark Maze Studios which excises all the licensed music and has a new dub track and score by Jake Kaufman (SHOVEL KNIGHT). The dub is fine, and smartly plays things straight, with Kaufman doing a fine job emulating the feel of the familiar Jerry Goldsmith FIRST BLOOD score. As with most low-budget Turkish films, the image quality is rough, with a scratchy, washed out print and rudimentary editing that may or may not have been performed by a chainsaw.

If you prefer to watch the original version, here you go: 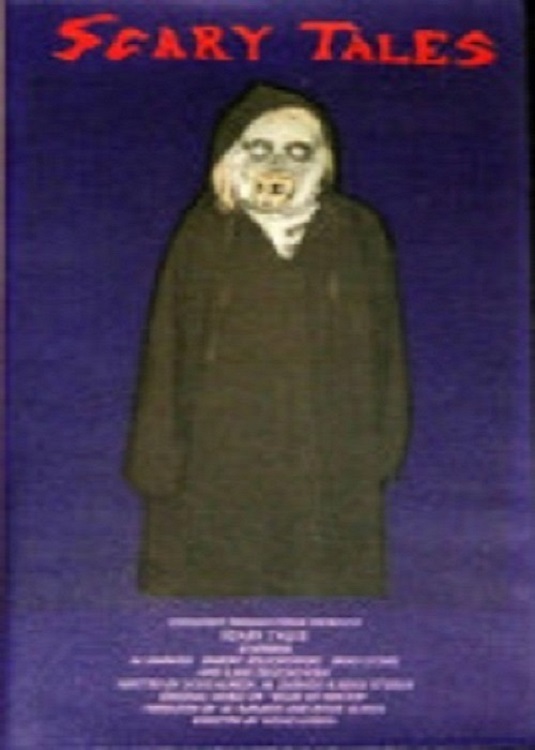 Not to be confused with STRANGE TALES (which I covered last week), SCARY TALES is another in a long line of SOV anthology films that manages to distinguish itself both via its strangely unnervic box art (I mean, just LOOK at it) and a sincere attempt to mix things up tonally in its three tales. Speaheaded by Balitmore filmmakers Doug Ulrich (who contributes some impressive backyard FX work here) and Al Darago (who contributes some horrid acting and a collection of some of the worst wigs I’ve ever seen), the technical limitations are more than made up for by enthusiasm and some inspired violence.

The first story is the perfectly titled SATAN’S NECKLACE, which features Darago as a pudgy metal detector enthusiast with unfrozen caveman lawyer hair who manages to find a mysterious necklace while, uh, detecting with his cop buddy Dan (Brad Storck). As you might expect, the necklace rapidly starts infecting his dreams, before turning him into a full-fledged demon — along with some impressive riffs on the AMERICAN WEREWOLF IN LONDON transformation effects. He rips out his girlfriend’s heart and takes a bite, before tangling one-on-one with Dan. Then things just end. Ok!

Next up is SLICED IN COLD BLOOD, which is basically a shortened version of LAS VEGAS BLOODBATH without the hot oil wrestling. Nebbish John (Darago once again) discovers his wife is having an affair, and messily dispatches her lover (via bow and arrow!) and her (via throat slitting) before going on a Baltimore-wide machete killing spree that mostly serves as an excuse for a series of fun, bloody effects. Best of all is John embedding his blade in the skull of a would-be rapist (also played by Darago), complete with the head splitting in perfect LONE WOLF & CUB style. There’s no ending once again, but who cares?

We finish things off with LEVEL 21, which mixes the ongoing epidemic of video game addiction with some sweet sword-and-sorcery action. Robert Zelechowski plays Bill, who has recently started ignoring his wife in child in favor of a sweet-looking (for 1993) fantasy computer game. Eventually Bill defeats the level, and his reward is being sucked into the game’s universe where he has to defeat a fireball throwing wizard known as THE DARK OVERLORD. There’s also a Yoda-esque little person, a group of ninjas(?) and a damsal in distress, and plenty of incompetently choreographed fight scenes. It’s a ton of fun, and smartly abandons the dark tone of the first two stories. There’s even a ludicrous twist ending!

There are also some extremely brief framing segments featuring some sort of giant robotic Jawa (voiced by Darago) reading some stories to children.

Shot on glorious consumer grade home video, SCARY TALES is technically on-par with the Todd Sheets films of the period, but there are a few extended moments when its rockin’ soundtrack by DEAD OF WINTER (also featuring Ulrich and Darago) manages to drown out all the Baltimore-accented dialogue. But, hell, that just adds to the fun. SCARY TALES is a winner, and well worth borrowing from your VHS-obsessed friend.