The ‘60s were a great time to be an older actress — at least if you were an older actress amenable to having your image roughed up a bit by appearing in a horror film in a “psycho-biddy” role popularized by 1962’s WHAT EVER HAPPENED TO BABY JANE?. That film’s stars, Bette Davis and Joan Crawford, were the most notable practitioners of the genre, but there were no shortage of other older stars making a buck on blood, including Tallulah Bankhead in DIE! DIE! MY DARLING, Debbie Reynolds and Shelley Winters in WHAT’S THE MATTER WITH HELEN?, and Miriam Hopkins in SAVAGE INTRUDER. 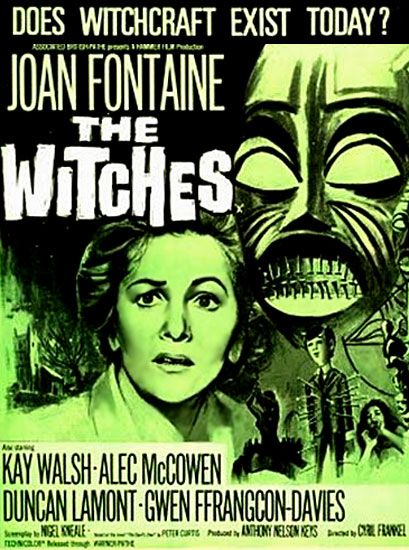 1966’s THE WITCHES, now out on Blu-ray for the first time via Scream Factory, may seem at a glance, to be part of the group, as it stars Joan Fontaine (whose sister, Olivia de Havilland, memorably made her mark in the field in LADY IN A CAGE) and is a Hammer film centered around an older woman, with shades of DIE! DIE! and Bette Davis in THE NANNY. However, THE WITCHES (also released under the title THE DEVIL’S OWN) falls more in line with the “outsider at the mercy of a secret cult” genre of films that would be revolutionized just a few years later with the likes of ROSEMARY’S BABY and THE WICKER MAN.

As a result, THE WITCHES has never gotten much of a reputation among horror fans — not adhering to one subgenre and being easily overshadowed by better films in another. That isn’t to say that THE WITCHES is without merit, but its relationships to more notable films have relegated it to a lesser-viewed entry in Hammer’s filmography.

In THE WITCHES, Fontaine plays English schoolteacher Gwen Mayfield, who starts the film as part of a mission in Africa. Her school, however, is under onslaught by unseen voodoo practitioners, which result in her having a nervous breakdown and heading back home after… something happens. What exactly happens is never explained, and it starts the film off on a bizarre note, making us sympathize with a vague trauma that’s never given any real merit. 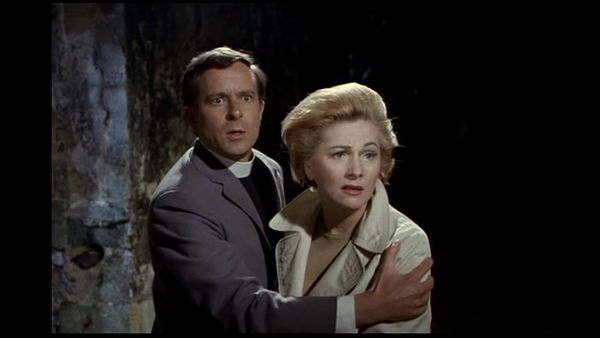 Gwen finds herself taking a job as a teacher in a small town at a private school run by the more empowered Stephanie (Kay Walsh) and her brother Alan (Alec McCowen), who dresses up like a priest (Gwen doesn’t find this particularly suspicious). Everything seems ideal at first, but soon, Gwen starts to notice a shady underbelly to some of the town’s residents, who disapprove of the relationship between two of her students for unknown reasons. Then a doll of one of the students shows up covered with pins — could the same voodoo be afoot in this small locale? Is it following Gwen?

With a script by Nigel Kneale (THE QUATERMASS XPERIMENT) based on a book by Norah Lofts under her “Peter Curtis” pseudonym, THE WITCHES isn’t bereft of interest, espousing a few interesting ideas and images, like a rag doll thrashing around on a ceremonial stage. The cast is solid, Fontaine makes for a compelling lead while never veering into camp, and the small-town atmosphere is used well. The first half of the film is solid, setting up cryptic little moments and providing a genuine sense that it’s building to something clever and unique. 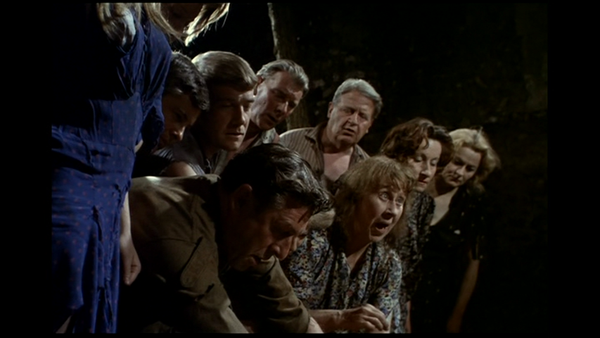 The problem is that THE WITCHES never really delivers on its ideas. Gwen’s presence in the film seems more like an afterthought than an instigator of the narrative, and while she does some investigating into the situations, it’s never quite clear whether or not her previous involvement with voodoo and subsequent breakdown has anything to do with her presence in the town. Even more oddly, the film stops and essentially resets itself about an hour in when Gwen gets amnesia and we have to wait until her memory returns, with no real repercussions to the plot beyond spending ten minutes of screen time.

THE WITCHES does have a few solid moments and the direction by Cyril Frankel (SCHOOL FOR SCOUNDRELS) manages to get a few nicely unsettling moments in the first half, but it’s let down by a conclusion that doesn’t really pay off. Bereft of the gothic trappings that provided a good part of Hammer’s most well-known films and playing down the horror elements to the point of barely qualifying as horror film at all, THE WITCHES never quite rises higher than the level of a curiosity in the filmographies of those involved. 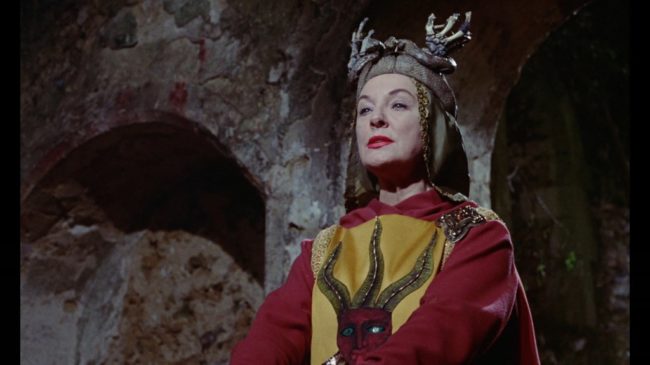 Mediocrity of the film aside, Scream Factory has done a fine job at bringing the film, last seen via Anchor Bay’s long out-of-print DVD, to Blu-ray. The memorable Hammer horror color is present and vibrant, and images are clean. Trailers and TV spots are present, as well as a commentary track by Ted Newsom (FLESH AND BLOOD: THE HAMMER HERITAGE OF HORROR) which is good in regards to factual information about the cast and crew, but there are a few dead spots and Newsom does occasionally get onto a tangent, such as when he starts going on about older actresses of the era. The disc also includes the documentary HAMMER GLAMOUR, looking at (and interviewing) Hammer’s leading ladies, which isn’t particularly attributable to THE WITCHES itself but still makes for a great bonus.

The solid package that THE WITCHES is encased in makes the Blu-ray a potential purchase, even if reaction to the movie itself is relatively lukewarm. It’s certainly a worthy addition to the ever-growing number of Hammer films on Blu, and I’m glad to see it seen in a format that accentuates its charms.