One of the key moments in ’80s period piece ATOMIC BLONDE feels innocuous enough: it comes towards the end of the film, with the camera panning down to a television screen, revealing a vintage MTV News broadcast wherein Kurt Loder addresses 1989’s biggest musical controversy: “Sampling: is it art or simply plagiarism?” he asks, inviting the audience to chuckle at yet another cultural relic the film trots out.  But more than that, it feels like director David Leitch’s self-aware nod, one that allows him to account for the film he’s made.  While ATOMIC BLONDE isn’t exactly an homage to anything specific, it’s certainly a sampling of popular aesthetic touchstones and narrative beats that coalesce into an impressive—if not familiar—pastiche. 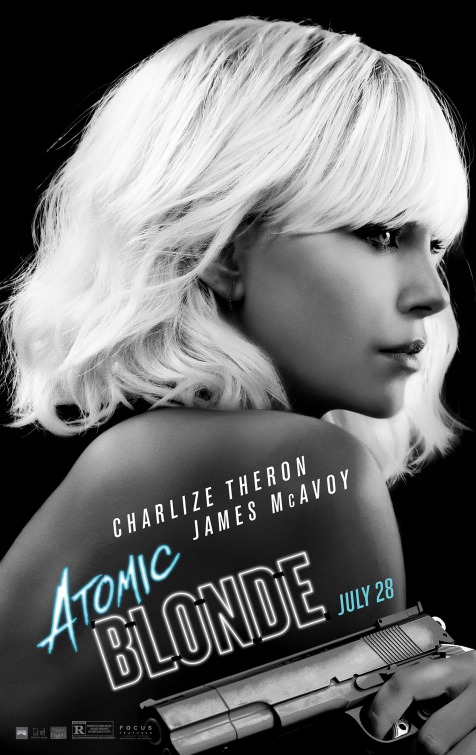 But when that pastiche is woven with neon, synth, new wave pop, and Charlize Theron kicking all of the ass, it’s the type of crazy quilt you just want to wrap around you.  ATOMIC BLONDE might as well be subtitled “Your New Favorite Movie,” as it’s out to allure with a cocksure swagger that’s constantly reminding you of how cool it is.  Leitch and screenwriter Kurt Johnstad have distilled Anthony Johnston and Sam Hart’s THE COLDEST CITY into a purely cinematic love letter to a movie that’s always playing in my head, if that makes any sense. Obviously, your mileage might vary, but this feels like one of those movies that’s been extracted directly from my brain.

MI-6 agent Lorraine Brighton (Theron) is the literal epitome of cool from the moment she emerges from an ice bath, covered from seemingly head-to-toe with an assortment of bruises and scrapes.  She shrugs off this carnage to her body, casually going about her business to the strains of David Bowie’s “Cat People,” one of the film’s many needledrops, though this particular one doubles as Leitch’s mission statement: ATOMIC BLONDE is going to be the coolest thing you’ve seen lately.

It proves to be so, even if the story does take a bit of untangling: we learn that Brighton is the subject of an interrogation regarding some recent exploits in Berlin that have obviously gone haywire. With a sneer in her voice and obvious contempt in her eyes, she recounts a mission that sent her undercover to the fractured city to recover a highly coveted list of identities that could extend the Cold War for another 20 years if it lands in Soviet hands.   Starting with the investigation of a colleague’s recent death, Lorraine descends down a perilous, labyrinthine path lined with deception and brutality.

The brutality is likely to be the film’s legacy, and rightfully so.  Don’t get me wrong: ATOMIC BLONDE’s plot is positively intricate compared to Leitch’s lean, mean JOHN WICK efforts, but its most obvious appeal is more or less the same.  You’re here to watch the star feature in dazzling action sequences and dole out punishment, something Leitch and company provide in spades.  Delivering the sort of intricately (and coherently) choreographed action you’ve come to expect from him, Leitch has pounded another terrific entry into the modern action canon with an assortment of brawls, shootouts, and even a car chase.  What’s striking here is the sheer physicality of it all, as Leitch seems to be intent on cataloguing and accounting for all of those bumps and bruises Lorraine has accumulated.  As cool as ATOMIC BLONDE often is, its violence is also cringe-inducing—albeit in the best way possible.

This is the sort of film that coaxes awe with bravura style, even as it features human beings punching, stabbing, and shooting each other.  A much-heralded (and rightfully so) brawl in a stairwell is nothing short of magnificent: unfolding in a single take (or an impressive approximation of one), it sees the camera wind and wend its way through the carnage, intimately capturing every thud and thwack but also pulling back just enough to do so coherently.  Leitch obviously has no interest in making an action film where the action is perfunctory, so each sequence feels like a showstopper.  I know we already compared one action movie to a musical this summer, and, while BABY DRIVER took the notion to the logical extreme, ATOMIC BLONDE at least functions somewhat similarly since most of its action is scored by one familiar pop tune or another, giving it some extra oomph.  Maybe it’s like icing on a cake, but who’s ever refused that?

Underpinning the action—which is not wall-to-wall, nor is it non-stop—is a slippery, serpentine plot involving mysterious rogue double agents and a Russian defector.  ATOMIC BLONDE is a genuine spy movie, one that thrives on intrigue, especially when the flashback structure allows for noticeable discrepancies between Lorraine’s story and reality.  Just as Leitch indulges his action movie sensibilities, so too does the script exploit the spy genre for its twisting, turning potential, as it unspools secrets up until the final minute.  It’s just goddamn fun.

Theron’s the anchor here, delivering a magnetic performance that quickly (and subtlety) establishes Lorraine’s fierce, weathered presence.  If the bruises covering her body don’t say enough, Theron’s icy, detached turn does the rest.  All of the movie’s swagger emanates from Theron, who confidently owns the screen, usually without saying so much as a word.  When she does speak, her words cut like barbs, particularly when they’re aimed at her superiors (Toby Jones & John Goodman), and there’s always a sense that she’s had enough of this shit.  She similarly has little patience for Berlin contact David Percival (James McAvoy), a shifty agent who invites suspicion almost immediately.  McAvoy is a wonderfully eccentric foil here, performing each scene with an impish glint in his eye and booze on his breath.

Another eventual contact (in this most literal sense) is Delphine Lasalle (Sofia Boutella), a naïve French agent in way over her head before essentially assuming the role of Bond Girl in a turn of events that provides a glimpse at Lorraine’s vulnerable side.  If she is a female Bond analogue, this willingness to delve into Lorraine’s psychology invites comparison to the Timothy Dalton and Daniel Craig eras: there’s a sense that a genuine person is lurking beneath this righteous, ass-kicking avatar, however faint it may be.

Such glimpses are brief, though: something titled ATOMIC BLONDE isn’t exactly consumed with dwelling on the drudgeries of the spy lifestyle.  And how can it when so much of it is otherwise focused on glamorizing how dope it is?  Between the enthralling action and steamy sex, ATOMIC BLONDE aims to reclaim this genre as a space for indulgent fantasies.  Despite unfolding in the shadow of the Soviet Union’s real-life collapse, it can hardly be considered a grim, serious-minded recounting of those events.  After all, it opens with the pretense of historical profundity, as familiar Reagan-Bush era imagery crowds the screen before an on-screen title undercuts it all with the insistence that this is not that story.

Instead, ATOMIC BLONDE is how we’d like to imagine it all went down.  This is not the 80s as they were but how we would like to remember them: bathed in neon, soaked in synth, and deliriously removed from reality.  Even a profoundly significant location like Berlin is rendered into a somewhat unreal, cartoonish landscape, with its western half dominated by glitzy clubs while the grimy east rots away under the Soviets, its streets crawling with anarchic punk activists.  ATOMIC BLONDE is the simulacrum of an 80s Movie, one that could only be made now, years after this aesthetic has calcified into recognizable aesthetics,  including a somewhat predictable, stock playlist that stands in stark contrast to the personal deep cuts Wright curated for BABY DRIVER.

Call it a sampler platter if you will, but it’s one that answers the question posed by Loder: familiar though it may be, ATOMIC BLONDE is most certainly art because how else can you describe something that features Charlize Theron brawling with a group of thugs at a screening of Andrei Tarkovsky’s STALKER?