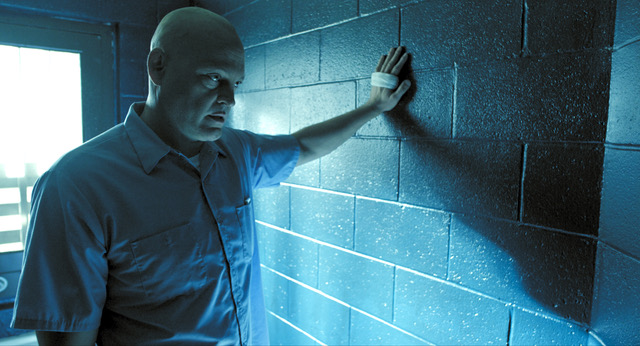 A one-man band takes on the lower depths in S. Craig Zahler’s truly dark journey to the basement below Hell. 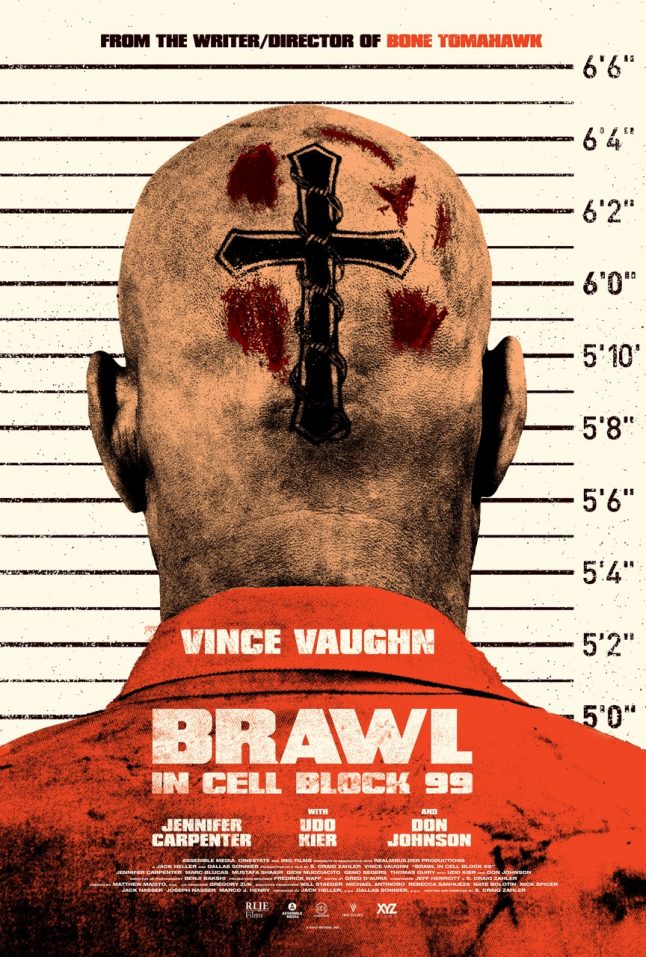 One of the more recent shining moments in theaters was the scant release of S. Craig Zahler’s BONE TOMAHAWK. A completely original Western, the film’s more horrific moments were laid out inside that frame: It wasn’t a horror film set inside the West; it was a Western, with rather uncommon indigenous foes. Here, Zahler takes the term ‘brawl’ and scrunches it up into one unique powerhouse in the form of Vince Vaughn, in an almost unrecognizable role. Bald, tattooed, and barely cracking anything close to a smile, Vaughn purely embodies a man with nothing, with nowhere to go. He’s not a machine, though. He’s a man, a person—just one with limited options. 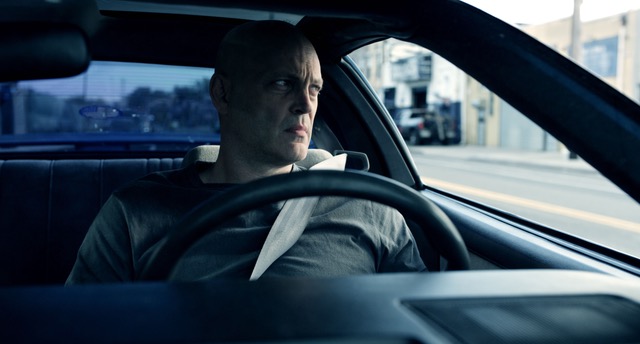 Bradley Thomas (Vaughn) is having a bad day. Losing his auto shop job, he arrives home to find out she’s been hanging with another dude. But, being a good guy, rather than smack her up he goes full Godzilla on her car, and I mean that her Toyota becomes Tokyo under his wrath. Stepping back in with smoke still coming out of his ears, Bradley decides it’s time to reconnect. 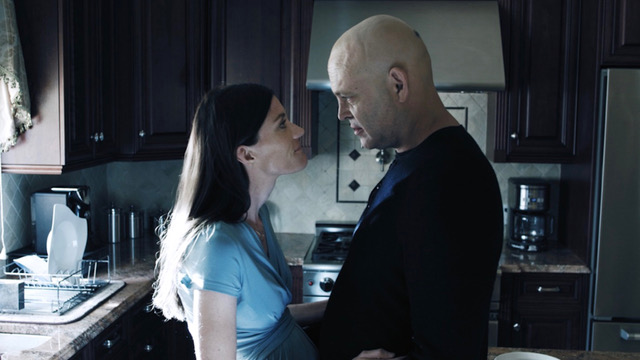 With trepid allusion to their former boozy history, and depression following her miscarriage, Bradley chooses to rebuild their marriage with the only tools he really knows. To build up some cash, he resorts to drug-running, which of course goes wrong, and due to his own particular morality, it lands him back in jail, sans wife, sans life. 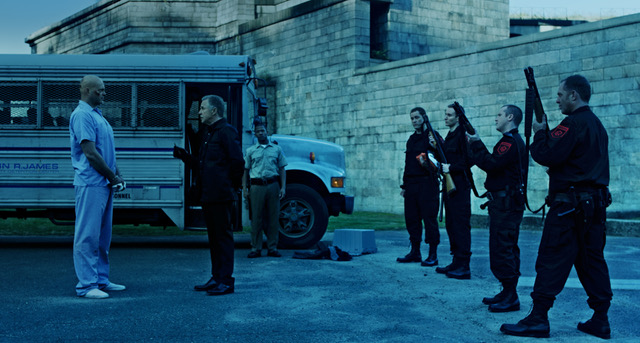 Once in the hole, the film’s bluish cast goes full-on black as scenes are lit with single sources, and what is dark goes tar-color. Bradley, who could’ve been treated as a one-note character, as he essentially is, instead gains our gaze as he coordinates in this lame world. At least his wife is okay… for a while. Once Udo Kier shows up to deliver the bad news that his wife’s been kidnapped, and in the midst of a criminal forced abortion — well, partial abortion (…) — the film takes a riveting new turn, with Bradley being given an ultimatum: get into Cell Block 99 and take out an adversary for the drug runners, or lose his wife and, at least, parts of his child. 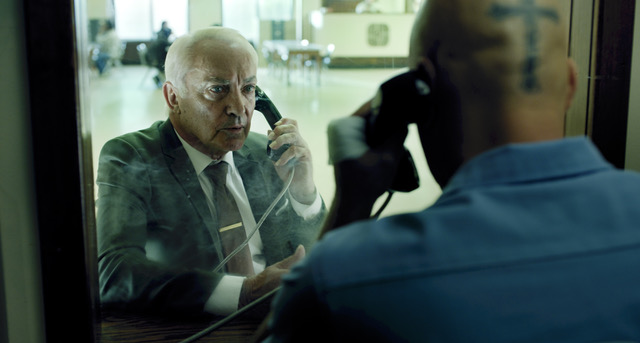 This being a Zahler film, Bradley doesn’t do the normal Hollywood thing of going ballistic while overly loud thuds and crashes thunder around the audience — instead, Bradley internalizes his course of action, and we follow his choices. To get into Cell Block 99, he’s gotta break some bones, which he does, though without casual glee or Herculean bravado. He’s a man on a mission. He can redeem himself in ways he hadn’t known before, and with Zahler guiding his internal compass, Vaughn’s Bradley is filled with a quiet rage, a determined path-driven man where down is the only way to get up. 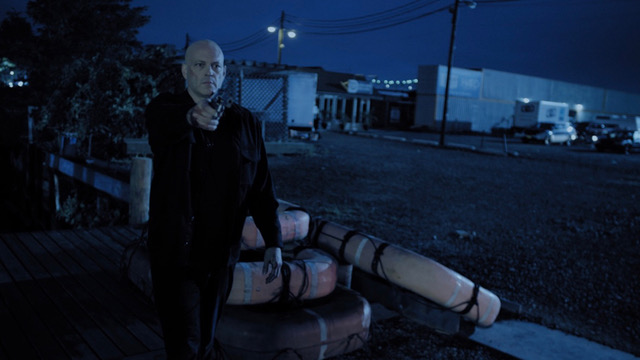 Thankfully avoiding the basic unhuman humdrum of good versus evil, we just plain go ahead and root for Bradley, even though in real life, we’d just sell the house and move out of town if he parked on our curb. He really wants to do good, and always has wanted to do good. And for a character that emits so little, he’s a bright star of wholesome goodness. When he first gets the news about his captured wife, it’s all in the eyes, and then the action. We don’t know his plan, and really, he doesn’t know where he’s going or where he’ll end up — he just knows he has to. He has to. 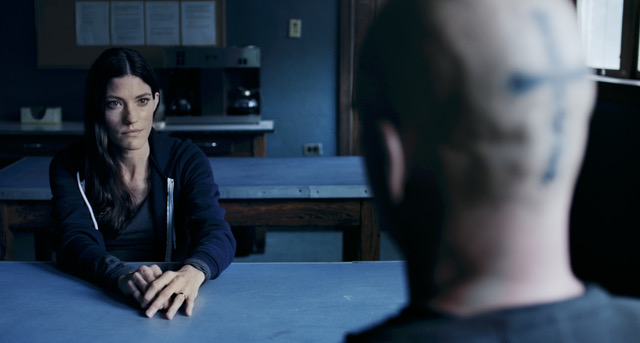 One of the many approaches that raises BRAWL IN CELL BLOCK 99 above so many generic Sylvester Stallone/ Arnold Schwarzenegger/ yadda yadda features is the approach to the violence. Over the top, sure, but believably over the top. Hearing an overly muscled action star grunt and punch with multiple sound effects just takes away from what we should be feeling. In CELL BLOCK 99, just watching Vaughn swing out is like being a Parisian at the first viewing of Arrival of a Train at La Ciotat, where you almost have to turn your head because it’s just happening in front of you—the crunches can actually be felt just by watching, and hearing. Which includes not only cracking bones but soul music composed by Zahler himself, further humanizing the brutality within these characters. They really are people, as despicable as anyone may be. 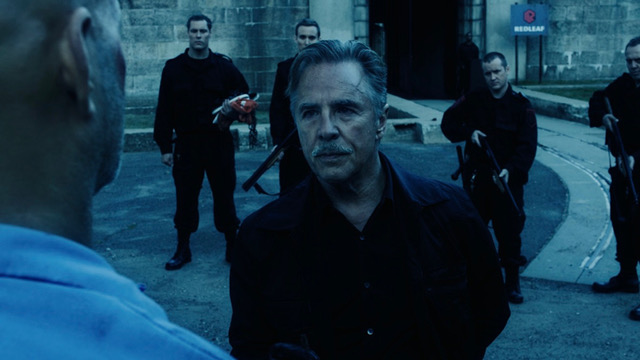 Anti-heroism is a tricky road, and Zahler and Vaughn just plain rode in the same car to get from point A to point B. It’s impossible from watching the film to figure out who did what to create this character and scenario. Vaughn never feels out of place or wrong. He’s not a comedian. He’s Bradley.  And up against every foe, including a particularly cold Don Johnson, he’s one of the most loving monsters you’ll ever encounter. Zahler’s lowbrow concatenation of bad guys, really bad guys, and super duper bad guys, just goes way way way down and never ever comes back up. Thankfully.