Carol Danvers’ Captain Marvel character has had a long, strange trip from her debut to landing into theaters this year. While Danvers originally appeared in comic books way back in 1968, but wouldn’t be known as Captain Marvel until 2012. In that span of time the character underwent massive changes to a very convoluted origin story (aren’t they all?) and adopted multiple aliases (Ms. Marvel, Binary, Warbird, Ms. Marvel again), outfits, and abilities. It wasn’t until the last decade or so that writers (Kelly Sue DeConnick, chief among them) attempted to streamline all of that continuity, settled on a specific set of superpowers, and a real solid understanding of the character’s role in the comics and her personality as a whole. This scrambled backstory before landing on solid ground is different than most of the other main heroes in the MCU thus far (with the exception of the GUARDIANS OF THE GALAXY movies). Luckily, writers Anna Boden, Ryan Fleck, and Geneva Robertson-Dworet figured out a way to create a clear throughline for Danvers’ origin and story. Unfortunately, a lot of their characterization ends up feeling flat and not as engaging. CAPTAIN MARVEL is an incredibly mixed bag with a lot of great elements butting up against weak character and thematic work. 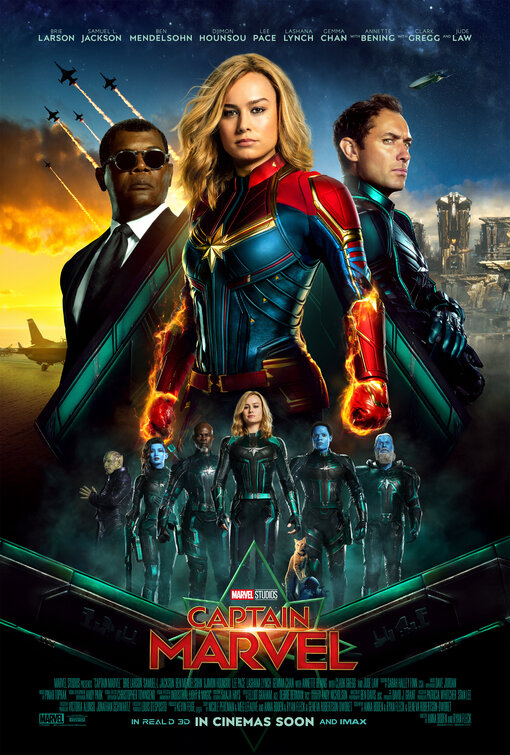 In the year 1995, on the distant planet of Hala, Veers (Brie Larson) is an amnesiac who seeks to fight with the Kree Starforce under the command of Yon-Rogg (Jude Law). Unlike her fellow soldiers (Gemma Chan, Djimon Hounsou, Rune Temte), Veers is able to shoot out energy beams from her fist—but has great difficulties controlling her emotions. She and the other Starforce members are fighting the Skrull, an alien race of shapeshifting terrorists. After protracted fight, Veers ends up on Earth, with the Skrulls in close pursuit, led by their general, Talos (Ben Mendelsohn). Veers teams up with Nick Fury (Samuel L. Jackson) to figure out the Skrulls’ plans, save the day, and learn the truth about Veers’ origin as Carol Danvers back on Earth. Also there’s a cute cat named Goose in it.

CAPTAIN MARVEL, directed by Anna Boden and Ryan Fleck, does a lot of things very well. The casting is utterly stellar with a ton of talent given good moments scattered throughout. Jackson and Mendelsohn are particularly excellent and play so well against each other. Mendelsohn possesses a great mix of menace, humor, and sympathy, while Jackson is clearly in THE LONG KISS GOODNIGHT mode and having a ball. Who knew hearing the ultimate spymaster talking with his mouth full of sandwich could be so delightful? Annette Bening as a shadowy member from Danvers’ past has some fun moments and Gemma Chan is incredibly badass as Minn-Erva. Larson is a solid actress who shines best in her moments of being charming and playing off the actors around her. She also can do righteous anger well, but for some reason it is a very bifurcated performance with these two sides never being reconciled or seeming to be part of the same character. A lot of her jokes and action quips fall flat, and while there’s a narrative arc to the character, there isn’t an emotional one. There were plenty of opportunities to build that into the film, but ultimately it’s scattershot and misses a propulsive sense of maturing that would truly engage audiences. 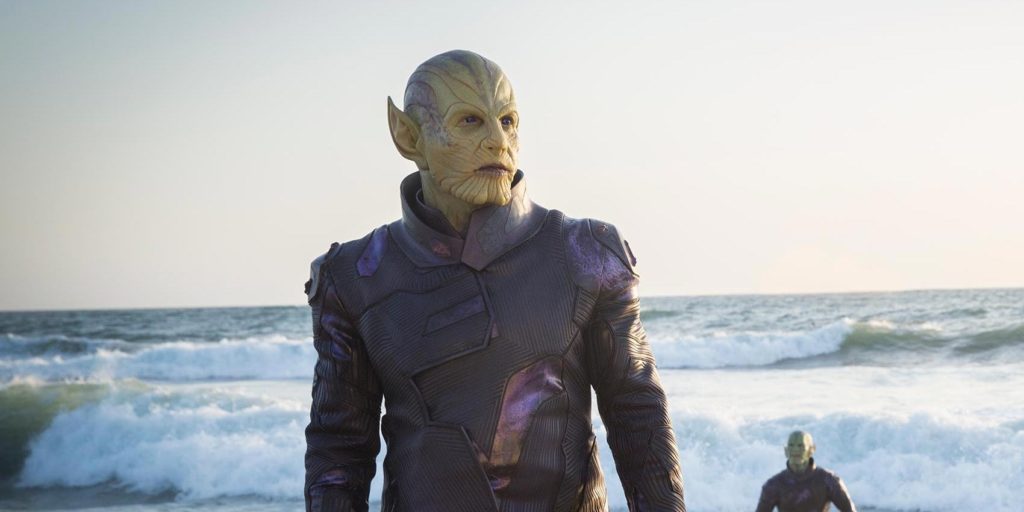 Technically, the movie is also kind of a mixed bag. It looks great, with engaging cinematography by Ben Davis and CGI that really creates an expansive galactic world for Danvers to exist within. The costume and production designs and make-up work are similarly great and do an excellent job create an interstellar world that viewers can immediately step into. But then there are far too many visual gags and callouts to “it’s the ’90s!” that it becomes groan inducing. The score by Pinar Toprak is probably one of the top five scores in any Marvel movie, with a great shift between electronic synths in the alien planets and a more melodramatic orchestra on Earth, before becoming very John Williams-y when the two worlds collide. But the needle drops of “it’s the ’90s” hits are so blatant and awkward that it doesn’t quite work. The songs are obvious choices, they are very loud in the mix, and most are meant to be nostalgic gags. The one that is mildly clever doesn’t even make sense within the context of the movie and is so underlined that it goes back to being annoying. 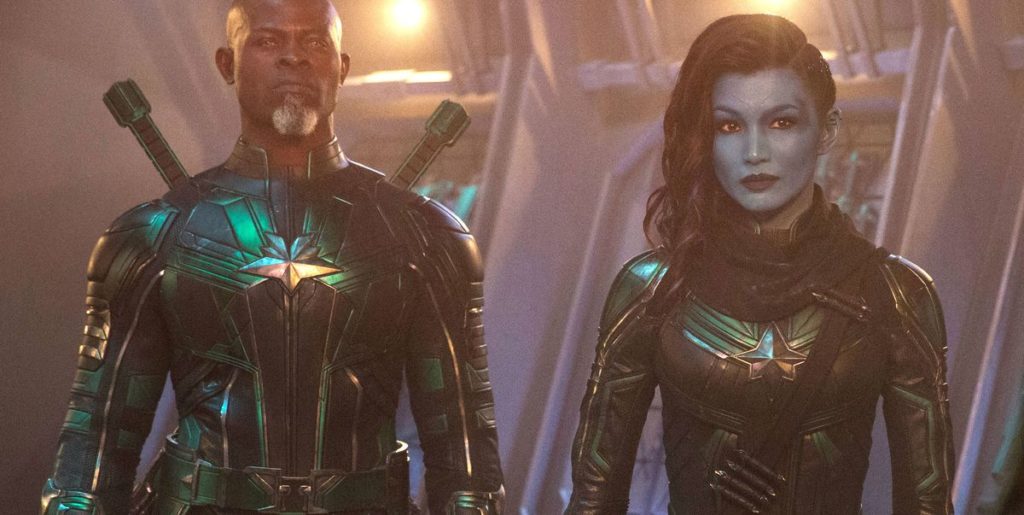 One other element about CAPTAIN MARVEL that is also a dichotomy is the fun element in the third act. Embracing her abilities and taking on villains, there is a certain glee to be had when flying around and shooting energy beams — I get that. But when she destroys ships with people on them, and literally shouts “Woo!” right after doing so…it’s just odd. That’s not to say she should be somber and sad, but it’s an odd exclamation to killing people. Obviously Marvel heroes tacitly kill people all the time, but it’s not usually done with such glee. And the arguments that it’s because she’s a warrior/soldier doesn’t make sense, compared to the fact that Captain America, Falcon, Black Widow, Hawkeye, and others are that as well. (It should be noted that I was the only one that felt this way when I asked folks after the screening; the other movie nerds – all white males – said that they would “Woo!” too if they could fly and were killing people that tried to kill them.) It’s just an odd take that could’ve been solved by using “drones” or robots or something, because it’s not like she’s a character with bloodlust or anything.

CAPTAIN MARVEL isn’t bad but it isn’t great. It has some excellent moments, terrific performances, and solid lines of dialogue. In the hands of other writers and directors, Larson will shine as the character who will better combine her modes into one well-rounded person (hopefully with much better jokes). It has a few fun “prequel” moments (taking place way before IRON MAN and THE AVENGERS), but it also has a few groan inducing prequel moments. It’s a fine and fun movie that manages to create a streamlined origin that honors the comic roots along with a mostly satisfying narrative arc. But the lack of digging deeper and giving a real emotional character arc, with a true set of goals, keeps it at a distance from the audience. It is still important and great to see such a powerful female character, who is strong yet vulnerable, that is able to be beacon of representation and inspiration for young moviegoers. And audiences should look forward to more adventures with Captain Marvel — but here’s to hoping she soars better in those.