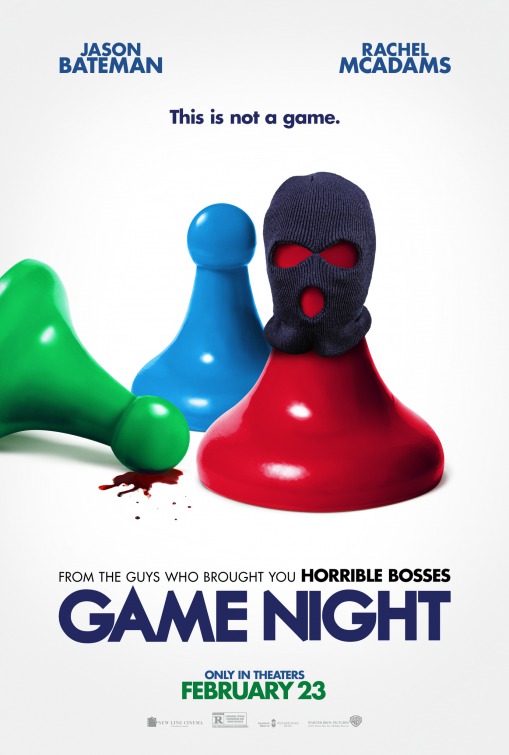 Following their atrocious direction in VACATION (2015) and their delightful writing in SPIDER-MAN: HOMECOMING (2017), John Francis Daley and Jonathan M. Goldstein return to their directing chairs for the new mystery-comedy GAME NIGHT. This film tells the story of Max (played by the always-charming Jason Bateman), Annie (Rachel McAdams), and their group of friends enjoying their weekly game night with Max’s brother Brooks (Kyle Chandler). But when things go sour as Brooks is kidnapped, the friends become wrapped up in a criminal case bigger than they could ever imagine.

The film opens with a montage of how Max and Annie met (fittingly, at a trivia night in a bar) and the first few years of their marriage. From their first scene, the chemistry between Bateman and McAdams sets the charm-bar high for the rest of the cast. Max and Annie throw a weekly game night for their friends. This depiction of adult life is surprisingly refreshing because instead of a night out at the clubs, we see a group of adults stay in, eat Tostitos, and play Life and charades. Everyone is included in these game nights except for Max and Annie’s neighbor Gary (Jesse Plemons), who is exceptionally creepy and over-dedicated to his job as a police officer. His awkward performance and the stiff environment he creates is the source of the film’s best comedic moments.

When Max’s brother Brooks (Max has always considered him to be more successful, more attractive, and more masculine than him) shows up and offers to throw a game night at his mansion, the film’s storyline starts to pick up. Brooks plans a classic “Whodunit” party – where the group must track down and find a kidnapped member. However, before the party could begin, Brooks is actually kidnapped by mobsters who have been financially wronged by him. The group, believing that this is a part of the game, let him get taken, and then they begin “playing.”

When the group splits up into three couples in attempt to find Brooks, the film follows three separate storylines. This is where the film has some trouble. With creative and original concepts written by screenwriter Mark Perez, it is a shame to see them go to waste within a beyond messy narrative. Anything besides the A-storyline following Max and Annie is effectively pointless because it offers nothing to the overarching plot of the film and contributes nothing to the relationship between Max and his brother Brooks (the importance of which is set up with over-expositional dialogue throughout the first act of the film). Even though the B (and C) storylines of the other couples offer an assortment of topical laughs, Perez is leveraging the now-relevant 2017 humor that will not likely hold up after the film’s initial release.

The themes of fragile masculinity and the importance of family are present in the story and set up properly within the character’s relationships. Unfortunately, however, the film seems to forget about the importance of these themes, as they don’t reappear and impact the characters until the end of the film. Everything in between is a meandering storyline that follows one set of events by another set of events and so on – as the film focuses more on thrillingly absurd plot points and comedy, than weaving important character growth into the story. Because of this, the film’s pacing feels tremendously uneven – making the movie feel a good thirty minutes longer than it actually is.

With that being said, GAME NIGHT still showcases some great performances and eye-catching visuals. Jason Bateman has a firm grip on his character in every scene. His performances in comedic roles are always so addicting to watch, and regardless of any outrageousness that Bateman’s character finds himself in, he stays committed and dedicated to the role. Bateman’s screen chemistry alongside Rachel McAdams is directed perfectly, as they are able to comedically bounce off each other as husband and wife. Their snarky and fun relationship is the most believable relationship in the film. As the film progresses, the group seeks help from the off-putting neighbor Gary. Jesse Plemons nails this character as he elevates the “that one neighbor” archetype to an absurd new level. He steals every scene he is in\.

As I said earlier, Mark Perez’s screenplay is extremely self aware – which is both a blessing and a curse. On one hand, the self-awareness is too on-the-nose, as it renders many sequences inconsequential because all tension and anxiety is stripped from the scene. On the other hand, however, the utilization of timely and topical humor asks the audience not to take things too seriously, as the film grants itself a light-hearted tone. This tone is perfectly visualized by cinematographer Barry Peterson. Peterson, having worked on 22 JUMP STREET and CENTRAL INTELLIGENCE, exudes his comfortability with this genre. In staying true to the core idea of the film, Peterson is able to create board-game-inspired compositions. These are best seen during the transitions and in the car chase sequences. Shockingly, he is able to implement this style into simple dialogue scenes as well. By depicting every character, car, and neighborhood as pieces on a board game, Peterson elevates the self-awareness found in Perez’s script.

Even with creative cinematography, fun performances and chemistry, and an overly preposterous narrative, GAME NIGHT fails in delivering a human story. Just like the board-game-inspired visuals suggest, the characters in this film are better depicted as pawns in a sinuous game, rather than as fleshed-out humans that can exist off-camera. Because of this (and the addition of tedious support plotlines), GAME NIGHT isn’t as compelling in practice as it is conceived, leaving audiences with nothing to connect to.