Eric Stanze has been a major force in American independent/underground horror for over two decades now, kicking off his filmmaking career with SAVAGE HARVEST in 1994. His early work in particular was brutal and raw, cementing his reputation for pushing boundaries and wild ambition with the one-two punch of ICE FROM THE SUN (a horror/fantasy epic shot on Super 8) in 1999 and SCRAPBOOK (a notoriously grueling two-hander detailing the harrowing experience of a young woman held captive by a serial killer) in 2000. That ambition really took center stage in 2007’s DEADWOOD PARK, which uses an almost novelistic approach to tell a story that spans decades about horrors in a dying small town. It’s an impressive piece of work, and Stanze’s follow-up RATLINE (2011) was a more modest (but considerably more gruesome) affair. It’s hard to believe it’s been seven years since his last feature, but his new film IN MEMORY OF has been well worth the wait. 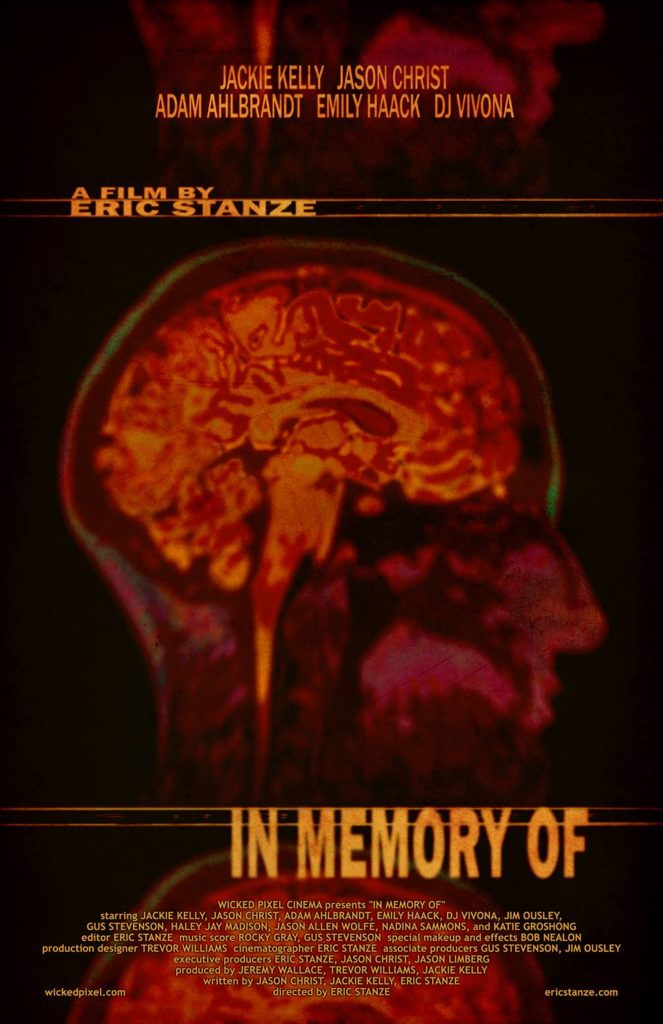 Amber Sheridan (Jackie Kelly) suffers from a rare disease that causes severe neurological and physical deterioration, and while she has not exhibited any major symptoms she agrees to take part in a clinical study for a potential treatment. But something goes disastrously wrong, and Amber suddenly finds herself waking up in a pool of blood with her fellow test subjects dead all around her. As she tries to piece together what has happened, the head of the study Simon (Jason Christ) appears and sends her on a mission to find something that has gone missing in her mind following the treatment. Amber sets out on a surreal odyssey across the country, sent from one roadside motel to another while her sense of reality and time becomes more and more fractured. Haunted by memories of her life with abusive boyfriend Darren (Adam Ahlbrandt) and ghosts of her fellow test subjects which may be more real than she would like to believe, Amber must complete her journey before she goes completely, irretrievably mad.

From what little information Stanze had released about the film prior to its completion, it was tough to figure out what exactly IN MEMORY OF would be. As it happens, it’s something of a nightmarish “road trip” movie–TWO-LANE BLACKTOP in particular is specifically referenced in one of the film’s dizzying number of locations. Shooting the film across six states (Arizona, Missouri, New Mexico, Oklahoma, Texas, and Utah) makes for an impressively detailed picture of small-town American decay as seen through the windows of Amber’s car. There are endless fields, abandoned businesses, decrepit motels, and strange people who may not be ghosts or hallucinations but perform more or less the same function in Amber’s warped perception. It’s the most sprawling of a loose movement of recent horror films that use effective location shooting in so-called “flyover country” to explore the tensions and fears of small-town America, including Nicholas Bushman’s UNION FURNACE (2015) and Toni Comas’s INDIANA. Amber’s interactions with Darren underline their financial concerns, and from what the viewer can piece together of her past it’s clear that Amber has had more than her share of humiliation trying to scrape by. 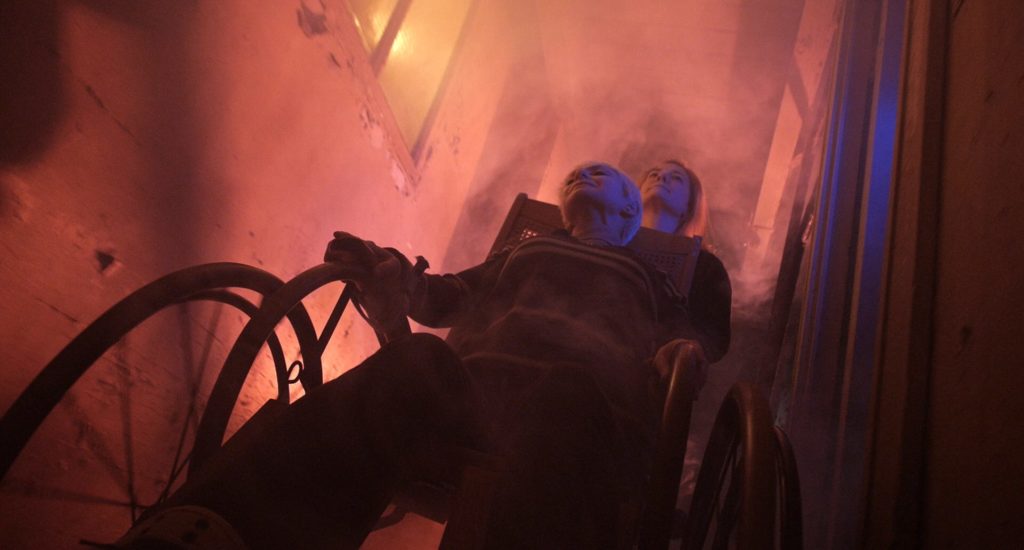 All that said, IN MEMORY OF is hardly a “kitchen sink” drama. It’s packed with unsettling, hallucinatory imagery and lapses in time and space that graphically illustrate the breakdown of Amber’s mental state. Stanze and his stars/co-writers Jason Christ and Jackie Kelly deploy an impressive range of cinematic tricks to keep the viewer off-balance, ranging from simple but effective flourishes to full-on horror set pieces. One character appears to change from one person to another mid-conversation and Amber frequently finds herself in conversation with people alive and dead who may not be there, reminiscent of Robert Altman’s approach to depicting Susannah York’s character’s psychotic break in IMAGES. In other scenes, Amber revisits the past in garishly-colored nightmare flashbacks reminiscent of Mario Bava, but with the explicit gore and shocking imagery more associated with the modern underground horror in which Stanze has established himself as such a prominent voice. Visually, IN MEMORY OF is absolutely stunning, and its elaborate sound design and creepy score is excellent.

No film is perfect, however, and IN MEMORY OF is no exception. At just over two hours, its dream-logic narrative may try the patience of some viewers. Stanze is no stranger to longer run times, but this is his longest film, and there’s a lot to digest here. It can be an overwhelming sensory experience, which can be a positive or a negative depending on what a particular viewer is looking for at a given moment. The cast is great — Jackie Kelly is in nearly every single frame of the movie and carries it ably, while Haley Madison does the best work she’s done to date in a small supporting role that nonetheless makes quite an impression — but there are a few fleeting moments of awkward fight choreography that are a little distracting. Maybe the biggest problem is that after how thoroughly all the characters and the viewer are put through the wringer during the film’s running time, the ending comes as something of an anticlimax. Although honestly, as out-there as the rest of the movie is it’s tough to imagine where else it could have gone. 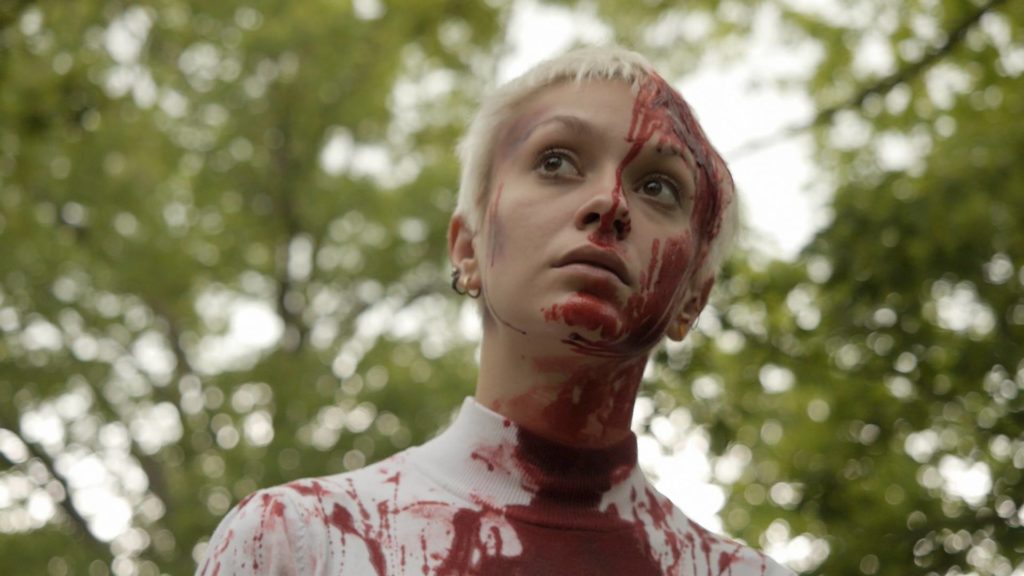 Minor complaints aside, IN MEMORY OF is another standout feature from one of the most interesting filmmakers in modern independent horror. Stanze’s evolution from super low-budget shock artist to genuine horror auteur has been exciting to follow, and it’s not many filmmakers who would be swinging for the fences like this nearly twenty-five years into their career. Catching up on Stanze’s previous work should be a priority for any indie horror aficionado who hasn’t done so already, and that can be done by Wicked Pixel Cinema’s official site. Stay tuned to Wicked Pixel on Twitter and Facebook for the most up-to-date information on the release of IN MEMORY OF and don’t miss it if it screens near you. This one’s probably a hell of an experience on the big screen!