I never liked TERMINATOR 2: JUDGMENT DAY. The main message of the first film is that you cannot use time travel to change the present. If you had gone to the past, that would mean that you would’ve already been a part of the timeline from the beginning. In the first film, the attempt on John Connor’s life is the chain reaction that causes his existence. If the T-800 had not been sent back to the eighties to kill John Connor, then Kyle Reese would’ve never been sent to stop him. Without the good old Mister Reese arriving to confess his love to Sarah Connor, John would never exist. That was kind of the whole point of the film: The future and the past work together like a well-oiled machine. Any time travel would’ve accounted for itself in the ultimate timeline. The second film changed all of this, and, for me, kind of ruined things. The subsequent films were a mixed bag that only became worse as you reached closer to its bottom. For all of the flaws of its predecessors and all of the flaws of its own, TERMINATOR: DARK FATE manages to take the struggling franchise in a bold and unexpected direction, albeit one that is somewhat familiar. 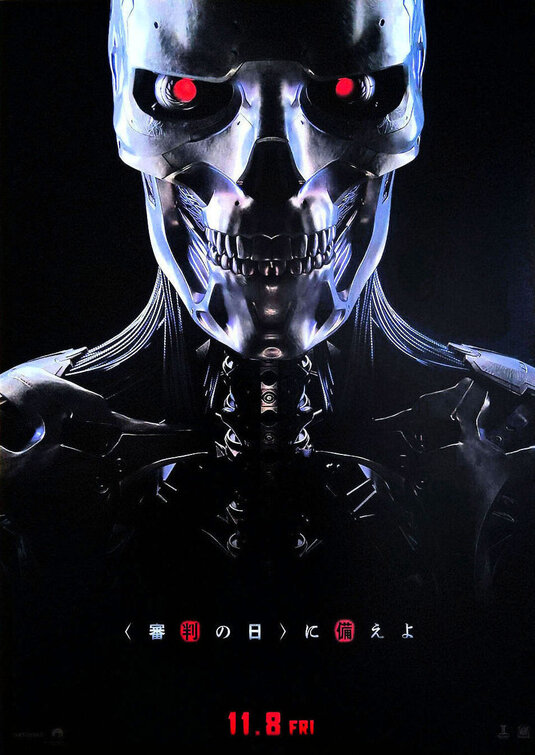 After a horribly unenjoyable and terribly misplaced opening sequence, our new hero, a cybernetically enhanced human somewhat appropriately named Grace, arrives from the future to a world where Skynet simply doesn’t exist. In this current present, the efforts of the Connors and the reprogrammed T-800 seemingly averted the machines’ intended plans for humanity. Life is exactly as we know it now in our own reality, yet there she is, from the future — a quite different one than previously imagined, at that. Simultaneously, a new “Terminator” arrives, in the form of our usually expected liquid-metal shapeshifting life-node with one odd, or should I say even, exception — It can split itself into two independently operating halves: One endoskeleton, and one shapeshifting.

In the absence of Skynet, we now have a new future, and with a new future, we have a new future war. All wars have their heroes, and our future hero, our future “John Connor,” is an intelligent yet naive young woman, Daniella Ramos. Appalled that her brother’s job is being replaced by a typical industrial robot, it almost seems too convenient that she’s our future saviour. Not that she has much time to do anything about it, as the fight for her life begins right then and there. Grace shows up in the typical way we have come to expect in this series: Just in time to hold off the killing machine from the future with everything sans the expected line, “Come with me if you want to live.” It takes very little time at all for a battle-weary and very much in control Sarah Connor to arrive. Shortly after the events of TERMINATOR 2, Sarah has been getting messages from an unknown source every single time a machine shows up from the future, with each message ending with a reference to her son. If you thought she was a badass last time around, think again. Here she is an internationally-known wanted fugitive, complicating our unlikely trio’s process of anonymity. As if evading this new “Terminator” wasn’t enough, their only way of finding the source of Sarah’s unknown messages involves crossing the Mexican border into the United States. While the film never becomes overtly political, it certainly “goes there” in regards to current events.

After four sequels of mixed quality, this sixth entry is satisfying in a somewhat unique way. While we all know how I feel about the second film, during the making of the first, JAMES CAMERON didn’t yet seem to fully be the great filmmaker that we now know him as. Remember the five-minute scene of Sarah Connor’s roommate lip-syncing to a Walkman while using using a celery stick as a faux-microphone? Yeah. That’s what I’m talking about. To me, this is the first Terminator film to really feel like a JAMES CAMERON piece, despite being directed by TIM MILLER, under the mere guidance of Cameron. As with all Cameron films, there are heavy themes and deeper meanings layered underneath most everything. The third, fourth, and fifth Terminator films have very little of this, and are pretty much just a bunch of stuff happening. Cameron’s films have always had well-realized female characters; either strong female characters or weak ones who become strong by the end of the film. Here we have three distinct variations of the two, and the dynamics between them work exceptionally well. It doesn’t even seem to occur to the viewer that all three main characters are women, and nor should it. This isn’t a “female version” of anything. This is quite simply a science fiction story that just so happens to have female leads. Our supporting character isn’t so shabby either. Not to give the film’s circumstances away, but ARNOLD SCHWARZENEGGER is playing a totally different character than you might think, and it makes all the difference. After the second film, the character is played pretty much exactly the same, more or less. It’s refreshing to see progression in any character, let alone in one where you don’t expect such progression.

If I have any problem with the film, it’s the first scene. It seems to play only for shock value and is pretty damn upsetting, to say the least. When the occurrence is eventually brought up to the characters later in the film, it’s simply not as shocking as it could’ve been if the viewer hadn’t have had known either. Even a flashback would’ve been better than having such an impactful reveal as the first scene. Don’t get me wrong: I really really liked this film, but I saw nearly every twist coming a mile away, and had the first scene been omitted, I may not have. While it doesn’t solve my problem with the second film, it moves the story forward in a way I didn’t expect it to. It might even be my favorite film in the franchise.