Back in June of 1979, the folks of Crystal Lake, New Jersey largely ignored the warnings of a town drunk named Ralph, whose ravings warned folks about the local summer camp with a murderous past. The camp has a death curse, he warned, and though his ramblings were shrugged off as those of a tee-tolling loon, he was right after all. A lot of people fell victim to the various sharp implements wielded by one of the camp’s former staff – a mother who was seeking revenge for the loss of her child. This is the seed from which the seventh episode (written by John J. Gray) of American Horror Story: 1984, “The Lady in White,” springs up—namely just what happens when the psychic pain of a grieving mother showers forth in waves, changing the physical and spiritual landscape for the living and the dead, giving the actors herein a whole lot of meaty material to work with under the assured fast-paced direction of music video veteran Liz Friedlander, who captures the close-quarters quarrels with some violent flair.

I thought that the show would wave over the logistics of why the dead were stuck to the property, forced to live their undead lives in purgatory. It would’ve been fine, but the show not only gave us the reason why, it made it make sense on a grief-bearing level. The cold open send us careening into the past, specifically 1948 when Camp Redwood went under the moniker Camp Golden Star. These five minutes pay homage to two summer camp horror classics, FRIDAY THE 13TH and SLEEPAWAY CAMP. The FRIDAY THE 13TH reference is plain as day – a doting mother loses a child to the lake at the camp where she works at as a cook. Hell, the counselors were even off snogging while the kid bit the big one! The SLEEPAWAY CAMP-ness of it all comes from the fact that poor Bobby Richter was chewed up by the propellers of a boat (why was the boat even on a lake where kids swim?), divulging that Benjamin Richter has had a terrible lot in life even before he was marked as the fall guy for a butcher and had his wife murdered. Being blamed for your brother’s untimely death? That’ll mess you up. 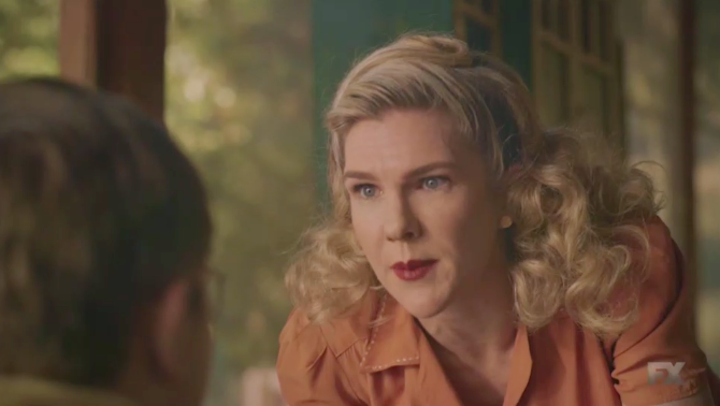 See, Richter’s mother, Lavinia (played with rabid, disquieting menace by returning AHS cast member Lily Rabe), worked at the summer cap during those years, as a way to put food on the table and get cheap childcare in the process. She doted on one child (Bobby) but not the other, Benjamin. When they’re sent to the lake to get out from under her, Bobby goes into the lake and in short order, ends up in a body bag. Lavinia flies into a rage upon seeing her dead child, howling like a wounded animal at all around her, casting blame this way and that. It’s a sobering scene to watch, extremely well-acted and finally for all of us slasher fans, gives us the “deleted scene” we never got when Mrs. Voorhees learns of her own son’s drowning. All of this grief from poor Mrs. Richter formed some mystical, magical blood curse on the camp, leaving anyone who dies on the property to be stuck there forever, tormented by her ghost—the titular Lady in White who is off hunting Montana and her gaggle of ghosts—themselves prepping for a bloodbath when Margaret’s festival at Camp Redwood starts up.

There are some nifty twists buried within the episode, one being that, like Mrs. Voorhees, Mrs. Richter went on her own murder spree (the camp should be condemned by this point, right?) and as she went to murder Benjamin, he defended himself and ran her through with a blade leaving her to haunt the camp. The scene where Jingles (John Carroll Lynch) is confronted literally by the ghost of his past is so melodramatic, it feels Shakespearean. Rabe is already an angelic beauty, so to see her floating around this condemned cabin, whipsawing from anger to melancholy over the death of her beloved Bobby feels so grandiose and operatic. It would feel over the top if it weren’t rooted in deep, personal hurt and grounded by the two electric performances from Rabe and Carroll. The brutal way she looks upon him as if he were nothing to her is grim. It’s during this scene that they reveal that Mrs. Richter has been floating around for the entirety of the camp massacre and that it was she who urged Margaret on to commit the massacre in 1974. Completing this Lady Macbeth performance, she goads Jingles into killing himself so that he can end Ramirez once and for all. The past haunts the present for everyone here, like Jingles killing his mother to defend himself, so did Brooke killing Montana to defend herself (though more enthusiastically). 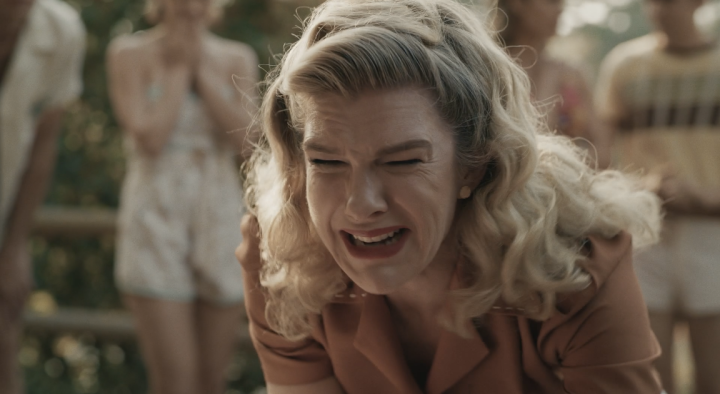 In the present, the writer catches us up with Brooke (Emma Roberts) and Donna (Angelica Ross) after the former’s aborted execution., and clues us in on just how Donna faked the execution – she used a chemical called Baclofen, which simulates brain damage and leads the two women to forge an unlikely bond as Brooke struggles to detox from the drug and face the nightmares of the trauma at Camp Redwood and her five years in the clink.Sounds like uplifting material, right? The episode’s dark, oppressive tone thankfully allows for moments of light spiritedness, such as the scene where Brooke and Donna hit up a roller rink and skate around to the tune of “Armageddon It” by Def Leppard, flaunting their foxy looks like the two most glamorous dames at the discotheque, with Brooke/Roberts causing my heart to skip a beat in her corset with high-waisted jeans. Black hair, pale skin and eighties fashion are what I look for in my final girl, I guess (she’s dressed like Tina from HALLOWEEN 5, which explains a lot about why I defend that character).

All good things must come to an end though, as Donna and Brooke pick up a crazy hitchhiker, Bruce, played with toxic ooze by Dylan McDermott, who is revealed to be appropriating Ramirez (and Ted Bundy’s) kill streak. The reveal that he’s off the reservation comes a short while later (thankfully the show doesn’t string it along), but his interactions with the women almost entirely is charged with a the sinister presence of a strange man essentially forcing his way into their lives reeks of the way men treat women in 2019. What follows is a snippet of something straight out of THE HITCHER, with McDermott mostly flexing his acting muscles as a menacing, but not quite there appropriation of OG Rutger Hauer. McDermott eighty-sixes two innocent bystanders before crashing back into the two women’s life, and forcing Brooke at gunpoint to drag Donna behind the wheel of a truck that he stole from one of his victims (which is a classless, tacky thing of unfortunate racial connotation). Fortunately, Brooke and Donna get their way out unscathed, leaving Bruce mutilated and injured, chained up on the side of the road, promising that they much finish what was started at the camp. 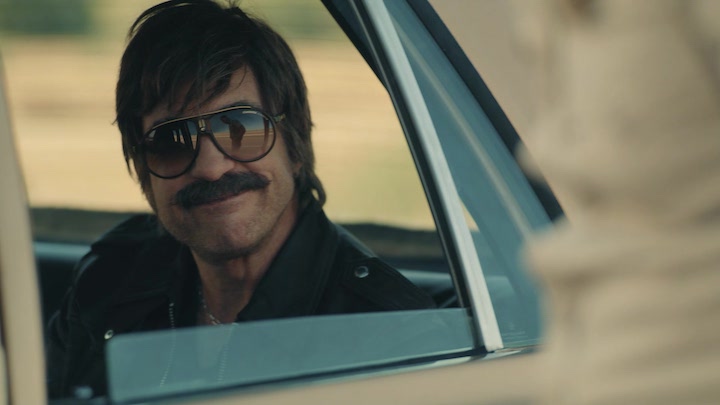 And lest we forget, there’s still Margaret’s show at Camp Redwood, which is turning into a slapdash sham along the likes of Fyre Festival – Margaret spitting out to give the fest-goers “Wonder Bread and a Dixie Cup of water” certainly cements that notion, a cheap meal for the customers. Not content to undermine the wilding out of having Matthew Morrison’s Trevor hook up with Montana as the episode comes to a close, Ramirez shows up and cuts through the band Kajagoogoo, leaving these one hit wonders deader than a doornail. R.I.P.D Limahl. With a few episodes left, I don’t even know what will go down, but surely enough it’s going to be insane, bloody and fun.