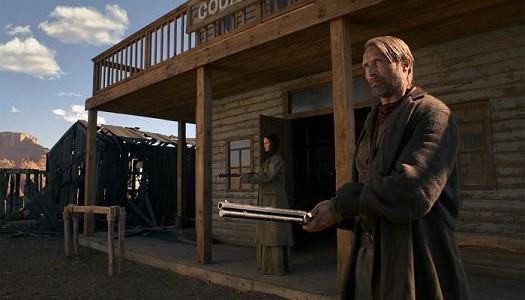 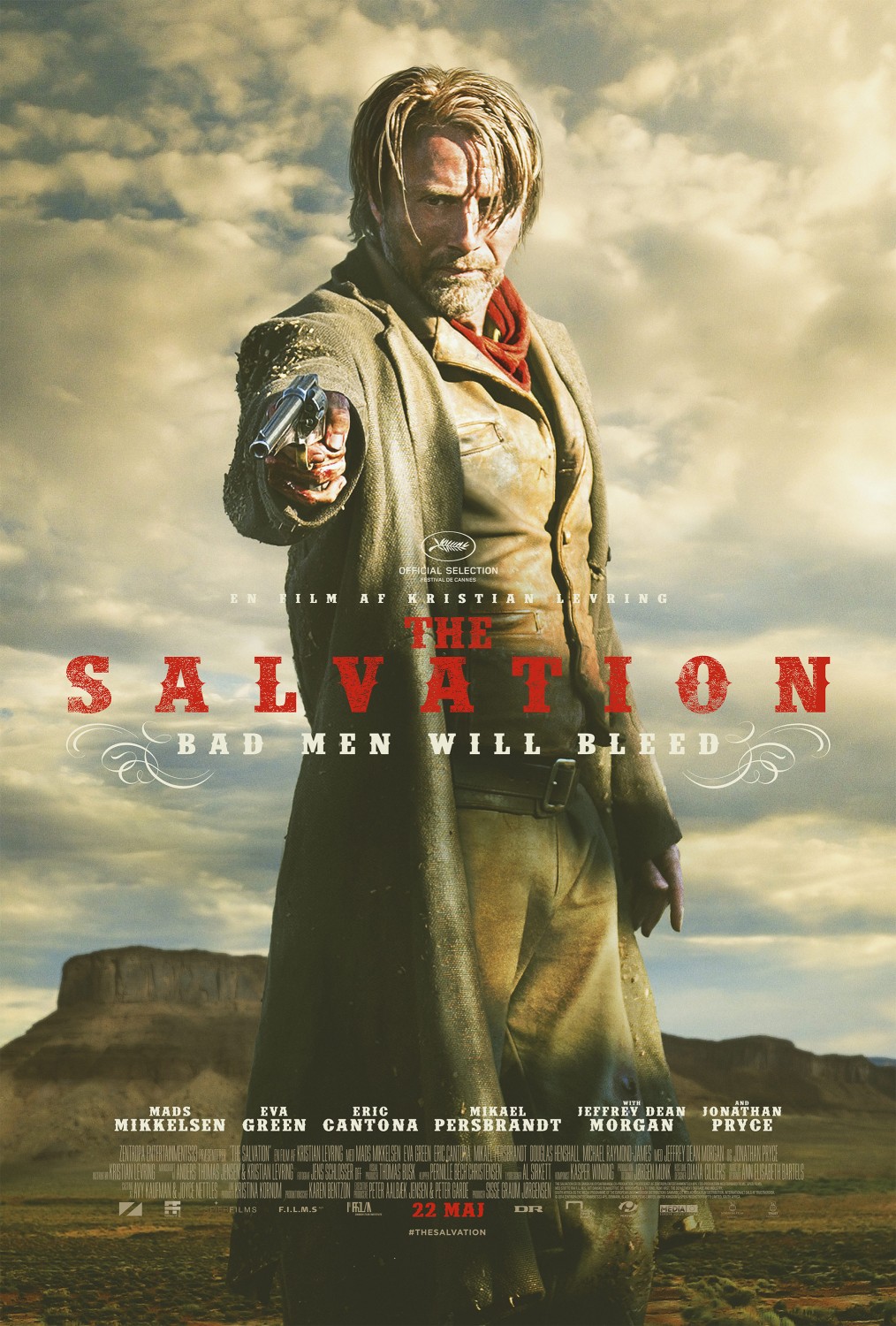 Westerns are hard to come by these days. Why make a Western when you can explore the exact same themes—revenge, modernity, survival—in a post-apocalyptic setting and have investors ask considerably fewer questions? THE SALVATION not only thumbs its nose at contemporary trends, it does so by returning to a very specific type of revenge Western made popular in the 1960s. Had the filmmakers not made one terrible, terrible choice—and we’ll get to that in a minute—this might have been the movie to put low-budget Westerns back on the map.

After seven years alone in the American west, Jon (Mads Mikkelsen) and his brother Peter (Mikael Persbrandt) are looking forward to welcoming Jon’s family to America. The two brothers—ex-soldiers who moved to America at the end of the Franco-Prussian war—have carved out a place for themselves as hunters and trappers for a nearby small town. All of this changes when Jon and his family have the misfortune of sharing a coach with the brother of Delarue (Jeffrey Dean Morgan), a local warlord who made his name killing Native Americans in the army. Delarue’s brother turns violent, and before Jon can do anything, both his wife and his young son are dead. 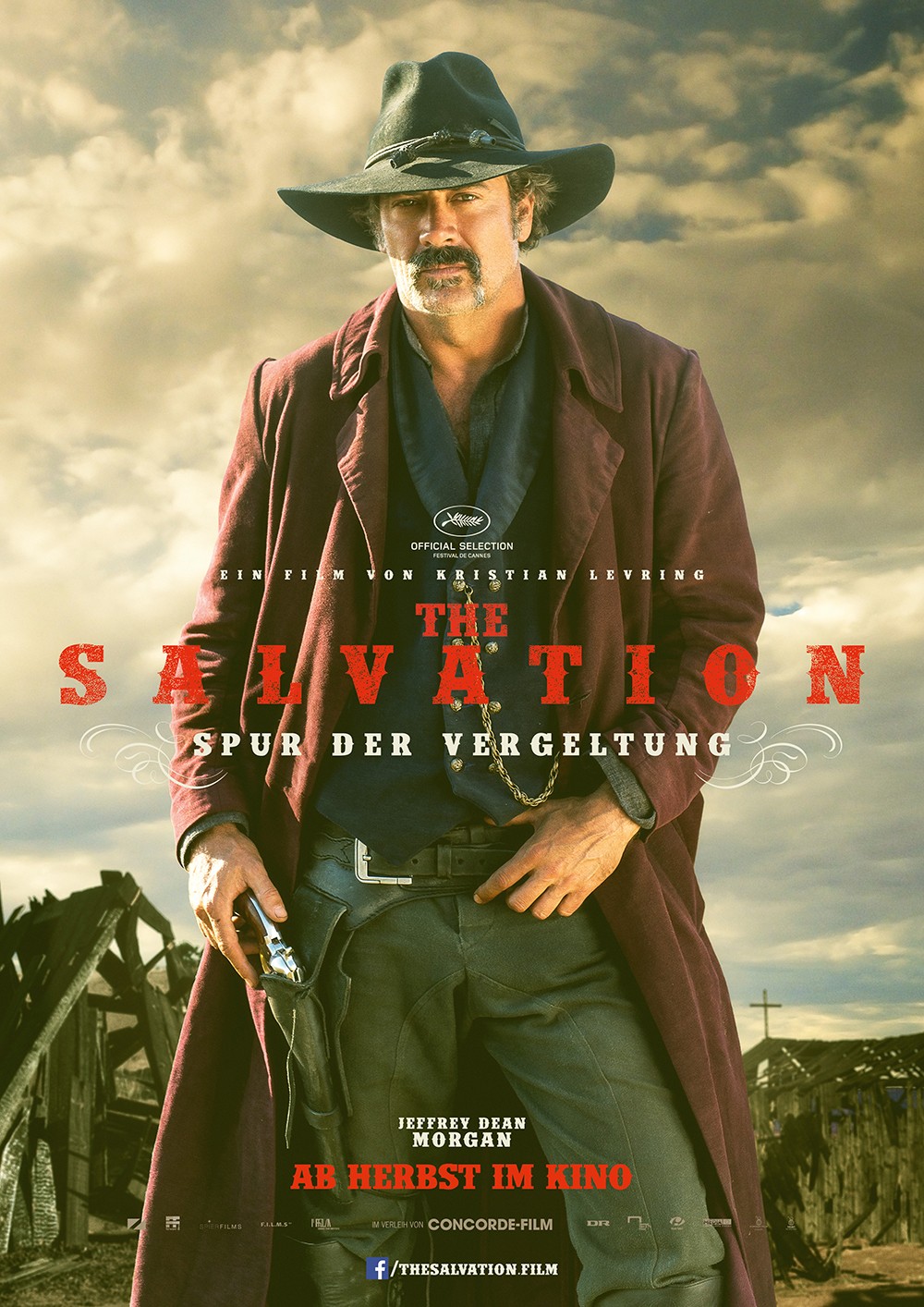 Jon tracks and kills Delarue’s brother before returning home to bury his wife and child. Furious, Delarue issues an ultimatum to Mayor Keane (Jonathan Pryce), raising his taxes and murdering one of the townsfolk for every man that he’s lost. The fight between Jon and Delarue quickly escalates into a war between the two sides, brothers and gunslingers, a war that might be won with the help of Madelaine (Eva Green), Delarue’s mute accountant and prisoner. 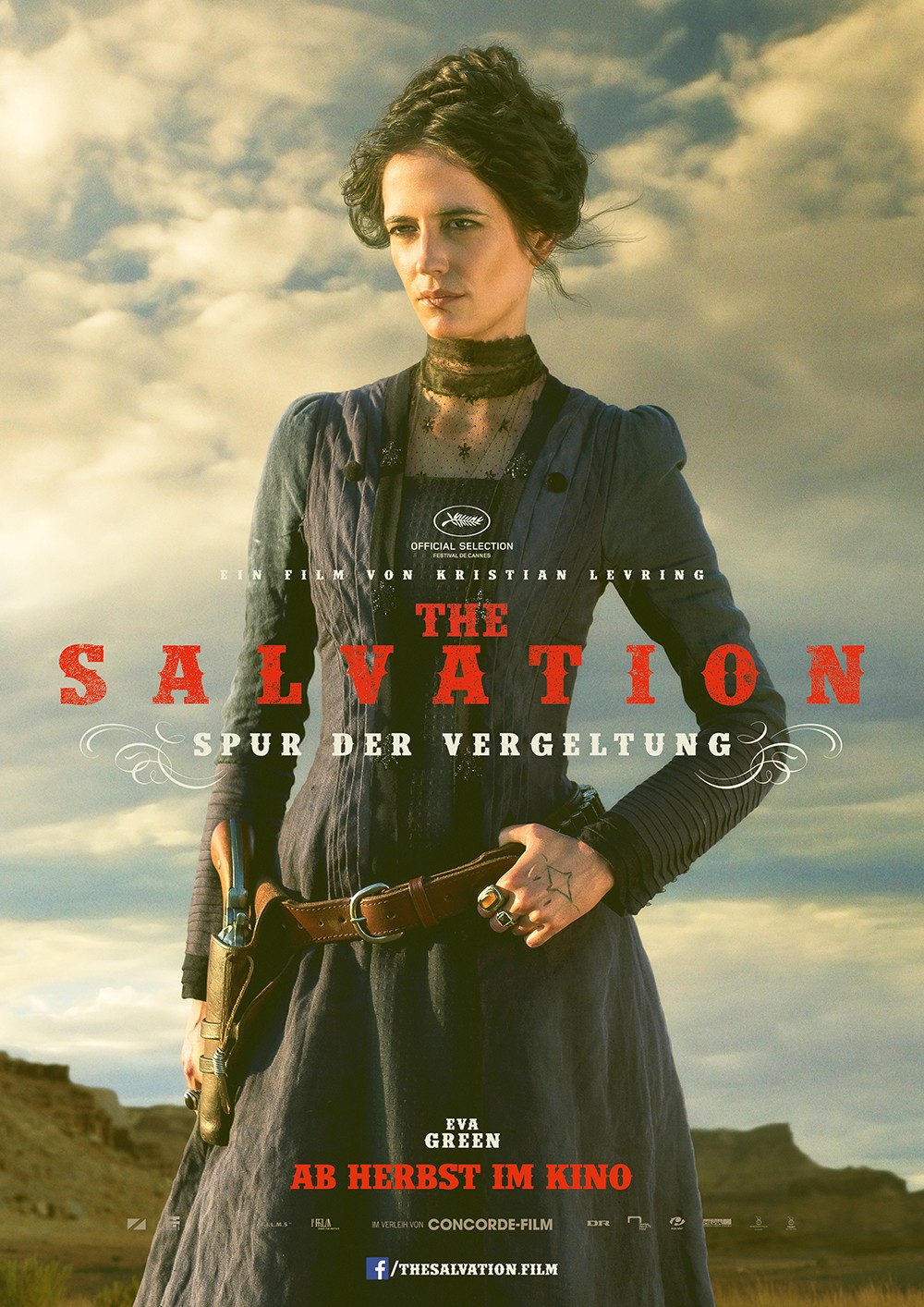 Despite the fact that revisionist Westerns were often an international affair—shot in Italy or Mexico and featuring local actors in supporting roles—many of these films promoted the idea of a homogenous America that did not exist. According to the 1870 census, one in every seven people in the country were born outside the United States; over four million people immigrated from Europe alone. This diversity rarely finds its way onto the screen. The vast majority of the characters in Westerns are depicted as naturalized Americans. They possess no accents and rarely speak a second language; geographic diversity takes the form of east vs. west or north vs. south, always within the context of North America.

By showing a version of the west that does include first-generation Americans, THE SALVATION touches on issues of immigration and otherness that are both timely and welcome. Best of all, the screenwriters know enough not to underline these themes. Jon and his brother are offset from the people around them by the film’s geography—the fact that the two men live a day’s ride outside of town—and the very dialogue itself. The clipped nature of Mikkelsen’s English plays against the lazy rumble of Jeffrey Dean Morgan’s voice, reminding us of who is meant to belong in the American west with every line of dialogue. Perhaps Jon’s family was not a target specifically because of their immigrant status, but THE SALVATION does not hide the fact that their status helped escalate the conflict. 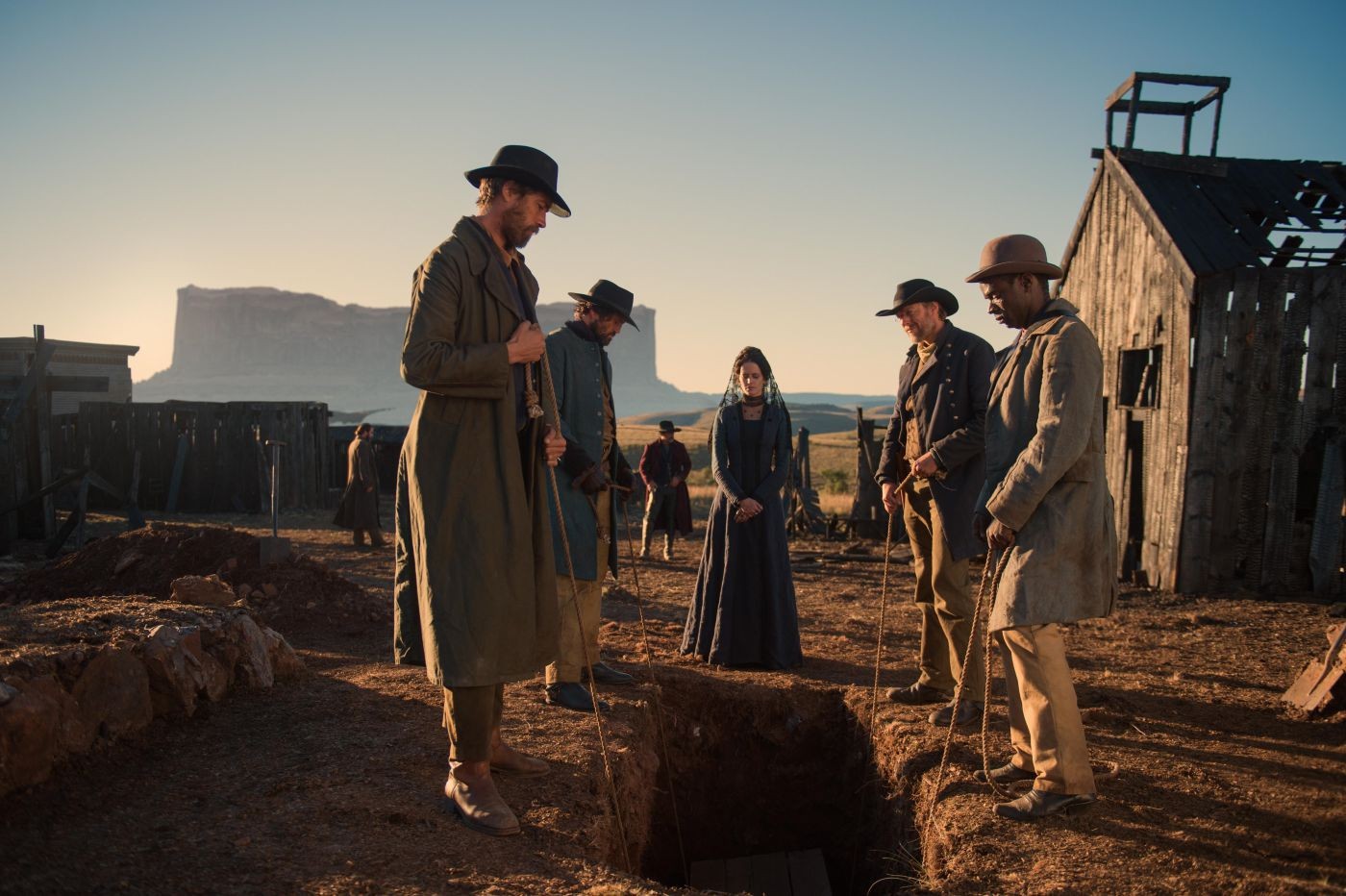 And once THE SALVATION brings the fight to the forefront, the film takes on all the characteristics of a revenge Western, albeit one with two of the most intense actors working in film and television today. Mikkelsen and Green may be best known to mainstream audiences for their villainous turns in HANNIBAL and the 300 sequel, but one thing both actors share is the ability to imbue their characters with a presence that is missing—perhaps intentionally—from the screenplay. Green’s character in particular is crafted entirely through the performance of the actor. Only a scant few pieces of information regarding her captivity and status as a child bride are given by Morgan’s Delarue. For many actresses, Madelaine would be a victim or, worse, a non-entity. For Green, she’s a caged animal, prowling around the edges of the main conflict and waiting for her opportunity to bite her captor. 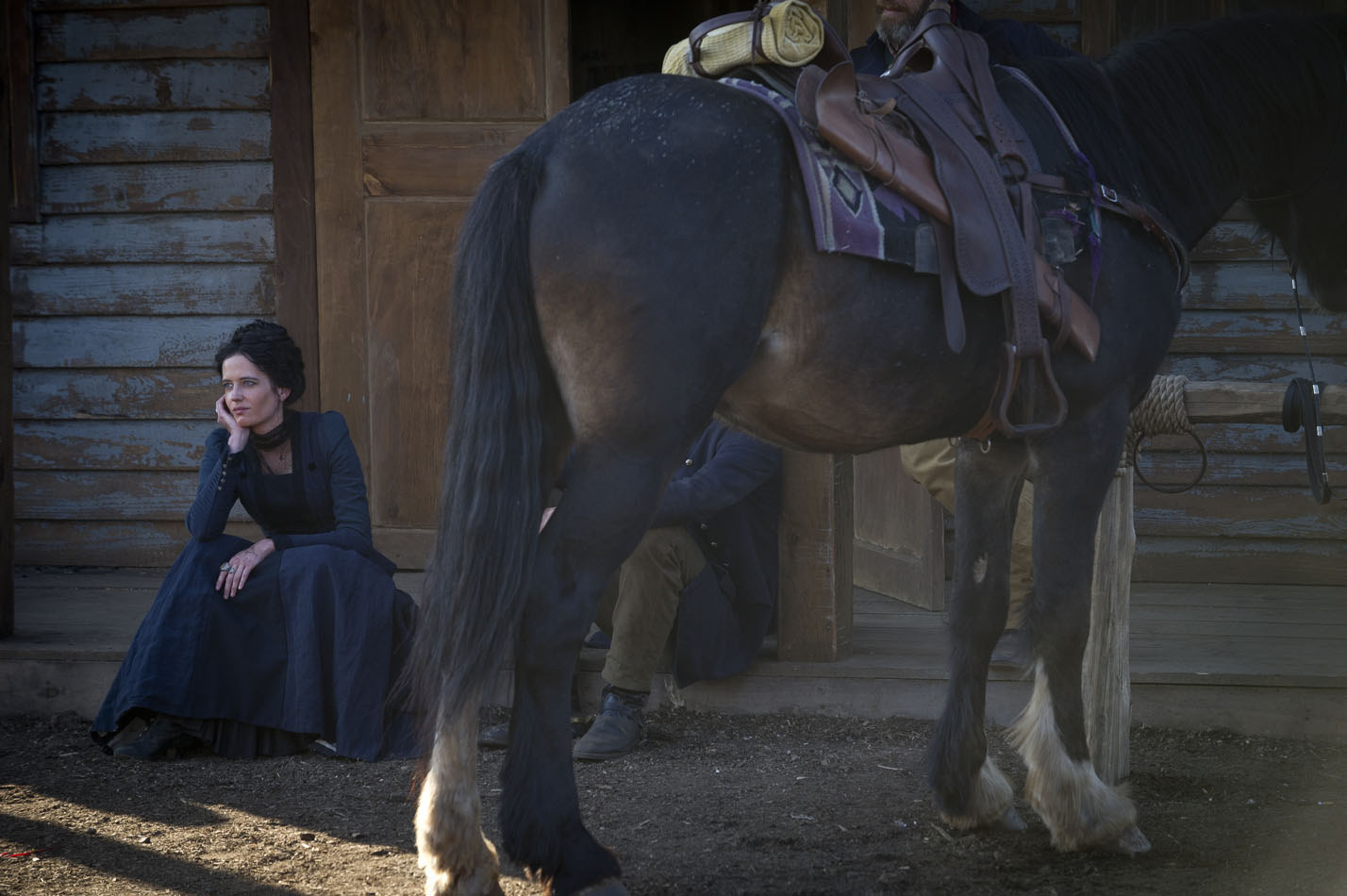 None of this breaks new ground for the Western genre, but then again, none of it has to; there is plenty of room for films that combine a lean narrative with strong performances and a measurable respect for their predecessors. What weakens THE SALVATION—what damn-near cripples the film—is its baffling reliance on CGI. Many of the shots feature noticeable digital composites; dirt paths unevenly merge with sweeping plains to create backgrounds that look and feel inorganic. When the film closes in on the action for fight sequences, we are treated to obvious computer-generated blood splatter and bullet holes. Certainly, the decision of the filmmakers to shoot in South Africa would make it difficult to recreate the American west without some clever editing and perhaps a few subtle computer tricks, but why go for such a whole-sale approach? Period films like Westerns thrive on their natural environments. Many show the United States as a country on the verge of a technological revolution. Characters are defined by their reactions to an impending modernism that is sweeping the country; any anachronisms, diegetic or otherwise, disrupt the film both aesthetically and thematically. The fact that most of the CGI in THE SALVATION is noticeable—worse, glaringly obvious—undermines not only its modernist themes but also its connection to the genre as a whole.