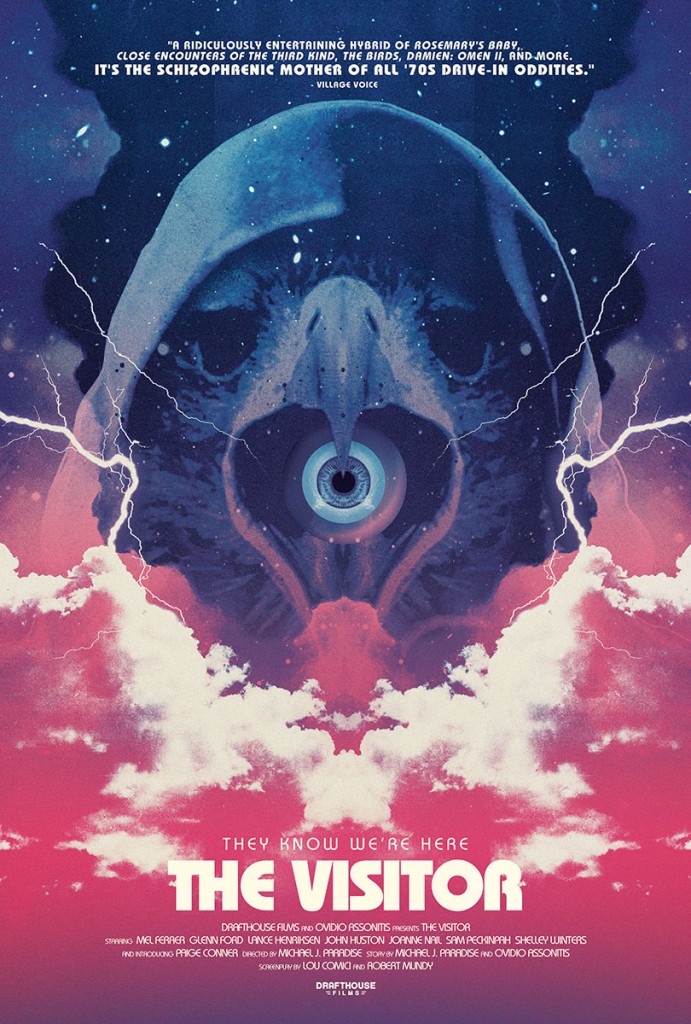 Most of you, when you think of the character of Gandalf from the LORD OF THE RINGS series, think of Sir Ian McKellen.  Well I do too. But first I think of John Huston.

In 1977, Rankin/Bass produced an animated musical version of J.R.R. Tolkien’s “The Hobbit,” which featured a host of prominent vocal talents of the era but also a couple great directors, such as Otto Preminger (as an elf king) and John Huston, director of THE TREASURE OF THE SIERRA MADRE and star of CHINATOWN, as Gandalf the gray wizard.  The cartoon HOBBIT was completely fucked-up and weird so, needless to say, I’ve seen it about a hundred times.

If only I’d had any inkling before now what kind of fuckery John Huston would be involved with only a year or so later. 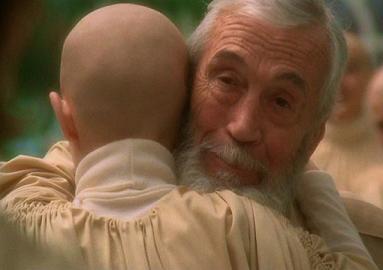 Where does one even begin with THE VISITOR?  For starters, one probably ought not classify it amongst the horror genre, although all of the poster art past and present seems to promise frights within, and there are a couple attacks by winged creatures which, were they to occur in Hitchcock, would play disturbingly.  But the bird attacks in THE VISITOR don’t play that way.  THE VISITOR isn’t strictly a horror film.  Nor is it strictly science-fiction epic, or strictly religious allegory, or strictly phantasmagorical vision quest.  Wikipedia calls it a “psychological thriller.” IMDb uses keywords such as “occult,” “italian horror,” “satanism,” “supernatural,” and “terror.” The pull-quote on the re-release poster likens it to a stew of ROSEMARY’S BABY, CLOSE ENCOUNTERS, and THE OMEN. Vice calls it “the entirety of 1970s horror shoved into one film.”  Nobody’s wrong here.  It’s all and it’s none.   It doesn’t cleave neatly to any boundary of genre, unless of course you have a special shelf for films labelled “WHAT THE FUCK?” 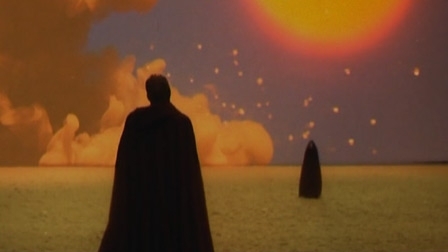 Drafthouse Films has had THE VISITOR digitally remastered and has been projecting it nationwide this weekend at venues such as the Alamo Drafthouse in Yonkers and at Cinefamily in Los Angeles.  It’s a great audience picture, because you can look around the audience and watch as giant question marks appear over everyone’s heads.  There are no easy explanations for this thing.  The project began from an idea by producer Ovidio Assonitis, who coincidentally I’ve just been reading about in the new Roger Corman book,  Crab Monsters, Teenage Cavemen, and Candy Stripe Nurses — Assonitis is the guy who fired James Cameron off PIRANHA 2.  Before THE VISITOR, he was responsible for films like BEYOND THE DOOR (a rip-off of THE EXORCIST), TENTACLES (a JAWS rip-off about a giant octopus), and THE DAY SANTA CLAUS CRIED (which I’m having a hell of a time learning more about, and maybe that’s for the best).  Assonitis picked a strange time to make a seemingly-sincere dimension-spanning art film. 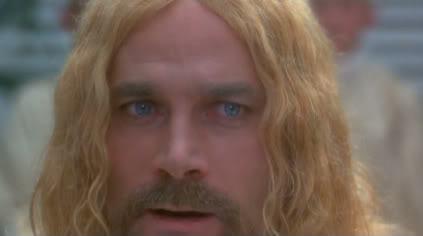 Where does one begin with THE VISITOR?  Certainly not with a plot recap.  That would not only take all day, but would prove to be a fruitless endeavor.  It’s entirely possible that THE VISITOR makes sense to the people who made it — Ovidio Assonitis, director Giulio Paradisi (billed as Michael J. Paradise), screenwriters Luciano Comici and Robert Mundi, any number of the actors — but the way it unspools, it’s pure delirious chaos.  The film opens with a cloaked John Huston, rocking his best Obi-Wan Kenobi, facing off on an unending plain against a smaller, more sinister, fully-cloaked figure.  No, not a Jawa, smart-ass.  The small shadowy figure seems to bring a snowstorm to the desert, revealing a kind of frozen doll face.  It’s a bit too confusing to be spooky, and by then the film has taken us to meet Jesus — no I’m not kidding — the blond blue-eyed Jesus Christ himself is telling a story to a bunch of bald future kids.  The Christ is played by an unbilled Franco Nero, star of DJANGO and STREET LAW and ENTER THE NINJA and apparently anything else you asked him to do in 1979. 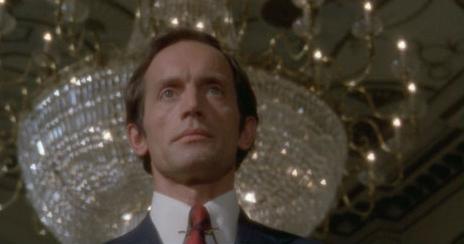 Franco Nero is not the only uncredited celebrity to appear in THE VISITOR.  Kareem Abdul-Jabbar makes a brief appearance as himself. The next important batch of characters are introduced as spectators in the owner’s box at a basketball game — a relatively unknown Lance Henriksen plays a character named Raymond Armstead, a very wealthy man (he tells a reporter his money comes from “God”), the team owner.  With him is Joanne Nail as the beautiful and troubled Barbara Collins, and her daughter from an earlier marriage, eight-year-old Katy (Paige Conner).  If you get lost at any time during THE VISITOR you can do what I did and just admire the appearance of Joanne Nail — she was never famous but she played the title role in MAGGIE’S STILLETTO SISTERS for Jack Hill and took over Raquel Welch’s role for a gone-nowhere TV version of the classic movie MOTHER, JUGS & SPEED. 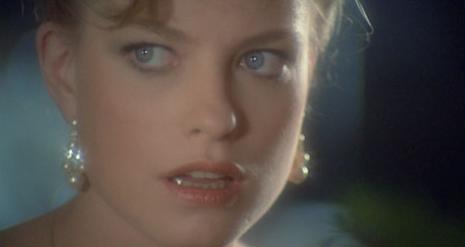 Now stay with me here:  Barbara, it seems, has a magical womb from whence gifted children can spring.  Raymond knows this but Barbara doesn’t.  Katy knows this also, and continues to badger her mother to make love to Raymond so she can have a brother.  This request is repeated more than once in case you miss it the first time.  Barbara, however, is reticent.  Something’s not right with Katy.  Katy scares her.  It’s not just that Katy has an inexplicable Southern accent — maybe that comes from her dad? (don’t worry, we’re getting to him) — Katy is clearly one of those devil kids that were all over the place in 1970s movies.  The men never see it until it’s too late, but Mom knows. 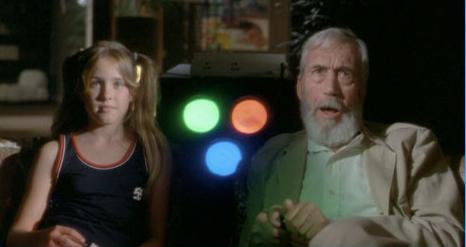 Katy is bound up with the essence of a demonic entity named Sateen, and it’s not a fabric.  John Huston’s character comes to Earth to help Barbara.  He gives his name as “Jerzy” and claims he’s been sent as a babysitter.  Both Raymond and Barbara think Jerzy is a little old for a babysitter but I was more concerned by the fact his name was “Jersey.”  More than once, this movie makes the mistake of giving a character a name that sounds different than it would read.  And wasn’t “Sateen” Nicole Kidman’s character in MOULIN ROUGE?   Anyway, while Jerzy is taking his sweet time mobilizing forces against evil, poor Barbara is going through hell.  Katy tortures her, at one point causing an accident that leads to Barbara’s paralysis.  Jerzy sends in a kindly housekeeper, played by Shelley Winters at the height of her POSEIDON ADVENTURE kindliness, but I’m pretty sure even this character comments on how little she does to protect Barbara from Katy.  The good guys in this movie are so ineffective that it took me a long while to figure out that they were supposed to be the good guys.  I forgot they had Jesus on their side. 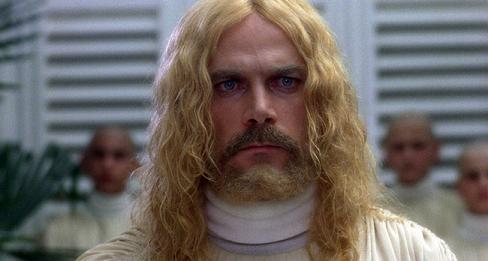 A well-meaning detective, played by the great Glenn Ford (GILDA, 3:10 TO YUMA, THE BIG HEAT, SUPERMAN) gets the Martin Balsam in PSYCHO treatment.  He looks into the case of all the bad things happening around this little girl, and it doesn’t end well for him.  See, Katy has a pet hawk and one thing that hawk really hates is eyeballs.  That can be a problem when a guy’s driving.  Let’s just leave that there. 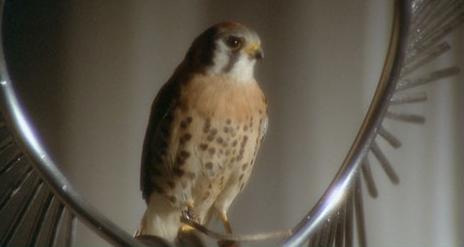 There’s a lot of confusion padding out THE VISITOR, but the confrontations between Katy and Jerzy are truly scenes for the ages.  Start with the one at the ice skating rink, where she knocks over scores of skaters as he descends an interminable staircase.  Or take the moment where they face off in a tense game of Pong.  Again, the good guys take a remarkably long time to do much of anything to help Barbara out.  Raymond, as hinted at by the fact he’s played by Lance Henriksen, isn’t on the side of the angels — he represents a shadowy conspiracy who wants the powers of Barbara’s magical uterus for their own ends.  And he succeeds!  He gets Barbara pregnant, at which point she doesn’t know where to turn — as evidenced by the scene where she spins her wheelchair around in circles for what feels like five full minutes of screentime.  Eventually, she decides to go seek out the services of the one man left she can trust, her first husband, Katy’s father… 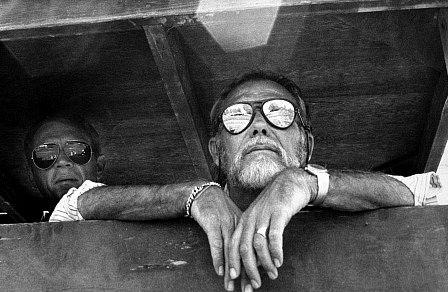 BLOODY SAM PECKINPAH!  I shit you the fuck not.  No wonder Katy is such a handful.  “Dr. Sam Collins” is played by Sam Peckinpah, then 64 and looking at least twenty years older and drunker.  It’s not the thirty-year age difference that makes a union between angelic, flawless Joanne Nail and Sam Peckinpah difficult to imagine.  It’s the fact that he directed THE WILD BUNCH, THE GETAWAY, STRAW DOGS, THE BALLAD OF CABLE HOGUE, and BRING ME THE HEAD OF ALFREDO GARCIA.  In a movie chock full of insane behavior, a woman turning to Sam Peckinpah for sympathy with her womanly problems manages to stand out.  In THE VISITOR, he’s portrayed as an altruistic (if self-involved) doctor in a low-income clinic — I don’t know, is that supposed to be ironic?  And Barbara asks Sam to perform an abortion.  It’s surely the most romantically-filmed abortion conversation in film history, as both of them are captured in soft focus in front of a window bathing them in evening light.  With the music and everything.  Every preceding scene was insane enough before this moment, but this one makes the film literally certifiable.  I mean it.  When I get my hands on a copy of THE VISITOR, I’m going to fit it with a little strait-jacket and toss it into an asylum. 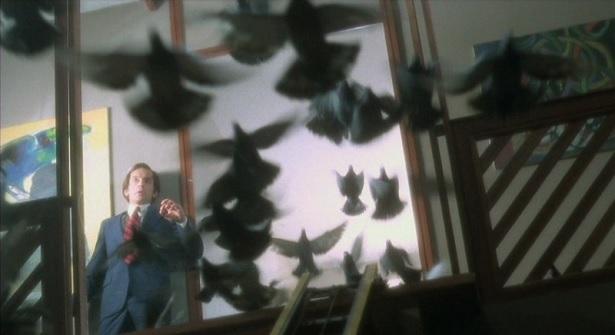 I may be too rattled to continue recapping THE VISITOR, so let it be said that eventually the grand battle between the forces of good and evil does in fact transpire.  Interestingly, Stephen King published THE STAND the year before this film was released — in many ways, and I haven’t heard it said yet, but THE VISITOR is like a deranged version of THE STAND.  That’s the only holistic comparison.  Everything else is piecemeal.  “This scene is like this movie,” “that scene is like that other movie,” and so on.  Look at the penultimate confrontation between Jerzy and Katy in a darkened house of mirrors, for example — is it a rip-off of THE LADY FROM SHANGHAI, or is it a rip-off of ENTER THE DRAGON, or both?  It probably isn’t neither.  There’s not a lot in this movie that isn’t derived from other movies. 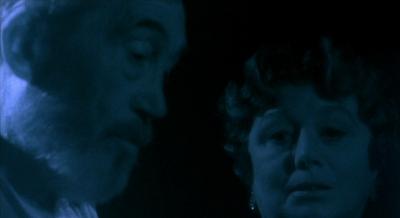 That said, there is a genuinely unified feel to this movie that is made up of so many other movies.  Its insanity is of a piece.  It isn’t like there’s a single standout sequence that makes the rest feel less bizarre by comparison.  It has the feel of a daffy masterwork though it surely isn’t one.  At two hours, THE VISITOR becomes exhausting because it is so relentlessly consistent in its weirdness.  How many times can you exclaim “What the fuck?!?” before your voice gets hoarse?  But you can’t tear your eyes away from the screen, not even if there were a flock of birds pecking at them.  THE VISITOR synthesizes the twin mythologies of popular religion and movies in a way that is captivating and mysterious.  As a kid I don’t know how many times I saw the animated HOBBIT and THE POSEIDON ADVENTURE on TV — now here’s a movie that puts the voice of Gandalf and that nice old Jewish lady on an intergalactic tarmac against a starry sky, discussing cosmic realities of good and evil. It doesn’t mean anything at all, but it also means everything, you know?

New trailer for THE VISITOR cut by HOBO WITH A SHOTGUN director Jason Eisener! 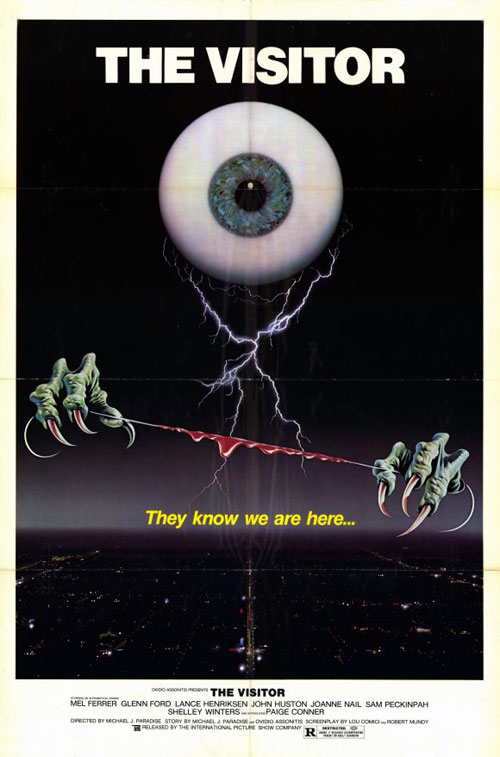