Home  ⁄  The Wire  ⁄  THEY LIVE COMES TO BLU-RAY/DVD ON NOVEMBER 6TH FROM SHOUT FACTORY. VOTE, KICK-ASS, CHEW BUBBLEGUM, AND BUY THIS GOOD SHIT!

THEY LIVE is another classic in the John Carpenter cannon. The film is filled with social and political suggestions, it is an incredibly smart film that features one of the best (and longest) fist-fights in film history, all while staying true to it’s B-movie roots. As we reported earlier this month, Scream Factory has been working on the Blu-ray and it’s just about ready for prime-time. Circle November 6th on your calendar, Bastards. That’ll be the day you need to vote, kick-ass, chew bubblegum, and buy this good shit! Damn, I dig that this is being released on election day.


A Film by John Carpenter 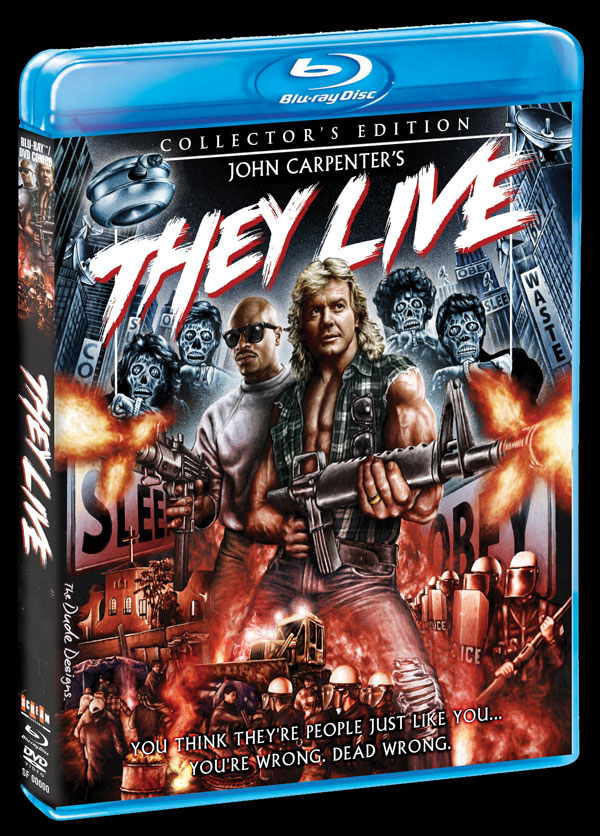 CLICK THE COVER ART TO PRE-ORDER FROM SHOUT FACTORY

The truth is more than meets the eye. You’ve been listening to their speeches and watching them on TV. They influence our decisions without us knowing it. Think again and the choice is yours! On November 6, 2012, SCREAM FACTORY™ presents John Carpenter’s politically-charged science fiction thriller THEY LIVE Collector’s Edition Blu-ray and DVD. Featuring anamorphic widescreen presentation of this cult classic movie, this special collector’s edition home entertainment release of THEY LIVE boasts a bounty of special bonus content, a collectible cover featuring newly rendered retro-style artwork, a reversible wrap with original theatrical key art and much more! THEY LIVE Collector’s Edition Blu-ray has a suggested retail price of $29.93 and $16.50 for the DVD. Fans and collector’s can pre-order now at ShoutFactory.com and Amazon.com.

* Production now underway for extensive and insightful bonus features that include all-new interviews, an audio commentary and archival material. Shout! Factory will announce in-depth bonus features and additional news in next couple months.

Avid John Carpenter fans, movie enthusiasts and collectors please take note: Order this collector’s edition Blu-ray or DVD directly from ShoutFactory.com and receive an exclusive 18”x24” poster featuring the newly commissioned artwork! Less than 500 have been made, so these are only available while supplies last. Read more @: Shout! Factory – Scream Factory

Horror master John Carpenter (Halloween, The Thing) directs this heart-pounding thriller in which aliens are systematically gaining control of the Earth by masquerading as humans and lulling the public into submission. Humanity’s last chance lies with a lone drifter who stumbles upon a harrowing discovery — a unique pair of sunglasses that reveals the terrifying and deadly truth.