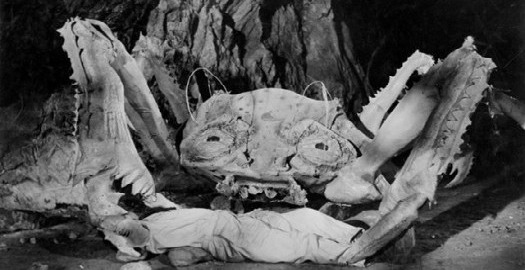 Roger Corman and the word subtle go together like Ike and Tina; they clash like a motherfucker. Case in point: ATTACK OF THE CRAB MONSTERS. More than any other film in Corman’s repertoire of B-Movie goodies he directed or produced during his early days in the 1950s, this eerie little flick exemplifies his style to a tee: hit your audience over the head with in your face shocks and suspense for sixty plus minutes while leaving nothing to the imagination. Grabbing the viewer’s attention with a decapitation scene seven minutes into the flick isn’t going to make one think they are watching a sex film about invading marauders in a guy’s pants. You know right off the bat this sucker is going to live up to its title and deliver a story about giant crabs that kill people.

Combining the obvious with an atmospheric sense of dread, Corman is still able to inject a sense of style into the proceedings. By saving the titular beast’s appearance for the last half of the film (which is one of your typical atomic mutated jobs, here portrayed by a large puppet operated by a film crew of two), Corman is able to build the audience’s sense of impending doom with spooky sound effects (I love the clicking/scraping sounds the crabs make when they are nearby off camera) and ominous dialogue about how there is no sign of life on the island where these monsters have mutated. The creature’s ability to take over a person’s mental powers after consuming them and sending out haunting ESP type vocalizations to their victims cleverly sets them apart from the other atomic beasties that were crashing across movie screens in the 50s.

Produced for an estimated $70,000, the film was Corman’s most successful film to date, proving the drive-in and later grindhouse cinemas were the perfect stomping grounds for Roger’s exploitive product. At just 62 minutes, the flick is the perfect filler for a late night viewing when you have just one more hour’s worth of stamina after that 12th beer. If only six beers in, throw on another great Corman quickie, NOT OF THIS EARTH (with which CRABS played on a double bill), to bump up the running time. 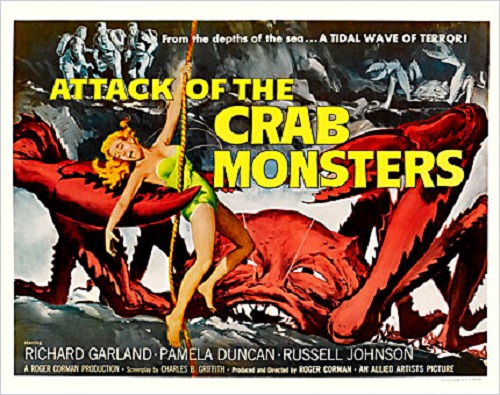