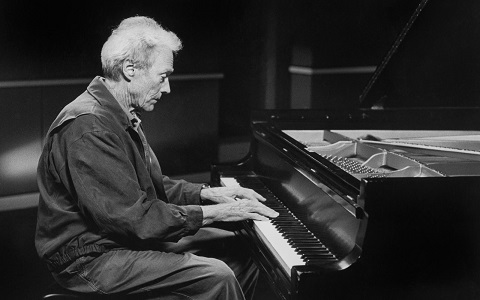 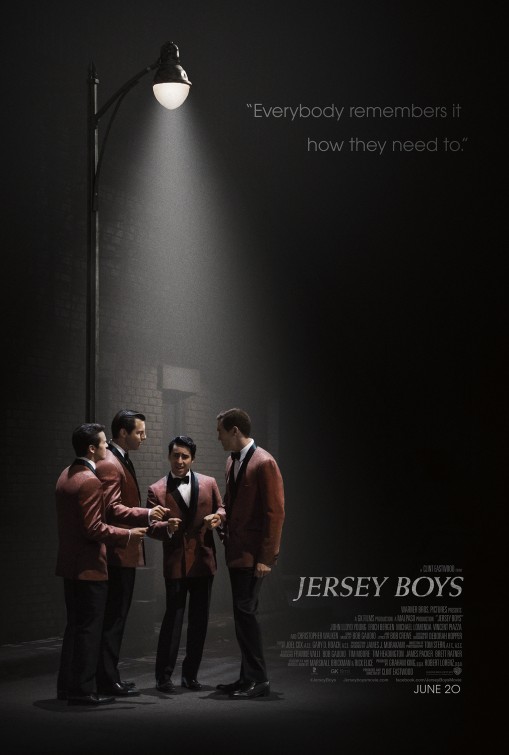 Just so we’re clear, there actually is a precedent for a Clint Eastwood musical. One of the great ironies of movies is that the two ultimate tough-guy actors in American film history, Clint and Lee Marvin, only ever acted against each other in a musical, 1969’s PAINT YOUR WAGON. It isn’t one of the great spectacles of the genre, but it does provide the unlikely event of a Lee Marvin vocal solo, and here’s Clint singing about nature:

Clint has always been a music enthusiast, and while he isn’t the most dynamic vocalist in the world, it’s a fun novelty when it does happen. For ANY WHICH WAY YOU CAN, the second comedy Clint made with Clyde the orangutan, Clint got to team up with Ray Charles for the single:

Most recently, he rasped the theme song to 2008’s GRAN TORINO, which I still think is charming and fun.

More importantly, music is a lesser-discussed leitmotif of Clint’s long career as a filmmaker. His first film as director, PLAY MISTY FOR ME, finds Clint as an actor playing a radio DJ in California. One of his greatest directorial triumphs, 1988’s BIRD, about Charlie Parker, was not only a well-made biopic but also Clint’s love letter to jazz music. One of his most under-valued films as both actor and director was 1982’s HONKYTONK MAN, in which he plays a country-western singer on the trail to Nashville. In 1984’s CITY HEAT, Clint leaves his buddy Burt Reynolds in the middle of a huge brawl just to play the piano. He also plays piano onscreen in 1993’s IN THE LINE OF FIRE. While it isn’t one of his better films, 1997’s MIDNIGHT IN THE GARDEN OF GOOD AND EVIL serves in part as an extended tribute to Savannah native and piano-playing jazzman Johnny Mercer. In his role as composer, Clint’s scores for MYSTIC RIVER, MILLION DOLLAR BABY, CHANGELING, HEREAFTER, and J. EDGAR are highlights, whatever else you think of those films. (Some are better than others, I admit.)

All of that is to say that it’s not entirely crazy that Clint’s newest film as director is a film adaptation of the stage musical JERSEY BOYS. But it is a little bit crazy. For one thing, he has one of the richest and broadest filmographies in the way of subject matter of anyone outside of maybe Hawks and Kubrick, but Broadway is decidedly not Eastwood turf. Dancing is not an Eastwood thing. I’m not sure if longtime Eastwood editor Joel Cox has even cut a full-on musical sequence. And Frankie Valli and the Four Seasons, while certainly fine and pleasant, don’t seem like Clint’s type of band. Maybe I’m wrong, but I gotta ask: Is Clint’s heart really in this one?

I ask this as one of the biggest Eastwood fans you personally know. Since I started writing about movies, I’ve written more about Clint’s movies than I have any other filmmaker’s. A while back, William Goldman claimed Clint’s career is the single best in all of movies, and I surely agree. Because you can debate the specific merits of each of his more than thirty films, but you would be hard pressed to argue that this is not one of the most intellectually curious directors there has ever been. If he was just the mindless, expressionless acti0n star his critics once dismissed him to be, he could easily have made a long line of DIRTY HARRY knock-offs. Instead, his Westerns are more thoughtful than almost anybody else’s, his action films are more surprisingly personal than almost anybody else’s, and his dramas show an uncommon interest in people and perspectives unlike his own.

Is that why he’s doing a musical about a bunch of doo-wop singers with over-the-top falsettos? I hope so. I think the last few Eastwood efforts — INVICTUS, HEREAFTER, and J. EDGAR — show the same kind of intellectual curiosity and ability to surprise. I guess what troubles me is the peripheral stuff, the uncharacteristic allowance of a reality show about his family, the TV commercial, the movie with Justin Timberlake, and the super-uncharacteristic chair incident. I guess I should trust in my artistic heroes, but if I’m being honest, I don’t really want to see a JERSEY BOYS movie, and that’s the first time I’ve been disinterested ahead of a Clint Eastwood movie.

I will be happy to be proved wrong! It’ll get a fair shot from me no matter what.