Before getting into the hyper-opinionated shit that will divide all you lovely readers into “he sure is talkin’ sense” and “what is this guy — fucking nuts?” camps, let me start by making one statement we can probably all agree with — Kevin Smith’s whole shtick got old a long time ago. Seriously, dude, we get it: you’re the big version of the little engine that could. You came from nothing, and with even less than that for a budget you hit it huge with CLERKS. It was funny. It was irreverent. It was tasteless. It was edgy. It was sophomoric. It was lewd, crude, and rude. And it’s still, by far, the best thing you’ve ever done.

You weren’t finished trying to catch lightning in a bottle again, though. A series of reasonably successful follow-ups ensued, until you supposedly closed the book for good on your “View Askewniverse” with the self-congratulatory JAY AND SILENT BOB STRIKE BACK. You were on to new horizons. You were growing up. You wanted to talk about things other than pot smoking, fucking, comic books, and how awesome STAR WARS is. The thing is — when your forays outside of all that didn’t work out, you came back with CLERKS II, which was a pretty pale shadow of its predecessor, all things considered. That flick did reasonable, though unspectacular, business at the box office, but it seems to have given you another way to try to “reinvent” your flagging career — namely, you’d bifurcate yourself.

There were enough fans of the “View Askewniverse” who’d fork over cash for anything and everything with your name attached to it, so you decided to keep them all happy by basically being all over the internet all the fucking time. From podcasts to blogs to YouTube to your own 24/7 online channel, you’ve just been everyplace. AMC got on board your gravy train by giving you and your pals a TV series, Comic Book Men, that continues to endure despite being whittled down from 60 minutes to a more palatable 30 and being shunted into the most remote regions of their post-prime-time schedule. You became a fixture at comic conventions and various other trade and memorabilia shows. You amassed an army of online supporters who would show up to defend you from even the most minute criticism, and when they weren’t doing the job vigorously enough, you’d defend yourself. In short, Kevin Smith became an industry. And hey, not to worry, whenever anybody had the temerity to point out that your ego seemed to grow in proportion to your ubiquitousness (a word I probably just made up), you’d have a well-timed, good-natured, barely-self-deprecating jab at your weight at the ready in order to show that, hey, you were still a regular guy who wasn’t too full of himself.

Still, in 2011, you seemed to come out left field with something truly different — a return to your self-produced, low-budget, independent roots in an entirely different genre. Leaving comedy, of both the milquetoast crowd-pleasing and vulgar “stoner crowd” variety behind, you unleashed RED STATE, a semi-topical horror flick that played things pretty straight and showed a more obvious Romero and Hooper influence than your previous work had ever hinted at. For the first time in a long time — probably since CLERKS, truth be told — you appeared to be willing to take a chance. to step outside the comfort zone you immediately established for yourself upon your ascent to the big time. To risk criticism and even ridicule by giving audiences something nobody was expecting, all in an effort to prove you weren’t some one-trick pony who could only, essentially, do variations of the same thing over and over again.

And you know what? I was so sick of to death of even seeing your name by that point that I just blew the thing off. 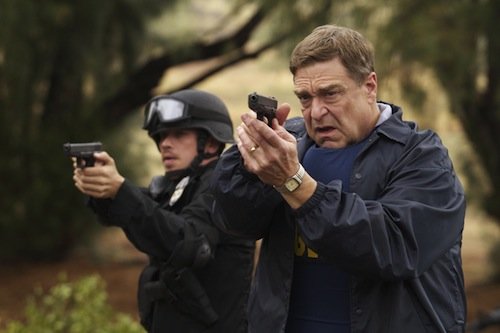 That’s probably tremendously unfair of me, I know, but “Kevin Smith fatigue” is a syndrome I think almost all of us are suffering from. Still, yesterday I noticed that RED STATE is available for streaming on Netflix (sorry, no DVD or Blu-ray specs included with this review) and thought, what the hell?  It’s got a first-rate cast (seriously, this flick is packed to the gills with talent, as evidenced by the fact that even established actors like Anna Gunn and Kevn Pollak are on hand in, essentially, bit parts), promised at least some level of socio-political commentary, and hey — I wasn’t doing anything else, anyway. So I settled in and gave it a go.

Right off the bat, it’s obvious this really is a different kind of Kevin Smith movie — laughs are few and far between (which is also true of many of his latter-period comedies, but that’s sort of beside the point), and there’s an energy and immediacy to the proceedings that I was thinking had become foreign territory to the director. It’s reasonably suspenseful, includes some terrific performances, and has a pleasing “hungry young filmmaker” vibe to it. Smith does, in fact, prove that he can branch out into other genres successfully with this one, and in that respect, you’d have to consider RED STATE to be something of a success.

But ya know what? The whole thing ended up falling kinda flat with me anyway.

It’s probably not for lack of trying, though — in fact, it’s for trying too hard: specifically, trying too hard not to piss anyone off.  Is this the same Kevin Smith that used to litter his scripts with jokes about donkey-fucking and necrophilia? Because despite its semi-politically-provocative title, RED STATE works overtime to make sure that nobody of any political or religious persuasion will take exception to it, and in the end, it’s that gutless, ball-less need to be inoffensive that really sells short all the first-rate work that folks have done here.

Not to worry, though — “help” is on the way on the form of the local ATF field office, led by special agent Joseph Keenan (John Goodman, who always turns in superb work), who have been monitoring the crazies at Five Points for some time for assembling a sizable weapons cache and are now ready to make their move. But are they going in to rescue our no-longer-quite-so-randy schoolboys, or to commit mass slaughter and cover the whole thing up?

Parallels to both the Westboro Baptist Church (Cooper’s outfit are infamous for picketing the funerals of gay folks) and the siege at the Branch Davidian compound in Waco are more than obvious here, and one would think Smith was sitting on top of more than one political powder keg with material of this nature, but wait — didn’t I just gripe about how safe he plays things? Indeed I did, so perhaps now would be a good time to elaborate on that. 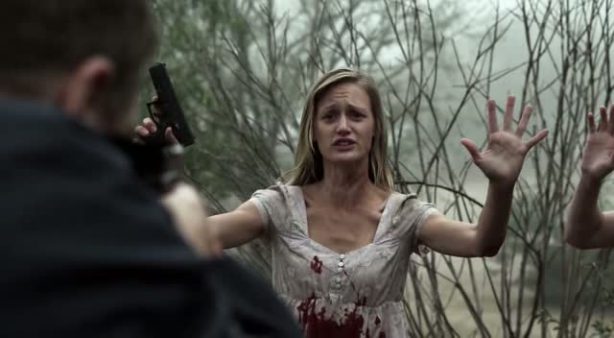 When we’re first introduced to the lunacy that is Five Points by way of an info-dump lecture delivered by the high school civics teacher, we’re told that they are an embarrassment to the state (in true “let’s-not-alienate anyone” style, the RED STATE this film is supposed to take place in is never actually mentioned by name — although it was filmed in the bluest of “blue states,” California), that every mainstream conservative group in the nation has disavowed them, and that even the fucking Nazi party considers them “too extreme.” So, hey, if you’re a Republican, or a Libertarian, or any other sort of conservative, don’t worry — Smith’s not taking aim at you, despite his movie’s title. You don’t even have to worry that he’s got a beef with you if you’re a goddamn Nazi.

Must be those pesky Westboro Baptists of “God Hates Fags” infamy who he’s criticizing, then, right? Not even. In a phone call with his superiors in Washington, special agent Keenan takes great pains to point out that these folks are even more extreme than Fred Phelps’ clan, and that the Westboro loonies, for all their faults, are peaceful, non-violent, and aren’t known to be building up an arsenal of any sort. So, hey, rest easy — if you stand outside of funerals with signs that say “Thank God For AIDS” and what have you, Smith doesn’t even have the guts to criticize you. The Five Pointers are a new, completely fictitious, in-no-way-based-on-any-actual-religious-or-political-group extremist outfit. It’s like he’s going out of his way to completely excuse and exonerate any and all actual people, organizations, or belief systems. All of which is plenty timid in and of itself, but when one of the kids who’s fighting for his life exclaims “but I’m not even gay!” (therefore, ya know, he doesn’t deserve to die) we go from a flick that’s way too timid to a film that’s flat-out offensively timid.

So, like, who are the actual, real bad guys here? The dastardly federal guv’mint? It looks that way for a minute when the ATF are getting ready to shoot first and ask questions later. Why, the bastards even manage to get the last of our teen trio killed (whoops, spoilers!), but Smith even lets them off the hook — it’s the closeted local sheriff who starts the gunfight, not the Feds, and in the end a truly weird plot twist prevents them from implementing a Waco-style massacre, so hey — no harm, no foul on their part, either. If you’re getting the idea that Smith’s working around the clock to de-politicize a script that ought to, by all rights, be highly combustible, give yourself a gold star (and — heh — five points).

And that’s the real tragedy of RED STATE in a nutshell: in so many ways it does everything Smith wanted to do by ably demonstrating that he’s a talented filmmaker who doesn’t need to pigeonhole himself. It has performances that range from “pretty damn good” to “amazingly strong” (even Oscar-worthy in the case of Parks). It has the potential to make liberals happy with a pointed critique of the extremist vipers that even the “mainline” conservative groups are still willing to get in bed with politically (some of the signs you see at Tea Party rallies are almost as offensive and outrageous as those you see at funerals the Westboro members are protesting at, for instance, and there are far fewer than “six degrees of separation” between the late reverend Phelps’ church and the Kansas state Republican power structure) and to make conservatives happy with a critique of heavy-handed federal government over-reach. It convincingly portrays the nightmarish reality of a siege situation and has a kind of urgency and authenticity to it that can’t be faked. And along the way it constantly undercuts itself by steadfastly refusing to actually criticize any actual persons or institutions and by letting everybody, from Fred Phelps to the ATF and all points in between, off easy. It has multiple targets in its sights, takes dead-accurate aim, and then refuses to fire a shot.

Not to worry, though — I’m sure Smith’s forthcoming CLERKS III will make even RED STATE look like brave, “edgy” film-making. Having taken a shaky step outside the nest and stumbled, ol’ Kev is going back to the safe confines of regurgitated familiarity. Expect the entirely expected.