As someone who’s been writing about movies for almost a decade now, I’m often asked what’s the worst film I’ve ever seen. The question isn’t necessarily asked to get my honest opinion: The pastime of watching bad movies is so widespread now, and so many even casual filmgoers have an awareness of the classics of the b-canon (THE ROOM, PLAN 9 FROM OUTER SPACE) that asking “what’s the worst movie you’ve ever seen?” in movie circles is like asking “what’s your favorite team?” in sports circles. People are waiting for me to say MANOS or GIGLI or THE BLADEMASTER to see if I’m a classics man or an Italian pulp man or more of a modernist. For a long time, my answer probably would’ve been something I’d seen on MST3K, or one of those late-80s-early-90s bikini-themed sex comedies that were forever in rotation on USA Up All Night. I’m speaking in the elliptical because I have seen TELEVOID; and now, I cannot unsee it, or know of a time before it was my own personal watershed of terrible movies. 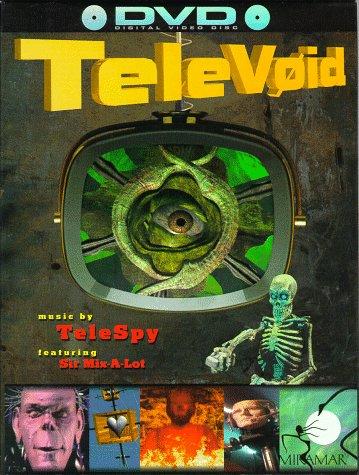 The story of how TELEVOID came into my possession is more interesting than the movie itself, though that’s not really saying much. My brother co-owns a concrete company in Tulsa, which means he has a truck, which means people are forever asking him to help them move stuff. As anyone with a truck knows, the size of the bed is directly proportional to exactly how much stuff people will ask you to move; and because my brother has an extended bed and a trailer, the “stuff” he’s asked to help move is often someone’s entire house. A few winters ago, a friend of his asked him if he’d like to make some extra cash helping one of his friends move that weekend. It’d only be $50, but, this friend had a house full of random junk, and he’d extended the invitation that anyone who’d help him move was welcome to pick through his unwanted crap and take it in lieu of a higher payment. Christmas was coming up, it was easy money, and, most importantly, my brother didn’t really have anything else to do, so he agreed.

The guy in question turned out to be a skulleted hoarder living in a dilapidated, two-story house in one of the older parts of Tulsa. He wasn’t so much moving as he was being evicted for turning the place into something out of one of the Fallout games. There was a hole in the living room ceiling large enough for a person to pass through, water was running on the floor from somewhere my brother never identified (and pouring through aforementioned hole), there were ripped up floorboards all over the place, and chunks of the wall had been torn away. Plus, the place was filled with junk, of both the literal and figurative variety. In addition to the piles of actual garbage, there were books, movies, musical instruments, taxidermied animals, and just about anything else you could think of—everywhere.

The move took most of Saturday, during which the guy constantly complained that my brother and his friend weren’t moving quickly enough while barely lifting a finger to help. When all was said and done, he reamed them out and tried to stiff them on the $50, but he was true to his word about letting them take whatever they wanted. I don’t remember what all exactly my brother took away in the haul, except for the DVD he brought me that Christmas: TELEVOID. It’d been the sole oddity among the hoarder’s otherwise run-of-the-mill movie collection, and my brother had (rightly) assumed from the weird cover and weirder plot synopsis that it’d be up my alley:

Skully is on the channel surf from hell as the TELEVOID tries to steal his mind. You think TV sucks, well it’s true, it’s sucking your mind into a safe place. SUBMIT to the TELEVOID. The brilliant animation in this science-fiction fantasy mocks the violence and negative fixation so prevalent in modern television. The gothic musical score by Scott Rockenfield (Queensryche) and Paul Speer carries you from one twisted reality to another. Don’t bother with the remote. Nothing can save you. 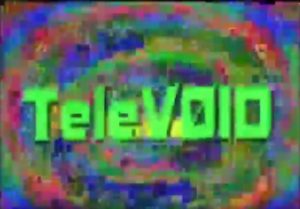 He hadn’t watched it because he thought it’d be a fun way to spend part of the Christmas holiday. So we hunkered down in front of the TV a few days after Christmas, armed with enough spiked eggnog to wipe out a small office party, and prepared ourselves for either the wonder, terror, or weirdness of TELEVOID. 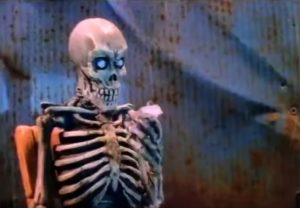 The opening is promising. Skully is a living skeleton, rendered in the kind of creepy, uncanny stop motion Tool used for their Sober music video. He lives in some sort of post-apocalyptic, subterranean realm, or possibly someplace on the outskirts of Hell; it’s not made quite clear. His house is a ramshackle, industrial looking place-out-of-time that effectively sets the tone for a creepy odyssey critiquing the state of late 90s television. Settling down in an armchair, Skully is contacted by a malevolent entity living inside his TV, setting up the events of the rest of the movie.

And that’s where things go off the rails.

What follows isn’t so much a movie as it is a screensaver in DVD form. The bulk of the film consists of hypnotic, repetitive imagery, rendered in the kind of low-grade, sub-SHARKNADO-quality CGI that was already outdated in 1995, all set to music that sounds like a cross between New Age and trance. We’re presented with flights through vaguely-rendered cityscapes that look like the “explore the city” feature on Sim Copter. There are walking tours of CGI pyramids, trips through CGI wormholes, and journeys through CGI haunted houses populated by CGI grim reapers and skeleton dogs. Occasionally, there will be glimpses of some sort of narrative, like a space cadet’s flight through a vector city or a sequence in which the camera dollies through what looks like the Cenobite realm from HELLRAISER, where a box transforms into a genie lamp that presages a comet striking a medieval village, after which a crying bald man presents a rose to three women who turn into mirrors (I said “glimpses”). It all culminates in a rap video for an original song (!) by Sir Mix-A-Lot called Mind Suck, ending on the image of a crucified mannequin with keyboards for arms and a television set for a head. It’s mindless, plotless, and pointless, claiming to be a commentary, critique, and analysis of contemporary television while being none of those things. 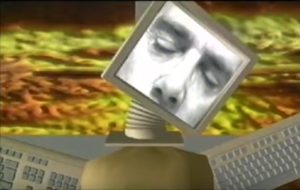 Aaaaaaand then it’s over.

The DVD box listed the running time of TELEVOID as one hour. The “movie” proper runs 49 minutes, followed by almost nine minutes (!) of credits; the complete runtime is 57 minutes. I like to imagine that those three unaccounted-for minutes are only accessible through some occultic means and that watching them drives you mad after revealing terrifying truths about the nature of the universe. But probably the distributor just padded it to make it sound less like a short.

Even in the internet age, there’s surprisingly little information about TELEVOID, and what information I’ve been able to compile on it I gleaned piecemeal from a variety of sources. As it turns out, the Skully segments began life as The Mad Doctors of Borneo, a series of short films by Webster Colcord (an animator and SFX artist who’d go on to work on such films as MINORITY REPORT and some of the X-MEN movies), which originally aired on MTV’s Cartoon Sushi in 1993. As the end credits reveal, the rest of TELEVOID was similarly assembled from a variety of sources from around the globe, stitching together work from various computer artists of the era.  The whole project was the brainchild of a man named Michael Boydstun, who spent the early 90s creating psychedelic CGI videos as part of something he called The Mind’s Eye series, which goes some way towards explaining TELEVOID’s overall aesthetic. The fact that this was never meant to be a single product—and that the highest-quality parts were essentially redubs of an extant work—goes a long way towards explaining TELEVOID’s mish-mash mindlessness—especially if, as I suspect, many of the segments were originally produced as demo reels of the artists’ CGI skills. If that’s the case, then TELEVOID is less of a film, per se, and more like the cinematic equivalent of stapling together 20 people’s writing samples and calling it a book. 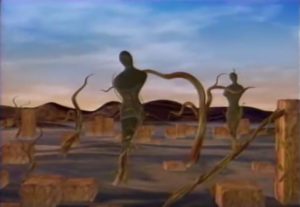 Like any bad movie, TELEVOID is not without its defenders, though the people I’ve found speaking out in favor of it may not exactly be the film’s intended audience: Apparently, it was something of a cult item among stoners in the early days of DVD, and most of the positive reviews I’ve found are cheerful reminisces of getting egregiously stoned to the trippy imagery. Then again, considering Boydstun’s early work, maybe that was exactly the point and I’m the one who’s missing the mark–maybe there wasn’t enough rum in our eggnog after all.

I doubt TELEVOID will ever reach the heights of bad movie infamy enjoyed by THE ROOM or the corpus of Ed Wood. There’s virtually no dialogue for audiences to engage in any kind of call-and-response games, no stand out set pieces ripe for mockery, no overwrought performances, and the entire movie itself is essentially, one big, long, bad special effects sequence. Still, for true connoisseurs of unbearable cinema, TELEVOID is essential viewing. It’s on YouTube, so, if you’re game—and have 49 minutes to kill—it may be worth a look. I’m not going to advocate watching it in any sort of inebriated state, but… well, it can’t hurt. And if you know anything about TELEVOID, or the people behind it, please leave a comment below. This is one bad film whose story needs to be told.

Do you hate your life? You can watch the entirety of TELEVOID for yourself here: https://www.youtube.com/watch?v=jJvi08XjxIQ