SCROOGE (1970, Ronald Neame) is a quintessential middle of the road movie musical. Some of it is wonderful, some of it is not. But as a whole, it’s awfully entertaining, and I’m grateful I gave it a chance when someone recommended it to me a few years ago. Leslie Bricusse (WILLY WONKA AND THE CHOCOLATE FACTORY) wrote the songs, the screenplay, and executive produced the film. That combination usually screams “vanity project,” and maybe it was, but who cares? It’s still a good (enough) movie. 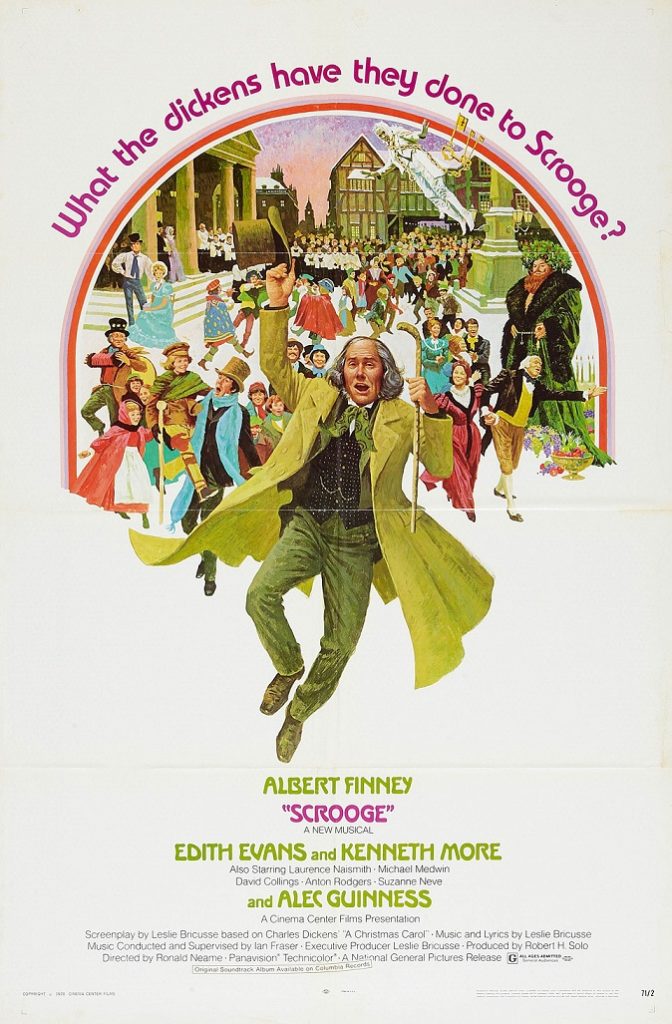 If you tell someone who hates musicals that there is a musical version of A CHRISTMAS CAROL, they will likely react with some variation of “I’ll bet Scrooge walks around London singing some awful song called ‘I Hate Christmas.” If you find yourself in that situation, you look that terrible musical-hating person in the eye and say, “Shows what you know. It’s called ‘I Hate People’ and it isn’t that bad!”

Truth be told, “I Hate People” isn’t that good, either. But the next song is a delight. At the beginning of the movie, Scrooge had used a coal shovel to threaten a group of kids caroling at his door. For this, he’d earned the nickname Father Christmas. So when the same group of boys sees Scrooge that evening, they follow him around, singing “Father Christmas.” And they’re relentless. If Scrooge goes into a store, they wait until he comes back out. If he heads down an alley, they race around to cut him off at the other end. Kids singing obnoxiously on purpose is one of the worst things you can put in a musical, but here it’s damn funny.

And that’s how the movie goes. A couple of high points, a couple of low points, back and forth, with a smashingly good finale. Probably the most well-known song from SCROOGE is “Thank You Very Much.” It’s bright and cheerful and unexpectedly savage. The song comes during the Christmas Yet to Come sequence. Scrooge joins a crowd, singing and dancing along with them, not realizing that they’re thanking him for having died, thus freeing them of their debts. It’s dark, but it’s got a tune and you can dance to it.

There are a couple of lovely ballads in the Christmas Past section. Scrooge looks on as Isabel (Suzanne Neve, the character renamed from Belle in the novella, and here made Fezziwig’s daughter) sings a lilting British ballad to his younger self (Finney, without the old man make-up) during their courting days. After he witnesses their break-up, he sings the melancholy “You… You.” Albert Finney is not a singer so much as an actor who sings, but it’s a powerful song and he pulls it off beautifully.

Finney does well as Scrooge. He doesn’t really mine the depths of the character, but the screenplay doesn’t really allow him to do so. As Jacob Marley, Alec Guinness is surprisingly fey. I’m not sure if he was specifically playing Marley as gay or if that’s my modern interpretation. Edith Evans makes for a droll Ghost of Christmas Past, and David Collings is a boyishly charming Bob Cratchit. Scrooge doesn’t get to him the way other Scrooges get to other Cratchits. You can see how he has the energy to tolerate the old man all day, and then go home to be the loving father his family needs. 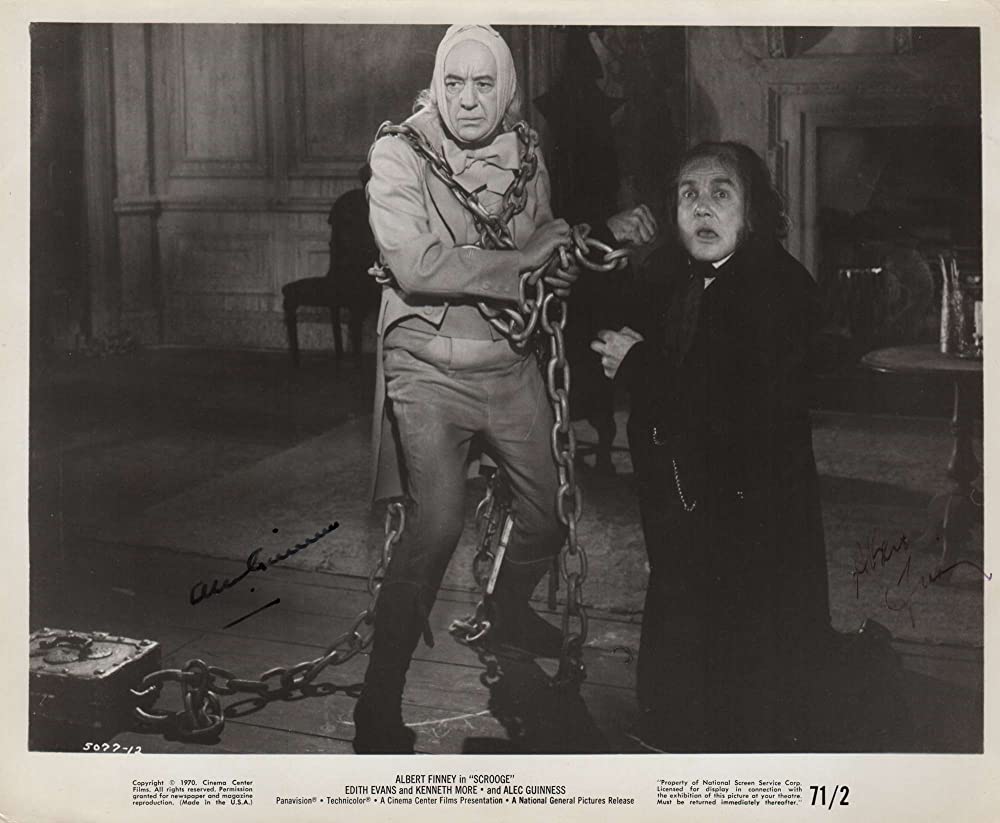 — The “smashingly good finale” is a medley “I Like Life,” “Father Christmas,” “Thank You Very Much” (this time because Scrooge himself canceled all outstanding debts), and the title song.” sung by the entire chorus. The caroling boys are back, there’s a quartet of dancing pipers, they all happen upon a bell choir and it’s so full of good cheer that I remember the entire movie as better than it is.

— Bricusse saw fit to add a scene of Scrooge in Hell (between the Christmas Yet to Come and Redemption scenes). Marley is there to greet him (no one else wanted to). And Scrooge learns he’s to be the Bob Cratchit to Lucifer himself, in the only freezing room in Hell.

— Paddy Stone’s choreography is terrific. Some of the steps are simple, but when 100 people are doing them at once, the simplest movement can be very effective.

— Ronald Searle is the artist who created the beautifully illustrated opening credits.

— Based on the appearance of Scrooge’s home, you’d think he was destitute. Cobwebs everywhere, worn and tattered curtains. The acquisition of the money is the point, not its use. Like how we keep buying Blu-Rays, even though we already have a stack of unwatched Blu-Rays.

And Speaking of STAR WARS Actors in the Jacob Marley Role… 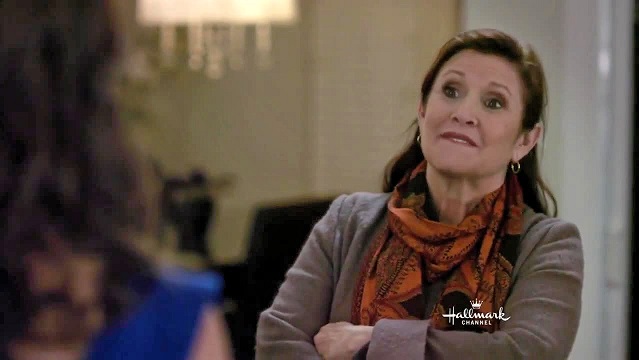 Carrie Fisher played Eve in the Hallmark Channel movie, IT’S CHRISTMAS, CAROL! (2012, Michael M. Scott). Our Scrooge is Carol Huffler (Emmanuelle Vaugier), CEO of a publishing house that was founded by Eve. Bob Cratchit is literally everyone who works for Carol, but especially Tanya (Chelah Horsdal). Tanya is fired on Christmas Eve for having the audacity to recommend a contemporary novel, despite working in the classics department. You know the rest of the story (there’s no Tiny Tim). Carrie Fisher plays the Jacob Marley character as well as all three ghosts, and she’s the only real reason to watch this movie. But the best part comes on Christmas morning, when Carol offers Tanya her job back. Tanya tells Carol that she woke up happy for the first time in years because she no longer worked for Carol. In a movie where the head of a publishing company can’t remember the name of A Christmas Carol, it’s the only moment that rings true. (It’s a Hallmark movie, so of course everything works out for everyone.)