THE STINGIEST MAN IN TOWN was broadcast live on December 23, 1956 on the NBC network, as an episode of the anthology series, The Alcoa Hour. Basil Rathbone (who played Marley’s Ghost in an earlier Christmas Carol television musical) starred as Ebenezer Scrooge. Also featured were Robert Weede (Jacob Marley), Vic Damone (Young Scrooge), Patrice Munsel (Belle), Johnny Desmond (Fred), and The Four Lads, as narrator-carolers. The broadcast was considered lost for years, but a 16mm kinescope was discovered and transferred to DVD in the early teens. 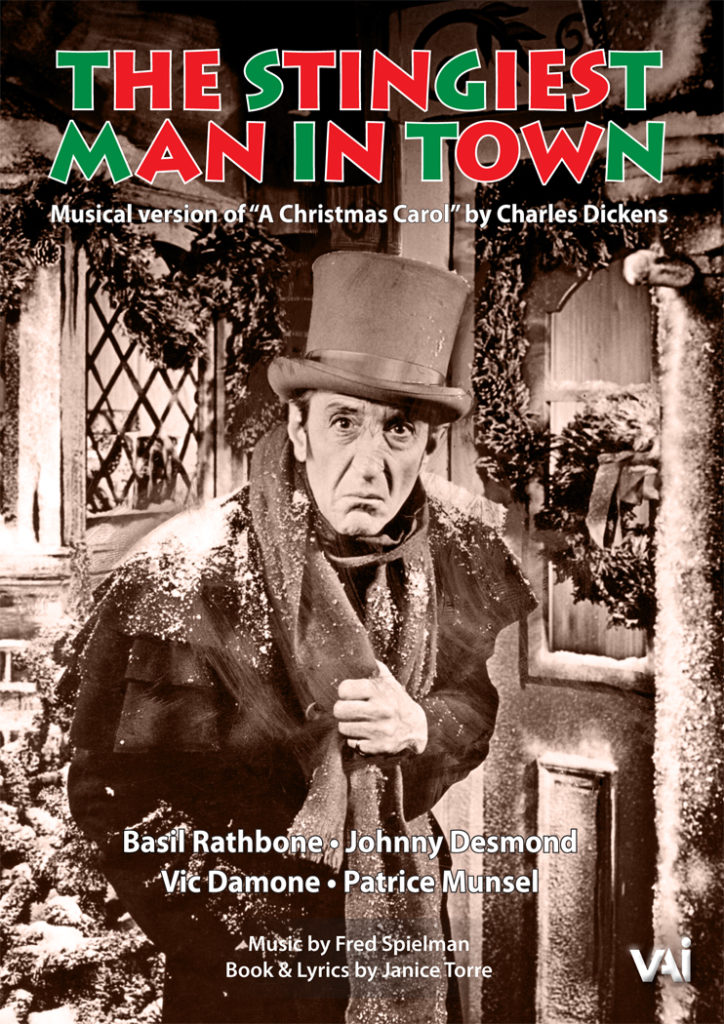 The use of music and the musical format is exceptional in this Christmas Carol. The Christmas Past section has an eleven-minute extended scene of song and dance that covers the decline of Young Scrooge and Belle’s relationship. It begins with the “Country Dance” at Fezziwig’s. A short scene follows where Belle tells Ebenezer that she’s ready to marry him, no matter how much money he has, to which he replies “When poverty comes through the door, love flies out the window,” and that he wants a life with her that will be worth waiting for. “Golden Dreams,” a lovely waltz for Ebenezer and Belle, follows. It’s their expression of love, and Damone and Munsel’s vocals are outstanding. 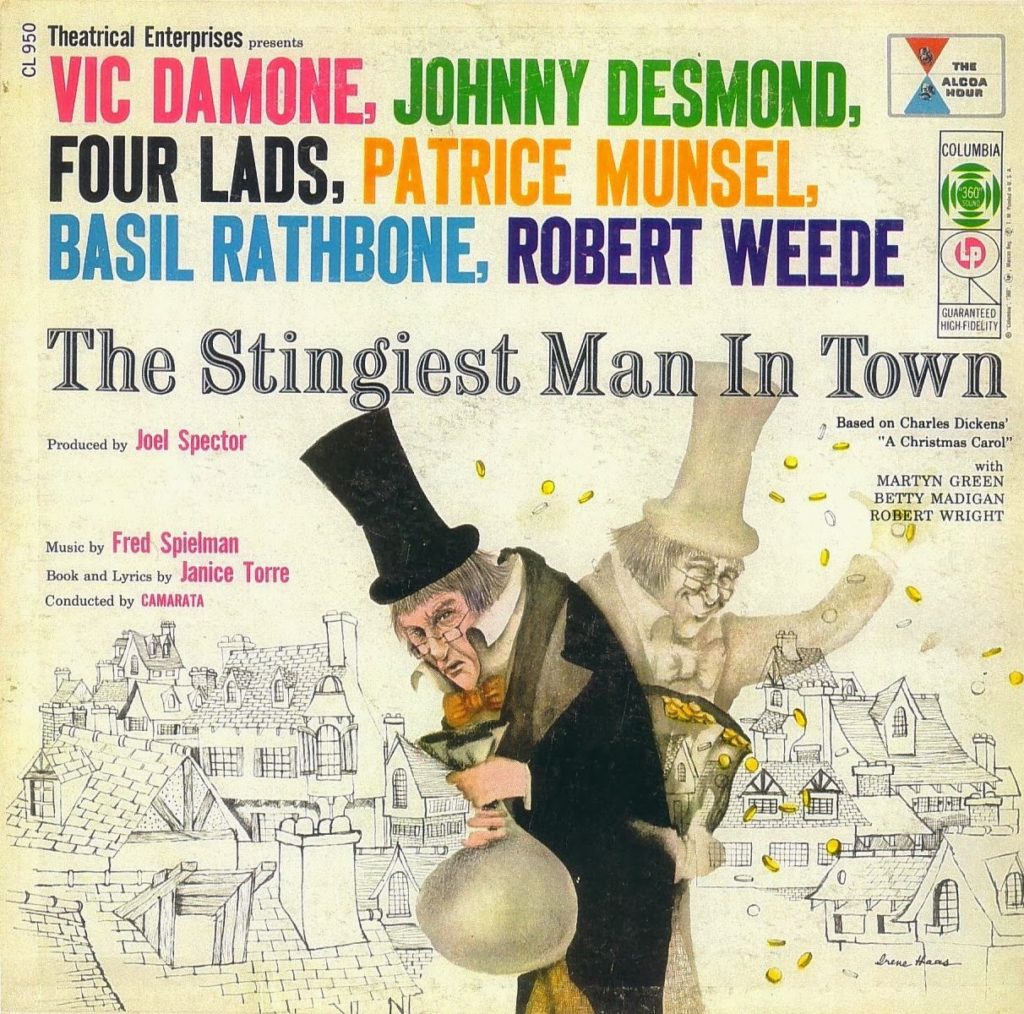 There’s a short ballet next that depicts Ebenezer’s acquisition of wealth, and as it goes on, a literal wall of gold is built that separates Ebenezer from the world, and from Belle. The sequence ends with another duet, sung from opposite sides of the wall, as Belle breaks their engagement. (“It Might Have Been”). This is the memory that breaks Old Scrooge, who begs the Ghost of Christmas Past (Ian Martin) to leave him be.

This kind of combination of song, dance, and dialogue is the apex of musical comedy writing. Each form of storytelling is enhanced by weaving it with the other two. To be honest, I wasn’t expecting to find such sophisticated writing in THE STINGIEST MAN IN TOWN, but it was created during the golden age of live television, so I probably shouldn’t have been. Songwriters Fred Spielman (music) and Janice Torre (lyrics) come from MGM, where they contributed, separately and together, to IN THE GOOD OLD SUMMERTIME, NANCY GOES TO RIO, and BIG CITY, among others. Maybe if they’d been given the opportunity to write a complete song score of their own, they’d be better known today.

The songs in THE STINGIEST MAN IN TOWN also highlight an element of this program that is usually missing from any version of A Christmas Carol: Christmas, so to speak. The story takes place on Christmas, and everyone is celebrating Christmas, but there’s rarely a mention of the things we associate with Christmas today: the birth of Christ, and Santa Claus. Granted, the way we celebrate Christmas today is far different than it was in 1843, but it’s surprising that even modern versions haven’t grated on one of the two do Dickens’s story.

At the Cratchit’s during the Ghost of Christmas Present scene, Martha (Betty Madigan) sings “Yes, There Is a Santa Claus” to Tiny Tim (Dennis Kohler). It deserves to be a Christmas standard. When the Ghost (Robert Wright) takes Scrooge to his nephew Fred’s Christmas party, Fred sings “The Birthday Party of the King,” to his guests while the camera focuses in on a nativity scene. Dickens scholars have been debating the role of Christianity in A Christmas Carol for years. But it seems as though Dickens intended A Christmas Carol to be spiritual, but not religious. Like your freshman college roommate.

And speaking of THE STINGIEST MAN IN TOWN… 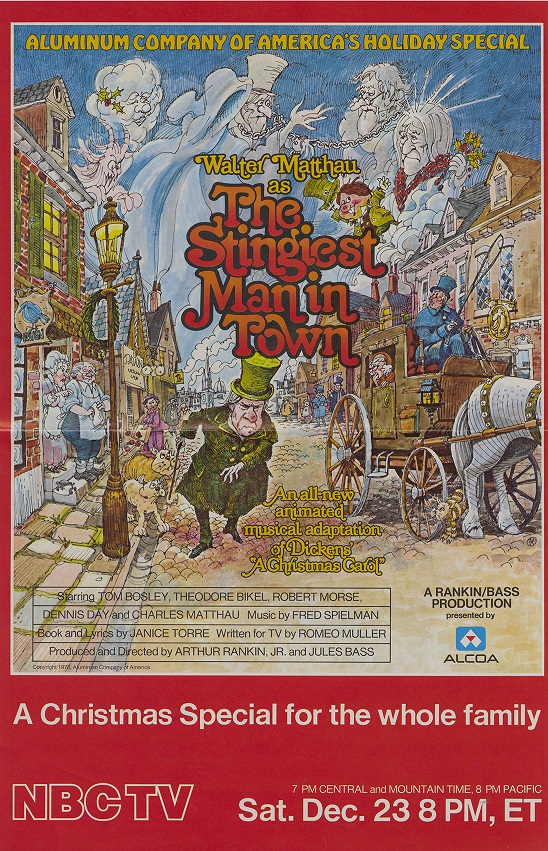 THE STINGIEST MAN IN TOWN (1978) was remade as an animated special in 1978 by Arthur Rankin, Jr. and Jules Bass. This time out Walter Matthau plays Scrooge, and it’s a darn shame he didn’t get his own, live-action adaptation (ideally with Jack Lemmon as Marley). Many of the songs are held over from the original, but the script sticks closer to Dickens. Tom Bosley narrates as an insect, B.A.H. Humbug. (Insect. Hum-bug. Clever.). Robert Morse, Theodore Bikel, and Dennis Day round out the cast. It’s very well done, and worth seeking out, especially if you’re looking for something new to add to your kids’ rotation of Christmas specials.