In 1974, the Disneyland Records released, “An Adaptation of Dickens’ Christmas Carol Presented by the Popular Repertory Company, The Walt Disney Players.” You can hear the whole thing at mousevinyl.com (it’s pretty fun). 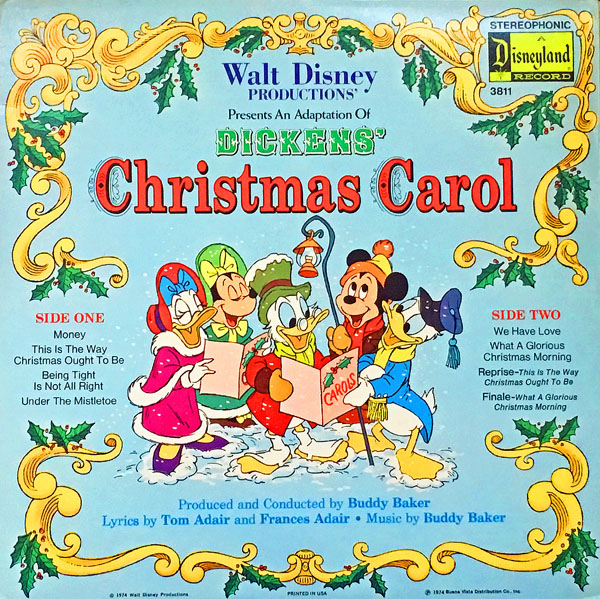 Every version of A Christmas Carol carries with it a certain amount of nostalgia.The story has become so ingrained in popular culture (and sitcom writers’ rooms) that it’s rare to find someone who isn’t at least aware of the its basic narrative. MICKEY’S CHRISTMAS CAROL (1983, Burny Mattinson) adds another layer of nostalgia with a cast of beloved Disney characters, but never overdoes it, and the result is a real treat. 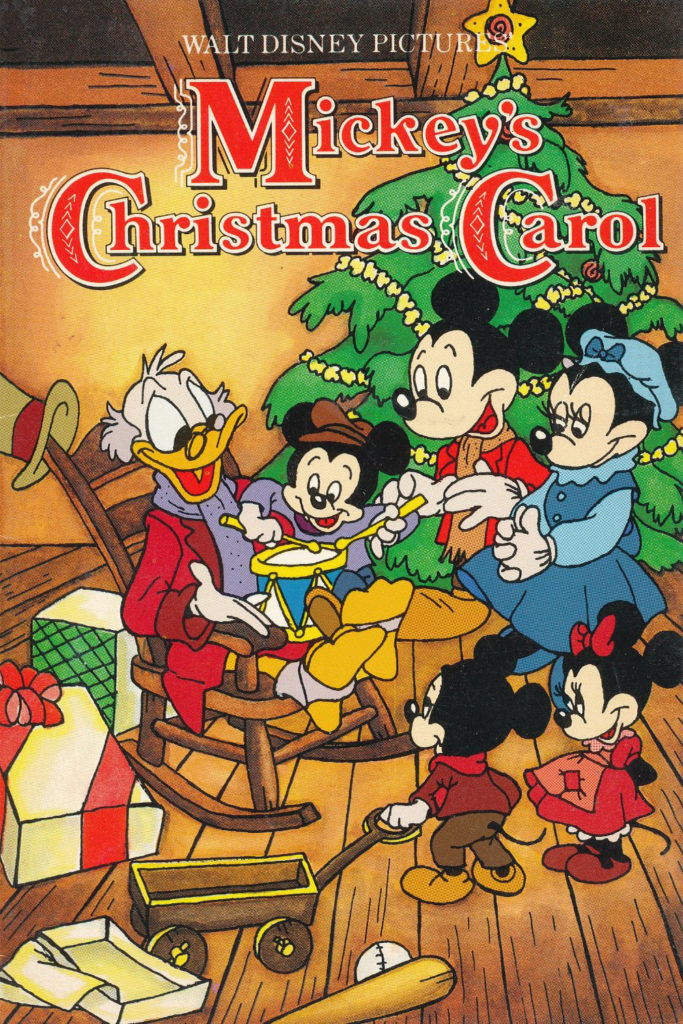 In fact, most of the fun to be had in MICKEY’S CHRISTMAS CAROL comes from the presence of so many familiar faces. Most of the cast of the 1974 record was carried over to the film. Scrooge McDuck as Ebenezer Scrooge, Donald Duck as nephew Fred, Mickey Mouse and family as the Cratchits. Goofy is a riot as Jacob Marley, and we even get a Goofy Holler when he falls down Scrooge’s stairs. Jiminy Cricket shows up as the Ghost of Christmas’ Past, Willie the Giant is the Ghost of Christmas Present, and Black Pete plays the mostly silent (and then he’s terrifying) Ghost of Christmas Yet to Come.. 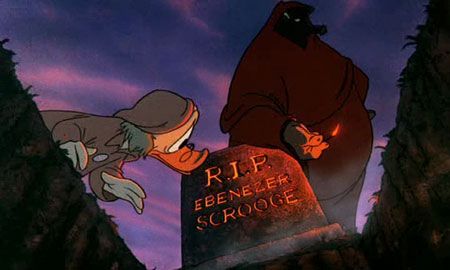 But those are just the major characters. The extras include characters from across the Disney spectrum: the THREE LITTLE PIGS (1933) are caroling while the Big Bad Wolf rings a bell for charitable donations, and Otto, the blacksmith in ROBIN HOOD (1973), asks Scrooge for change. That’s a span of forty years of animation in a single shot. The animators seemed to be having a lot of fun with these cameos. Lady Cluck dances with Secretary Bird at Fezziwig’s (J. Thaddeus Toad) Christmas party. Skippy and Toby pass by the collectors for the poor (Ratty and Moley) while playing in the snow. It’s rather delightful seeing all of these characters together to tell a story with such universal appeal. 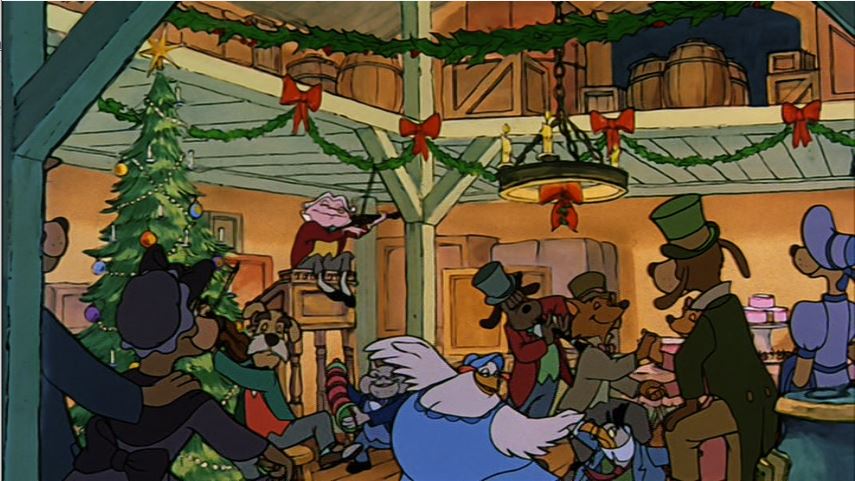 — It’s also the first time Alan Young played Scrooge McDuck on film (he appeared on the 1974 album). He would continue with the role until his death in 2016. 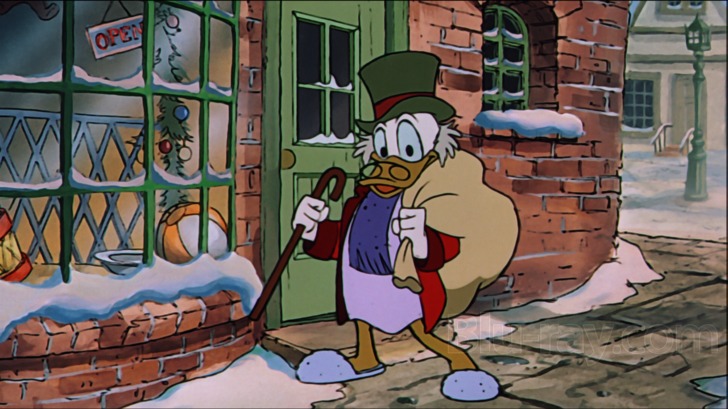 — There’s really nothing notable about the adaptation itself. The original story is trimmed for a 26-minute running time, and Scrooge is softened for a Disney audience (Scrooge no longer mentions being buried with a stake of holly in anyone’s heart, nor does he sing the praises of debtors’ prisons and workhouses. Everyone’s a sellout.)

— Donald Duck as Fred seems to have no compunction about serving goose on Christmas Day. That’s how you disappear into character.

— The Ghost of Christmas Present, played by a giant, pulls a streetlamp out of the sidewalk, and uses it as a flashlight, even clicking it on and off.

And speaking of Disney’s A Christmas Carol… 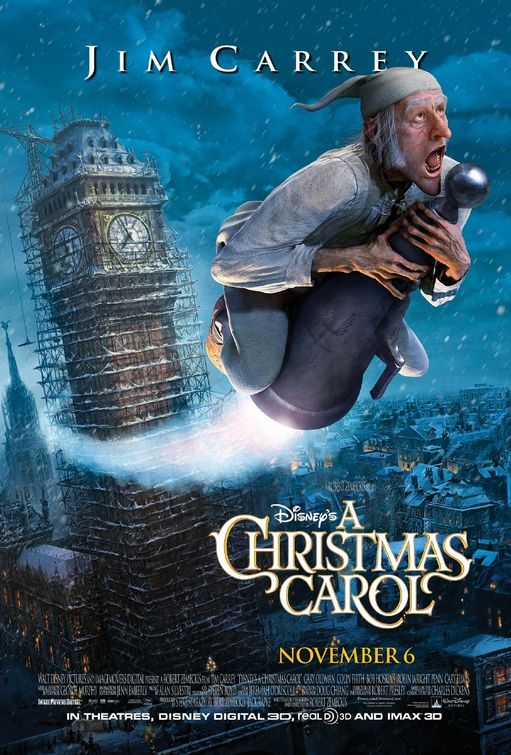 Disney’s A CHRISTMAS CAROL (2009) is a computer-animated film written and directed by Robert Zemeckis. Through the magic of motion capture filming, this Christmas Carol has a relatively small cast (including Jim Carey, Gary Oldman, Robin Wright, Bob Hoskins, and Cary Elwes), with many of the actors playing multiple roles. The film is a technical marvel, but while while the visuals are dazzling, it’s strangely unaffecting. It just doesn’t have the emotional pull of Richard Williams’s much simpler A CHRISTMAS CAROL (which I covered on Day One), or Disney’s earlier animated version of the story.

And honestly, what kind of monster casts Westley and Buttercup and doesn’t give them a single scene together?