It’s possible that tension is the hardest element of a movie for a filmmaker to create and maintain as they see fit. While there are multiple rules and proven formulas for injecting humor in a scene, eliciting pathos in a dramatic sequence, or even thrilling audiences with spectacle, developing a sense of tension takes a deft hand that is more about a sense of what is right and anticipating audience reactions than it is about following any patterns or previous molds. The Safdie Brothers’ UNCUT GEMS is an exceptional model that deploys, builds, and preserves a sense of tension from the opening shot to the closing credits. Powered by incredible performances from Adam Sandler, Kevin Garnett, Julia Fox, LaKeith Stanfield, and Keith Williams Richards, this anxiety-inducing maelstrom of a terrible person constantly making everything worse is a brilliant character study, an engaging story of various lowlifes, and one of the best films of 2019.

Howard Ratner (Sandler), is a man constantly on the hustle. A gift for gab and charm to spare, Ratner is a degenerate egotist who works in the jewelry district of New York City jeweler. His gambling issues spread beyond just NBA bets, including grifts with his friend Demany (Stanfield), a worrisome relationship balancing act with his wife (Idina Menzel), and his mistress/employee (Fox), and a precious uncut stone bought on the black market from Africa. As his bookies become more insistent that he pays up, and his schemes unravel at alarming rates, NBA superstar Kevin Garnett walks through the door and suggests a new angle for Ratner to take.

The Safdies’ GOOD TIME was a bold and intense cinematic experience filled with random twists, slick style, and its own share of constantly escalating problems for the characters. That film was somewhat hampered by the fact that too many people that cross paths with the protagonist are essentially innocent folks, or don’t recognize how the extent to his self-destructive and manipulative nature. UNCUT GEMS improves on that previous work by surrounding the asshole protagonist with equally scheming and despicable types, while also having a number of people calling Ratner out on being just the worst. This tweak makes audiences feel less like being unwitting accomplices to deplorable actions while also making it easier to simultaneously hate and root for Ratner. Viewers can hate him because he’s just an inept con man who barely stays afloat while constantly lying to everyone around him; but they can also root for him because it’s clear that he’s not alone in his awful ways in the corrupt world he is frantically moving through.

Sandler is incredible as Howard Ratner proving that, when he has good material and cares about a project, he can actually churn out a fantastic performance. The character has to be a papier-mâché Mephistopheles, a person that tries to exude confidence and control but is clearly a moron who is losing is grip on everything; but Ratner also has to be pathetic to elicit some humor and also some pathos as this is just a guy trying his best and can’t figure anything out, especially that he is his own worst enemy. It’s a layered performance that is grating, aggressive, subtle, and powerful all at different times and is the pin that holds this story together. 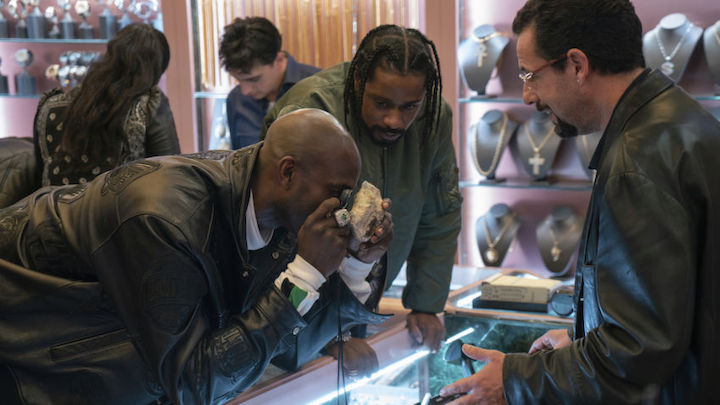 The supporting turns are also impressively engaging. Garnett is great as this version of himself who is a weird and superstitious dude that also likes playing the heel. The Safdies originally wrote this film many years ago, prior even to GOOD TIME, and so the NBA player in question was constantly changing depending on schedules and acting abilities — but clearly it was fated to be Garnett because he is incredibly mesmerizing on screen and a great pseudo-foil to Ratner. Julia Fox does great work as “Julia,” who is a bit of a cipher — it’s hard to tell exactly what she is thinking or her true motivations. Is she another sloppy con artist like Ratner? Is she naïve? Is she a fourth-dimensional manipulator? There’s enough in the script and in Fox’s acting that will leave audiences unsure for the vast majority of the film, which only ratchets up that tension. 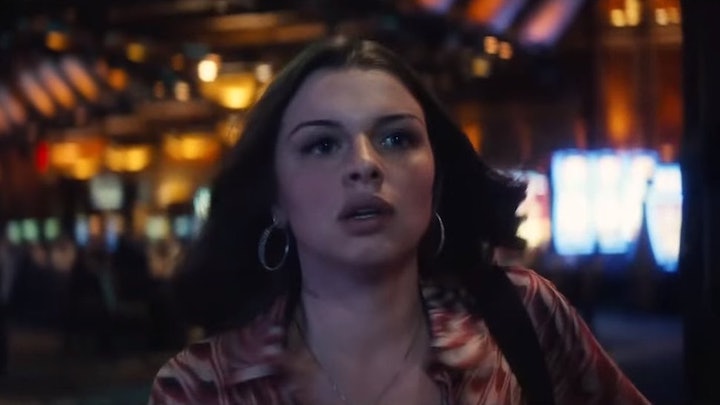 UNCUT GEMS is full of adrenaline but not in a rushed or frenetic way. Instead it’s more akin to a shark that has to keep moving or else it will die. That doesn’t mean it’s fast-paced—while it moves along at a clip, there are plenty of quiet scenes and comic interludes between moments of Ratner’s continuous downward spiral. But it constantly maintains that street hustle vibe of someone who is always moving, always spitting game, trying to sell their knockoffs or scam someone rube who just happens to be on the wrong sidewalk, with an eye always looking for that elusive “big score.” Ratner is a New York Jewish version of FARGO’s Jerry Lundegaard — constantly trying various doomed schemes who has seemingly chosen the easy path of tracking in lies, despite being pretty terrible at it. 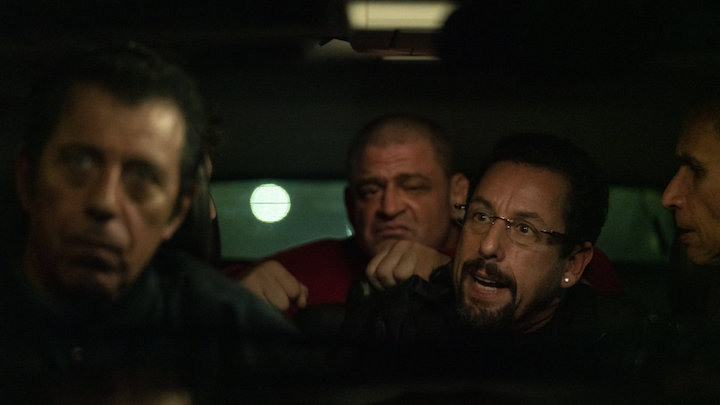 That cursed sense of every worsening conditions brings to mind other gritty character affairs with tightening nooses in films like THE GETAWAY and MACHINE GUN MCCAIN. The Safdies know exactly how long to dwell on terrible situations, when to allow a release with a joke or a different tangent, when to inject hope, and when to double down on the ever widening shitstorm that seems to be engulfing Ratner and everyone in his vicinity. UNCUT GEMS an amazing experience from gifted filmmakers who deftly appreciate what audiences need and expect, choosing to subvert those when necessary to intensify the tension and leave viewers as entertained as they are racked with panic. 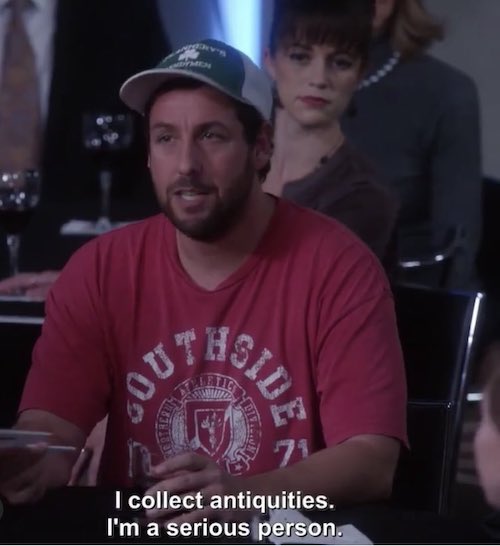