Home  ⁄  The Wire  ⁄  [NOW ON BLU-RAY] SLAUGHTERHOUSE-FIVE: We’re All Unstuck In Time

Director George Roy Hill had some major reservations when he was asked to adapt Kurt Vonnegut Jr.’s 1969 existential science fiction novel Slaughterhouse-Five for the screen. And who wouldn’t? Kurt Vonnegut Jr’s narrator, basically an omniscient version of himself, is so essential to the novel that to abandon it, as any film adaptation would have to do, seems like a ludicrous proposition. We are, after all, inside the narrator’s head in an intimate way that defies the realistic gaze of a camera. But screenwriter Stephen Geller was sure that he could figure it out, and when he delivered his screenplay, Hill was on board.

Plenty of great literature isn’t immediately welcoming to screen adaptation. Literature is hyper-focused. One word, one sentence at a time that directs the mind to very specific images. Film bombards the mind with more information than it can possibly take in at once. Slaughterhouse-Five is difficult to adapt, but not impossible, and if we experience both the book and the film, we can gain insight into the strengths of two very different media. Indeed, Geller’s screenplay works so well because he understood that he was translating the novel from sound to vision. Years later, David Cronenberg used the same method to adapt another “unadaptable” novel with his NAKED LUNCH film.

Michael Sacks plays Billy Pilgrim, a man who has become “unstuck in time.” One moment he’s in Dresden during World War II, where he’s a POW leading up to, during, and after the allied bombing that almost completely destroyed the city and left over 35,000 people dead. The next moment he’s a middle-aged optometrist with a boring upper middle-class suburban life, and married to a wife that he appears to care less than nothing about. In another moment he’s a zoo exhibit on the planet Tralfamadore, being observed by creatures that live in the fourth dimension. 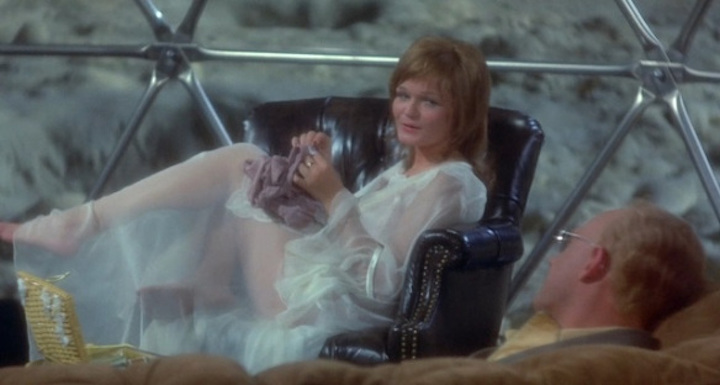 Pretty heavy stuff, and I suppose there’s a case to be made that the Tralfamadore scenes are all part of his imagination. After all, the very passive Pilgrim, who bumbles through life as a mostly disinterested observer, ends up in a sort of paradise—a recreation of a small middle-class American bedroom—where he doesn’t have to do anything all day and his only companions are his trusty old dog and beautiful actress that Billy first saw in a Playboy magazine he’d confiscated from his teenage son. In a way, all of his wishes have come true.

In a sense, SLAUGHTERHOUSE-FIVE is a study of psychological realism, in that humans are constantly, through imagination, projecting ourselves into the future, often imagining the best-case happy ending scenario for ourselves. And the past? We’re constantly traveling to past periods in our lives, often without warning. Visual stimuli lead to associations and suddenly there we are, in the middle of the supermarket or work, thinking about someone, something, some incident or memory more or less spontaneously. Something we’d seemingly forgotten up until then. And Billy’s unstuck-ness reflects this. Every time Billy travels forward or backward in time, the next scene always has something to do with the previous. The water from a shower in a prison camp phases into the water from a shower in a gym where a five or six year old Billy is grabbed naked by his father and tossed into a swimming pool as he laughs and says, “Sink or swim!” 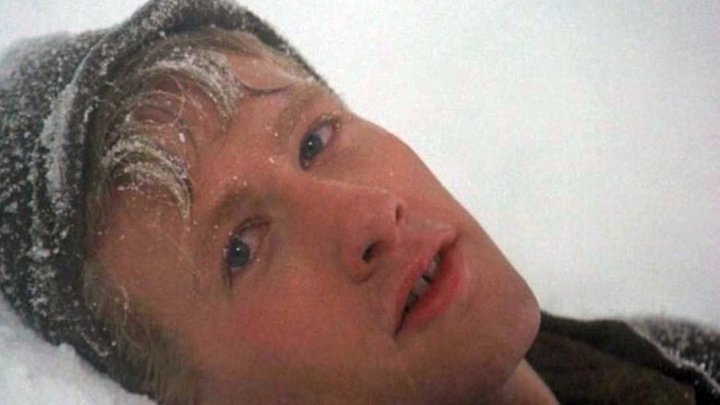 I know this might have been a bit of a tangent, but for me, this was always one of the more important things in the book – it was one of the most psychologically realistic books that I’d ever read, and I think the movie captures this feeling in an aesthetically different but philosophically similar way.
It takes a special kind of actor to make a believable performance out of a guy who completely disappears into the scenery. Or maybe not. Michael Sacks had thirteen film and TV roles after SLAUGHTERHOUSE-FIVE, but nothing significant. Maybe this was just his natural personality. After all, when acting didn’t work out, he went into finance. Either way, it works. The film required a strange kind of performance, and that’s exactly what we get.

Sacks was technically the leading man, but this certainly wasn’t a very “sexy” part, which partially explains why George Roy Hill went with an unknown. Any established leading man would certainly have turned down a role where, well, he doesn’t do much of anything and is supposed to be as unnoticed as possible. So it’s a strange situation – without any other performances to compare this to, it’s hard to assess Sacks as an actor, but whatever he does, it works. He very convincingly plays a man who lays down and lets the world walk all over him. 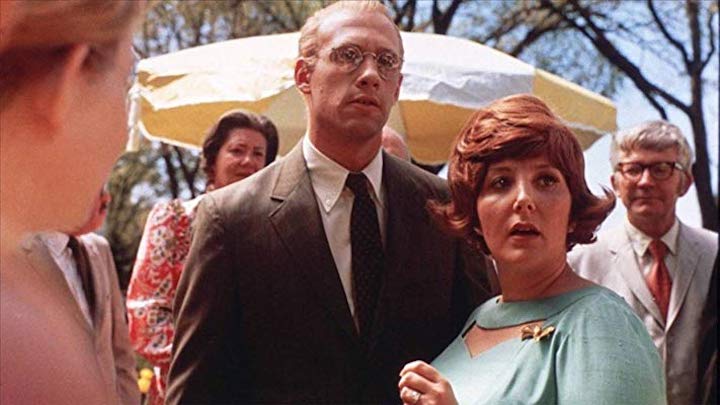 All of the actors are very good. The main thing is that they realize what kind of movie they’re in. It’s comic, it’s satire, it deals in archetypes. After all, satire often works best when it’s at its more cartoonish. Because it’s not a matter of being critical of individuals as much as the characters are avatars for entire groups of people. Each actor seems to instinctively realize that they’re playing a population of thousands within their single character. And this is a big reason the movie works so well.
Though George Roy Hill mostly stays out of the way of the story, there are some stylizations that make the film very visually interesting at times. Particularly striking are the Dresden scenes, before and after the firebombing. As the men are marched through the city by a Nazi officer, they’re in awe of the incredible architecture surrounding them. The camera cuts from medium shots of their faces to closeups of the buildings, many of which were crafted long before America was even a colony, which are tragically breathtaking. This, contrasted with the extreme wide shots after the bombings where there is only rubble and rows of corpses makes for the most heartbreaking moments in the film, and its power lies completely in the visuals.

Hill also does a great job during the bombing scenes, when the Allied soldiers were huddled together in an underground section of a slaughterhouse (the titular fifth slaughterhouse). You get a real sense of how terrifying the experience would be, with the lights flickering and pieces of the ceiling falling down and then finally total darkness, to be caught underneath all that, especially when the lights go out and the bunker could collapse at any second, leaving the soldiers buried underneath the rubble. 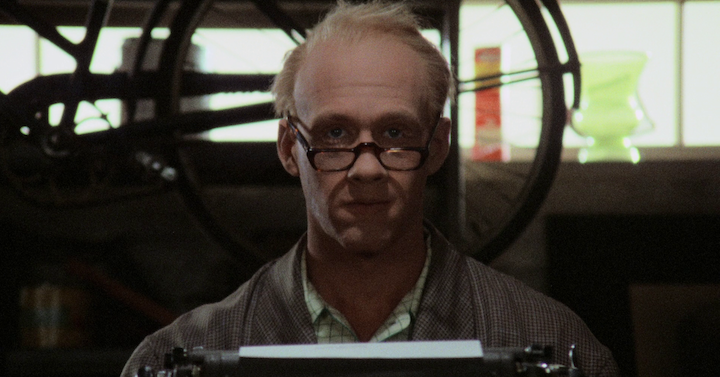 SLAUGHTERHOUSE-FIVE doesn’t have a very flashy style, but Hill very much succeeds in some of the less appreciated aspects of directing: choosing an excellent script and cast, a very competent DP, and an excellent set designer.

The special features on this new Arrow Video release include a nice audio commentary by Troy Howarth. One of the more interesting things I learned from this commentary was that Guillermo del Toro at one point wanted to do his own adaptation of the book, though unfortunately it fell through. It doesn’t look like that film will ever get made, which is a shame, because I’m sure it would be damn awesome. 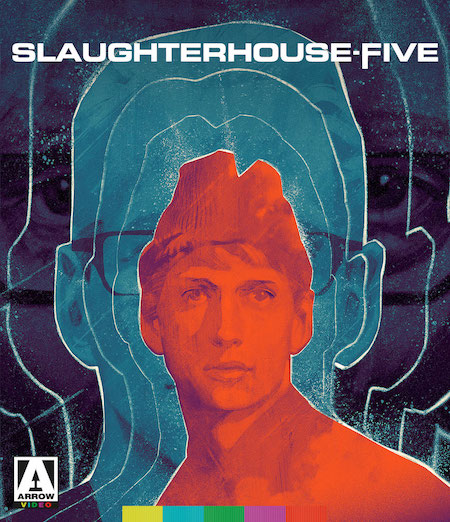 There’s also a video interview with author and critic Kim Newman. He seems to be on just about every Arrow release nowadays, which I’m I’m fine with. He’s always super-knowledgeable and enthusiastic about the material. His always sits on his couch with a big smile and tells stories about the movie.

I’ve always liked SLAUGHTERHOUSE-FIVE, and I’m very happy to have this special edition in my collection now, but if you haven’t seen the flick, I’d recommend renting it digitally (it’s on Amazon Prime and iTunes) before making the decision to purchase this disc. It’s definitely not a movie that’s going to appeal to everyone, even people who regularly buy the stuff Arrow puts out. It’s mainstream, experimental, terrifying, nonlinear, and sometimes takes a clinical approach to the material. Those who like it are really going to like it, though, and the included special features make this a good buy.