Join us for our year-long celebration of the USA World Premiere Movie in conjunction with Made-for-TV Mayhem! Check out out previous entries on THE FORGOTTEN here, MURDER BY NIGHT here, THE TICKET here, SNOW KILL here, DEADLY GAME here, ACCIDENTAL MEETING here, HITLER’S DAUGHTER here, ARE YOU LONESOME TONIGHT? here, AS GOOD AS DEAD here and MURDER ON SHADOW MOUNTAIN here!

First published in 1973 and notably collected in “Night Shift,” Stephen King’s short story “Trucks” is a swift, efficient tactical strike of a story, with six clearly defined characters and a situation that’s set up, explored, and then given an ominous ending.  It’s King at his best as a short story writer, one who knows how to explain a spooky premise, briefly come up with reasons why it’s spooky, and get the hell out.  It’s so quick and methodical that it could be reduced to a Tweet:

The short story was notoriously taken on by King himself when it came to making his directorial debut (and, to date, swan song) MAXIMUM OVERDRIVE in 1986, throwing in a lot of ridiculous trucks and over-the-top caricatures and set to the music of AC/DC.  It’s a goofy film, but it’s not without its charms even if King has said that it’s the worst adaptation of his work.  Like a lot of films that are pitched about two levels higher than they should be, time has been kind to MAXIMUM OVERDRIVE, and it’s more recently been embraced as a reluctant cult film.  (Though, really, at this point pretty much every horror movie made in the ‘80s has a cult following.  I’d make a joke about midnight movie revivals of HIDE AND GO SHRIEK or PULSE if I didn’t think they’d actually happen.)

For a while, however, MAXIMUM OVERDRIVE was lost to obscurity – so lost, in fact, that filmmakers decided to take another stab at the short story in 1997.  A Canada-shot joint production between the then-burgeoning Trimark Pictures and the USA Network, TRUCKS returned to the original story’s title and, due to a more limited budget, suggested a stripped-down, more back-to-basics adaptation of the original story.  There would be no Green Goblin trucks or awkward comedic scenes of Stephen King at a vindictive ATM. 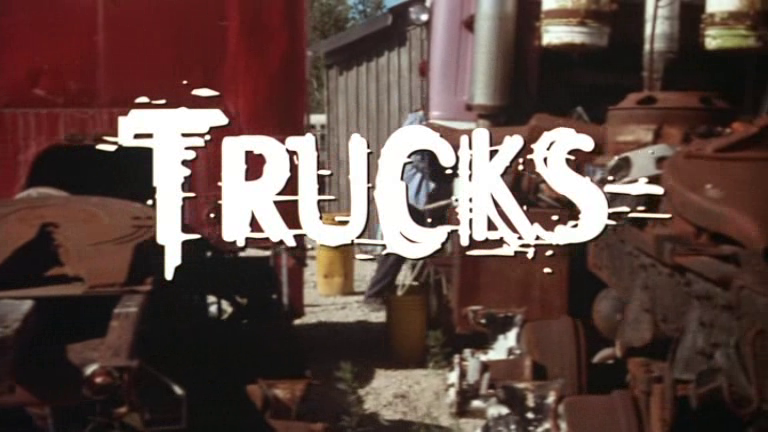 The story of mysteriously sentient vehicles on a rampage would seem perfectly at home on the small screen – after all, this was the format that gave us DUEL and KILLDOZER!  (Not that KILLDOZER is a good as DUEL, but DUEL never had a comic book adaptation or a noise rock band named after it, so points: KILLDOZER.)  Since you can make an evil vehicle look mysterious and possessed by the use of clever editing, with a good eye behind the camera and a solid screenplay that slowly builds tension, a lower budget shouldn’t be an issue!

Man, I wish they’d gotten that for TRUCKS.

TRUCKS stars Timothy Busfield as Ray, a mechanic who’s recently moved to the small town of Lunar, Nevada with his son Logan (Brendan Fletcher, last seen on this site in our ranking of Freddy Krueger victims) after the death of his wife.   His prospective love interest comes in the form of Hope, a tour guide who specializes in hiking played by DEMON KNIGHT’s Brenda Bakke, who begins the film by welcoming her newest clients, a hardass military man (Roman Podhora), his insanely unpleasant daughter Abby (Amy Stewart) and a new age fellow that appears to be modeled on David Crosby (Jay Brazeau). 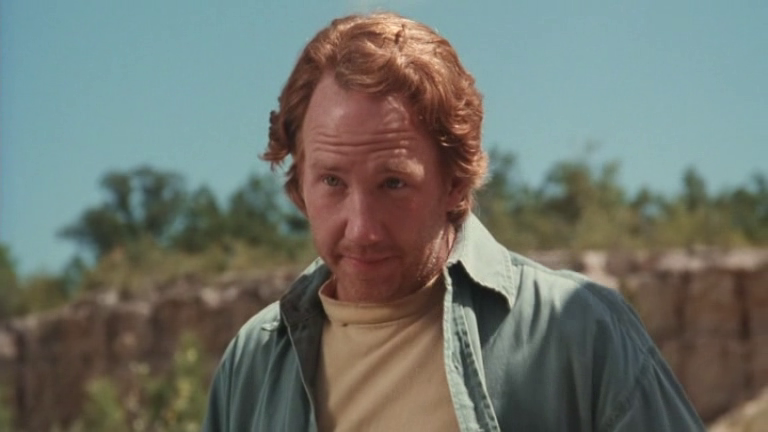 The cast is rounded out by a diner cook, a pair of unpleasant truckers and an unpleasant bickering couple, and after some initial unpleasant bickering between everyone involved, they all end up at a truck stop as the vehicles around them begin to take on lives of their own and start going after human prey.  Pretty much everybody in the cast is unpleasant and/or a stereotype, with only Busfield and Fletcher, giving performances much better than anything in the film warrants, coming off as credible characters you’re actually concerned about.

Fletcher’s Logan getting involved with the army brat Abby is especially troublesome, as Abby is a complete waste of a character that resembles Mary Stuart Masterson in SOME KIND OF WONDERFUL, gloating about the schools she’s been kicked out of and insulting others’ fashion choices.  It’s not Stewart’s fault her character grates on the nerves almost immediately (I mean, she looks like Mary Stuart Masterson in SOME KIND OF WONDERFUL, so she’s obviously awesome) but she’s clearly just given time with Logan because every major character has to be paired up.  Granted, she does become more tolerable as the havoc starts happening, but starting her off at a point of “troublesome yet likeable” would have been preferable to having her just throw uncharismatic bile at every character on screen for the first act of the film. 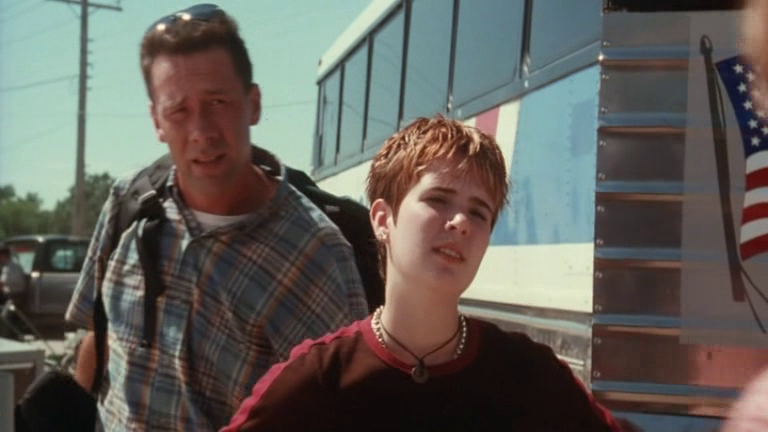 The situations that the evil trucks put our mostly unpleasant heroes through aren’t bad, with the truck stop under siege and the humans desperate to regroup and escape, but director Chris Thomson (who helmed the underrated Bryan Brown thriller THE EMPTY BEACH along with the teleflick SWIMSUIT: THE MOVIE) doesn’t give the proceedings much of a sense of tension, and we never really get a sense of the scope of where the trucks are in relation to their intended victims.  We do, however, get plenty of shots of side view mirrors being adjusted.

Yes, TRUCKS’ main contribution to the genre of sentient vehicular manslaughter is the attempt to make side view mirrors frightening.  We can tell the trucks are watching us by the way the side view mirror ominously tilts, and then moves back into position when looked at.  This actually happens multiple times. 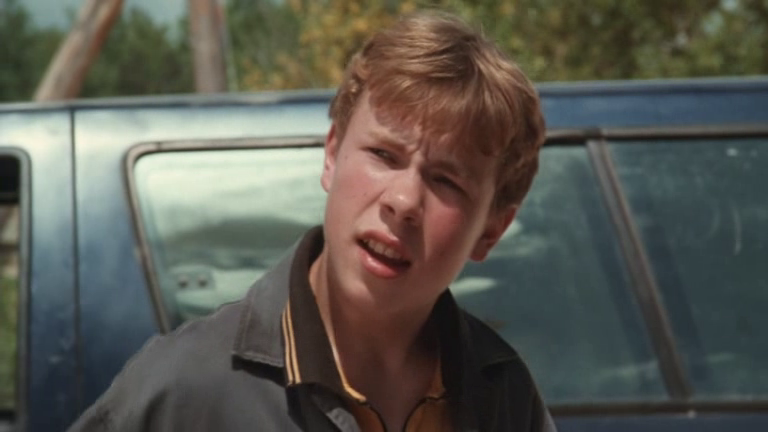 Like the original story, TRUCKS doesn’t give any exact explanation as to why the trucks are moving on their own – there’s mention of a toxic cloud, a cosmic shower and Area 51, but none of it seems conclusive.  Unfortunately, because the information comes from varying sources (a television report, the military man’s background and idle chatter), it doesn’t feel like the film is trying to deflate expectations that we’ll find out the truth as much as it is confused about how to do it.  NIGHT OF THE LIVING DEAD is still the gold standard in inexplicable chaos – by the news reports just theorizing rather than stating regurgitated “facts” they’ve been given, the source of the contagion is acknowledged as unknowable.  TRUCKS feels as though it’s straining for multiple explanations just to make sure at least one sounds convincing.

But I haven’t gotten to the silliest part. 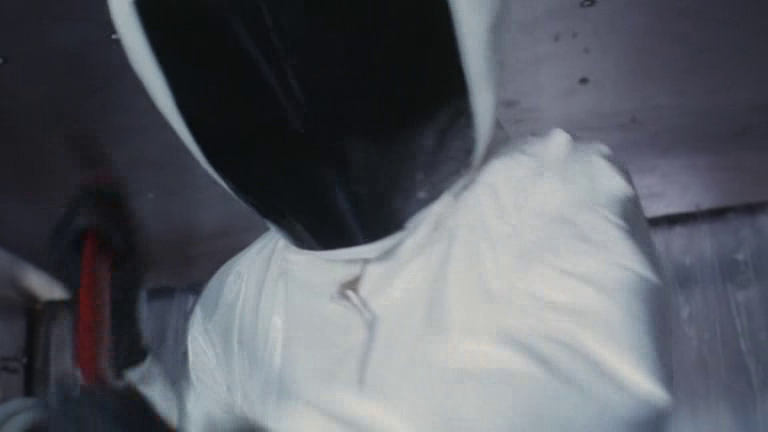 As I’d mentioned, TRUCKS was a co-production between Trimark and USA.  The version that I’ve talked about above represents the version that aired on the USA Network in 1997.  It’s not very good.

For the video release, however, additional footage was shot via producer William Wesley (SCARECROWS).  The original TV-movie cut is fairly non-violent, features no graphic gore and is essentially limited to the characters in the truck stop.  The new footage adds a number of different scenes with characters that never interact with the rest of the film, killing them all off within the only scenes they appear in.  And we’re back to the MAXIMUM OVERDRIVE moments where Stephen King fights with an ATM, only sillier. 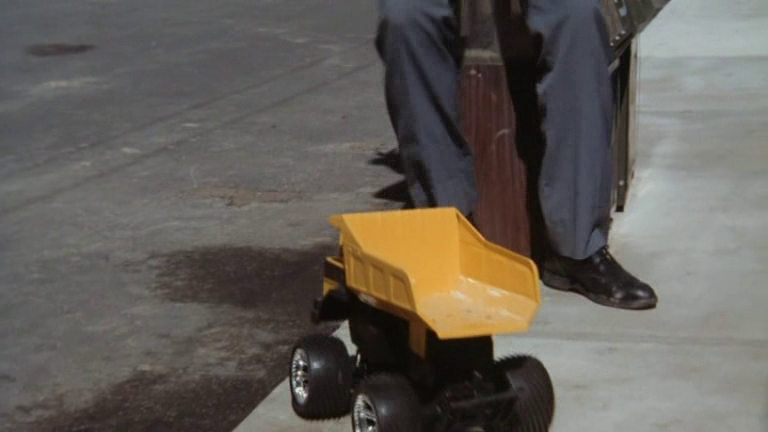 In the first of these sequences, a mailman faces off with a toy truck (YES TOY TRUCKS ARE NOW POSSESSED AS WELL DON’T ASK IT’S SCIENCE SHUT UP) and ends up getting killed.  In the second, a HazMat suit is filled up with oxygen via, er, a possessed oxygen machine (I SAID SHUT UP) and kills a couple workers with an axe that… ugh, you know, I’m not even going to try to understand.  A cable repair truck goes nuts as well.

None of these scenes share the same tone as the rest of TRUCKS, being significantly more graphically violent and simultaneously campier than anything else in the film.  It’s a weird Frankenedit of a film, and it’s the only one currently available on video.  (The film also turns up on the Syfy Channel, and I’d imagine it uses the shorter, USA cut.) 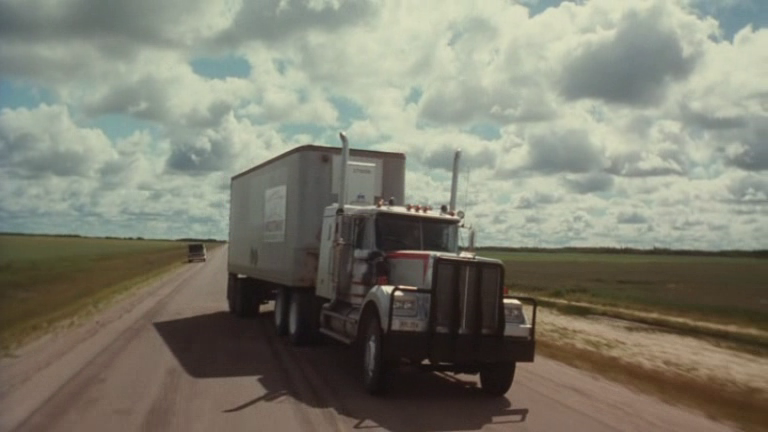 There is a certain fandom for TRUCKS out there — someone even maintains a Facebook page devoted to it.  It’s hard to argue that the concept of ominous, driverless killer trucks is a good one, and who knows, maybe someday there will be a great film adaptation of “Trucks.” (There’s a not-bad short film version that was made as one of Stephen King’s Dollar Babies.)  But TRUCKS sure as hell isn’t it — Vulture’s Gilber Cruz even ranked TRUCKS last on the list of King television adaptations and it’s kind of hard to argue, mostly due to the fact that as a rule, King adaptations tend to be at least fairly mediocre.