Somewhere, somehow, there must exist a guide to what to do when you’re being murdered, kind of a “Heloise’s Hints for the New Homicide.” Or else, how would you know it’s rude to call your killer by name? It’s the only explanation for why you always see victims wandering around an isolated location as the camera’s slow POV shot moves toward them, only to have them exclaim, “Oh, it’s you! What are you doing here?” or some such pleasantry right before hands reach from what appears to be behind the camera to strangle, stab or shoot them. Why do they never call them by name?

If an acquaintance were walking up to you in a shrouded area, would you not say, “Hey, Bob” and maybe extend a hand, or at least a wave? (I mean, you wouldn’t say “Hey, Bob” if their name was Glenda, but you get the point.) It’s as though the future victim is aware they’re about to get murdered and decides to not identify their killer out of respect, if not for the person who removes them from this mortal coil, then for the audience, who would otherwise find the mystery they’re enjoying quickly solved.  Why that’s… 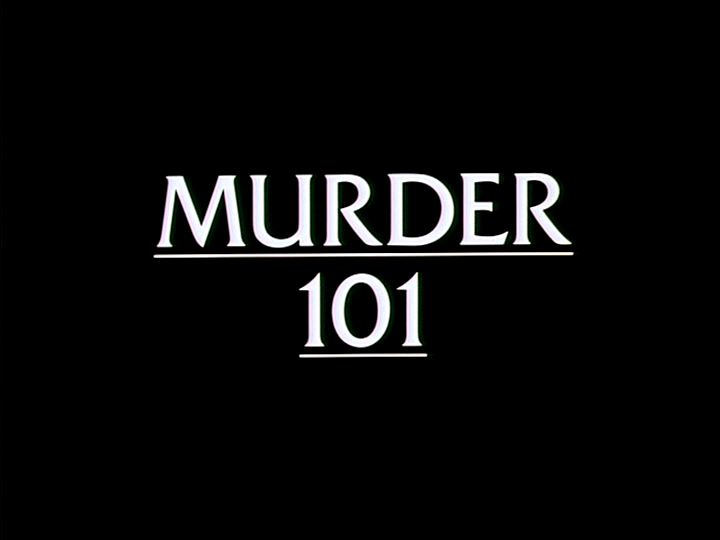 It’s a trope that’s kind of inevitable in mystery films, because while we want to see the murders take place, we also don’t want the identity of half of those involved with the scene to be known until the climactic reveal. It’s also a trope that appears in MURDER 101, a USA World Premiere Movie that first aired on March 20, 1991 (shot under the title MURDER PERFECT), and while it’s not actually examined in the film, it easily could have been.

MURDER 101 is directed by Bill Condon, who had come from writing the lovingly-made genre efforts STRANGE INVADERS, STRANGE BEHAVIOR (aka DEAD KIDS) and SISTER SISTER, directing the latter. He’d later go on to direct the likes of GODS AND MONSTERS, KINSEY, DREAMGIRLS and the Julian Assange film THE FIFTH ESTATE (as well as the final two TWILIGHT films, but whatever), but in the early ‘90s, he was the master of the USA Network. MURDER 101 was the first of five (!) films he directed for the channel, and his name on a project would come to ensure that you’d get the network’s specialties at their best. 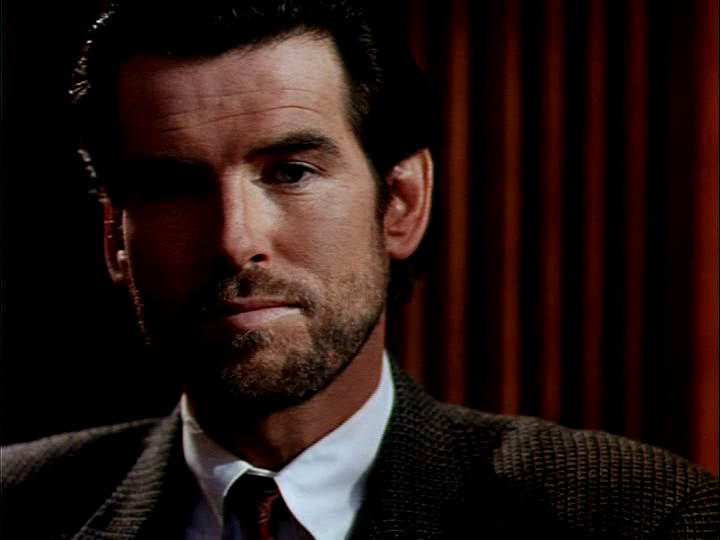 It’s not surprising why MURDER 101 is one of the most easily-available films in the USA Network archives, with a couple of DVD releases and frequent airings even now. It’s one of the best-made films in the series, with solid performances and enough twists and turns to keep an audience interested without straying from the classic B-movie nature of the plot. (People Magazine didn’t seem to like it, but they’re getting rid of their reviews anyway, so they can go fellate a Kardashian.)

In MURDER 101, Pierce Brosnan, in the first of four USA Movies himself, stars as Charles Lattimore, a mystery author whose most recent work is a true crime novel based on the case of a husband’s alleged murder of his wife. (I say “alleged,” but he’s convicted at the beginning of the film, so “alleged” just refers to the question of his innocence within the movie itself. Fiction about fiction about fact gets so tricky sometimes!) He’s also a college professor, teaching the young bucks of today all about how to properly write mysteries, with their first major assignment being the planning of a perfect murder. 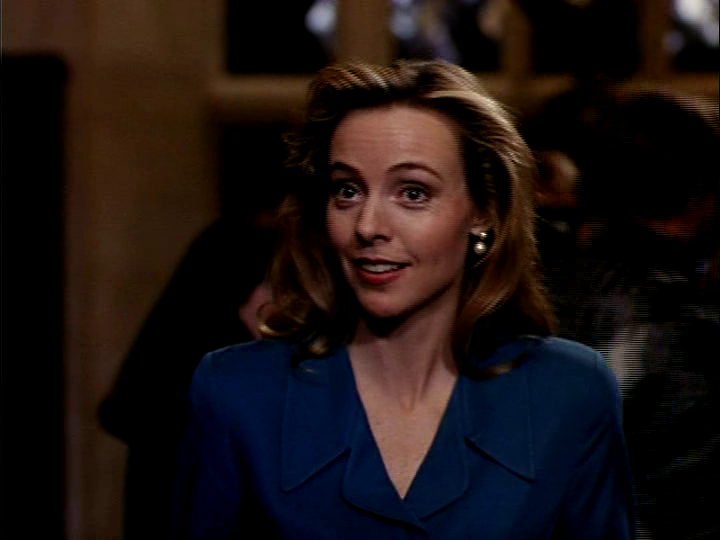 His life is complicated by a tricky separation from his wife Laura (ROCK’N’ROLL HIGH SCHOOL’s Kate Rambeau herself, Dey Young) who’s attempting to leave him for English department head Henry (character vet Mark L. Taylor), and made even further problematic by his students’ impressive resolve in making their assignments count. Robert (Raphael Sbarge) is intent on questioning the case he’s most noted for, and Francesca (Kim Thomson) plans to enact her own scenario, involving meeting Lattimore at a motel room disguised as his wife.

Francesca’s plan to get an ‘A’ goes awry, however, and not just because Lattimore predicts her scenario in advance. While Lattimore explains the literary issues with her set-up in the bathroom, she ends up strangled to death by an unseen assailant. Lattimore realizes he’s going to be framed and runs off, squirreling his way out of questions from his friend, Lt. Mike Dowling (Antoni Corone). 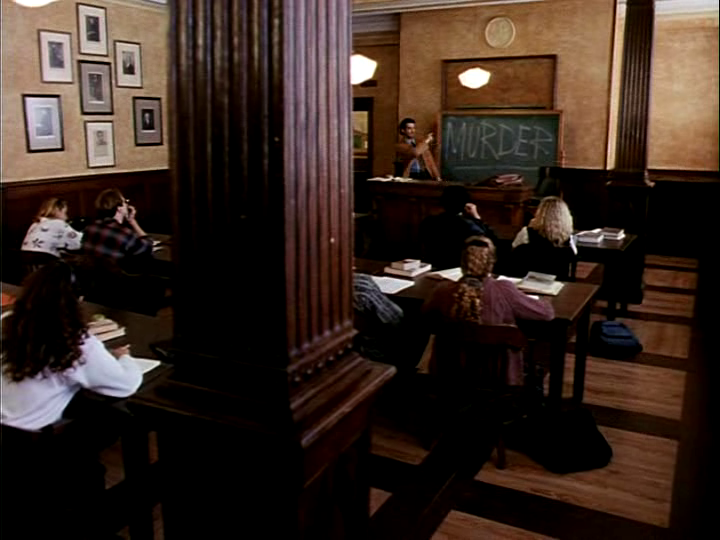 The twists and body count continue to increase, but MURDER 101 is engaging enough to not warrant further spoilers, thanks to a clever script by Condon and mystery writer Roy Johansen. Lattimore’s occupation as the instructor of mystery writing is used to solid effect, especially in a moment where he’s on the run from a crime scene and jumps into his classroom, asking his awaiting students for conceptual advice on how to get away from a chase sequence!

“This is all so complicated,” Lattimore says as the plot escalates to the point that are too far-fetched for reality but perfect for a USA movie, and while that’s true, MURDER 101 never overcomplicates to the point of confusion, staying within the applicable confines of the TV-movie thriller. Condon’s direction is just stylish to warrant your attention (especially with the opening sequence of a bloodied woman crawling up the stars, her red-laced hands grasping for the phone) without demanding it, making it just about the perfect afternoon time killer. Best of all is a well-cast Brosnan, who nails exactly what you want in a TV-movie lead – he’s handsome, likeable without being smarmy, and convincingly imperiled without delving into histrionics. 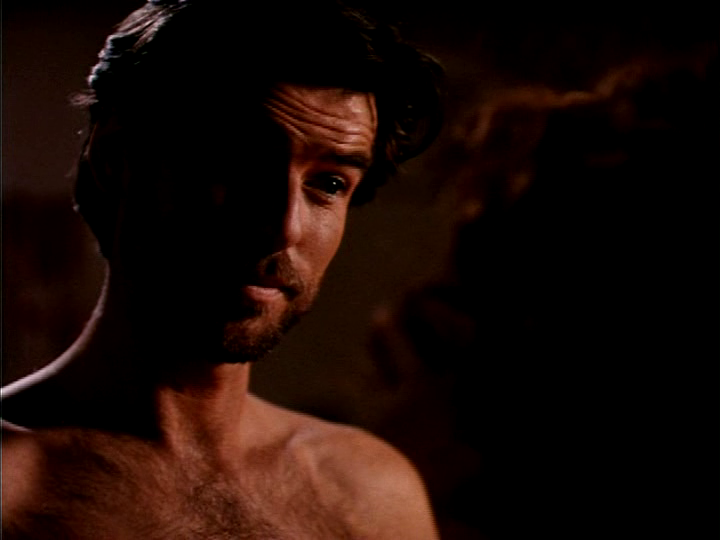 MURDER 101 isn’t some underrated classic, and it doesn’t have a damn thing to say, but it’s another perfect example of what a USA World Premiere Movie should be – if you look at the trailer, you’ll know what to expect, and you won’t be disappointed. It’s simultaneously ridiculous and clever, entertaining and familiar, and something you’ll be perfectly comfortable having on while you fold laundry, but won’t be too concerned about if you miss a few minutes of while you feed the pets.

In other words, the USA World Premiere Movie at its best.