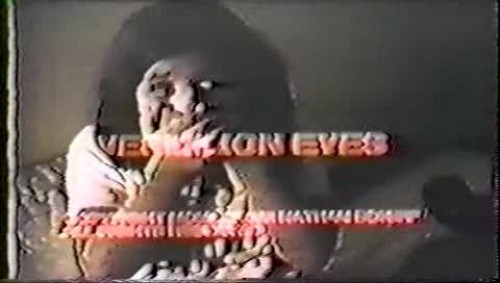 To be honest, I was pretty certain that the little retrospective I’ve been doing on the career of Long Island super-8 maestro Nathan Schiff was going to be incomplete. That’s because even though he made one more movie after THEY DON’T CUT THE GRASS ANYMORE, namely 1991?s VERMILLION EYES, Image Entertainment chose not to release it as part of their “Cult Cinema Collection” DVD series (under the auspices of which they’ve released all of his other work), even though they’d remastered the entire film, partially remastered the score, filmed cast and crew interviews to be included as extras, and even recorded a commentary track with Schiff himself for the film. In short, it was pretty much all ready to go, and they pulled the plug.

This, of course, only made me more determined to see it. Reasons for why Image yanked the rug out from under their own release vary — they told Schiff they had “legal” concerns about it, but he’s stated that he feels this was a ruse since no companies, products, etc. that might have a legal objection to it are in any way referenced in the film. IMDB states that it was pulled due to its excessive sex and violence, which made the suits at Image uncomfortable. Hardly a shocker, I suppose — in fact, I’m perfectly comfortable saying that would be a gutless-but-unfortunately-understandable move. And yet it’s considerably less violent than THEY DON’T CUT THE GRASS ANYMORE, and probably even somewhat less violent than Long Island Cannibal Massacre — although in fairness there’s still plenty of splatter and slow-burn disembowelment on display here, and frankly it’s executed a lot better, and with more sadistic and serious intent. Schiff’s use of prosthetic innards and fake gore having improved dramatically between 1985 and 1991 and his nihilistic viewpoint having obviously both broadened and hardened over that interval as well (but more on that later), and while the insertion of an openly sexual component into Schiff’s work is admittedly a new one, there isn’t too much nudity on display here, and what little there is can hardly be considered prurient or titillating in any way (at least if you’re of sound mind). In another interview on the matter, Schiff stated that he felt the film’s humorlessness and experimental style was probably the reason Image ultimately took a pass on the flick, and frankly, that strikes me as the most believable theory of the bunch, because this is a damn difficult film to get a grip on for a variety of reasons and is, in many ways, downright impenetrable. But hey, that didn’t stop FINNEGAN’S WAKE from becoming a literary classic. 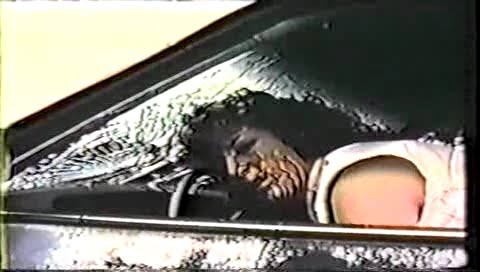 My desire to see this film turned into outright obsession, though, when I learned that it was never even released on VHS, nor were bootlegs of it sold and/or traded around in anything like the numbers they were for the rest of Schiff’s work from Weasels Rip My Flesh onwards, so apparently this was one of those things that our guy Nathan was perfectly content to just break out his Super-8 camera and film — the idea of actually distributing it in any way so that anybody else might actually get a chance to see the thing never even seemed to occur to him.

Now, I have to ask at this point, my friend — who makes a film just for the sake of making it? To me that sounds like an exercise in therapy more than anything else — Schiff just had to get this thing done in order to expunge something very personal from his system and, hopefully, achieve some sort of mental and/or emotional catharsis as a result. Such was my going theory, at any rate. And whaddaya know, I was right. Thanks to the kind intervention of a reader of this very site who figured I would be interested in seeing it, a ripped-right-from-a-lousy-VHS-dub-of-the-film DVD-R arrived as a “loaner” in my mailbox the other day (it’s on the way back tomorrow, Bill, and thanks!), and now I can count myself among the — uhhhmmm — “fortunate” few who have seen this truly obscure piece of cinema. I probably won’t spend a tremendous amount of time on this write-up since there’s not much point to writing a lengthy review of a movie that nobody reading this will ever see (you could fairly argue that there’s no point in spending any time on it at all, but hey, I’m a completest), but I will say this — VERMILLION EYES is one of the most harrowing, deeply personal, and downright disturbed (as well as disturbing) things I’ve ever seen committed to film, and I can see both why Schiff felt compelled to make it, as well as why he’s apparently quite comfortable with the idea of pretty much no one else ever seeing it. VERMILLION EYES is the story of an unnamed man (literally — the credits list star John Smihula’s character simply as “The Man”) who has vivid dreams of sex and death in uncomfortably close proximity to each other and has a habit of going around to gruesome death scenes with his Super-8 camera and documenting what he finds there. After some little while though, that’s just not enough and he begins arriving at his carnage-strewn destinations in a hazmat suit and making off with loose body parts. Eventually even that can’t (or won’t) satisfy our protagonist and he begins committing murders himself. Slowly. Painstakingly. Gruesomely. Even though the copy of this film I saw looked like absolute shit, it’s still clear that the gore on display here in the usual Schiff “take-their-heads-apart-slowly” scenes is light years more advanced than anything in his previous efforts (it’s also worth mentioning that Schiff’s skills at scene composition — to the extent that he even had any before — have taken a quantum leap forward here, as well, with the standard “point-and-shoot” of his prior work giving way to vast, expansive (well, as “vast” and “expansive” as Super-8 can get, at any rate) vistas of bleak and barren Long Island fields, beaches, roads, etc. that provide a perfect visual representation of his protagonist’s desolate inner landscape) and the targets of “The Man‘s” predations (one of whom is his own sister) make it all the more disturbing. 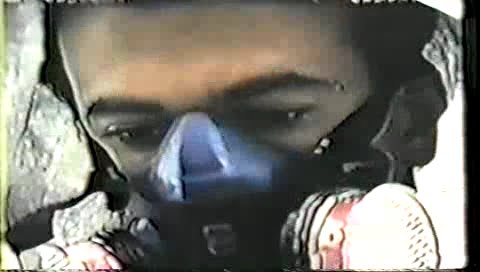 The usual gut reaction here would be to dismiss this all as the usual B-movie misogyny, given that each and every one of “The Man’s” victims are women, but it seems pretty clear that Schiff has” progressed,” if that’s the term we want to use, from hating only wealthy elites in LONG ISLAND CANNIBAL MASSACRE to hating anyone with money and status in THEY DON’T CUT THE GRASS ANYMORE, to hating pretty much all of humanity, especially himself and his morbid sexual longing for violent death leads him to focus his outbursts on the fairer sex (if Schiff were gay, I’m sure his cinematic victims would be men). So I’m gonna give Nathan a pass on the misogyny rap here — that would be too simple.

In truth, he’s expressing a deep-seated hatred for the entire human race, and a sense of righteous repulsion at his own desire to still have sex with members of a species he has nothing but disdain for. This goes way beyond garden-variety misogyny — this is an exercise in unrepentant and unfettered nihilism of the highest (or maybe that should be lowest) order. Much like THEY DON’T CUT THE GRASS ANYMORE, there’s no real “plot” here to speak of, yet the character of “The Man” does have a trajectory — he dreams of violence, then seeks out scenes of violence, then keeps mementos from said scenes of violence, then commits violence, all of which culminates in a frenetic and quite-likely hallucinatory (how much of any of this film is “real” and how much is taking place solely in his stand-in/protagonist’s mind is an open question that Schiff never really answers, hence the “experimental style” he, and by extension me since I was paraphrasing the guy, referred to earlier) orgy of blood, viscera, and sex (here’s where we find most of the film’s nudity that Image claimed to be nervous about) that marks both the film’s climax and “The Man’s” final descent into oblivion. It’s uncomfortable to watch (and keep in mind that the copy of the film I saw was so bad that it’s not always easy to tell what’s even happening!) to say the least, and will leave most sane viewers feeling like empty, hollowed-out, shell-shocked vessels of flesh and bone. “Feel-good” viewing it most assuredly isn’t. 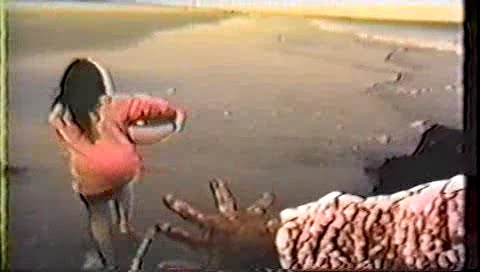 And yet — even though it’s decidedly mean-spirited and deadly somber in tone, you can’t help but respect what Schiff’s trying to do here, especially since he didn’t seem to make this movie with the intent of anyone actually seeing it , consequently giving the entire proceedings the feel of the work of a man desperately trying to get something awful out of his system before he does something he’ll regret. If serial sexual psychopaths like John Wayne Gacy or Ted Bundy decided to get some friends together (and I’m willing to bet that Schiff had a much more difficult time rounding up his usual Long Island accomplices this go- around — props to Smihula, especially, for being willing to star in a project like this) and make a movie as a last-ditch attempt to work out their issues before they started killing, I honestly wonder if the end result wouldn’t end up looking a whole lot like VERMILLION EYES.

In summation, I’d be tempted to call this movie a cry for help, but given that he didn’t seem to care whether or not anyone was listening, I think my original guess that Schiff was looking to achieve some sort of catharsis just by making VERMILLION EYES and getting his most morbid fantasies (and fears — often there’s not much difference between the two) committed to film is a pretty accurate one. He never went on to commit any crimes (or, unfortunately, to make any more feature-length films), so I’m optimistic that making this thing did the trick and he’s feeling a whole lot happier now. If this ends up standing as his last cinematic effort, then we can view the entire trajectory of his film career as one long, slow (and yes, ultra- low-budget) mental breakdown played out in front of a Super-8 camera that ends with him finally, hopefully, expunging all the demons that were clearly eating him up from the inside out before going on to do something else with his life. As with all breakdowns, it wasn’t always easy to watch, especially this last, desperate attempt at cleansing his system, but it was almost always fascinating, even if only as an indulgence in morbid curiosity. It’s hard to believe that Weasels Rip My Flesh and VERMILLION EYES were even made on the same planet, much less by the same person, not only because the technical progression from point A to point B was rather remarkable (the same Super-8 camera aside), but because they seem like products of two entirely different minds when you consider that the first film in Schiff’s oeuvre was an innocent effort at monster-movie homage filtered through the haphazard, low-attention-span sensibilities of a 17-year-old kid, while his last reflects the outlook of a guy seems to believe that quaint concepts such as “innocence” are long since dead and buried — to the extent that they were ever real, or frankly even possible, to begin with. Each step on the journey of his celluloid-recorded mental deterioration offered something interesting to see, even if THEY DON’T CUT THE GRASS ANYMORE veered a little too deeply into self-indulgent territory for my tastes, so Nathan Schiff, wherever you are, thanks — and I sincerely hope you’re doing okay.