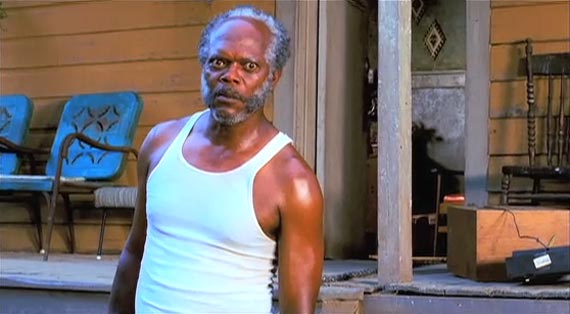 The DJANGO UNCHAINED marketing train left the station last week with the first one-sheet for the film and as we wait for the next stop on the tour that takes us up to Christmas day (the film’s release date). Until then, we have some verbiage from Sam Jackson who is making the rounds for THE AVENGERS.

“It’s a Tarantino movie so there’s no thought that goes into, ‘am I gonna do it or not?'” says Jackson of his reaction to the opportunity. “It’s kinda like, ‘I’m doing that,’ because I know it’s going to be great. It’s definitely an opportunity to explore a place in my history that I haven’t thought about,” says Jackson who plays a slave owned by Leonardo DiCaprio’s Calvin Candie “and deal with it in an honest and very dramatic way.”

“Quentin pays homage to a lot of different genres,” says Jackson. “He would like to say this is a spaghetti western, and I guess in ways it is. And I guess when you start talking about Farewell Uncle Tom, Mandinga, Mandingo… all those things play in there too.”

“But it’s not like that’s not something that’s part of the fabric of this country, and it happened,” he continues. “We’ll deal with as honestly, and as Tarantinoesque as we can.”

For more, hit the video: