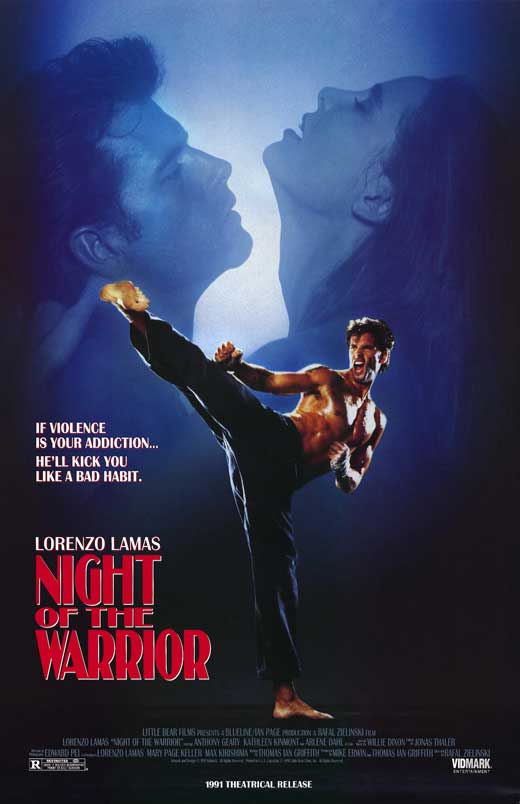 CLICK THE POSTER TO BUY THIS FILM FROM AMAZON

Hello friends, this is my first piece on Daily Grindhouse, so as a gentleman it’s my duty to introduce myself. My name is Vern, sometimes known as Outlaw Vern, but you guys seem cool so you can just call me Vern. I write about movies at outlawvern.com and some other places, and I wrote the books Seagalogy: A Study of the Ass-Kicking Films of Steven Seagal and Yippee Ki-Yay Moviegoer: Writings On Bruce Willis, Badass Cinema and Other Important Topics. I like all types of shit but the genres closest to my heart are the Badass Cinema, b-action and martial arts pictures. For this new column, Vern’s Punch-Quest (working title) I will be watching obscure action movies that I haven’t seen before and don’t know much about in hopes of finding an unknown gem. Just diving in like that is the only way you can really do it unless you have an unknown gem detector, which I personally can’t afford.

Just so we’re on the same page – and you’re probly down with this, ’cause you’re reading Daily Grindhouse, but I want to make sure – I don’t believe in looking down your nose at these movies. We laugh at their absurdities and filmatic flaws in the spirit of buddies busting each other’s chops. But like our buddies we respect them and know that they’re awesome. We don’t look at the vigilante revenge thriller, the Kumite sports drama or the low rent DIE HARD rip off as a lesser form of expression. We look at each one as an opportunity to overcome the odds and prove all the doubters wrong.

I look for badass excellence, I also look for weird quirks, interesting subtext, themes through bodies of work. And I got lucky with my first pick, NIGHT OF THE WARRIOR, a 1991 underground fighter movie starring Lorenzo Lamas. This is right before he grew his hair long and did the TV show Renegade. At this point he looked more like Treat Williams than Fabio. This one’s kinda gloomy, lacking the sublime ridiculousness of his SNAKE EATER trilogy, but making up for it with more competent filmmaking and an arts appreciation motif that’s unusual for a shirtless-kickboxing-in-a-warehouse movie. 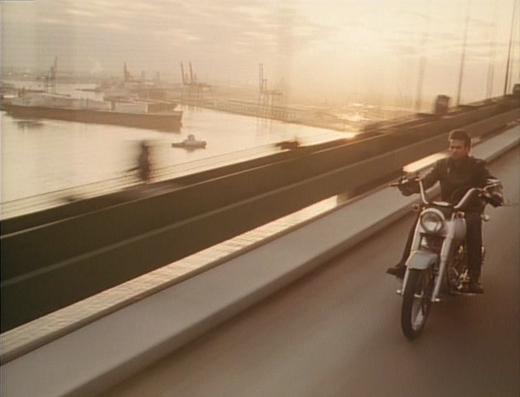 Lamas plays Miles Keane, a self-trained karate badass. The movie opens on the night of what he thinks will be his last fight, when he’ll have paid off his debt to his promoter, a goateed Lorne Michaels lookalike named Lynch (Anthony Geary from General Hospital and PENITENTIARY III) who loaned him money to buy a strip club. The opening credits show Miles riding through L.A. on a motorcycle, intercut with dancers from his club, until he drives right into the warehouse and parks a few feet from where he’s gonna have the fight. No dialogue until 8 minutes in, after he wins.

The trouble is his fight is so good it impressed Chang (Danny Kamekona of THE KARATE KID PART II and ROBOTJOX), a Korean gangster that Lynch owes money to, so Chang is gonna force Lynch to force Miles to have more fights. To do that Lynch and his right hand man Oliver (original DAWN OF THE DEAD badass Ken Foree) go after Miles’s old girlfriend (Felicity Waterman I believe?), his new girlfriend Katherine (Kathleen Kinmont, at the time Lamas’s wife), even his mom Edie (Arlene Dahl, his actual mother). They dig up traumatic memories from his past, they get an old friend to frame him for murder, in case that’s enough they also kidnap his girl. All types of shit trying to make him give in and keep doing fights.

That’s all pretty by-the-numbers, but listen to this: Mr. Underground Fighter/Strip Club Owner is also a fine art photographer who uses his “video prints” to try to express the plight of the homeless. It’s so important to him that he also interrupts a guided tour of an art museum to criticize another photographer for not making it clear that the people in his photos are homeless. (How Miles knows is anyone’s guess.) He also uses his photography sessions to get laid and his photo montages to threaten Lynch. 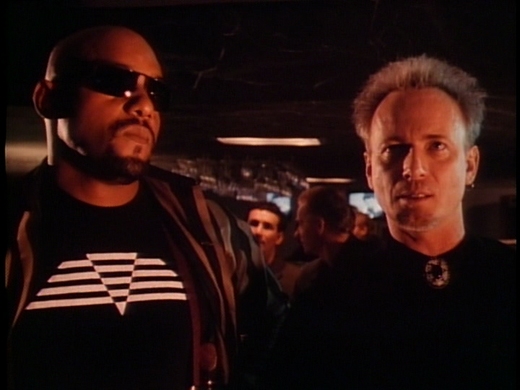 I have this idea I call the Theory of Badass Juxtaposition which states that a movie badass having a sensitive hobby or passion (Chow Yun Fat playing saxophone in HARD BOILED, Wesley Snipes building miniature models of Civil War battles in MURDER AT 1600, Jean-Claude Van Damme carrying around a bunny in THE SHEPHERD: BORDER PATROL) magnifies his or her more rugged, tough qualities. But Miles is a special case because his whole world seems to be filled with art lovers: the waitress he falls in love with turns out to also be an art history student and art gallery volunteer, Lynch misquotes Richard II and works out of a jazz club called St. Monk’s, Oliver plays crazy free jazz sax while two other thugs beat up Miles outside of his dark room, Miles has a homeless man (Charles Gevoian) staying outside his place who randomly sings opera, which also works as an alarm to warn him when the cops show up to get him.

The strip club itself is weirdly arty, with mostly-clothed dancers doing strange modern dance performances that incorporate kabuki, karate, inner tubes, a swing. I noticed a choreographer got to a credit at the front and I don’t think it’s for the fights. This place is clean enough that Miles is okay with his mom working there. She’s that archetype of the sad, past-her-prime former diva who seems to spend most of her time primping in a dressing room mirror (but not as pathetic as Shelley Winters in POOR PRETTY EDDIE). It’s an interesting place, but must be disappointing to most people who see the GIRLS GIRLS GIRLS neon lights flashing outside.

The music is good too, and there’s a fight that takes place in St. Monk’s while Blind Willie Dixon is on stage performing. He doesn’t miss a beat, unless you count Oliver abandoning his post as additional percussionist.

I love this arts motif because it speaks to the mindset of the filmatists. The sleazy underworld Miles operates in is like the underachieving world of DTV action at the time. These people see themselves as more than fighters, gangsters, waitresses or b-action filmmakers. They’re cultured. Of course, the movie’s idea of high art and culture is pretty obvious (Romeo and Juliet? come on, you can go more obscure than that) and the movie doesn’t transcend its roots as much as they might hope. But it’s pretty solid filmmaking and has a bunch of other interesting touches: 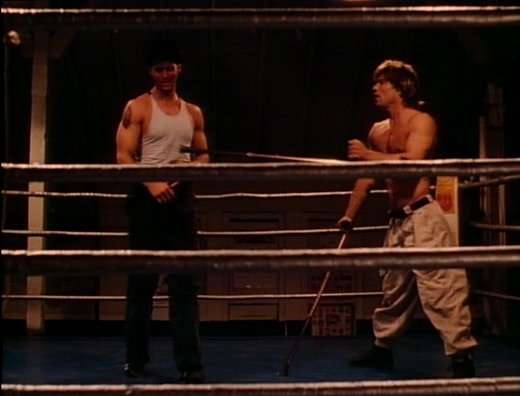 1. The most badass guy on crutches you’ll ever see. We find out about this friend Chance (Richard Redlin), who Miles hasn’t spoken to in years because he crippled him while sparring. When Miles awkwardly tries to apologize Chance brushes it off by saying “that’s old, man,” but it’s obvious that he’s not really over it when he engages Miles in an unsolicited wrestling match. Later he knocks a gun out of a guy’s hand with his crutch. I thought Redlin was a very convincing badass-on-crutches and it turns out that’s ’cause he really is a badass-on-crutches, having fallen 90 feet while painting a smokestack in his early 20s. That didn’t stop him from walking again and becoming an actor. He’s mostly done TV, only a few movies, and you have to give them credit for finding such a good role for him.

(here’s an interview with him http://www.hydeparkmedia.com/redlin.html )

2. Katherine has a chance to move into a nice new house with her rich boyfriend, but she says because she grew up on a farm she knows she always wants to live in the city. She’d rather stay living with her uncle (Bill Erwin, DESERT HEAT) than move out of town. I relate to her urban-preference and can’t remember another movie that deals with that issue. People in movies usually want to escape the city and have a big rich people house on a beach or something.

3. Geary is enjoyably obnoxious as Lynch, affecting an unconvincing “smarmy high class guy” type of accent and turning his nose up at everything and everybody. Plus sometimes he wears a medallion that looks like Dracula’s.

4. Foree gets a good moment where he sits in a convertible with Miles’s ex, sweet talks her and gives her crack to smoke, then gets out and sits on the hood wincing as other thugs strangle her at his back. He’s evil, but he feels kinda bad about it.

Director Rafal Zielinski is perhaps best known for SCREWBALLS I-II. The script is by the actor Thomas Ian Griffith, mainly known to me as Valek, lead bloodsucker in John Carpenter’s VAMPIRES, but he also wrote an early-Seagal-esque vehicle for himself called EXCESSIVE FORCE http://www.outlawvern.com/2011/05/05/excessive-force/ . This one he’s not in. I’m not sure if he wrote it for himself or if he knew all along that this was a role that needed the Lamas magic.

I know Lorenzo Lamas is supposed to be a big joke, but I think if you give his movies a chance he’s actually very charismatic. Moreso when he gets to be funny like in SNAKE EATER than when he’s taking himself real seriously, like in this one. 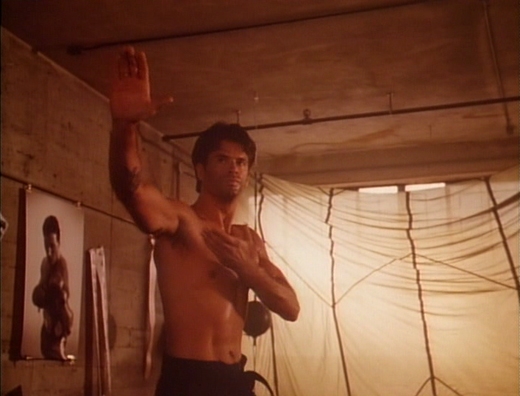 I can’t tell you you’re gonna like this. It has a 2.6 out of 10 on IMDb. It’s an underground fighting movie that only really has fights at the beginning and end. It doesn’t even have a training montage! (Unless you count the scene where this waitress he just met wakes up after a night of sex and sees him doing katas. That’s probly a good way to blow it with a new sex partner, but I think he’s geniunely not trying to impress her. He just needs his morning karate.) But I really appreciate a movie like this that has a healthy respect for formula and cliche but is creative enough to pepper that foundation with little eccentricities that make it stand out ever so slightly.

Funny thing about the title: the movie takes place over more than one night. I’m not sure which one is supposed to be the warrior’s.