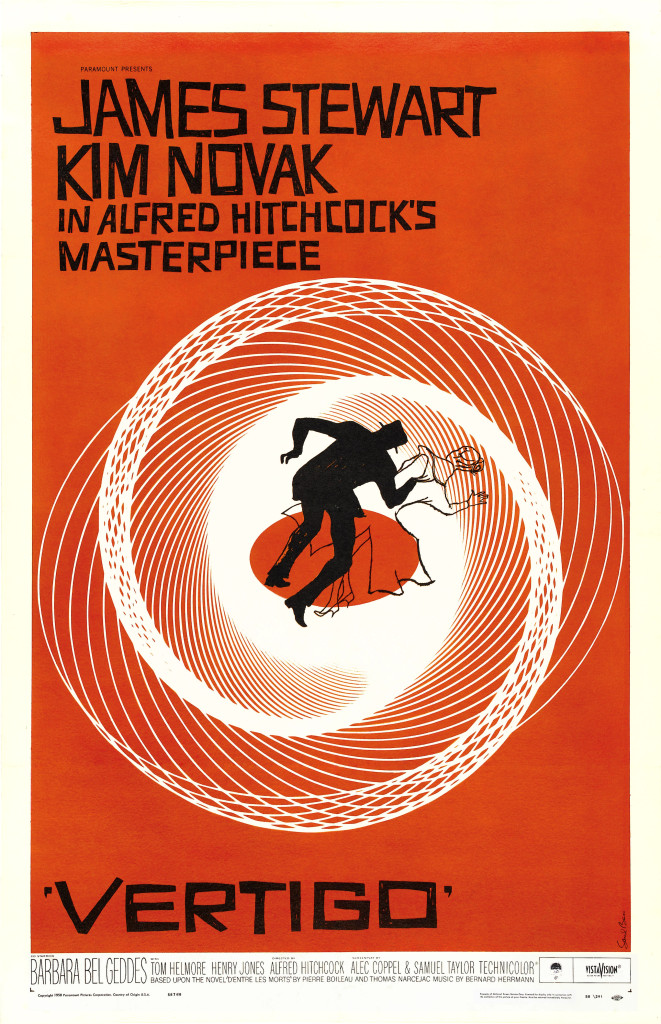 In the popular imagination, Jimmy Stewart is the all-American stand-up guy, the Capra-fied idealist of MR. SMITH GOES TO WASHINGTON, the redeemed phoenix of IT’S A WONDERFUL LIFE. Many modern-day filmgoers would probably surprised to watch the movies Stewart made with Anthony Mann (mostly Westerns, but ones more violent, angry, and morally ambiguous than most, i.e. THE NAKED SPUR) and Alfred Hitchcock (four in all). 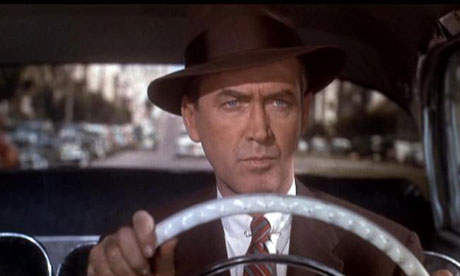 In ROPE, THE MAN WHO KNEW TOO MUCH, and REAR WINDOW, Stewart plays characters who are basically decent, but navigating murky worlds of murder and intrigue. But in VERTIGO, as in the Mann Westerns, Stewart’s persona was turned on its ear. This is not a redemptive story. Stewart plays a detective whose extreme fear of heights leads him to leave the force, at which point he picks up an informal case and becomes obsessed with the object of investigation, embodied by Kim Novak in what turns out to be a dual role. Or is it? 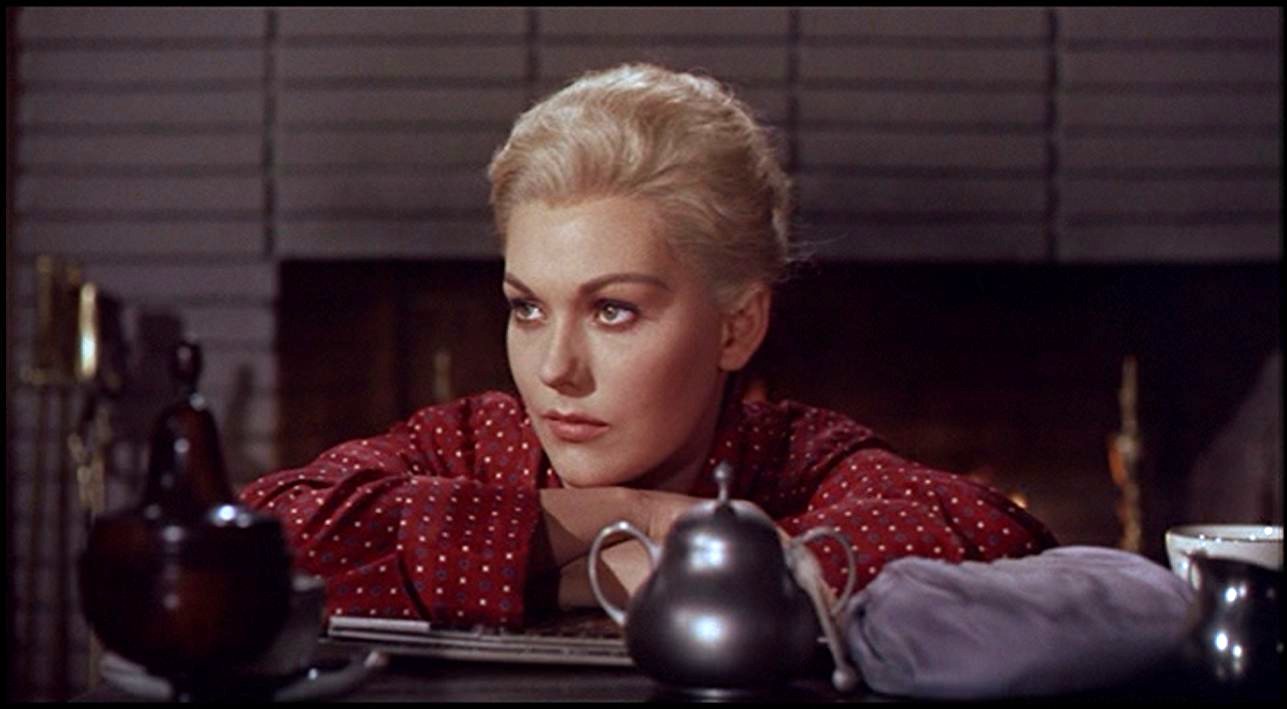 Hitchcock’s visualization of both the titular condition and the protagonist’s obsessive behavior borders on the surreal; this is arguably his most psychologically complex film, and many argue, his single best. Because Hitchcock very clearly had a thing for beautiful blondes, many critics interpret VERTIGO to be a personal film for Hitchcock — it certainly hearkens back to the recurring themes of voyeurism and identity that pervade his work. I’m not a renowned scholar and I could be very wrong, but I don’t see Hitchcock as a filmmaker who put too much of himself into his work. If VERTIGO touches on any personal obsessions, I feel like Hitchcock would have been detached enough to realize it and then use it for storytelling purposes. The through line of his artistic career was his remarkable ability to orchestrate audience reactions using the very visceral genre of suspense thrillers. It wouldn’t fit with his M.O. to turn that scrutiny back on himself. He was a showman above all, not much of a soul-searcher.

Regardless, VERTIGO is far more dense than many of Hitchcock’s best-known films; it isn’t a lark, like TO CATCH A THIEF or NORTH BY NORTHWEST. It is absolutely one of his most visually striking films. Working again with the cinematographer of REAR WINDOW, Robert Burks, VERTIGO uses its San Francisco locations, a stark color palette, and dizzying camera movements, to make the viewer feel as delirious as the Jimmy Stewart character. If you’re just starting to get into Hitchcock’s films,VERTIGO is not the place to start. You kind of need to build up to it to get the most out of it. But it’s so very much worth putting in the work.

VERTIGO is playing through Thursday at Film Forum in New York City. If you can’t make it there, [you can’t make it anywhere], but you can buy the new Blu-Ray edition of the film. Why not give us a hand and buy it by clicking on the following icon? 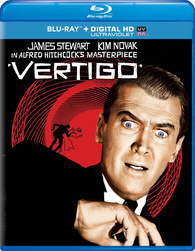 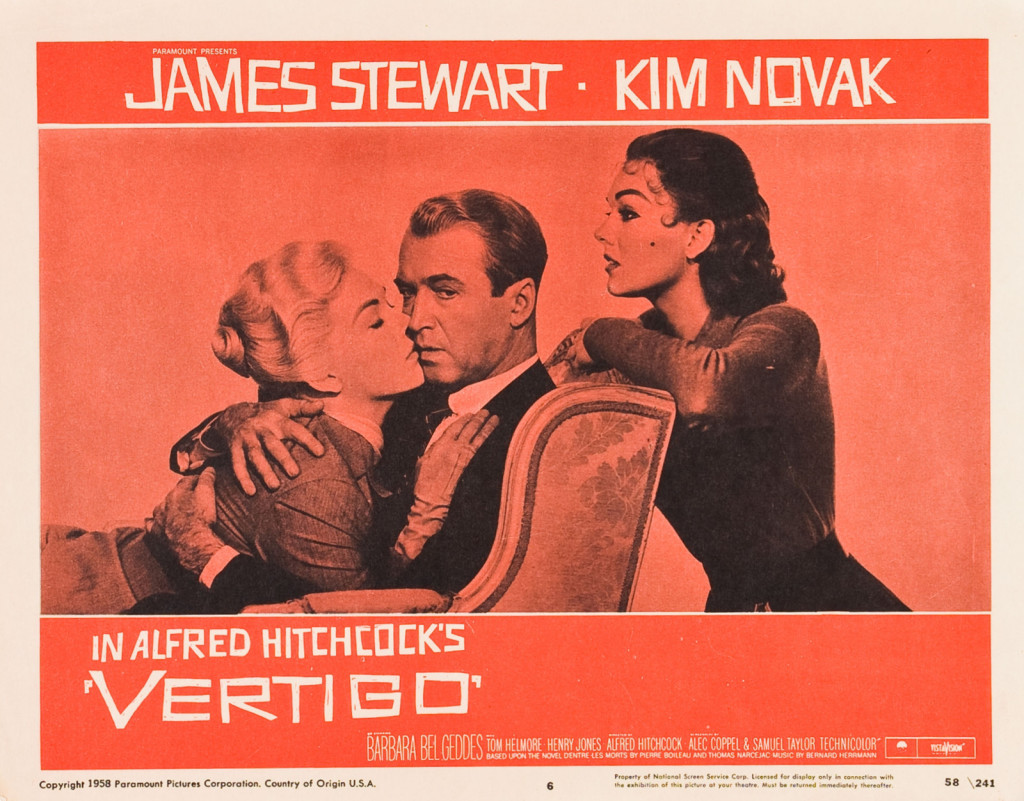