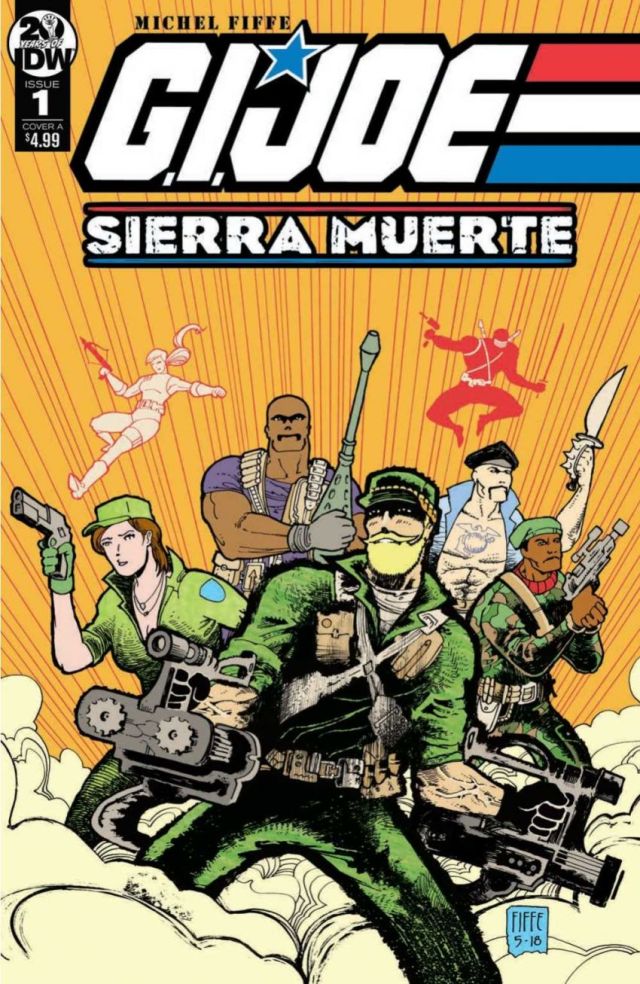 In point of fact, this is probably the sort of comic that I’m predisposed to dislike: It’s not just that I don’t give much of a shit about G.I. Joe and didn’t even when I was at the age where I was supposed to, it’s that exercises soaked in nostalgia don’t appeal to me as a general rule of thumb, and that there’s quite likely no one and nothing appearing on these pages that I’d have any sort of mental or emotional investment in. No offense to anyone who either dug this stuff when they were twelve or who may dig it even still today, but some books simply aren’t this critic’s cup of tea, and by all rights, this should be one of ’em.

But you know what? I said the exact same thing about Bloodstrike: Brutalists, and Michel Fiffe made me glad I stepped out of my own well-delineated “comfort zone” to give that a try. It would be foolish of me to bet against him doing the same here. 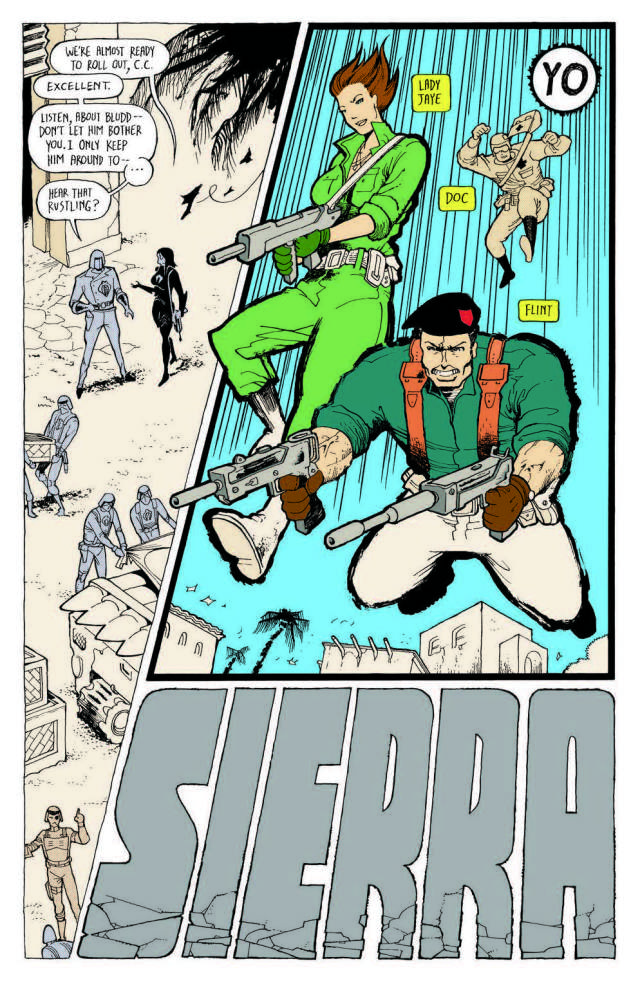 It seems a bit strange that IDW is “pushing the envelope” in more — and more interesting — directions with their Hasbro-licensed properties than either of “The Big Two” seem willing to with their venerable cash cows (or maybe it doesn’t?), but between Tom Scioli’s mind-blowing Go-Bots and the book we’re here to talk about, G.I. Joe: Sierra Muerte, that’s precisely the case, even though, at least on paper, Michel Fiffe doesn’t appear to be breaking the mold in any particularly significant way here. Could it be, then, with any pretenses toward “revisionism” off the table either by choice or editorial edict, that it all just comes down to execution?

One issue in it’s probably too soon to answer that for certain, but it’s probably not too soon to say that it at least appears to be the case — Fiffe’s page layouts aren’t so much “inventive” as they are a combination of “just different enough” and “well-considered”; his actions sequences are less “mind-blowing” and more “impressive”; his skilled figure drawing and muted color palette better described as “pitch-perfect” than genuinely “innovative.” And you know what? For this kind of project, all of that actually really works. 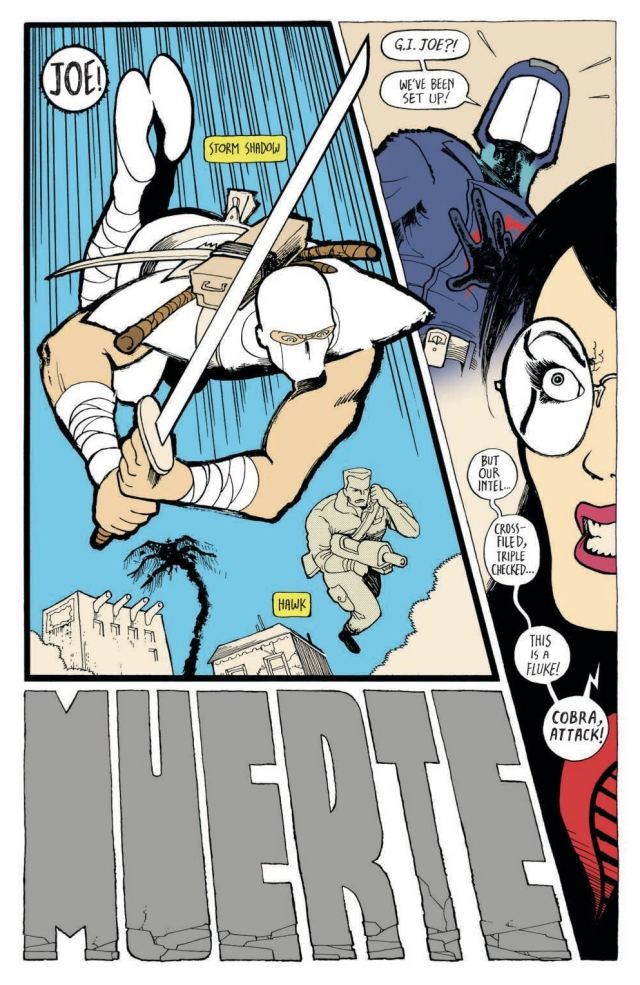 I don’t care about the history of this franchise and likely won’t check it out again after these three issues are over with, but that doesn’t mean I’d be enthused about seeing Fiffe re-invent the wheel here. He’s already done that with super-team books in a more general sense quite masterfully in the pages of Copra, so what intrigues me about this is the prospect of him importing some of the unique sensibility established there over into something tried-and-true, and to see what happens when those worlds either collide or meet halfway. Maybe both.

In that sense, then, sorry to drag out the most obvious cliche possible, but — “mission accomplished.” I don’t have to care about “The Joes” to be immediately drawn into this fairly simple set of fisticuffs against their Cobra adversaries (and for those who don’t know any more about the franchise than yours truly, maybe even less, comics scribe Chad Bowers provides a “back-matter” essay more than thorough enough to bring everyone up to speed) and to be taken in by its smart storytelling structure and cinematic pacing and presentation. Every character reads as the one-dimensional cipher that I’m sure they are (apart from head baddie Cobra Commander, who appears to be deathly ill), but they’re not here to express their individuality (which, in fairness to Fiffe, may end up coming into play later), they’re hear for their sheer utility, and as chess pieces on a board they serve their purpose just fine. It’s the shape, size, and scope of that board that is of far more interest. 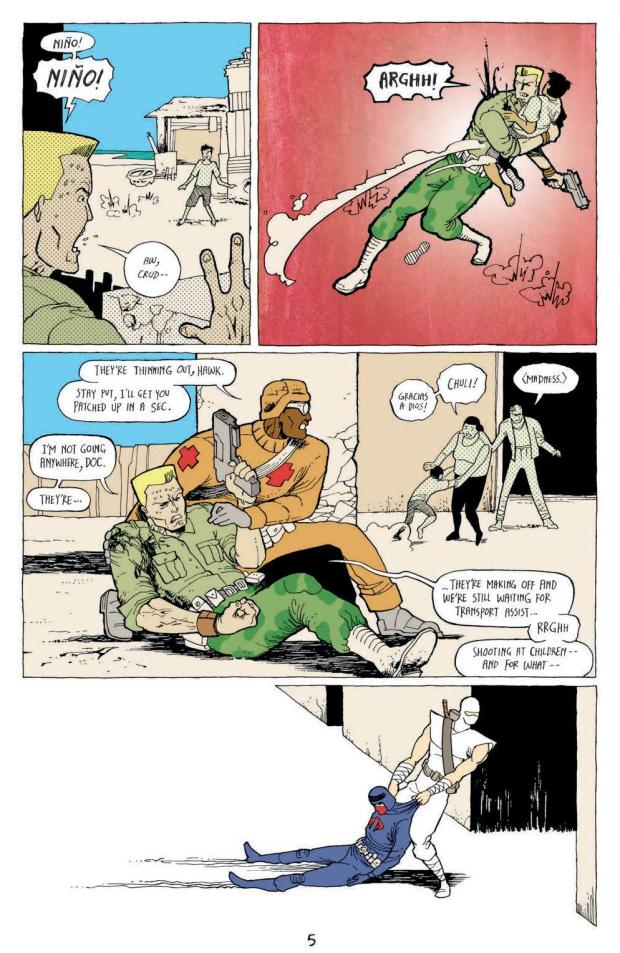 Not that you would or even should get a full idea of all that in a debut installment, even one for a series this short, but Fiffe drops enough hints about what he’s ultimately playing at here to whet your appetite for more, and he manages to do so in a way that doesn’t insult anyone’s intelligence, whether that someone is a lifelong “Joe Fan” (or whatever they’re called) or an art-comics snob. There’s a universality to what he’s doing here, a willingness to engage with different audiences on their own terms while relinquishing none of his own artistic control, that’s as admirable as it is refreshing, and the end result is something that’s both mercifully un-pretentious and yet in no way self-consciously “dumbed down” a la, say, too damn much of Ben Marra’s work. Fiffe loves this dusty old toy line — that much is evident — but he’s not about to compromise his own unique style to fit a pre-established mold. He tells what I assume to be a very traditional G.I. Joe yarn here, but he does it his way. What’s not to love about that?

If you want to see something radically different, look elsewhere, then, I suppose — but if you want to see the kind of story you can likely predict from start to finish written and drawn in a manner you likely never thought possible, then G.I. Joe: Sierra Muerte is proof positive that auteur sensibilities and lowest-common-denominator mainstream action-adventure storytelling can not only comfortably co-exist, they can actually bring out the best in each other.