Video Violence is a weekly column digging deep into the lesser-known genre films recently released to home video.  This week’s column takes a look at pinky violence precursor THE HORRORS OF MALFORMED MEN. 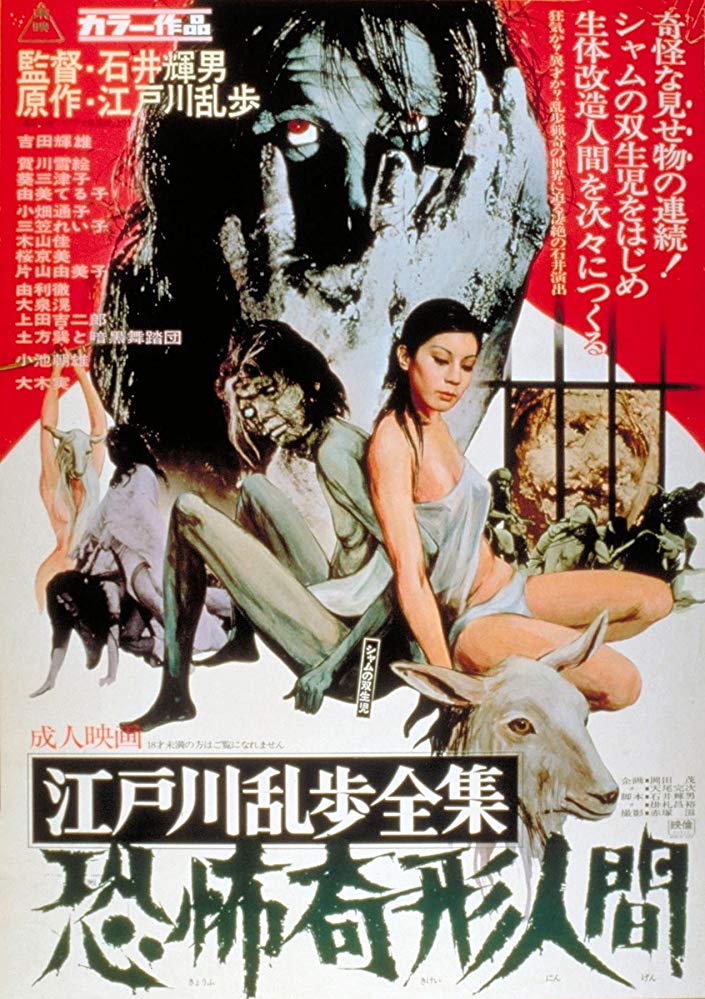 HORRORS OF MALFORMED MEN — now that’s a title. Just try ignoring that on a shelf as it conjures up warped visions of abnormal, misshapen nightmare people unleashed to raise hell upon an unsuspecting world. A cursory glance at the logline — perhaps the one that would have graced the back of its VHS box, had it ever been released on that format — further evokes such visions with its promises of a Dr. Moreau-inspired tale of madmen and botched experiments. And while Teruo Ishii’s dreamy mash-up of two Rampo Edogawa novels eventually delivers on that promise, its meandering route to arrive at that point makes for an incredible, mesmerizing trip. I have to imagine whoever said “the journey is more important than the destination” would have appreciated HORRORS OF MALFORMED MEN.

Our strange journey begins in an unlikely place, if only because I can’t imagine any reasonable person dreaming up an amnesiac (Teruo Yoshida) waking up in an asylum, surrounded by a sea of writhing, naked women. Haunted only by vague memories of his past (and the knowledge that he may be a doctor), Hirosuke escapes captivity and begins piecing together his scattered recollections. A haunting lullaby draws him to a nearby circus worker, who points him in the direction of the Japanese coast before her untimely murder. He’s actually framed for her death, which puts him on the lam; however, in a remarkable coincidence, he happens across an obituary for a man who looks like his twin. Naturally, he assumes this man’s identity, creating the impression that the dead man has risen from his grave, leading to what appears to be a comedy of errors…until it very much fucking isn’t.

Even though HORRORS OF MALFORMED MEN turns fifty years old this year, I’m hesitant to reveal more. Much of its appeal hinges on allowing its madness to unfold in the same way a particularly strange dream does: both languidly and vividly all at once, all while creating the sensation that it’s all very much unreal. You know none of this can possibly be happening, yet you want to continue, just to see where these bizarre visions carry you. Within minutes, it’s tempting to dismiss it as ludicrous nonsense, but the way Ishii embraces the inherent lunacy and just goes with it becomes admirable.  Most films have the courtesy to simply proceed from Point A to Point B; HORRORS OF MALFORMED MEN zig-zags through the entire alphabet, leaving its audience dazed and wondering just how it barreled through a women’s prison movie, a bizarre mistaken identity comedy, and a mad scientist plot within the span of an hour.

Each stretch is indelible in its own unique way. That opening scene in the asylum is confounding and delirious, almost as if someone’s dropped you right into the middle of a novel without providing any context. Something vaguely sinister guides this hazy, unreal opening: like Hirosuke, we’re essentially in a fugue state, stumbling from one scene to the next, desperately clinging to any shred of direction. Once that arrives in the form of the conveniently-deceased doppelganger, the film dovetails into the stuff of screwball comedies, as Yoshida puts on a graveyard slapstick routine as a (barely) reanimated corpse, much to the horror and confusion of the dead man’s relatives. Actually assuming the identity must have been an afterthought for our beleaguered protagonist because he quickly learns the complicated intricacies of the man’s life, from his left-handedness to the affair he was carrying on with a mistress. Sometimes, HORRORS OF MALFORMED MEN feels like it’s a half-step away from becoming a farcical sitcom that finds our intrepid impostor weaseling his way out of another jam.

Of course, that means it’s even more weird that all of this nonsense is prelude to the titular horrors once we arrive on the distant island that’s haunted Hirosuke since he inexplicably awoke among a throng of insane women. Finally, the film reveals its malformed men in the form of a demented batch of experiments lorded over by the enigmatic Jogoro (Tatsumi Hijikata), whose Christlike appearance foreshadows his twisted messiah complex.  Part mad scientist, part megalomaniacal Bond villain, Jogoro is eager to spill all of the sordid details that Hirosuke (and the audience) crave — even if it means resorting to extended monologues and leaden flashback sequences to reveal the breadth and width of his depravity. None of it feels like it should work: this stretch feels overly talky and leans heavily on an expository backstory that spirals out of control.

But it’s exactly that lack of control that’s so indelible: you spend the last stretch of HORRORS OF MALFORMED MEN marveling at the vivid, unhinged imagination that hurtles you down this rabbit hole. Just when you think the script has revealed its most outlandish bit (such as the titular mutants performing a fully choreographed dance routine), something even more insane lurks around the corner in the form of separated Siamese twins, bug-eyed perverts, and an incredibly sick turn of events. It goes without saying that this prolonged climax features all the stuff that immediately come to mind upon hearing the film’s title: a bizarre surgery sequence, snakes, mutants, and leftover test tubes, all of it rendered via evocative gel lighting, ominous freeze frames, and cool negative exposure photography.

Between the array of stunning visuals and the tonal whiplash, HORRORS OF MALFORMED MEN is puzzling, humorous, disgusting, and haunting — sometimes all at once. Nothing quite captures its manic, schizophrenic approach quite like a climactic suicide via fireworks display, a weirdly rousing, incendiary, and bold ending to what is ultimately a tragic story. Imagine if ROMEO AND JULIET had ended with its pair of star-crossed lovers blowing themselves to hell in front of their families — sure, it’d still be sad, but it’d also be kind of killer, right?

Suffice it to say, HORRORS OF MALFORMED MEN is something else. Contextualizing it as a crossroads dispatch from the Toei company perhaps helps to sort it out a bit — but only so much, to be sure. Released in 1969, HORRORS OF MALFORMED MEN is a reflection of the genre cocktail the studio had indulged during the previous decade, but it also hints at the studio’s foray into pinky violence style exploitation during the weird, lurid ’70s. In some ways, it feels like a bold herald for that particular era: at times, this might look like the stuff of vintage genre movies, but something more twisted and outlandish lurks within this unassuming façade. Put it this way: it’s not often you find a movie that reminds you of WEEKEND AT BERNIE’S, FREAKS, and OLDBOY, and this particular moment in time — not to mention this particular creative energy — may have been the only time such madness could have been hatched. 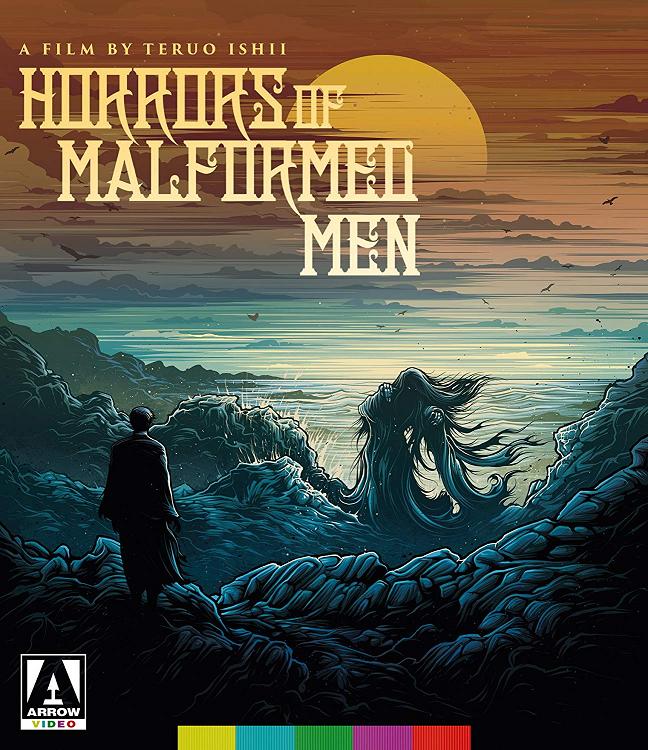 After an unremarkable theatrical run in 1969, HORRORS OF MALFORMED MEN effectively vanished. Thanks to a Japanese policy that eventually prohibited such depictions of the disabled, the film was effectively lost during the home video era until Synapse’s DVD release in 2007. Now, over a decade later, Arrow’s providing the Blu-ray upgrade, with all of the previous material ported over alongside some newly-produced supplements in addition to the usual top-notch presentation.

An audio commentary from scholar Mark Schilling and a pair of retrospectives make the jump and provide crucial historical context about MALFORMED MEN and its various creative forces. “Malformed Memories” is the first of the pair and features Shinya Tsukamoto (TETSUO: THE IRON MAN) and Minoru Kawasaki (THE MONSTER X STRIKES BACK) discuss their experience with Teruo Ishii’s films and their influence. The director himself also pops up intermittently to discuss his work and this film in particular; he’s also the subject of “Ishii in Italia,” which captures his appearance during a film festival Q&A back in 2003.

New material includes “Malformed Movies,” an interview with screenwriter Masahiro Kakefuda, a Toei staple who wrote several screenplays for the studio in addition to MALFORMED MEN (including one of my personal favorites, SCHOOL OF THE HOLY BEAST). This fourteen-minute interview has him recounting his career arc, which saw him work alongside several notable directors of this genre scene for decades. Arrow has also produced a new audio commentary with Japanese cinema expert Tom Mes to provide further context and information about the film.  First pressings also include liner notes from Mes, Jasper Sharp, and Grady Hendrix, making this a thoroughly comprehensive release and yet another feather in the cap for Arrow, who continue to solidify their reputation as the Criterion equivalent for genre films.

And for HORRORS OF MALFORMED MEN, this release represents another lease on life: while Synapse’s terrific DVD release did rescue it from obscurity, it’s also been out of print for several years, leaving the film out of reach for some enthusiasts. With this new edition, Ishii’s weird, haunting, and altogether alluring film finds a deserved limelight once again: let’s hope it keeps it there and helps to canonize it as one of the definitive Japanese horror dispatches.