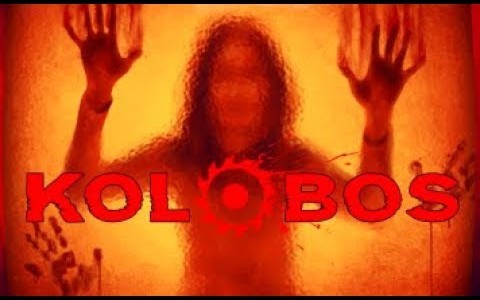 Video Violence is a weekly column digging deep into the lesser-known genre films recently released to home video. This week’s column takes a look at the underseen turn-of-the-century slasher KOLOBOS.

KOLOBOS arrived either too late or too early when it quietly snuck onto video store shelves in 1999.  Essentially an ’80s throwback in ’90s digs, Daniel Liatowitsch and David Todd Ocvirk’s slasher homage also anticipated the rash of grisly, psychologically-driven horror that would soon become popular early in the new century. With the exception of its obvious 90s aesthetics and some slight metafictional posturing, KOLOBOS isn’t exactly in the same class as the slick, self-aware, and often smartass bunch of SCREAM knock-offs that defined this brief era. At a time when many fans bemoaned such an approach to their beloved slashers, it feels like Liatowitsch and Ocvrik actually did something about it by crafting this genuinely nasty tribute to the genre’s golden age.

An evocative opening theme takes us directly back to the heyday of Goblin, as William Kidd’s score channels the stuff of vintage ’70s and ’80s Eurohorror, setting the stage for KOLOBO’s stylish blend of violence and otherworldly atmospherics.  A puzzling first scene fractures the narrative, with POV shots capturing an unseen character’s desperate attempt to survive some mysterious ordeal.  Some good Samaritans scrape the victim off the street and take him or her to a local hospital, where the local staff is bewildered by the scars covering the body before them.  Their patient also only utters one word: “Kolobos,” a confounding phrase that does little to make sense of it all.

When the patient’s roommate begins rambling aloud about a classified ad seeking five adventurous people to participate in an experimental movie shot, it triggers a series of flashbacks to a few days earlier, when a quintet of strangers arrived at a snowbound house to film a reality-based film.  Among the subjects are Kyra (Amy Weber), an artist with a history of mental health issues; Tina (Promise LaMarco), a loquacious, outgoing fast-food employee hoping for a big break; Erica (Nichole Pelerine), a slasher scream queen looking for more serious (read: “respectable”) work; Tom (Donny Terranova), a struggling stand-up comedian; and Gary (John Fairlie), a film student who’s naturally curious about the experiment.  To both their surprise and horror, this “experiment” turns deadly when someone locks down the house and activates a series of deathtraps, causing the subjects to grow suspicious of each other as they attempt to survive.

At first glance, it’s easy to see KOLOBOS as very much a product of its time.  Its hook obviously marries the era’s slasher resurgence with its burgeoning reality TV movement: “Imagine watching someone mercilessly slaughtering a cast from The Real World” is essentially the pitch, which probably appealed to a lot of folks at the time.  The script plays to expectations in that respect, serving up mostly obnoxious caricatures who stir up drama before the house starts spitting buzz saws at them.  One of them wears Jncos and unironically refers to things as “the bomb.” At one point, Erica subjects her housemates to THE SLAUGHTERHOUSE FACTOR, the six-part slasher saga that’s made her a “star,” just to see most of them bash it. This scene especially feels maybe a half-step removed from the similar moment in SCREAM where Randy recounts the “rules” of slasher movies, only it’s a touch more mean-spirited since THE SLAUGHTERHOUSE FACTOR is no HALLOWEEN.

It’s easy to assume KOLOBOS is pitched from a similar place of poking fun at the genre’s conventions or at least satirizing them, but its heart isn’t really into it. Rather, it becomes a twisted mutation of vintage slashers and gialli fused with the gritty, violent psycho-thrillers that would soon crowd theaters in the coming years.  It was especially ahead of its time in its puzzle box approach, as numerous movies would conspire to run this particular kind of story into the ground, so much so that you could start to set your watch by the late-movie twists that revealed the protagonist was actually harboring a split personality responsible for all the mayhem.  Some of these (FRAILTY, IDENTITY) proved to be more memorable than others (HIDE AND SEEK, SECRET WINDOW), and KOLOBOS mostly feigns at it anyway by barely concealing this turn of events. Between her cagey demeanor and bizarre artwork, Kyra is immediately suspect, but the script at least takes an artful approach by constructing a faceless alter-ego (Ilia Volok) that haunts the house during some of the film’s most indelible shots.

The other part of the equation here — the part about a group of strangers trying to survive deathtraps — invites an obvious comparison to the likes of SAW and its sequels. It’s a fair comparison, even if KOLOBOS isn’t preoccupied with the intricate twists, turns, and clever bloodletting that would become that franchise’s hallmark. The omnipresent cameras and reality TV angle also beg for some sort of social critique or moralizing you might find in SAW, but KOLOBO’s heart isn’t quite in that, either; sadly, the film rarely indulges this aspect from a thematic or aesthetic perspective (the filmmakers practically stumble right into the “found footage” look but do precious little with it).

No, what KOLOBOS really wants to do is simply recapture the simple pleasures of the slasher genre.  By no means is there anything wrong with this: On the contrary, I think we all have to admit to the enjoying the perverse thrills that drive these movies. Liatowitsch and Ocvirk understand that “whodunnit” isn’t as important as how they do it, so they litter KOLOBOS with gut-ripping buzz saws, acid baths, smashed faces, saran-wrap suffocations, slit throats, and more. It’s a veritable bloodbath, and the duo isn’t afraid to dwell on the violence with lingering close-ups of the carnage in an effort to pay homage to the dazzling, over-the-top mayhem of the splatter heyday.

As the film unfolds, the in-movie criticism of THE SLAUGHTERHOUSE FACTOR feels less like condescension and more like a mission statement: KOLOBOS is looking to reclaim the slasher genre from the z-grade reputation it garnered as low-rent cash-ins piled up, each a little bit cheaper and sillier than the last.  This one, on the other hand, isn’t here to fuck around: it’s stark, unflinching, and downright nasty in its attempt to cut right to the basic, primal urges of the genre. Like its in-movie spoof, KOLOBOS largely exists as a gore showcase; unlike those spoofs, it’s done with a level of artistry as Liatowitsch and Ocvirk import Eurohorror aesthetic staples (read: alluring gel lighting and a moody, atmospheric score) to remind jaded audiences of this genre’s potential.

In this respect, KOLOBOS may have been even more ahead of its time. The past decade especially has seen a rise in nostalgic tribute films looking to explicitly recapture vintage aesthetics, with some going so far as to exist precisely for that purpose. While this one doesn’t quite go that far, it certainly bears the hallmarks that have become commonplace in these films, such as an appearance from a genre icon (Linnea Quigley) and an homage to an infamous slasher moment (a deer antler impalement — maybe these guys just really had a thing for SILENT NIGHT DEADLY NIGHT?). KOLOBOS has a bit of a lighter touch than most films with this approach: I wouldn’t say it feels like some “lost” ’70s or ’80s slasher (again, the presence of Jncos precludes this much), yet it’s difficult to deny what it’s up to with its nostalgic flourishes.

Twenty years later, KOLOBOS has aged pretty well. In 1999, slashers were on their way out of fashion again, having been pushed aside by a new wave of horror that would be ushered in with THE BLAIR WITCH PROJECT. An entire generation of ’90s video-store brats like myself had yet to truly appreciate and  form a nostalgic fondness for the films being paid tribute here, which certainly isn’t a problem now; if anything, this brand of homage has become all too commonplace, so it’s a good thing Liatowitsch and Ocvirk bolstered the nostalgia with solid filmmaking chops to ensure that KOLOBOS endures more than a mere curiosity.

Not everything about it completely works: the performances are a little too mannered and wooden at times, and it’s disappointing to see it disengage with the implications of the reality TV stuff, which becomes more window dressing than anything resembling aesthetic or thematic heft. Ultimately, however, KOLOBOS has doggedly survived as a true cult object with an unlikely arc — it may have began life as an apparent also-ran straggling behind the slasher renaissance, but it now feels more like an improbable herald of the genre’s future. 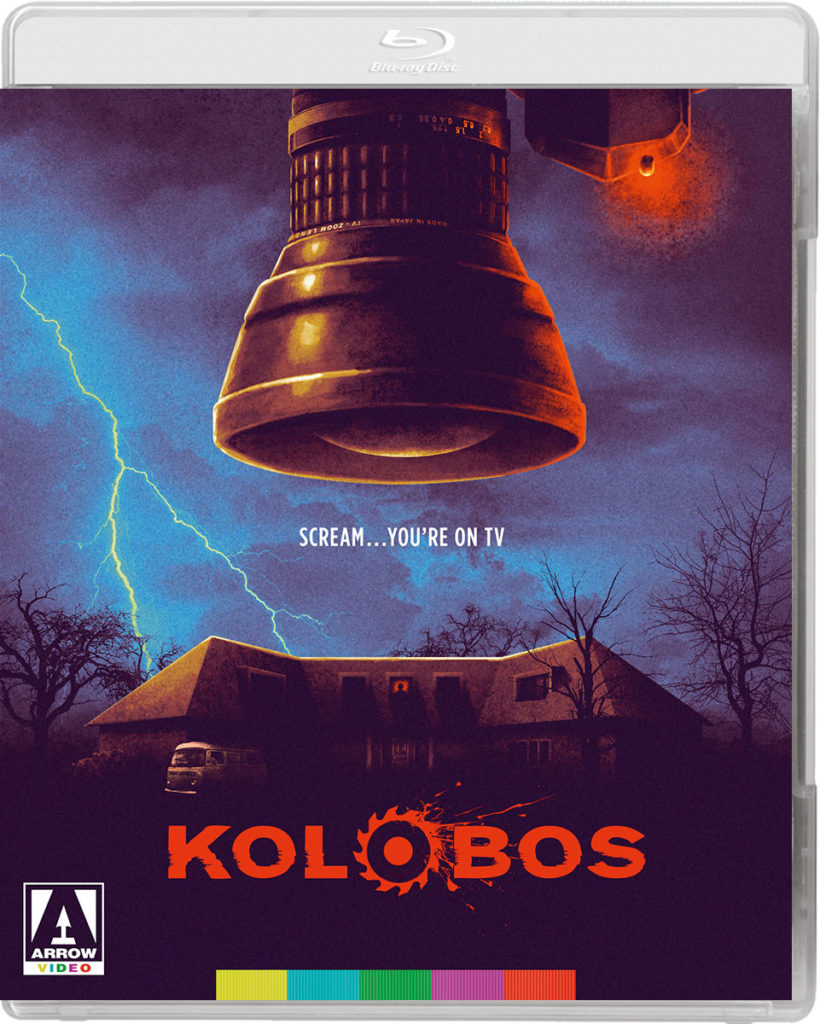 KOLOBOS is the sort of film just begging for rediscovery, making it a perfect candidate for Arrow Video’s stellar home video library. The label doesn’t disappoint with a Blu-ray upgrade that sports a typically sterling presentation thanks to a newly-commissioned 2K scan of the original negative supervised by the filmmakers, accompanied here by two audio choices: a 5.1 DTS-MA HD remix and a PCM stereo track.

Plenty of extras help to illuminate the production and release of the film, with “Real World Massacre: The Making of KOLOBOS” proving to be the most substantial of the video supplements. What begins as a retrospective with the typical anecdotes and recollections about hatching the film ends as something of a post-mortem, as Liatowitsch, Ocvirk, and producer Nne Ebong discuss how KOLOBOS fell victim to shifting tides, pointing their finger specifically at THE BLAIR WITCH PROJECT. There’s no real bitterness, though, and they’ve taken it all in stride; in fact, they’re quick to note how the film was popular at video stores. More than that, they’re obviously quite proud of the final product and have no bones about copping to their influences: those obscure Italian horror movies that “never got their due,” as one participant puts it.  1999 was a different time, folks.

Other supplements include separate interviews with Kidd and Volok, a behind-the-scenes stills gallery, the film’s original trailer, a 15th anniversary trailer, footage from a recent UK screening, liner notes from Phillip Escott, reversible cover art, and “Superhelden,” a 10-minute super-8 film that Liatowitsch directed at the age of 10. Liatowitsch also features alongside Ocvirk for an audio commentary, rounding out yet another impressive array of extras from Arrow. Most importantly, it’s in the service of a film that never quite got its due itself, thus completing the circle of cult life: What was once conceived as a tribute to underseen films has become an obscurity itself just waiting to be properly appreciated.