Before its credits even begin to unfold, THE LAST VICTIM opens with a title card informing us that statistics show that violence against women is on the rise, creating the impression that this exploitation  will be more than…well, just an exploitation movie. It’s a surprising launching point for a film that’s actually a remake of FORCED ENTRY, a straight-up pornographic scum show released only two years earlier. Perhaps this take, mounted by Jim Sotos (SWEET SIXTEEN, HOT MOVES), will prove to be a more sensitive, artful rendering of a psychopath stalking and brutally murdering random women. For a while, THE LAST VICTIM actually follows suit with moody shots of New York City bathed in streetlights and neon marquees; a radio broadcast documenting grisly news stories accompanies, completing this vision of a ’70s urban hellscape. All that’s missing is Travis Bickle’s insistence that “a real rain will come and wash all this scum off the streets” to convince you that this will actually be about something.

In place of that, Sotos offers more grisliness in the form of authorities discovering a woman’s corpse, leading to the contradiction guiding THE LAST VICTIM. While it seems like Sotos wants to draw attention to the plight of victimized women, he also has no compunction about exploiting them. As the film unfolds, it becomes increasingly clear that the latter impulse wins out, especially once it settles into a repetitive groove of voyeurism and violence.

Unfolding in the shadow of New York City in an adjacent Jersey suburb, it’s not even about any of the constantly brutalized women.  Instead, we follow the exploits of Carl (Ron Max), an unassuming mechanic with a nasty psychotic streak that rears its ugly head whenever he’s in the presence of a woman. He’s currently fixated on Nancy Ulman (Tanya Roberts), a suburban housewife with a couple of kids and a doting husband. In short, she represents everything Carl doesn’t have, and he’ll be damned if he’ll sit idly by and not just take this idyllic life knocking off the husband and just sliding right into his place.

But as he hatches this plot, he passes the time creeping on — and, in some cases, murdering — random women that cross his path. A customer at his garage becomes makeshift peephole fodder. A hitchhiker (Nancy Allen!) takes an ill-fated final ride when she chides Carl for making small talk. An uncomfortably young girl seeking help for her bicycle falls prey to his predatory act and soon becomes yet another victim. All the while, Carl lurks under the radar without raising a hint of suspicion. His co-worker reads about Carl’s grisly pastime in the papers,  blissfully unaware that this lug could even commit such atrocities.

And who can blame him? Carl proves to be a remarkably charming sociopath, equally capable of dumping a girl’s body by the riverside and helping his elderly neighbor. When he’s not perving on his customers, he’s providing them with friendly, helpful service. He actually worms his way into Nancy’s life when she happens to need her car fixed, giving him an opportunity to put on a convincing act for her. Max’s performance is the weirdly fascinating anchor of THE LAST VICTIM, as he couches Carl’s lunatic outbursts in a disarming, boyish facade. Essentially the prototypical psycho-next-door persona, it’s nonetheless a chilling precursor to the likes of TAXI DRIVER and MANIAC, and Max deftly sketches the portrait of a man dominated by his own sick impulses. You sense that Carl doesn’t necessarily want to do commit these horrible deeds; rather, they well up within him and must be given an outlet.

Few will be surprised to discover that THE LAST VICTIM has much more in common with MANIAC, though. Occasional glimmers of a conscience aside, Sotos’s film mostly thrives on Carl’s violence against women. To his credit, he doesn’t lay on the sleaze and gore as much as Lustig does in MANIAC, opting instead to keep much of the violence implied with showy angles, artful slow motion, and sound design freak-outs that blend disembodied shrieks, grunts, and screams into a swirl of disorienting madness. THE LAST VICTIM is a solid example of a film that just feels unsettling without resorting to on-screen gratuitous violence (indeed, it was  inexplicably rated PG upon release).

It’s also a bit of a one-trick pony in this respect, as the script lulls into a holding pattern that finds Carl alternating between stalking Nancy and assaulting random victims. Just when this starts to wear thin, the script pivots to its obvious, protracted climax for the remaining twenty minutes, wherein Carl invades Nancy’s home, only to find that she’s plucky and resilient. True to the film’s title, she proves to be Carl’s final conquest, as she turns the tables on her attacker with a frenzied outburst of her own. It’d be an interesting, table-turning dynamic if the script have Roberts more to do beyond act as the inevitable victim and avenger. Despite the title and Roberts’s top billing, Nancy is a passive non-entity, largely existing as an inert foil for this scumbag when she’s not putting in an order at the butcher shop.  A scene where she inexplicably robes and disrobes multiple times as she takes a shower reveals just about everything you need to know about where THE LAST VICTIM’s head is most of the time.

Those fleeting flickers of introspection would convince you otherwise, though. During the aforementioned scene where Carl’s co-worker reads the paper, he seems to be more outraged by a Yankees loss than the headline about a butchered girl, revealing society’s callous indifference to violence against women. Carl himself functions as a walking, talking critique of “nice guy” entitlement: it’s not just that he wants his fantasy life — he feels it’s somehow owed to him because he’s a man. Any movie that greets such nonsense with a butcher knife to the face (and it must be noted that Carl’s comeuppance is by far the goriest scene in the film) feels like it must be trying to say something.

Whatever that might be becomes garbled by the film’s exploitation impulses, though.  Much like its protagonist, THE LAST VICTIM simply can’t help itself: it’s compelled to indulge grindhouse nonsense, such as Carl’s rants about TV and his bizarre decision to chow down on a chunk of cheese during his home invasion. The film’s final shot is a black-hearted grace note that almost dares you to laugh after witnessing all this stomach-churning carnage, further complicating just how audiences are meant to react. Like any good — or at least memorable — exploitation offering, it actually doesn’t seem to be too concerned about coaxing a specific reaction.  What’s more important is that they simply react, whether it be with disgust, guffaws, or some perverse combination of both. 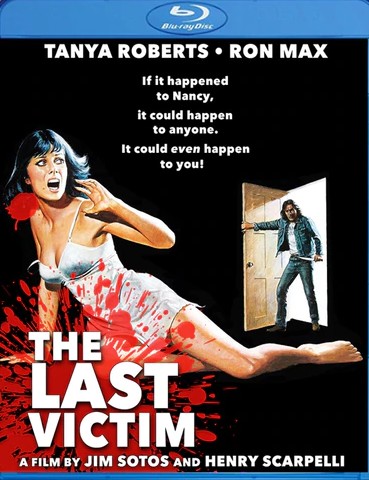 Explaining THE LAST VICTIM’s trek to Blu-ray almost requires a road map, one that stretches all the way to the ’80s, when an enterprising producer re-released it to capitalize on Roberts and Allen’s fame. Retitled FORCED ENTRY (making it even easier to confuse with its pornographic predecessor), it also sported extended scenes of gratuitous nudity and violence, plus a newly-recorded, awkward voiceover narration that provides further insight into Carl’s motivations (surprise — it’s mommy issues!). For decades, this more or less persisted as the “official” cut of the film released on home video, even though Sotos apparently never much cared for it. As such, the original LAST VICTIM had gone largely unseen since its release 40 years ago until Dark Force Entertainment’s recent Blu-ray release, which restores this cut alongside the alternate FORCED ENTRY version.

And, this being Dark Force Entertainment, it didn’t arrive without some measure of controversy. Despite early announcements boasting the “complete” cut of the film, the final product is compromised — from a certain point of view at least. Where the FORCED ENTRY cut has always clocked in at 88 minutes, it’s cut down to 72 here, leaving completists unhappy (and rightfully so). One could argue — as Dark Force head honcho Bill Olsen has — that the FORCED ENTRY cut wasn’t approved by the director anyway, and it amounts to a curious special feature on this disc. However, one could also easily retort that it even it deserves to be preserved since the film persisted in this form for over thirty years.

Instead, the long lost LAST VICTIM cut is the main event here, assembled from the original negative and video tape inserts. According to Olsen, this was essentially a lost film before Sotos cobbled together these elements as best he could; given what scarce information we have, it’s quite possible that this isn’t even the exact cut of the film that played in theaters during its original run but rather a “director’s cut” spliced from hazy memories and existing elements. The result is a Frankenstein transfer that alternates between spectacularly vivid HD and murky low-grade inserts. While the former definitely outweighs the latter in both cuts, it’s worth noting that this is definitely a rickety affair that won’t serve as a reference disc anytime soon.

None of this would have been an issue had Dark Force been up front about it, however; anyone who has dealt with sister company Code Red for over a decade realizes that every disc won’t be reference quality, but Olsen has historically been a bit more transparent about such releases. In this case, customers only grew aware of the issue when THE LAST VICTIM arrived in mailboxes, long after the first batch sold out and Dark Force already had our money. It’s a disappointing turn of events, especially since the label has been largely unrepentant about it and has even threatened to remove the release from circulation if complaints persist. Buyers should very much beware that they aren’t getting what was originally advertised with this release and will need to resort to alternative channels for the complete LAST VICTIM/ FORCED ENTRY experience.