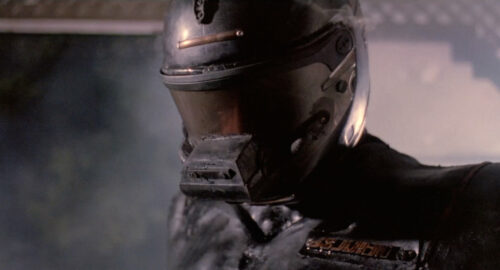 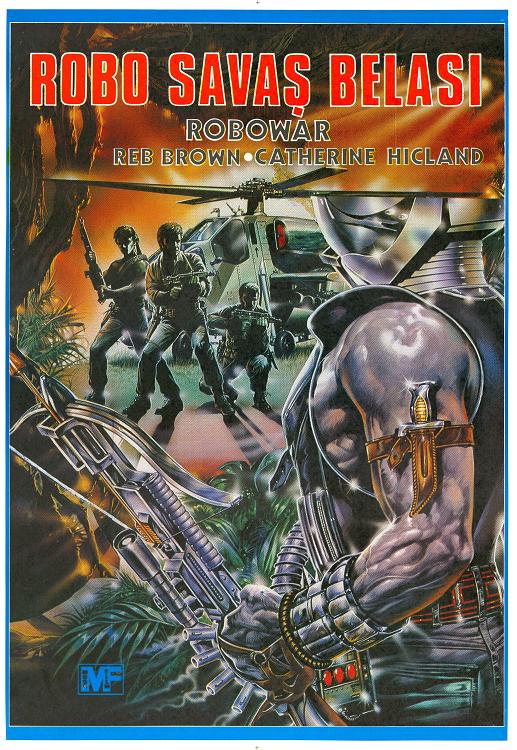 Bruno Mattei made an art out of the shameless rip-off. Harnessing the same creative energy as a kid smashing together different toys in a sandbox, he and frequent co-conspirator Claudio Fragasso often took popular trends (or, in some more egregious cases, popular properties) and did, well, whatever the hell they wanted with them. Concerns about copyright law were secondary to the duo’s dogged quest to make a quick, cheap buck by any means necessary. Success throughout the 1980s only emboldened Mattei and Fragrasso, who, with assists from like-minded distributors, practically flaunted their bootleg operation with films like SHOCKING DARK (a.k.a. TERMINATOR II), NIGHT KILLER  (a.k.a. TEXAS CHAINSAW MASSACRE 3), a pair of ZOMBIE knock-offs, and CRUEL JAWS (a.k.a. JAWS 5).

It goes without saying that none of these films deserve these titles, at least from a conventional legal standpoint; your personal mileage will quite vary in determining if they do so from an existential standpoint. Personally, all of these films at least merit consideration, if only because it seems like they shouldn’t exist. They inspire the same sort of intrigue as fan fiction, only it’s sort of awe-inspiring because it’s unfolding as a movie with an actual budget — not a large budget, mind you, but just enough of one to convince you of their legitimacy. There’s some real uncanny valley shit going on with these movies, which are often idiosyncratic and completely derivative all at once. Most of them coast on this bizarre sensation and essentially distill their exploitative wares down to a schlocky essence: They’re essentially the on-screen “good parts” of their more famous counterparts (the shootouts, the explosions, the gut-munching creatures, etc.) without the actual behind-the-scenes good parts (talent, money, common sense, etc.).

It’s a hell of a trick when they pulled it off, but they also occasionally dropped a clunker like ROBOWAR. On paper, the appeal of this one is obvious: who wouldn’t want to watch Bruno Mattei carelessly mash-up PREDATOR and ROBOCOP? In practice, it’d be hard to fault anyone who feels like checking out halfway through, before the second half of that equation really even comes into play. That’s what you get when you try to make PREDATOR with Reb Brown instead of Arnold Schwarzenegger.

ROBOWAR leans on your familiarity with John McTiernan’s seminal action staple. Something goes amiss in a jungle in a vaguely foreign location, requiring “the government” to tap a diverse team of special forces commandos to clean up the mess. In this case, they call themselves “BAM,” short for “Big Ass Motherfuckers.” Brown is Major Murphy Black, the ostensible leader of a group that vaguely resembles the cocksure warriors from PREDATOR, plus a tagalong scientist (Mel Davidson) that’s basically playing the role of Burke from ALIENS — just in case this thing wasn’t feeling derivative enough, you know? At any rate, something inhuman lurks in the jungle, waiting to stalk and slash these intruders, who have no clue what they’re up against as they uncover its victims’ flayed corpses and haphazardly spray bullets at the unseen menace.

Most of Mattei’s rip-offs coast on that uncanny effect, at least long enough to truly hook you: you can’t really quite believe you’re seeing something so brazenly plagiarized, so you can’t help but watch to see how far it might go. By the time you’re captivated and the effect starts to wear off, the films tend to shift gears and start ripping off something else to escort you to the finish line. The problem with ROBOWAR is that this effect wears off rather quickly, mostly because the nonsense usually associated with Mattei’s films lack their typical charms. It’s also exceptionally talky during the early-going, which is something you don’t normally mind because the outrageous dialogue and otherworldly dub jobs usually make even the most leaden exposition kind of fun. Here, though, you’re saddled with banal action movie soundbites that leave you wishing Mattei would just get to the good stuff.

Once that happens, it’s still largely uninspired, especially whenever the commandos are mowing down the insurgent guerilla forces that are terrorizing the locals. This big sequence mostly amounts to our heroes firing guns off-screen while their victims leap and flail about in response. It’s remarkably bloodless and without any awesome squib work that would make this entire digression worthwhile. Rarely are you ever left thinking a Bruno Mattei movie needs more gore, yet ROBOWAR somehow pulls off that ignominious feat. Outside of a few gnarly, skinned-alive corpses and an off-screen evisceration, there’s not nearly enough bloodshed to compensate for the ramshackle production value and the fact that, again, someone thought it was wise to redo PREDATOR with Reb Brown.

There’s an inherent humor in the very notion, of course, and I suppose ROBOWAR is good for a few laughs, some intended and some very much not. You have to imagine everyone thought naming the group “Big Ass Motherfuckers” would get a laugh, and it does. Brown pinning a guy to a wall with a knife and telling him “don’t move” with a smirk earns more eye rolls than laughs because, once again, you’re reminded that he’s “replacing” Arnold Schwarzenegger. I suppose you can’t help but chuckle at the tin-can Robocop/Ultraman knockoff that subs in for the Predator here, especially when its true identity is revealed and the filmmakers give him a knock-off Schwarzenegger voice to re-enact the ending of PREDATOR, resulting in this weird ouroboros of plagiarism.

But the film’s best scene is one of the unintended laughs. It comes when the screenplay riffs on Jesse Ventura’s death in PREDATOR, which leaves his fellow commandos reeling and shaken by the realization that they’re truly in the shit. In this version, the big, loudmouthed badass is blown away, his limbs left scattered in an unrecognizable pile of viscera. Unrecognizable, that is, except to one of his fellow soldiers, who surveys the pile of pulp before flatly deadpanning “that’s his hand” to confirm the deceased’s identity. These are the moments you live for in a Bruno Mattei joint, and I wish ROBOWAR had more of them. Without more of these idiosyncrasies, it’s unable to transcend the sinking feeling in the audience’s gut that they’re simply watching a lackluster mash-up of PREDATOR and ROBOCOP. 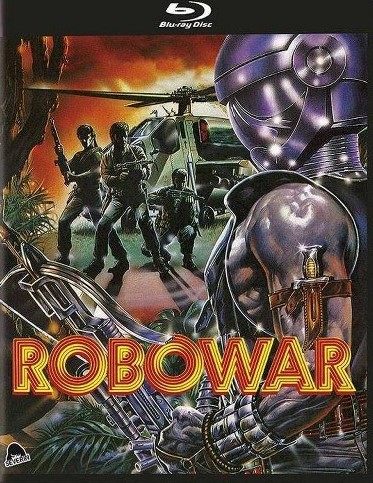 However slightly disappointing ROBOWAR might be compared to other films of its ilk, it’s still a cause for celebration whenever something like this somehow manages to be officially released. Severin Films has practically cornered this niche Mattei market, and it continues to impress with its Blu-ray release for ROBOWAR. Not only has the film been immaculately restored with a new 4K scan of the original negative, but the disc is bursting with nearly two hours of supplemental material. Fragasso appears in “Robo Predator,” an on-screen interview wherein he discusses his career, including his various collaborations with Mattei. He recounts their ramshackle, devil-may-care approach to filmmaking, noting how they’d sometimes have multiple productions running at the same time (ROBOWAR was shot concurrently with ZOMBIE 4). Rosella Drudi — who often worked alongside Mattei and Fragasso in an uncredited capacity — appears in two interviews. “Italian Rip-Off” mostly focuses on ROBOWAR, while “Murder She Wrote” is a more comprehensive retrospective that allows one of horror’s unsung scribes discuss the difficulties of working as woman in the film industry.

Catherine Hickland is the subject of “Robo-Lady,” which finds her making some scattered recollections about the film’s production. Co-star John Dulaney appears in “Papa’s War” and discusses the circumstances that led him to ROBOWAR before spilling some on-set anecdotes. Jim Gaines dishes about some of the more contentious aspects on-set (apparently, Dulaney was abrasive at times) and touches on making ZOMBIE 4 a bit as well. Actor/stuntman Massimo Vanni discusses how he found his way to the Phillipines with Mattei and Fragasso, where he had to overcome his claustrophobia to play ROBOWAR’s title character. Finally, Hickland’s behind-the-scenes home movie footage gives viewers a glimpse at some on-set downtime, as the actress mingles with her co-stars. A trailer for ROBOWAR also appears, plus Severin has tossed in a CD featuring the film’s score for good measure.

By all accounts, something like ROBOWAR should barely exist, much less boast such an incredible — and incredibly official — release like this. You can retire your old videos or your dubiously-sourced bootleg DVDs with the utmost confidence. And, if you’re anything like me, you’re left hoping Severin isn’t done raiding the Mattei/Fragasso vaults for future releases. (Read: unleash CRUEL JAWS already.) 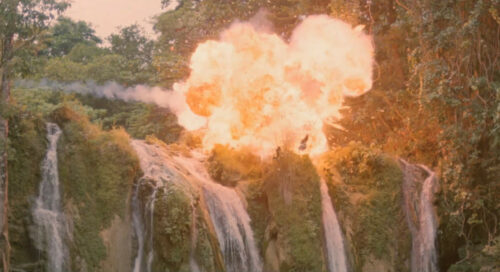