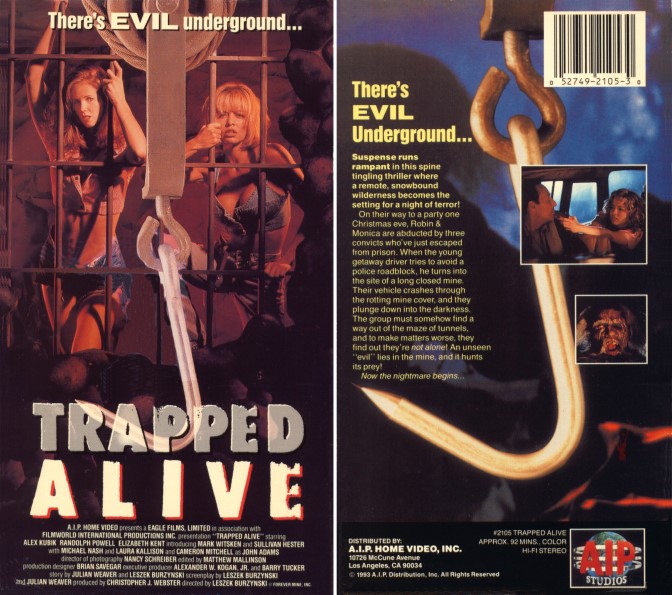 By 1988, the remnants of the decade’s slasher boom were beginning to circle the drain. Some of this era’s more noteworthy efforts stubbornly clung to dear life and refused to simply be flushed away; others, however, slipped quietly into obscurity without leaving an impression.

Leszek Burzynski’s TRAPPED ALIVE was always destined to be one of the latter efforts: shot in 1988 but not released on video until 1993 (right about the time when folks were really shoveling dirt over the genre’s grave), it never stood a chance, especially since it remained trapped on VHS for the next 25 years.  I’d like to say this thing is a hidden gem just waiting for a new generation to rediscover it, but there’s a reason it’s just now arriving on DVD and Blu-ray after all of these years.

You wouldn’t know it from just hearing about it, though, because TRAPPED ALIVEhas one of those plots that sounds downright improvised. A couple of friends, Robin and Monica (Sullivan Hester & Laura Kallison in their lone screen appearances), are headed to a Christmas party until a trio of escaped prisoners carjacks them. The abduction goes south when Randy (Mark Witsken), who we later learn was in prison for being a wheelman, crashes the car. I can’t imagine how he got caught in the first place.  At any rate, the three thugs take the girls to a nearby abandoned mine, where something lurks down below, waiting to violently defend its turf.

Obviously, we’re not dealing with the usual stalk-and-slash routine that largely defined ’80s horror.  While the setting here suggests something like MY BLOODY VALENTINE, TRAPPED ALIVE actually begins life as a LAST HOUSE ON THE LEFT riff before dovetailing into RAW MEAT territory. Let’s be real: there are certainly less inspired approaches, especially since Burzynski briefly honors the scummy, disreputable legacy of those titles. Alex Kubik is appropriately menacing as “Face” Napoleon, the child-murdering ringleader who quickly weasels himself into a corner of the mine where he can be alone with the two girls.The gore is downright nasty: one of the prisoners takes a header right through the car windshield, causing him to bleed out with shards of glass jammed in his face. When one of his accomplices circles back to his body later, it’s even worse: Most of the flesh has been peeled away, as if some wild animal had it for an impromptu snack.

The actual culprit — a wild-eyed, shaggy-haired, nigh-emaciated cannibal monster — eventually emerges to stalk the remaining survivors of the crash. All of this unfolds in an impressively creepy, decrepit mine in the desolate wilderness of snowbound Wisconsin, giving TRAPPED ALIVE a distinct, sleepy, somber, dead-of-winter atmosphere.

On paper, it’s hard to see how this one went wrong.Watching it, however, reveals that it’s maybe a little bit too sleepy and somber. You want to respect Burzynski’s attempt to craft something suspenseful, grim, and nasty instead of slapping together another cut-rate splatter movie. Less commendable is the execution: this is one of those films that mistakes the slow burn approach as an excuse to meander about until its killer decides to quite literally drop in with a pair of hooks and drag off another victim.  It’s actually quite an impressive mechanism: Picture a claw machine, only instead of a kid innocently trying to score a toy, it’s a deranged mountain man cannibal plucking away live humans for consumption.

Again — what in the actual hell is going on with TRAPPED ALIVE? Something like that sounds absolutely bonkers, and it is. It’s just a shame that Burzynski asks you to sit through about fifty minutes of wooden performances, dull dialogue, and shots of low-budget horror patron saint Cameron Mitchell sleeping and monologuing through this dark, dreary night. Seriously, this must have been an incredibly cushy gig for him: As one of the kidnapped girls’ father, he doesn’t actually participate in the main thrust of the story at all. Instead, he hosts his own Christmas party before settling in for the night and fretting over the fate of his daughter. He longingly looks at a picture of her (and his dead wife, apparently) and has a nice, deeply-felt, weepy scene. Too bad it all mostly exists as padding and as an excuse to fit Mitchell’s name on the marquee as a selling point for investors.

You wonder what this has to do with, well, anything, until you learn her house was an old waystation and still has a functioning phone line to the mine down below. It’s the script’s very clumsy way of getting the officer to the mine, where you think he’s going to be the conquering hero. Instead, he spends most of his time bickering with Randy, who turns out to be the convict with a heart of gold because one of the girls finds him attractive, so much so that she immediately starts daydreaming out loud about being a couple with him. I don’t know, maybe solve the whole cannibal-in-the-room problem first. Priorities don’t seem to be a strength here. Neither is accurately firing a gun, as Randy’s attempt to shoot the cannibal instead of one of the girls goes horribly awry, further convincing you that he might be the most inept criminal ever.

All the while, you’re left to (quite fairly) wonder where the damn cannibal is, anyway. His presence is more of an afterthought rather than the main plot; in fact, I’m fairly sure you could lose him altogether and still keep the gist of TRAPPED ALIVE. It’s almost impressive that the mutant cannibal madman somehow becomes a footnote to all the other insanity unfolding around him. Even more impressive — or disheartening, really — is that even that stuff only arrives in short bursts, and almost all of it is concentrated in Kent’s weirdo housewife, who returns for the gobsmacking climax.

Burzynski is hellbent to smother TRAPPED ALIVE with an overly self-serious approach, though, resulting in an sluggish snooze that’s neither genuinely unsettling or wildly unhinged. Flashes of potential show that either path could have been possible: a sinister rendition of “God Rest Ye Merry Gentlemen,” low-lit shots of the barren snowscape, and the remarkably-constructed mine set create a chilling, wintry ambiance. TRAPPED ALIVE captures the languid haze of those long, impenetrably dark winter nights, where even the faint glow of Christmas lights is like dying embers feebly trying to keep light in a dark room.

Burzynski all but squanders it,though; what’s more, he doesn’t seem to recognize what an absolute hoot this thing could be if he’d just embrace this bizarre cross-breed C.H.U.D. and MY BLOODY VALENTINE as unrepentant schlock. Because he doesn’t, TRAPPED ALIVE remains a curious slasher era postscript and leaves BLOOD BEAT’s reputation as the WTF?! Wisconsin Christmas slasher very much intact. 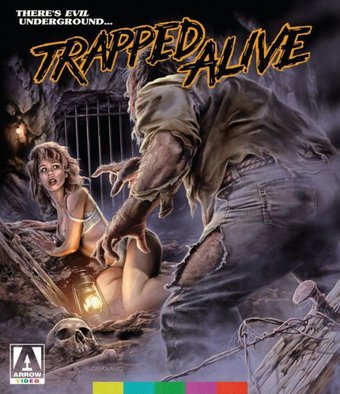 Arrow Video has exhumed TRAPPED ALIVE for its long-overdue (and I’m sure long-awaited by somebody) Blu-ray debut with a typically sterling 2K restoration and an abundance of supplements.  Three separate commentaries (one with Burzynski & moderator Joe Rubin; another with effects artist Hank Carlson & moderator Josh Hadley; and yet another with the folks from Hysteria Lives) provide more information than you’d ever expect to be possible for such an obscure slasher movie. And if that’s not enough, prepare to dig into nearly two hours of vintage and newly-produced material in the form of interviews and making-of documentaries.

Burzynski appears in “The Early Years,” an interview that explores his career leading up to TRAPPED ALIVE, which saw him working on his own short films, directing TV episodes, and writing the indelible BLOOD HARVEST. A separate interview with Carlson allows him to similarly stroll down memory lane, recounting how his inspiration as a Monster Kid and his subsequent tutelage under Howard Berger led him to the profession, where he worked on an abundance of projects before and after TRAPPED ALIVE. The centerpiece of the new supplements is “There’s Evil Underground,” a thirty-minute retrospective featuring Burzynski, Carlson, Hester, Kubic, cinematographer Nancy Schreiber, and production manager Alexandra Reed. It’s a solid tour through the film’s conception and its somewhat tumultuous production (both the weather conditions and Michael Berryman — who was originally cast in Kubik’s role — proved difficult) and is littered with various anecdotes about the shoot.

Perhaps the most interesting supplement is “Upper Michigan Tonight,” a 22-minute TV documentary produced during filming. Its larger purpose was to highlight Lake Windsor Studios, the production outfit responsible for hatching TRAPPED ALIVE. Founded by producer Christopher Webber, Lake Windsor looked to turn the region into its own little bizarre corner of Hollywood. Both Webber and Burzynski appear in the footage to discuss their motivation and excitement about shooting in the region, and production designer Brian Savegar appears to discuss his contributions, shining a well-deserved spotlight on his crew’s impressive mine set.

An image gallery with nearly 200 photos, reversible artwork, and extensive liner notes from B-movie expert Zack Carlson round out another impressive release from Arrow Video. Where others might see TRAPPED ALIVE as a movie that should only make it to this format by the skin of its teeth, Arrow sees it as an opportunity to make up for lost time by lavishing it with a treatment usually reserved for genre favorites. Suffice it to say, this one has come a long way from being unceremoniously dumped into video stores in the ’90s.