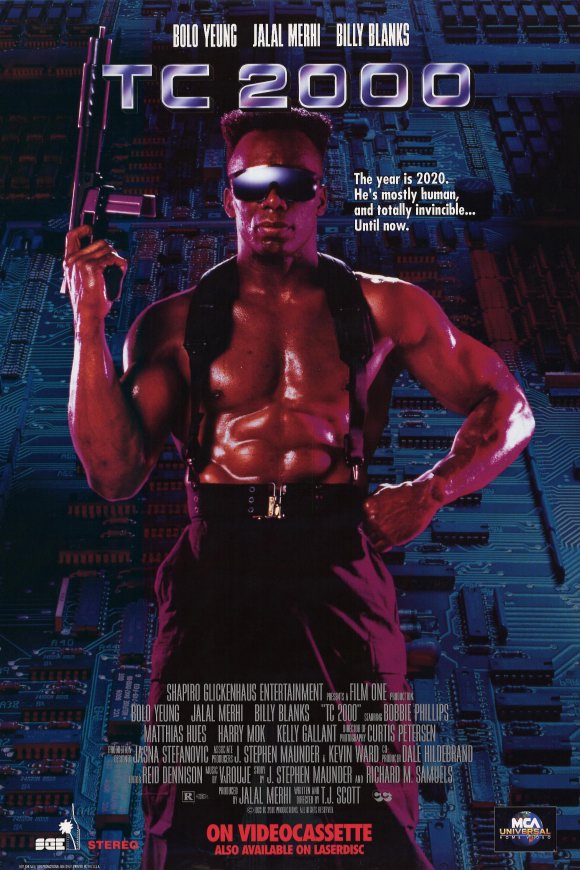 Here’s a sci-fi fisticuffer with a cast that’s a who’s-who of guys who haven’t been a henchman in an EXPENDABLES yet: Bolo Yeung, Billy Blanks, Jalal Merhi, Matthias Hues. Bolo gets top billing in a rare good guy role, but Blanks is alone on the cover because he’s Jason Storm, the actual main character and stiff narrator. He introduces us to a polluted dystopia where rich people moved underground to be safe from disease and hunger. “Killers and criminals formed ruthless gangs. When they weren’t fighting each other they were trying to break into the underworld to steal our food and water. That’s where I come in.”

He and his rookie partner Zoe Kinsella (Bobbie Phillips – BACK IN ACTION, SHOWGIRLS) are Tracker/Communicators – “an elite division of the underworld security forces.” They ride motorcycles and wear welding helmets and are called to various tunnels full of pipes where they run up a wall and jump off and kick invading longhairs and headband wearers from the surface – i.e. the 99%.

Yeung plays Master Sumai, who used to work for the underground rich people but he got disillusioned. Now he lives on the surface where he protects single moms from giant rapists, gets challenged to public fights and practices a special form of energy transference punching. That’s probly my favorite aspect of the movie. It’s introduced during a fight where his cowardly opponent – after being released from a checkmate balls-about-to-be-punched position – grabs a guy from the crowd to use as a human shield. Sumai punches the shield but the impact skips him and gets the other guy. Later we see Sumai practicing the technique by exploding watermelons (a training and demonstration method later used by Seagal in SHADOW MAN). 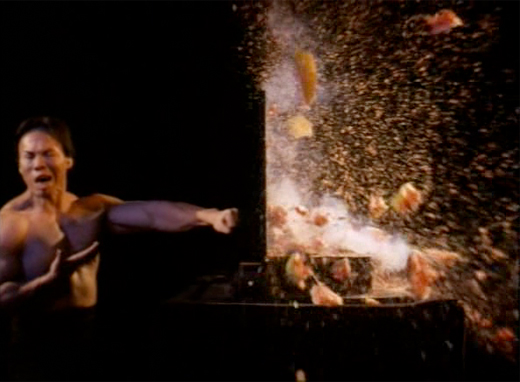 The underground territory is under attack by The Picassos, a gang of surface-dweller creeps named after their leader Niki Picasso (Merhi, wearing a beret and face paint). The Picassos live in a mansion with candleabras and an Elvis-themed jukebox, they wear a combination of leather, metal studs and furs, and get to have tough guy names, for example Harry Mok is called Blade because he likes to spin a big knife in his hand even when he’s just sitting around bored. You’d think they would be happy with this post-apocalyptic version of a Cribs lifestyle, but they have aspirations. They’ve gotten ahold of a handheld device called a PDR that they plan to use to break into the underworld and get to some doomsday device because of some conspiracy or whatever. You know, evil stuff.

Don’t worry, it’s not a movie where the sheltered rich are the good guys and the oppressed poor are maniacs. As you’d figure, the TCs’ bosses, called “Control,” are up to some shit, and Zoe’s deceased father, founder of the underworld, left behind a secret that could save the world and what not. When Zoe gets killed and her body is used for a ROBOCOP/UNIVERSAL SOLDIER type reanimated cyborg called TC 2000 X, Storm leaves the force over a dispute about ownership of her memory chip implants. Also they try to frame him. So he flees to the surface, meets Master Sumai, uncovers the conspiracy and comes back with a small army to start a revolution or save the world or whatever.

B-movies alot of times don’t get credit when they’re clever or knowing, but I didn’t detect any of that in TC 2000. There are some laughs but they don’t seem intentional to me. There’s a weird part where Storm is cooking and asks Zoe to “try some of my muscle pasta,” and I haven’t figured out what exactly that is. And there’s a couple enjoyably stupid one-liners, like when Picasso tells Stone, “Looks like… it’s time to die” and he responds “Time to get a new watch.” (As if he believes Picasso really looked at his watch and it said “TIME TO DIE” on it. Or as if there is a specific time when he’s supposed to die but the watch is broken and it’s not actually that time yet.)

There’s a question I always wonder about Billy Blanks. I feel like an asshole bringing it up, but I’m gonna do it. Please don’t take it as an insult of Blanks, but I always wonder about his hairline. Since his movie heyday was in the early ’90s he usually rocked some variation on a high top fade, but it looked weird because his hair was much more receded than the young people who popularized that look. Was he deluding himself that people wouldn’t notice, thinking if he kept up with the current fashions he would seem younger? Or was he saying “I don’t give a fuck. I got a John McClane hairline and a Big Daddy Kane hairstyle. And I can do it ’cause I’m Billy Fuckin Blanks.” I prefer to think the second one, of course.

I know TC 2000 isn’t a real obscure one, it’s pretty well known for something that’s still not on DVD. Or at least the box is pretty well known to me. I could’ve sworn it had a quote on the cover not from Roger Ebert or somebody but from Kickboxing Illustrated. But maybe that was some other movie. The cover, with its metallic lettering and shades-wearing Blanks makes it look like a lower budget kickboxing version of THE TERMINATOR. The tagline “The year is 2002. He’s mostly human, and totally invincible… Until now,” is technically accurate I guess, but obviously leads you to believe that he is the TC 2000 and not the guy who has to, well, avoid fighting the TC 2000 X because it used to be his partner.

Writer/director T.J. Scott is a former stuntman and stunt coordinator (he did POLICE ACADEMY 3-4, for example) who has gone on to direct alot of TV ranging from Robocop and Xena to Spartacus and Orphan Black. 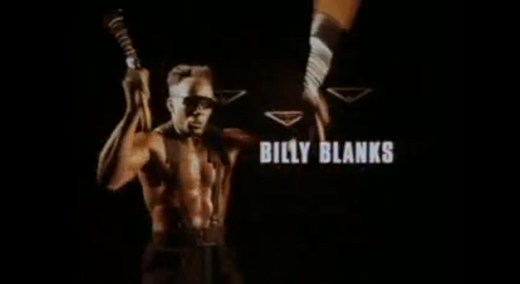 Sadly the coolest part of the movie is the end credits, where Yeung, Merhi, Blanks and Hues pose in front of a black background with various bladed weapons (or two pairs of nunchakas in the case of Blanks). Then a logo comes up that says “TIGER CLAW’S TC 2000 ALLIANCE” (™).” At the end it morphs into “A WORLD OF MARTIAL ARTS SUPPLIES! TIGER CLAW’S TC 2000 SPARRING GEAR” with a 1-800 number for a free catalog. I doubt you could still get the catalog, but the TC 2000 line of products continues to this day. I have a headband.