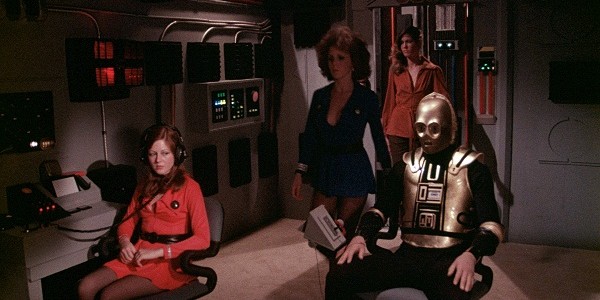 Anyone who has been following reviews of Vinegar Syndrome’s Peekarama line of adult double features (mine and some other writers’) has probably noticed that director Carlos Tobalina is both the best-represented filmmaker in the line and arguably the least interesting. Of the 22 current titles in the Peekarama line, eight of them are made up of films directed by Tobalina. The latest is a double feature of the two ‘Casanova” films he made with John Holmes, and it is very much in line with the rest of his work. Fortunately, Vinegar Syndrome also recently released another Peekarama double feature of two features by Scott McHaley, which serves as a nice counterpoint to the “Casanova” films.

John Holmes stars in (and is credited as director of) THE NEW EROTIC ADVENTURES OF CASANOVA (1977) as the legendary lover. An opening sequence (which borrows footage from START THE REVOLUTION WITHOUT ME, including a very clear shot of Donald Sutherland) introduces Casanova as he is about to engage in a duel for the affections of a lady. The duel takes place in what looks like a public park in what is clearly not 18th century France, and the hilarious anachronisms continue throughout the opening act of the film. Around the 30-minute mark, the story abruptly jumps to San Francisco in the 1970s, where John (also John Holmes) is visiting a therapist to discuss his feelings about a recent weekend trip to visit his friend Paul (Peter Johns) and Paul’s family. John recently came into possession of a magic perfume owned by his ancestor Casanova, and whoever smells it is driven wild with lust. Naturally, this means during his weekend visit John had sex with Paul’s wife, mistress, and three daughters while everyone else in the house also trysted in nearly every possible combination of heterosexual couples. As is typical of a Tobalina film, two of the daughters also had sex with each other, and the third seduced her brother as well. There’s a genuinely crazy twist near the end that marks a welcome surprise from the rest of the movie, but for the most part this is 100% standard Tobalina.

CASANOVA ends seemingly mid-scene with a title card threatening a “worthy sequel” coming soon, but it would be five years before CASANOVA 2 was released in 1982. Running over 90 minutes, CASANOVA 2 is a complete train wreck that is difficult to sit through. Opening once again in 18th century France, CASANOVA 2 recaps some of the story of the first film before showing how Casnova’s son Don Juan (Bjorn Beck) was conceived when Casanova saved a woman’s life after almost killing her in a duel. The movie then follows the erotic adventures of Don Juan for about half an hour before jumping to the 70s and recapping the rest of the first film. This includes a full 20 minutes of footage from the first movie; in case the viewer forgot any of John’s sex scenes from that film, they are all represented here. John and his therapist convince scientists to market Casanova’s perfume (by instigating an orgy, of course), and the movie finally staggers to its finale with a fake newscast made by throwing in what looks like footage of sex scenes from a lot of completely unrelated movies while William Margold, Ann Perry, and Maria Pia act as newscasters. Seems everybody in the world is making love, not war, all thanks to Casanova’s perfume. Cue mushroom cloud stock footage(?!?) and credits.

The Scott McHaley double feature disc starts with FAST CARS FAST WOMEN (1981), a dramatic thriller set in the world of competitive racing. Kristy (Sylvia Benedict) joins a Formula One team owned by Molly (Kay Parker). Kristy’s old friend Casey (Carolyn Jackson) races for the same team, but the team’s other car is out of commission after a fatal accident killed its previous driver, who was the sister of team mechanic Doug (Rocky Balboa). Doug suspects the car was sabotaged by rival team owner Orson (Al Chiurrizzi) and his henchman Dutch (Ron Jeremy). A pair of masked men break into Doug’s garage and send him to the hospital, leading Orson’s mechanic John (Kevin James) to defect to Molly’s team. The fact that Molly and her female drivers like to spend their downtime partying and having sex with each other was probably also a strong incentive. Will Kristy drive the cursed car to victory over Orson, or will he and his goons repeat the tragic past?

FAST CARS FAST WOMEN is mostly fun and well-made, using a mix of stock footage and new shots of its actors driving real race cars and at a real professional track to create the illusion of a much higher budget than McHaley had to work with. It looks like a comparable mainstream independent movie from the early 80s, although the quality of the stock footage is distractingly different from the rest of the movie, especially given Vinegar Syndrome’s typically excellent video presentation. The cast was clearly not hired on acting ability, although Kay Parker is great as Molly. For the most part the tone is light, but there’s a really unpleasant scene where Dutch forces his way into Kristy’s trailer to rough her up on Orson’s orders that stands out as a glaring exception to the rest of the movie’s sex-positive vibe. Dutch offers Kristy the option of performing oral sex on him rather than getting beaten up, and although Kristy’s teammates interrupt them in the middle of the act, the inclusion of this rape scene is a grim reminder of the misogynist attitudes that pervade too much of adult cinema.

STARSHIP EROS (1979), McHaley’s first feature, follows the all-female crew of Feminist Regime Starfighter Eros as they leave Earth for a mission that pits them against the deadly Amazoids in the far-flung future of 1995. This film was clearly made on a minuscule budget, and its charms mostly lie in its low-rent sci-fi trappings. There are some hilariously cheap-looking video starship effects and a frankly adorable miniature space station and launch pad, as well as a couple of really cheap spaceship interiors and a robot assistant named Quasar (Mike Ranger) that is just a guy in a plastic C3PO mask and shiny vest with a pair of black sweatpants with a tearaway crotch panel. Once again, the tone is mostly fun and light, but there is an uncomfortable scene in which Commander Venus (Lily Rodgers) punishes new crew member Christine Moon (Becky Savage) for interrupting Quasar in the midst of his duties to pleasure her. The punishment consists of Christine being strapped nude into a chair with stirrups while Venus pinches, prods, and fingers her while pointing a ray gun and shooting her in various places. Like the rape scene in FAST CARS FAST WOMEN, it’s a scene that breaks the tone of the whole movie. McHaley’s features might pass the Bechdel test with flying colors, but they’re hardly as female-friendly as they might first seem.

As is the Vinegar Syndrome standard, both double feature discs include each film scanned and restored in 2k from 35mm camera negatives and they look fantastic. As noted above, there is some wildly varying video quality in FAST CARS FAST WOMEN when it uses stock footage, but the rest of the film looks great. The CASANOVA disc includes trailers for both films, while the McHaley disc features a trailer for FAST CARS FAST WOMEN as well as what appears to be a reel of softcore outtakes from the film. These look like they’re just different angles than the ones used in the feature, as there is still some penetration clearly visible. This may explain why there was never a full softcore cut of the film. There is no trailer for STARSHIP EROS, but there is an audio introduction by producer Wesley Emerson that offers up a bit of fun information. These two discs offer a good look at the strengths and weaknesses of the Peekarama line and its all-inclusive approach to archiving adult film history. While both discs feature content that prevents a blanket recommendation—the McHaley films’ uncomfortable misogyny, the fact that the other disc is two more Tobalina movies—they do both represent vastly different approaches to adult filmmaking during the late 70s and early 80s.