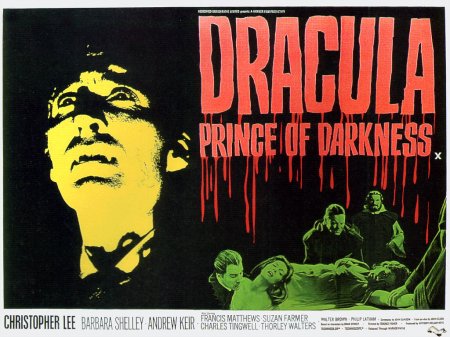 We reported the rumblings last month and now we have confirmation. A collection of companies including StudioCanal, Germany’s Anolis Entertainment, U.K. studio facility Pinewood and illuminate Hollywood fka HTV are coming together to bring the legendary House of Hammer to Blu-ray.  With over 30 movies getting the HD treatment for a U.K. release, this is one of the larger restoration projects we have heard of since Universal announced thirteen titles getting the Blu-ray treatment back in January. It’s only a matter of time before the titles see a release here in the states. Until then, fire up those region free players, Yanks! Let’s cut the intro short and jump to The Hollywood Reporter for the full skinny.

Hammer, now a part of Exclusive Media, said materials for the project will be provided by Hammer’s original U.S. studio partners including Twentieth Century Fox, Warner Bros. and Paramount Pictures.

DRACULA PRINCE OF DAKRNESSwill be the first title scheduled for release in the global restoration project and will rollout in the U.K. in conjunction with StudioCanal in March 2012.

The partnership continues throughout the spring for the releases of The Reptile and The Plague of The Zombies, and will also include The Devil Rides Out, Rasputin the Mad Monk and The Mummy’s Shroud during the course of the year.

Hammer will also release definitive versions of a trio of famous titles in the U.K.: The Curse of Frankenstein, Dracula and The Mummy.

As well as featuring a fully-restored HD picture and restored sound, the re-mastered films will include newly-filmed extras, including interviews with cast members, the partners said.

The documentary extras are being produced by Hammer expert and historian, Marcus Hearn – author of the recent “The Hammer Vault”.

Hammer president and CEO Simon Oakes said: “Our decision to restore some of Hammer’s most famous titles not only allows existing fans to experience the films again in high definition, but also encourages a new global audience to discover Hammer for the first time.”

It comes as Hammer gears up for the release of its latest Hammer project The Woman in Black, starring Daniel Radcliffe.

“We have a busy year ahead but are confident that our Blu-ray plans will ensure that Hammer’s legacy will live on for generations to come,” Oakes said.

Studiocanal U.K. home entertainment general manager U.K. John Rodden said: “The great Hammer films are uniquely stylish and ceaselessly entertaining. Like the vampires and other supernatural forces they depict, they appear to be deathless, re-emerging relentlessly to thrill and terrify new generations of film fans.”