I have a great, bizarre respect for the producers of artwork for Retromedia Entertainment titles. When Vinegar Syndrome releases a vintage piece of exploitation, they tend to utilize the original poster art to give audiences of today the same come-on that the original theatergoers would have gotten. When Retromedia does it, they make sure to take the adage of “SEX SELLS” into full account. 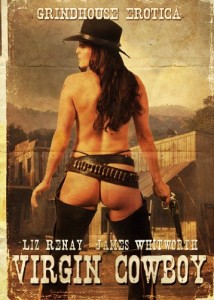 Take VIRGIN COWBOY, for example. The DVD box art features a woman who looks to be in her twenties, wearing nothing but boots and a gun belt, her head turned slightly to the left as though daring you to judge the bare ass to which her long, brown hair gently points. It points out the stars, DESPERATE LIVING’s Liz Renay and THE HILLS HAVE EYES’s James Whitmore.

VIRGIN COWBOY features nothing that resembles this cover. It’s a 1975 comedy-western with a smattering of nudity, and the youngest person in the film looks to be in their mid-30s. There is no scene where a mostly-naked female wields a gun. And Renay and Whitmore both have very minor roles.

But, hell, I admire Retromedia for trying to get the attention of today’s reckless youth who would be lured in by such a thing. It’s certainly not as though the original poster art is less misleading – it makes it look like a sexually-charged, action-packed take of love and vengeance, and famed stripper Renay is again prominently featured, despite her role in the film taking up less than a couple minutes of screen time. At least the art lets you know the approximate era the film was made. 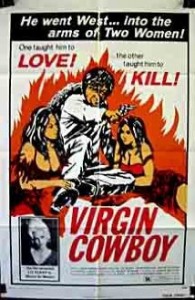 The truth is that I’d have no idea how the hell to sell VIRGIN COWBOY either. The sole directorial credit of George Watters, a television editor who worked on “Land of the Giants” and Gene Roddenberry’s PLANET EARTH, the film opens with a bank robbery in a small town in the old west. When one of the robbers is shot to death during the getaway, his easily identified assassin gives his coat and green suitcase to the naïve Whit Barlow (John Armond) with the promise of $5 if he takes them via Wells Fargo wagon to the nearby town of Tombstone. Barlow agrees, but soon the gang is gunning for his head under the idea that he’s the one who killed their member.

In Tombstone, the hot spot is Minnie’s, a brothel where a man can get a good bath and a little something extra, run by “special guest star” Renay. Gang leader Ridson (John Donovan) takes a bath with the help of ornery staff member Kate (THE DOLL SQUAD’s Bret Zeller), but he uses another worker for his sexing, which he does while giving orders to one of his men. Meanwhile, Barlow makes his way to town accompanied by goofy music, narrowly missing the gang as he makes his way to Minnie’s in order to get washed up. 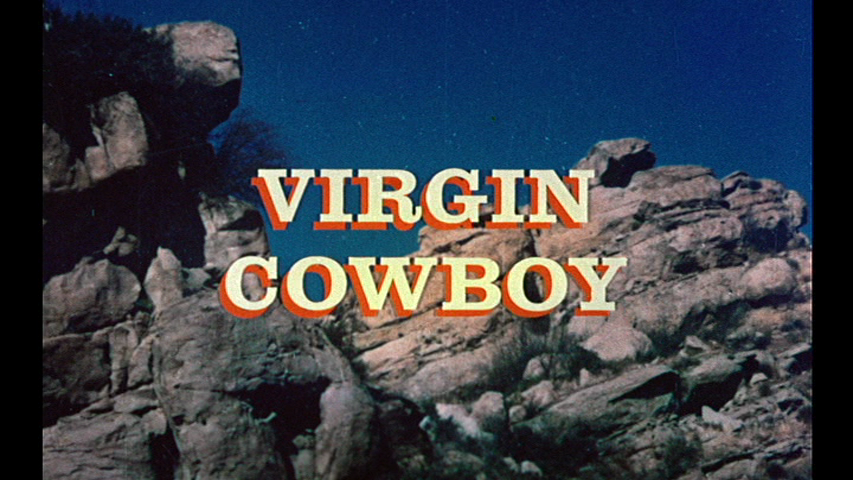 And yes, a bath is all he wants, as he’s the titular character – at least for now. Kate tends to his needs, but he’s terribly shy, even after she taunts him with “I think you’re afraid to take off your britches in front of a woman.” She eventually gets him declothed, and he gets himself clean, however, and Kate finds his innocence endearing. The gang, however, interrupts their budding romance and soon the pair are on the run, with Kate seducing the innocent “young” thing despite him thinking that his desires are a “sin against the holy book.”

Eventually, a love triangle develops in the form of Tina (Karen Lindsay), a local Mexican girl who falls for Whit, much to Kate’s chagrin. Whit doesn’t mind her affections much, especially as Kate continues trading her body for supplies in order to keep them alive, but the jealousy soon comes to a head just as the gang closes in. It ends on a surprisingly downbeat note, especially as the film wavers between being played for humor and emphasizing the brutality of the robbers – you get spry, happy music one minute and a rape scene the next. 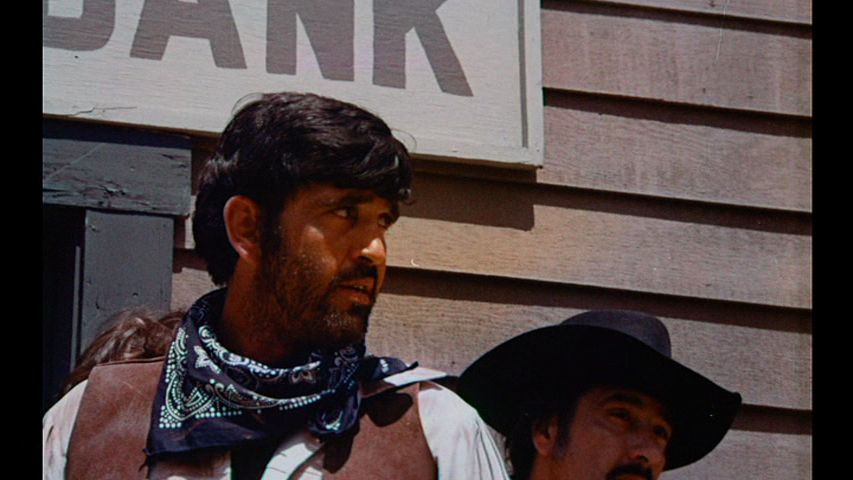 While there is nudity in VIRGIN COWBOY, for the most part, the sex sequences are pretty cool, cutting before the action gets too spicy. With a plot device involving men bathing, Kate’s tendency to disrobe Whit before she removes any clothing and our lead character’s occasional skinny dipping, VIRGIN COWBOY almost feels like a CFNM fetish film with a cowboy theme, and while there’s nothing wrong with that, they probably could have cast slightly less dumpy actors who knew well enough to shave in certain areas when they were going to be drenched with water and viewed from the back. There’s certainly female nudity as well, but the sex scenes are surprisingly chaste for the time, especially in comparison with Renay’s other 1975 film, MARILYN AND THE SENATOR, a hardcore title recently released by Vinegar Syndrome! It’s possible that there exists a steamier version out there somewhere – producer Cal Vista International Pictures dealt almost exclusively in hardcore films, such as 1974’s ANGEL ABOVE, THE DEVIL BELOW and 1977’s FOXY LADY.

Retromedia’s DVD presentation is, as far as I can determine, the first time the film has seen a release since its original theatrical run. The print used is clearly worn and there’s a fair share of grain, and there is some warping about 22 minutes in that briefly causes the print to appear much more green than was originally intended. That said, it’s still a watchable presentation, and you’ll never wonder what’s happening on screen. The sole extra is a stills gallery of Liz Renay pin-ups – I’m honestly surprised no one has yet made a longer featurette on her fascinating life and work. 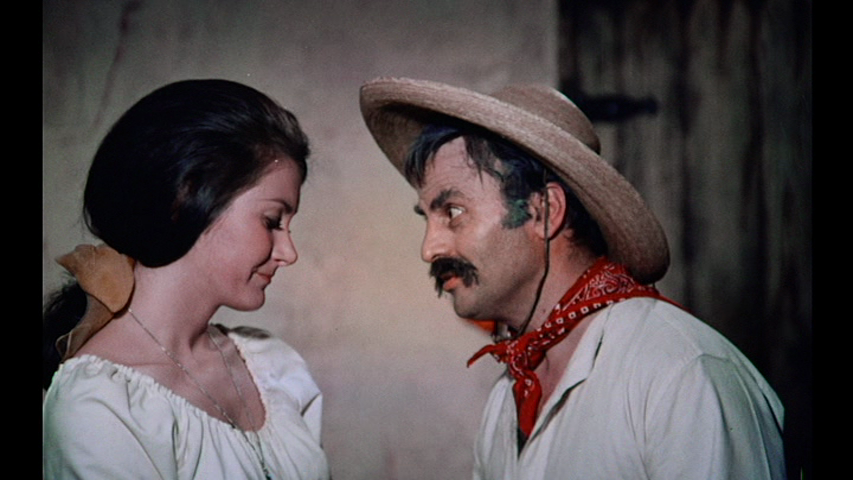 VIRGIN COWBOY is certainly a unique film that warrants more attention than its meager reputation has offered, if only because it’s shot and acted like a low-budget western made two decades earlier, with some sex added and filtered through some solid color cinematography and stock music that make it feel significantly more epic than it actually is. It’s an oddly endearing little western with a few strangely edited sex scenes that, while never particularly memorable or well-made, is a suitable curiosity for exploitation film fans that I’m glad is finally seeing the light of day. 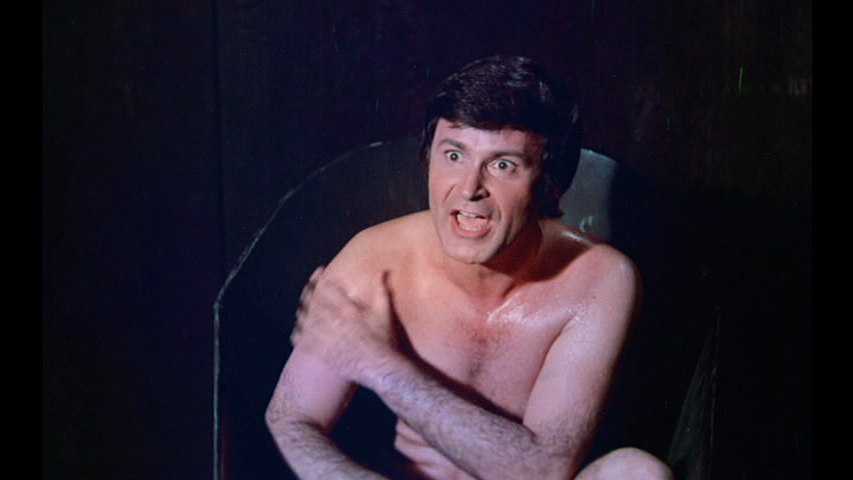