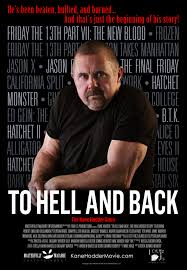 Ostensibly, a filmic companion to Michael Aloisi’s and Hodder’s literary companion, Unmasked: The Story of the World’s Most Prolific Cinematic Killer – TO HELL AND BACK travels the brutal road that Kane took from being a teenager bullied by ruthless assholes in California in the late ‘fifties to the gruff but lovable stuntman and actor we’ve loved for years and years. His story is backed by numerous talking heads such as Hodder superfan Adam Green (who truly gave Kane a pedestal to shine on with HATCHET), Bruce Campbell, Robert Englund, Cassandra Peterson, Sean Cunningham and numerous friends (who would’ve thought that HEROES star Jack Coleman was close friends with Kane?) and family all of whom sermonize that Hodder is one of the nicest guys working in film. Some of the stories he tells are hilarious, like the legendary one where he tangles with an idiotic sheriff while filming FRIDAY THE 13TH VII: THE NEW BLOOD, or his easygoing ribbing of the doctor who saved his life in the burn clinic – he pivots from sincere to playful needling (easily the biggest laugh of the documentary). The stories with his family are so engaging and heartwarming; they could warm the coldest exteriors.

The meat of the matter in the documentary is Kane’s disclosure of the past traumatic experiences that have shaped him. The stories behind the bullying and the burning are harrowing and effectively told. Having these integral moments broken down in minute detail ensures that not only are his tales unforgettable — they’re inescapable. You should feel uncomfortable, not just because of how traumatizing it is to hear the prolonged nightmare he went through after his fire stunt gone wrong, but you should pass on the other side feeling genuine human compassion for a person who is opening themselves up to you in a nakedly open way. When Kane was detailing the bullying, I flashed back to my own bullying and high school, and what his story did is served to tether a true human connection to a person I’ve never met, but have now felt in my heart. What TO HELL AND BACK does splendidly is tell you that despite someone having a tough guy persona, it’s okay to be sensitive about the worst moments in your life. Not necessarily to be soft, but to be open about your life. It’s not about running from the truth, but running towards the truth. To see Kane break up while describing in vivid detail the worst possible moment of his life is truly touching, and to see him come back from the darkest days of his life with a wholly positive outlook is truly inspirational. This documentary should be shown to youths who are struggling with bullying and depression. It’d make a hell of a mark, especially considering that a healthy majority of depressed teens are routinely ones who dabble in heavy metal and horror. To see an icon be so transparent about their struggles would make a marked difference on horror hounds everywhere. 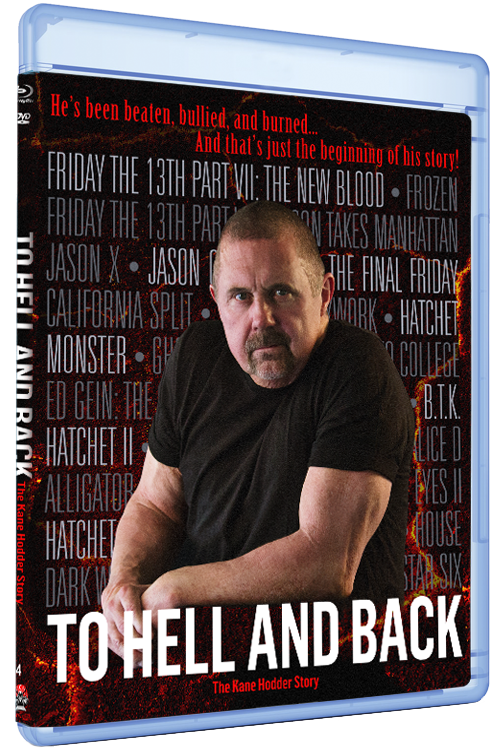 There are a few elements I wish were elaborated upon in the film, namely Hodder’s return to the FRIDAY THE 13TH franchise with the game, a role he was specifically brought back for because of his iconic physicality. We all know Kane’s story behind the deep-rooted disappointment of losing the role in FREDDY VS. JASON, a role that he himself championed for the years it languished in development hell, so it would’ve been nice to hear about his return to the role of Jason Voorhees and the  sheer excitement Hodder must’ve felt that all these years later, after losing his character, that he won in the long run.  Or the fact that Kane is one of the rare actors to play Jason Voorhees, Freddy Krueger, and Leatherface (in that indelible trailer!). But these are minor squiggles in the grand picture of his luxurious and hardened career.

Listening to Kane talk about how he formed the movements and actions of Jason Voorhees feels as natural as breathing air, and to see the extent of his preparation to get in the mindset of a newer horror icon like Victor Crowley with the mindset of knowing the dark places he travels to, the depths he plumbs to tap the rage of these brutal monsters. He was able to walk away from the darkness, but he can keep it in reserves for his purpose now. He owns his darkness and he makes it work for him. Underneath his gruff, mountainous exterior (and his memorable “Kill” tattoo) lies a soft-spoken spirit (his one rule as Jason was that dogs and children were off-limits) and one the world is happy to welcome with open arms, right up until Kane gives you his patented strangling, and then you can die happily having your larynx crushed, knowing that the hands that are doing it belong to a kind spirit who’s been to hell and back.

Thank you for telling your story, Kane.