From the first moment the announcement that there would be a next-gen FRIDAY THE 13th game coming out, I was in hog heaven (or is that Higgins Haven, EDIT: no, it’s still wrong) because there had only been one FRIDAY THE 13th game in my entire gaming life and frankly, it wasn’t exactly the hottest of licensed horror games in a long list of badly-licensed horror games, ranging from the Atari version of HALLOWEEN and THE TEXAS CHAINSAW MASSACRE to the four-player (!) A NIGHTMARE ON ELM STREET. The game was to be a crowd funded effort and reached its goal easily, as anyone with a brain in the horror community knows that we are starved for anything and everything FRIDAY THE 13th. Take note Paramount, this game sold like gangbusters. The audience is there. They’re hungry for Voorhees mayhem. As anyone who knows me, whether online or in person can attest, I’m a huge FRIDAY THE 13th fan, talking about it at length and having written a long defense of its most maligned entry, Jason Goes to Hell. Naturally, I dropped my contribution in the collections bucket and eagerly awaited for the game to have its release. 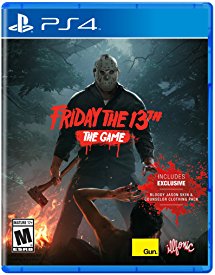 FRIDAY THE 13th: The Game is one of the most fun experiences you’ll have in a horror game. The maps are lovingly recreated down to the simplest details. One time, I went through screen-shotting the Packanack Lodge from FRIDAY THE 13th PART 2 and looked at the game’s map and noticed exactly how much they got right, up to the gutters on the side of the house and the rock formations behind the counselors as they meet with Paul Holt for the first time. Once the Jarvis House map was released, a few friends and myself geeked out at the level of detail in the “party house” and in the Jarvis (sandwich) house, to the point where I knew if I walked up the stairs around the bannister to the door on the right, I’d be in Tommy’s room. Going even further, I’ve spotted the bikes that the twins ride in THE FINAL CHAPTER are parked right outside the party house, I’ve spotted the gravesite the kids park near when they’re lost in the woods and lastly, the inflatable raft where poor Samantha meets her early demise. I’ll have to stop there, because if I pointed out all the small details and callbacks to the films, we’d be here all day.

This attention to detail though wouldn’t matter for anything if the game weren’t any fun, and fortunately it is. Some matches are lightning quick and Jason lays waste to all the counselors strewn across the map within a matter of minutes, doling out all sorts of kills from slit throats to chopped limbs and crotches, and the kill that feels most like Tom Savini’s splatter days (out of all the kills he did design for the game) is a cruelly funny kill, where PART 2 Jason slams a pickaxe into the side of the head of your unfortunate counselor, then twists it around until your head falls off. It’s called the Corkscrew. Or you pull off a gambit like my lovely friends Neil and Brad pulled off with me where we put the vehicle together and escaped the Crystal Lake map in under four minutes (maybe it was three?) like some sort of computer generated A-Team.

Other matches take longer, where your counselor wanders through the dark woods, seeking parts to repair the boat, car or phone box in hopes of some sort of rescue or escape; this is where the game feels most authentic. One minute, you’re in a cabin rifling through drawers and hoping for keys or a pocket knife, and you hear the scream of a counselor being murdered, their death rattle echoing through the map for as a warning of the impending death headed their way if they don’t hurry up and get the hell out. Often I’ll find myself wandering around a map, thunder and rain clashing in the sky, and realize that I’m all alone on the map, with only Jason to keep me company. The isolation is bone-chilling sometimes, the atmosphere nearly smothers you with the fog rolling in, and the natural sounds of the woods creating an element that makes you feel like you’re in the movies. What the game does best is the previosuly mentioned authenticity: if you’ve got a good counselor playing and an even better Jason playing, you can downright recreate the creepiest and thrilling moments in the best FRIDAY films, your hands sweating on the controller and your heart pounding in your chest.

The real key is to find a group of like-minded indivduals who love the movies and love to game. I recommend private matches, mostly because it cuts out the terrible riff-raff that comes with engaging other online personalities (which … more on that later). That’s not to say that public matches can’t allow for meeting new and interesting people, like my crazy buddy MaryPerry, but more often than not, you’re stuck with a bunch of selfish people without mics and that’s no way to play a game that is about the engagement. So, I’ve made friends with a lot of people through this game as well like Bloody Disgusting contributor Trace Thurman or Dread Central contributor Brad McHargue. I’ve had the distinct pleasure of becoming fast friends with these folks, something that never would have happened if I’d never bought the game.

And that’s why I love it so much, because it allowed me to meet these lovely people online and in person, and that’s far more priceless than throwing down thirty bucks on a game. The memories of my friend Trace driving a car and wrecking because he played the while inebriated (which is the absolute best way to have a blast playing it), or me trying to shoot Jason while he grapples my friend Trevor (or Neil) and killing two counselors at once, getting the sweet, sweet betrayal bonus. Probably my favorite memory of the game was playing as PART 8 Jason on the Higgins Haven map, hiding in the nearby lake waiting for my friend Brad to finish repairing the boat, and he was playing as Chad, arguably the slowest repair character in the game. As soon as he was finished, he sped off across the lake — and I immediately pulled him out of the boat and drowned him.

On an even more personal note, and one of the reasons why it’s the best game to me: is that it’s become a family game for my household. My five-year old loves any and all things horror and loves Jason Voorhees. She’ll play the game, mostly just because she likes the changing the costumes on the avatars or just wandering aimlessly around until she finds a part to pick up for vehicle repair, at which point I take over to help. She’s even picked her favorite Jason (Farmer Jason) and usually loves to choose characters like Vanessa or Tiffany (who happen to be the two most useless characters for repair in the game. Thankfully, she’ll play as A.J often. I’ve even slowly started her into the movies, sheltering her from violent and sexual content, but allowing her to see her hero chase down those rotten teens. My wife also got hooked on the game as well, and she isn’t a particularly avid gamer herself, favoring lighter games like Super Mario Galaxy (which is a way tougher game) over ultraviolent games. But here she was, hooked on the game, playing far more often than I was, and leveling me up and finding two goddamn Pamela tapes. Seriously, I’ll never find a freaking tape. My two-year-old son has only caught glimpses of the game as well, and a) can identify snippets of Harry Manfredini’s score when I listen to it in the car (he shrieks, “JASON!”) and b) sees every establishing shot of the woods as FRIDAY THE 13th. 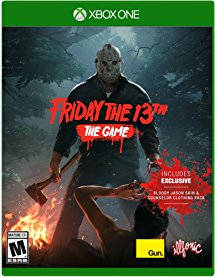 Is it the most technically proficient game released this year? Not particularly. It has game crashing bugs, hilarious glitches and far too often the game locks up and makes it nigh unplayable for even a party of four people itching for violent mayhem. A far more prevalent problem is the host of the parties the player is put in, where people will either quit because they were killed, or because they weren’t chosen to play as Jason. There’s also the sheer amount of hate spewed  by little squeaker kids who probably shouldn’t even be playing a game based on an R-rated property, but what the hell are you going to do?

And I know it seems like I’m being hard on the game, but I’m truly not.  This is the reality of the game, and the unfortunate downside of being an indie production company like Gun Media, a company that has a small staff working around the clock to fix all the bugs. The mistreatment of the smaller company over a company like Bethesda, whose Fallout games are notorious for their game bugs that create outrageous problems. To their credit, the staff at Gun Media work their asses off to do it all for peanuts, and offer  free DLC upgrading the game in many ways or charging mere dollars for enhancements to the game, allowing for longtime gamers to find a reason to come back for more, like the recent additions of the Jarvis House map and a Jason skin from THE FINAL CHAPTER.

Alas, we are a society that demands more and more no matter how much we’re supplied, so this community thrives on the disgusting and abhorrent it often spews on a daily basis, which is why I don’t even want you to get me started on the poisonous social media community for the game, whereupon internet commenters will debate and fight amongst themselves, screeching about refunds for the game because of the aforementioned bugs or viciously crying that the game is inferior to the lesser Dead by Daylight, again despite the near constant flow of FREE CONTENT. Truly a massive bafflement for the ages.

I leave you with this: FRIDAY THE 13th: The Game isn’t a triple-A title like this year’s Resident Evil 7 or The Evil Within 2, (both excellent sequels to their franchises) or even the scariest game (hello, Outlast II), but it is the best game for what it was created for: a love letter to a franchise that gave a hell of a lot of joy to young VHS-addicted minds that caters to the gamers we grew up to be. And yeah, maybe I’m looking through Friday tinted glasses, but I can see this game for what it really is, what it means to me: it’s a game for friends and family. And now it’s only $30. Go out and buy it, get online and chop up counselors. It’s what the day was made for.