The second annual Windy City Horrorama Film Fest is coming to the Davis Theatre this April and early-bird passes are now available. 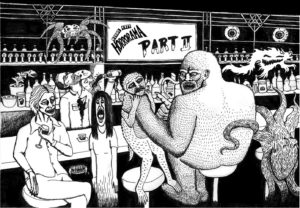 In its inaugural year, WCW hosted a 25th anniversary screening of JASON GOES TO HELL: THE FINAL FRIDAY with director Adam Marcus in attendance as well as his latest feature, the fun and gory SECRET SANTA. On the local front, the festival featured Daily Grindhouse’s own Jason Coffman’s feature debut, HOUSESITTERS.

The up and coming festival promises to bigger and badder this year featuring all the best local talent as well as world premieres from around the globe.

The festival is also hosting a fundraiser brunch at Fat Cat Chicago (4840 North Broadway Avenue) on Saturday, February 16th. The Horrorama team will be hosting three classic horror films, perfectly paired with your avocado toast, mimosas, and of course, Bloody Marys. Simply mention “Horrorama” to your server and 15% of your order will go to the festival. It’s a great way to get to know the team behind the fest and maybe meet a few new horror enthusiasts in your neighborhood. Brunch at Fat Cat runs from 10 A.M. to 3 P.M..

Windy City Horrorama will run from Friday April 26 to April 28 at the Davis Theatre in Chicago (and yes, there is a bar on premises). A limited number of early-bird tickets are available at the low, low price of $80 (a $200 value). You can purchase your passes right here through Brown Paper Tickets!

Stay tuned to Daily Grindhouse for all the latest announcements on events and screenings.