Home  ⁄  The Wire  ⁄  WHERE RESIDENT EVIL WENT WRONG: HOW THE FILM SERIES FAILED GAMERS AND RESHAPED A FRANCHISE

From the moment of its release on the first PlayStation console on March 22nd, 1996, RESIDENT EVIL had been stirring the imaginations of its many players, making them wonder just how they planned to adapt the gripping survival horror saga to the screen so that audiences who didn’t dig into the games could enjoy the scare equally. Fans pored over gaming and entertainment magazines if they caught the slightest whiff of a movie being adapted from Shinji Mikami’s spookhouse shocker. Folks like HALLOWEEN 4: THE RETURN OF MICHAEL MYERS screenwriter Alan B. McElroy were looked at to pen the movie. When it was announced that George A. Romero was going to take a crack at the material, it assuaged a lot of concerns anyone may have had that the project wasn’t being taken seriously. There were also some interesting actors touted around this time – tough guys like Bruce Payne– the meanie from PASSENGER 57, but more importantly, Nu-Warlock—was floated for Albert Wesker. Then there was Samantha Mathis, who had proven her ass-kicking credentials on John Woo’s BROKEN ARROW, and Jason Patric, who would later go on to fight a cruise ship.

Romero’s script made some interesting changes to the source material: Chris Redfield was now a Native American gentleman, Jill Valentine still worked for S.T.A.R.S (and was in a relationship with Chris), and alongside her was the sunglasses clad villain, Albert Wesker. Despite some cosmetic changes, it retained what made the game fun and interesting – the zombies were there, the giant Plant 42, the mutated sharks and the Hunters. But this didn’t make the suits happy. They wanted something completely original, ignoring the simplest element– that fans who enjoy a piece of media don’t need something completely original, just something that keeps us on our toes while retaining an integral piece of the intellectual property. 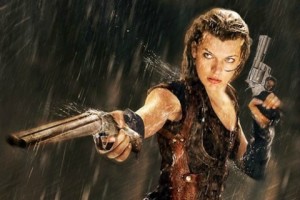 Perhaps the biggest failing of the RESIDENT EVIL films when comparing them to the games is how they lost their spirit in translating the source material from the home console to the silver screen. This isn’t simply about the movies not adhering to the survival horror mechanics in the video game. No one would particularly care to see Chris Redfield standing in a hall debating over whether or not he has the item space to carry keys, health herbs and bullets (an absolute nightmare for the average gamer playing RESIDENT EVIL: CODE VERONICA, Jesus Christ). That’d be boring for the passive observer. That’s fine. It’s about the game devoting itself to the inherent campiness in the story and the movies ignoring that largely because they think people don’t want to see it. People do, though, and that was missing. RESIDENT EVIL has a phenomenal hook in its first game. The plot is a line of pure, uncut, 42nd Street celluloid. All the trappings are there – a haunted house with clichéd soldiers (a diverse crew, notwithstanding) who love to speak in poorly scripted, poorly acted soundbites. More importantly, it had rotting zombies, goopy amphibious beasts, and giant spiders. The original title, BIOHAZARD, is so exploitative it can’t help but lend it that dangerous edge that accompanied the pale, Italian horror knockoffs of the eighties, like SHOCKING DARK. It’s terrific stuff that would’ve been better aided by a low-budget and trash gurus like Bruno Mattei or the schlockmeisters at Cannon Films.

Instead, what we’re left with in Paul W.S Anderson’s version of RESIDENT EVIL is action that feels too clean and sterile when it should be gritty and gory. Anderson knocked EVENT HORIZON out of the park because he and his writer were able to craft the story out of nothing. Here, Anderson doesn’t feel like he meshes with the material. RESIDENT EVIL is made for a Eurohorror director, one that fits better with the trashy stuff. You need someone like the Stephens (Norrington or Hopkins) or Renny Harlin. Those are fellas who know how to staple an ass to a seat and give you a show. In Anderson’s take, the acting is too polished; it’s acting that treats the material as camp when it should be played deadly serious. The acting in the first game is dogshit, but it’s key to why folks love to play the OG RESIDENT EVIL. “Jill Sandwich” is the kind of thing that lives in infamy, because it’s one of the dumbest things ever. It’s the jump scares without the ambience and atmosphere, instead of thick tension that builds to a merciless fright. It’s a shame that the movies never achieved anything approaching the spine tingling shock of the “Itchy, Tasty” letter and the zombie bursting from a closet immediately after you’ve read the horrifying log. When you load up a game, you’re presented with text while the game loads: “Are those faint sounds of footsteps those of survivors?” It’s a simple but precise nightmare.

In the way of a soundtrack we get a technobabble score by a disgraced sex predator, instead of soothing piano cues that wash the fear over you – folks, it’s wonderful to chill in a safe room and listen to the music themes wash over you. Lastly, what may seem like a silly minor quibble – the movie shoots its characters into the lab setting almost right out of the gate, where in the game, it’s a gradual journey – is perhaps the greatest annoyance. It’s far more insidious to learn that something massive and sinister lurks just beneath the typical surface. A mansion housing a super-secret laboratory? Preposterous and outlandish, but it works a lot. Even the baked in backstory– that the mansion’s owner, Spencer, is a spy novel fan and thus has set up all these traps and puzzles– is unique. Sure, the movie offers traps just as the game series has happily done, but it doesn’t allow us to connect with it, unless our asses are on the line. Even when the movie does offer the types of traps that are the Spencer Mansion’s bread and butter, they’re just ripoffs of something done way better in the movie CUBE; and then that ripoff gets its own ripoff in a video game set piece in RESIDENT EVIL 4. 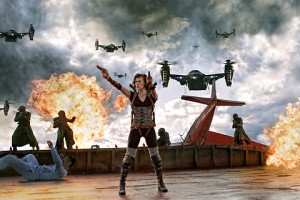 That last bit is becoming a thorn in the proverbial side. Once the movies started gaining prominence, it became apparent that the movies began influencing the games rather than vice versa. Yes, RESIDENT EVIL 2, RESIDENT EVIL 3: NEMESIS and the aforementioned CODE: VERONICA started to layer in more action amongst the horror elements, but by the time the well-received fourth entry was released, the die was cast, Leon Kennedy (RESIDENT EVIL 2’s lead) was going to be one of the franchise’s biggest stars (along with Chris, Jill and Mr. Sunglasses at Night-Wesker) and emphasis in the games was going to be on action, just like the movies. Gone was the stress over saves, over bullets and health. You had that kind of stuff in droves and you had the big, bad monsters to fight over and over again, where the battles prior felt small-scale and intimate. Don’t get me wrong, bone-crunching action and nifty stunt work is often excellent to interact with and watch, but again, it lost sight of what made that first experience special. Now, the games and the movies ballooned in scale and action, often by topping each other and becoming a global action/espionage series with hints of horror throughout. It blew up so much that the game and film franchises became disjointed, illogical noisemakers and had to reset their respective stories to revert to the roots of what made RESIDENT EVIL so special.

First it was RESIDENT EVIL 7: BIOHAZARD in January of 2017, shifting the series focus back to scaring the shit out of its gamers, while emphasizing the action gaming mechanics of the later, adrenalized sequels. At this time, Paul W.S Anderson was ending the film franchise on his terms, with mixed. After that, gamers lucked out and Capcom released two remakes of RESIDENT EVIL 2 and RESIDENT EVIL 3: NEMESIS that took their cues from part seven’s mix of horror and action and despite their short length, were received warmly. It was the best possible outcome for fans of the game. The studios listened to those folks who picked up the controllers and it paid off handsomely. Now, with Johannes Roberts’ new take on the game franchise, scheduled to release in theatres in 2021, it’s not hard to see a vision where the director seems to understand precisely the lure of the games, one that is a type of remix of the game series (adding in many of the game’s vibrant characters), but seems to be welded to the survival horror aesthetic that the games popularized nearly thirty years ago.