It’s time for me to make a concession that’s probably going to result in my losing some major horror cred, but, I’m tired of hiding. I’ve long thought of myself as someone who’s unashamed of the stuff I’m interested in, and have encouraged others to have the same attitude, so it’s a bit hypocritical of me that I’ve never talked about this, or discussed it in any meaningful way.

Yeah, the Stephen King book. Yeah, the one about the killer car. No, I’m not thinking of Carrie (though I love that one, too).

I know that a lot of fans see this as an early crack in King’s veneer, that it’s the source of the stereotypical joke that his formula became “person encounters haunted x.” I know that it’s probably longer than it should be, and I know that the second act shift to third person perspective from first person was just a convenient excuse to expand the action beyond Dennis’ perspective.

But it’s also a book about a killer 1958 Plymouth, and something about that is just awesome.

I do have a deeper reason for liking it, though, one that maybe wasn’t even King’s intention in writing the book. Or maybe it was—just when the hater or doubter thinks that King is only a horror writer, he’ll pull out something profoundly deep or insightful and wallop you in the face with it like Leatherface’s sledgehammer. Whether it was by accident or design, though, Christine is a fantastic parable about the legacy of the 1950s, the potentially corruptive nature of nostalgia, and toxic masculinity.

Though the book as released in 1983, it takes place between 1978 and 1979. For a modern reader it may seem strange to set the book so recently in the past, but this seemingly banal time shift points to King having more in mind to say than simply “killer cars are cool.” Having the book take place in ’78-’79 places the story firmly in the era of the 70s nostalgia craze for the 1950s. Media like AMERICAN GRAFITTI and Sha Na Na had given a nation worn out on war, political corruption, and cultural malaise something to embrace. To Americans of the 1970s, the 50s were a purer, better time, something far enough in the past that it was ripe for romanticization but close enough that it still felt tangible. Far removed from Vietnam and Watergate, it was an era of sock hops and drive-ins, where happy teenagers fell in love and got married and became happy suburbanites, wearing swank clothes and listening to awesome music and driving cooool cars. It’s this very nostalgia that’s at the heart of Christine—it’s no coincidence that the titular deathmobile is a 1958 car. Though the decade was ticking to an end, the nostalgia craze was still alive and well—Happy Days was going strong and Laverne and Shirley had just premiered two years before. It’s against this backdrop that dork Arnie Cunningham finds and falls in love with the titular automobile—a living embodiment of the era everyone around him has romanticized to near-Arthurian levels. 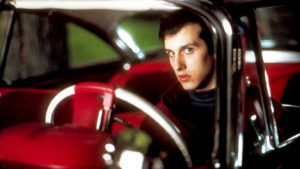 It’s no surprise that Arnie is susceptible to the allure of 50s nostalgia: Acne ridden, physically weak, dominated by his parents and perpetually beaten and tortured by the school bullies, there’s virtually nothing positive in Arnie’s life that would tie him to the present day. Christine, though—and through her, the 1950s—offers him an escape not just through the distraction of having a project to work on, but an era into which he can escape. It’s through Arnie’s romanticization of the era that King dissects the dark heart of the 50s (or really any) nostalgia craze: the good old days were rarely, if ever, that good; and the 1950s weren’t that far removed from the 1970s. Yeah, the economy was better, but the 50s also gave us Korea, the Red Scare, racist backlash to the burgeoning civil rights movement, and the emergence of Cuba as a new and threatening enemy. Hell, Nixon was even in the White House during both eras. Most importantly for purposes of the story, though, the 1950s was an incredibly socially repressive time. In perhaps an unconscious imitation of its greatest nemeses, America became the closest it’s ever gotten to being a collectivist society.  Men were men and women were women and God help you if you didn’t fit into one of those two molds perfectly. It’s this negativity that Arnie himself begins to reflect as he transforms under the influence of Christine and the ghost of her previous owner, Roland LeBay. His acne clears up and he begins taking care of himself, giving him the superficially handsome, man’s-man veneer of the decade (it’s no coincidence that his makeover entails donning jeans and a leather jacket, the quintessential 50s tough guy look).

He also becomes belligerent, misanthropic, sexist, and controlling, reflecting the worst aspects of mid-century American manliness. Like a good 50s man, he does his job, works on his car, and takes his girlfriend, Leigh, to the drive-in (a 50s hangout that was a dying fad by the time the book takes place). Once egalitarian, he comes to expect that Leigh will bend to his will, accompanying him to college and becoming the model wife. Like the 50s itself, Arnie is prosperous under Christine’s influence, but, like the culture of the decade did to so many, it also erodes his soul. It’s an erosion we get to see through the numerous adult characters of the book, most of whom would have been Arnie’s age in the 1950s. His own parents are emotionally manipulative but spiritually weak, while his boss, Darnell, is involved in dealings with the mob and LeBay himself is a racist, misogynistic psychopath. Volumes are also spoken by the adults who aren’t around, both of whom are women: LeBay’s wife and daughter (who would have been Arnie’s age) are both dead when the book begins. LeBay’s daughter aspirated on a hot dog in the back of Christine, literally choking the life out of her; LeBay’s wife, unable to conform to the 1950s model of femininity and unable to divorce LeBay, killed herself in the front seat of the car.

Furthering the book’s literary credentials, the story also becomes a tale of positive vs. toxic modes of masculinity. Geeky, frail Arnie is shunned by women and beaten by boys better looking, stronger, and more socially capable than he is, but once he gains a shred of confidence, he becomes even worse than them, unable to find a stable middle ground. His best friend Dennis, meanwhile, is a jock, but in defiance of the stereotype, he’s kind and polite, protects those weaker than him, and is respectful of women; ironically, though, it’s not Dennis to whom Arnie looks as a role model but Roland LeBay. Dennis’ ethos reflects a more modern conceit of standing up to one’s enemies and not backing down, while LeBay comes from the more primitive school of destroy your enemies. After a lifetime of abuse, Arnie wants revenge—and not of the living well variety. Like many misogynists, it’s a toxicity that doesn’t come from a place of base hatred of women but one of rejection—after nearly two decades of watching girls date boys who beat him and torture him while leaving him alone at the dance, he’s got a chip on his shoulder the size of that damn car, and for him, every woman—no matter how well they treat him—is just another girl who laughed at him in high school. He’s so swallowed up in his own feelings of inadequacy that even when he does gain some confidence and win the attention of a genuinely nice girl who likes him for his intelligence and humility, he still feels the need to emulate his tormentors.

King may not have intended for all of these themes to be present in the book (or maybe he did), but, they are there, and I have the feeling that, perhaps, it isn’t so much the conceit of “killer car” that’s ultimately doomed the story’s reputation but some of its excesses. It is an unnecessarily long book, striving for epic proportions without the meat to back it up. John Carpenter’s movie adaptation fixes a lot of the pacing problems and clunkier parts of the text, but only scratches the surface of exploring Christine as a living embodiment of the 50s. I’d like to think, though, that at some point both iterations of the story will be reassessed, their faults forgiven and their virtues embraced, and that it’ll take its place among the more intelligent and thoughtful entries of the King canon.