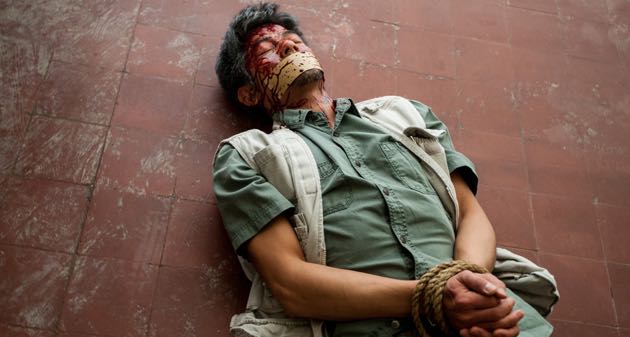 Here are the Friday screenings, with pictures & summaries courtesy of the festival: With his directorial debut, actor Chen Jianbin walks in the footsteps of A Touch of Sin, No Man’s Land, and Black Coal, Thin Ice and offers a hard-edged mainland noir where kindness and cruelty, madness and reason, greed and humanity all struggle for dominance and the fool might not be who you think . The hook here is Chen’s amazing performance as the simple, slightly crude Latioazi, a goat farmer who has a son in jail. When a young mentally handicapped man follows him home one day and enters his life, it sets off a blaze and a chain of events follows, which bares China’s class divide raw. His random act of reluctant kindness invites a parade of strangers and grifters all intent on draining Latioazi of what little he has.

Director Philip Yung’s PORT OF CALL’s central incident is the brutal murder of a young 16-year-old Hunan girl who moved to Hong Kong with her family and fell into prostitution. Winding through time and grounded by Christopher Doyle’s gauzy cinematography, the film follows both the story of the young girl’s descent into sex work and Aaron Kwok’s grizzled detective as he obsessively seeks an answer to the brutality of the murder. Kwok is astonishing here in his career’s best role, with all the tics and haggard body language of a man beaten down by the violence that threatens to drown him at every turn. Stage actor Michael Ning is also chilling as the killer. So that’s Day One. See you back here in a minute for Day Two,