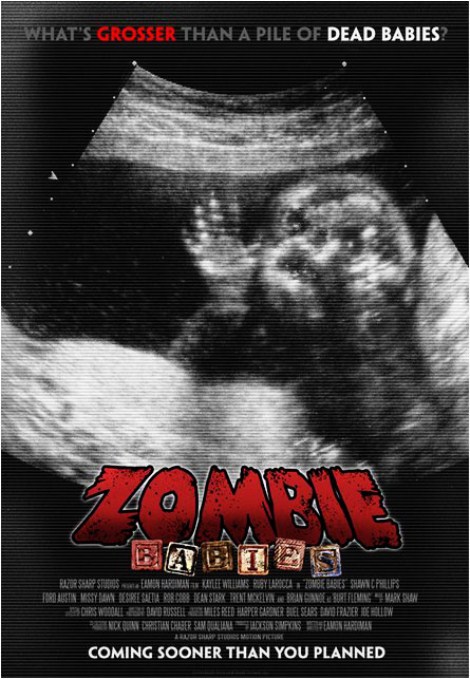 There’s two important items that have to be gotten out of the way quickly before going into great detail about Eamon (PORKCHOP) Hardiman’s ZOMBIE BABIES.  The first is that is titled ZOMBIE BABIES.  Everyone should know that the proper conjunction of ZOMBIE and BABIES is ZOMBABIES, which rolls off the tongue easily and fits nicely on a poster.  You should only title your movie ZOMBIE BABIES if it is a play on Jim Henson’s “Muppet Babies,” exploring the demise of the group and giving us a final resolution to the question of what happened to Nanny and Skeeter after the show.  ZOMBIE BABIES is not that film.  (Though, seriously.  Make that film.)

The other thing to get out of the way is that ZOMBIE BABIES, by any standard critical eye, is terrible.  It’s shot on low-rent video, features awful acting and some of the most embarrassing green screen work I’ve ever laid eyes on.  It also has puppet work that ranks somewhere between HOBGOBLINS and BLACK DEVIL DOLL FROM HELL in the scale of believable movie monsters.   The script doesn’t make any sense, the characters are stereotypes and the gags are puerile.

In short, it’s the sort of low budget movie that gets you to keep watching just to see how ridiculous it’s going to get.  It’s also the sort of movie you end up talking your friends into watching, just because it’s so outrageous and revolting and silly that you have to show it to them just to convince them it exists. 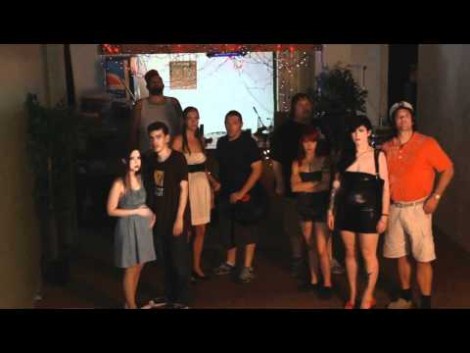 Burt Fleming (Brian Gunnoe) and his brain-addled assistant Teddy (Rob Cobb) are seedy hotel casino owners who discover a great new way to deliver abortions at the beginning of the film.  Burt introduces the idea of having an “abortathon”  for the bargain price of $30 in order to profit (?) from it, sending out fliers that bring four couples looking to rid themselves of their pregnancies to their place for a weekend of vacation and fetus disposal.

The eight pack of expendable characters include a hooker (Missy Dawn) and her wealthy john (Dean Stark, doing a Thurston Howell III impression), a doped-up baseball player (Sam Qualiana) and his girlfriend (Desiree Saetia), an overweight gamer (Shawn Phillips) and his disinterested one-time conquest (Ruby LaRocca) and a dumb t-shirt designer (director Hardiman under a pseudonym) and the only “sympathetic” character in the film (Kaylee Williams).  With the exception of Williams, they’re all portrayed as idiots, and the acting ranges from “mediocre” to “Doris Wishman,” but you can tell the characters apart, which is really the only bar to reach in this sort of thing.

The abortioning goes well, though “good girl” Williams backs out.  In fact, it goes so well that all of the newly-defetused ladies celebrate by having sex with their boyfriends, allowing the film to get in the obligatory breasts before the actual plot kicks in.  As soon as that’s done, however, the batch of abortions get stored next to some bad moonshine that causes them to become the title critter and begin going after their would-be future parents.  From there on out, it’s essentially the same plot as the similar “abortions gone wild” horror flick THE SUCKLING, though ZOMBIE BABIES is far more disgusting, and infinitely sillier.

Those who read the plot and expect some sort of Larry Cohen-like subtext as to the nature of abortion in relation to women’s rights should probably look at, well, a Larry Cohen film.  Abortion is basically just used as a jumping off point because, as every Planned Parenthood protestor knows, aborted fetuses are just gross.  Sure, you could take the idea that the movie is titled ZOMBIE BABIES rather than ZOMBIE FETUSES to mean something, but ZOMBIE FETUSES is an even more awful title.  The fact that the “last girl” is the one who chooses not to get an abortion doesn’t really mean anything either when all of the other girls are such brain dead, self-indulgent morons that it’s practically out of character for them to be smart enough to know better than to contaminate the human gene pool with their offspring.

No, ZOMBIE BABIES is just content to be a gross-out comedy movie, as the group gets picked off in the most vile methods possible, even if there’s way too much talk in between.  The first death sets the revulsion bar incredibly high, as a guy is handcuffed to a bed and gets suffocated by a baby pooping out the most ridiculous flow of brown substance outside of SALO.  While the others demises don’t quite live up to that standard, at least one comes close, and they’re all entertainingly awful, and if they weren’t done in such a low-rent comic style, they’d be positively unbearable.

The juxtaposition of the goofiness of the cast and crew, especially Gunnoe, who reads more as a “morning radio DJ playing a character” than a “villain,” with the completely over-the-top vulgarity of the death scenes gives ZOMBIE BABIES a weird charm that makes it compelling despite its’ many, many, many flaws.  As dumb as the script is, there are even a few genuinely funny moments, such as when the portly gamer tearily records his would-be girlfriend’s abortion on his phone, “so our kids can watch it.”  Sure, the humor is the gallowiest of gallows, but it’s so wrong all of the time that it does manage to hit some hilariously shocking moments on occasion.