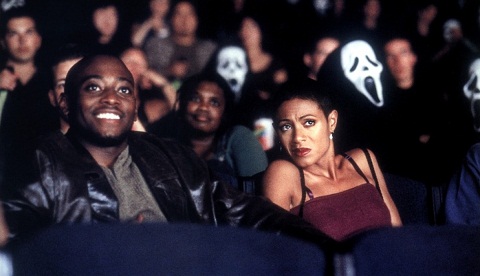 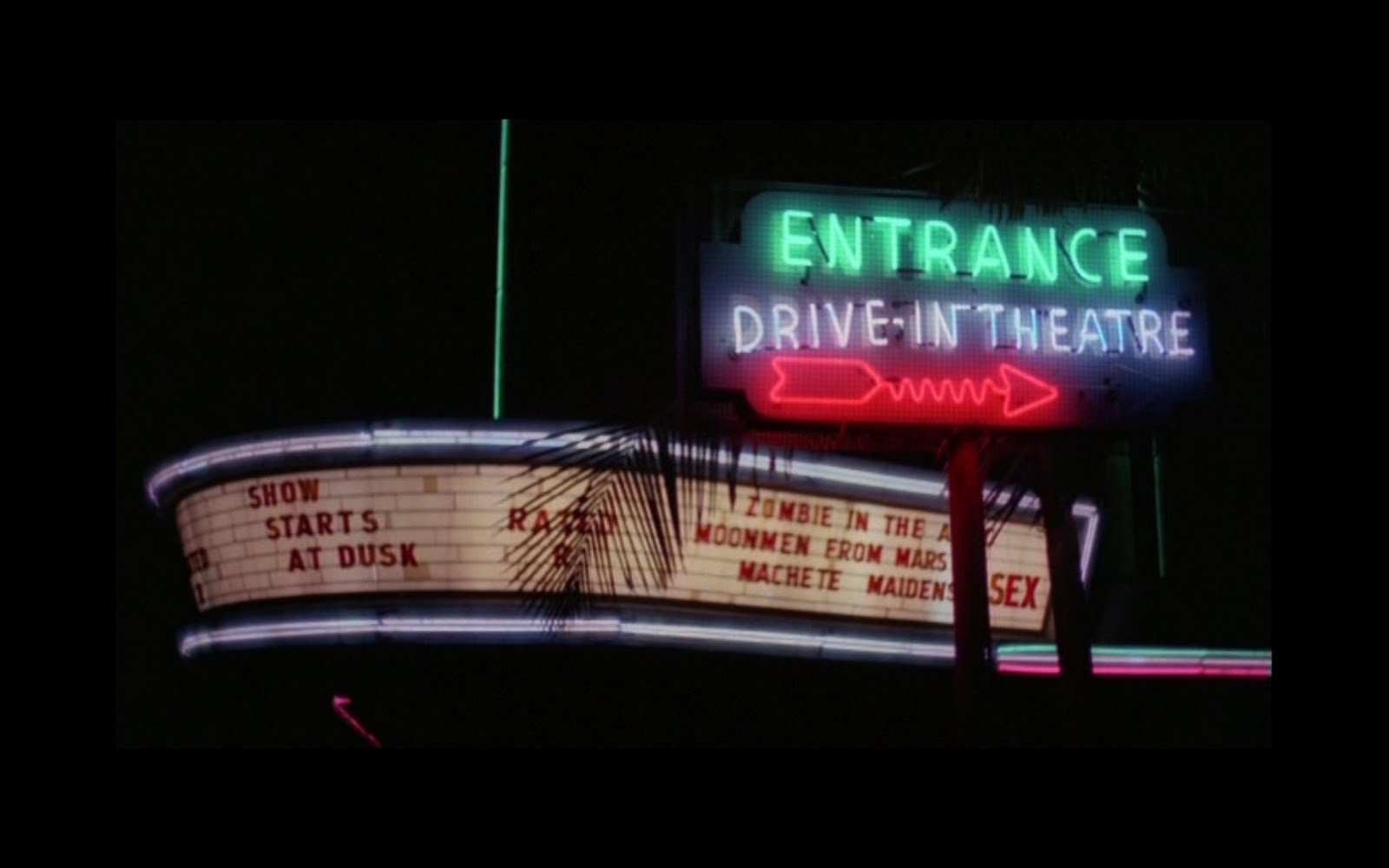 October is upon us, and there’s no better way to spend your time than watching as many horror movies as possible leading up to Halloween. Many theaters take advantage of the season by running special programming throughout the month, and there are a number of amazing events all around the States throughout the month. Here is a quick guide to some big shows happening across the country –if you know of any that aren’t listed here, feel free to post about them in the comments below!

Cinema Wasteland is arguably the best cult/exploitation/horror convention in the country, a relatively intimate affair with tons of great vendors and guests, as well as a packed schedule of 16mm screenings of classic films and digital screenings of new and old films. This October’s guests include Caroline Munro, Kyra Schon, Mink Stole, Greydon Clark, Veronica Carlson, Martine Beswick, and more! Screenings include DR. JEKYLL AND SISTER HYDE (starring Martine Beswick), THE HAND (Oliver Stone’s early horror film), DOOM ASYLUM, EVILS OF THE NIGHT, and WITHOUT WARNING among many, many others. Get full info here.

The Music Box Theatre is one of the best places to see a movie in the city of Chicago, and what better way to spend a weekend than watching 24 hours of horror movies in this beautiful, historic theatre? This is the third year for the Music Box of Horrors show, and their previous two shows have had solid line-ups including the premiere of the remastered DCP of William Lustig’s MANIAC COP 2 (with Lustig in person), SQUIRM (with director Jeff Lieberman), EDDIE THE SLEEPWALKING CANNIBAL, an extremely rare 35mm screening of TERRORVISION, and a lot of other fun stuff. This year’s full lineup has not been announced yet, but it will be a mix of 35mm and digital screenings (including THE BORROWER, with John McNaughton in person, screened from laserdisc!) and Everything Is Terrible will be presenting shorts, trailers, videos, etc. between films. Full info on the Music Box site here. 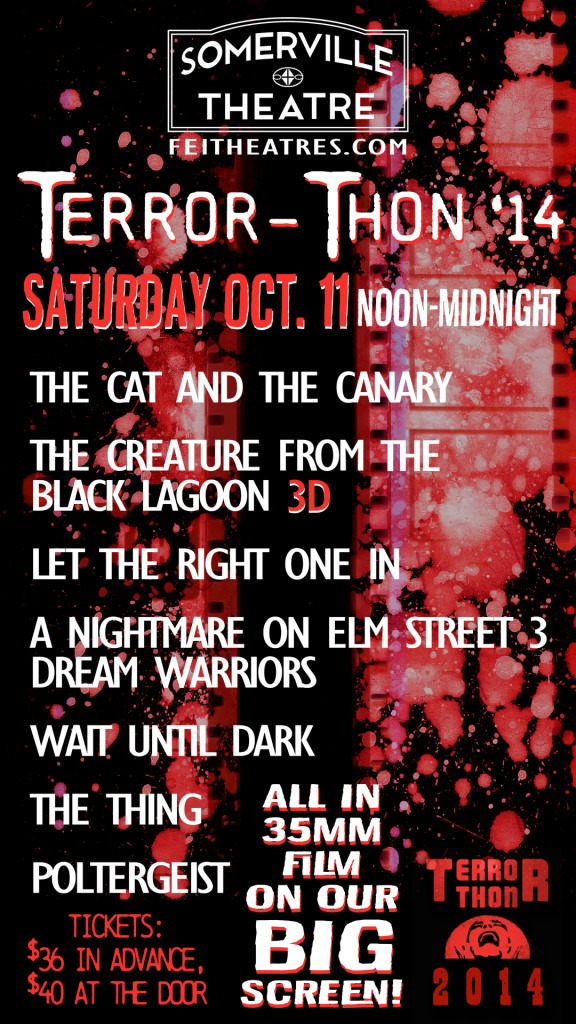 The Somerville Theatre in Somerville, Massachusetts presents a 13-hour marathon of 35mm features including THE CAT AND THE CANARY, THE CREATURE FROM THE BLACK LAGOON (in 3D!), LET THE RIGHT ONE IN, A NIGHTMARE ON ELM STREET 3: DREAM WARRIORS, WAIT UNTIL DARK, THE THING, and POLTERGEIST. Visit the Somerville Theatre’s web site for full info and tickets.

The Cinefamily’s Halloween programming for the last two years has been astonishing, and while they are scaling back a little this year, this should be a fantastic show. Cinefamily’s Heavy Hitter Midnites teams up with the New Beverly Cinema’s Grindhouse Film Festival to present an all-night, all-35mm show packed with features, shorts, trailers, and much more. Stay tuned to the Cinefamily web site for more information and tickets.

This two-night Halloween show is held at the Hi-Way Drive-in, which has two screens. There are two movie blocks of four movies each (three announced and one “secret” film per block), with titles including A NIGHTMARE ON ELM STREET, SHORT NIGHT OF GLASS DOLLS, PROM NIGHT, and RATS: NIGHT OF TERROR. To keep up with the latest information leading up to the show, visit the Facebook event page here. 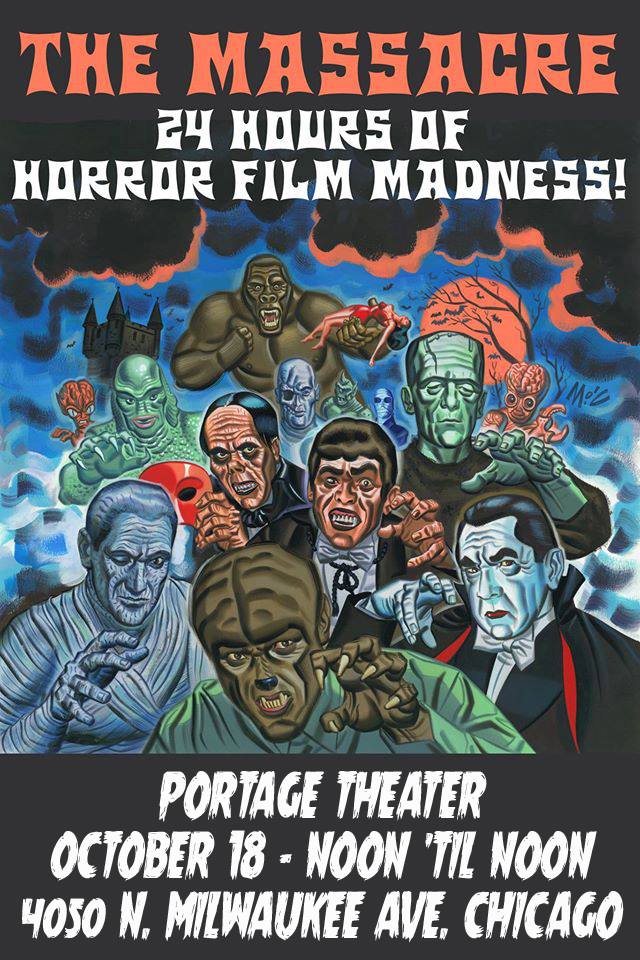 Chicago’s longest-running 24-hour horror marathon is Movieside Film Festival’s Massacre, celebrating its tenth year in 2014. The Massacre started at the Music Box, but moved to the Portage Theater in 2012 (prompting the Music Box to launch their Music Box of Horrors event) and the Patio Theater in 2013. This year, the Massacre returns to the Portage for a mix of digital and 16mm screenings of classic horror films including CHOPPING MALL (with Jim Wynorski in person), THE DEADLY SPAWN (with Douglas McKeown in person), TARGETS, TWINS OF EVIL, CEMETERY MAN, TENEBRE, DAY OF THE DEAD, and THE TOWN THAT DREADED SUNDOWN. Movieside is a huge supporter of local Chicago filmmakers, and will be screening shorts, videos, and trailers from local filmmakers. For the latest information, check out the Facebook event page here. 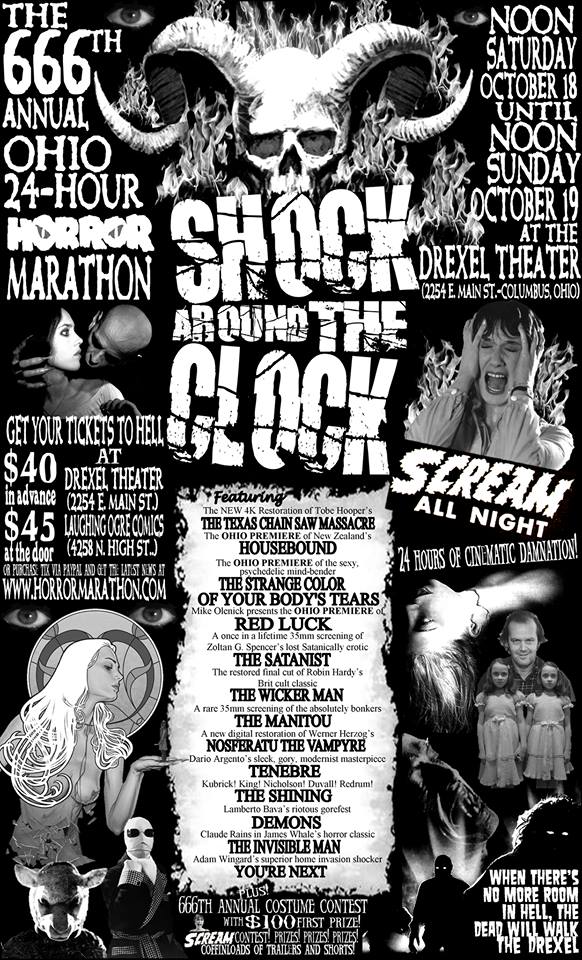 Shock Around the Clock is a 24-hour horror marathon held at the Drexel Theatre in Columbus, Ohio, an offshoot of a 24-hour sci-fi marathon that has been running for decades. Their lineup has traditionally been a mix of new films and classics screened from both film prints and digital, and this year is no exception. This year’s full lineup has been announced, and it’s pretty incredible: HOUSEBOUND, THE STRANGE COLOUR OF YOUR BODY’S TEARS, THE SATANIST (only known existing 35mm print—this played at the Exhumed Films Forgotten Film Festival back in June), THE TEXAS CHAIN SAW MASSACRE (new 4K restoration), DEMONS (35mm), TENEBRE, NOSFERATU THE VAMPYRE (new 2K DCP), THE INVISIBLE MAN, THE WICKER MAN, THE SHINING, THE MANITOU (35mm) and YOU’RE NEXT. Full info and tickets available here.

The Cinefamily’s second horror marathon for October is a co-production with Friday Night Frights: a screening of A NIGHTMARE ON ELM STREET parts 1 through 7, all screening from 35mm prints, all night long! Keep an eye out for more info and tickets on the Cinefamily web site. 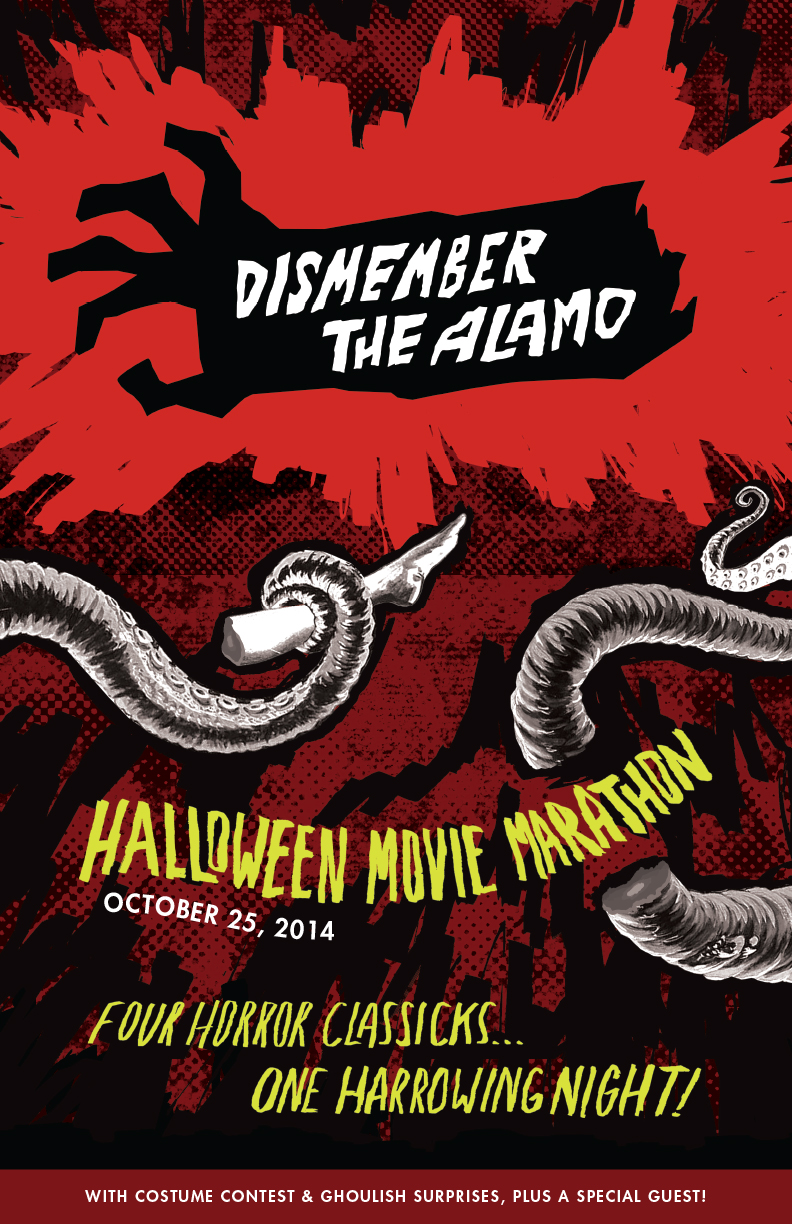 The Alamo Drafthouse is launching a new Halloween movie marathon this year, held 12 of their locations nationwide with each location screening four different films and each location featuring a different special guest. None of the films screening (or guests) will be announced in advance, but considering the Alamo’s reputation, horror fans can be sure they’ll be in for a treat. Find out if your city is on the list and get tickets through the Drafthouse web site.

Philadelphia-based Exhumed Films has some of the best genre and cult programming in the country, and this is their eighth annual 24-hour horror marathon. As tradition dictates, the schedule for the show is shrouded in secrecy, the audience discovering what the lineup is as the films hit the screen. Previous marathons have included such rarities as XTRO, C.H.U.D., WELCOME TO MY NIGHTMARE, TINTORERA, PSYCHOMANIA, NIGHT WARNING, and countless others. Exhumed also sneaks in at least one utterly bizarre feature, usually (but not always) deep in the lineup, just to freak everybody out: these have included TEENAGE MOTHER, BOARDINGHOUSE, LADY TERMINATOR, THE LEGEND OF THE WEREWOLF WOMAN, RAW FORCE, and WICKED, WICKED. This show has sold out in hours the last couple of years, and this year was no different. Anyone interested in trying to snag a ticket is advised to stay tuned to the Exhumed Films Facebook page, where people with extra tickets generally go to sell or trade: https://www.facebook.com/ExhumedFilms

If you need a comedown after gorging on horror movies throughout October, Outcast Cinema and the Anthology Film Archives in New York have you covered. As the name suggests, this event is a 12-hour marathon of seven features all screened from 35mm prints. Titles are being kept a secret, but the AFA site has some hints: “…a little-seen Canadian slasher film! A nature-run-amok masterpiece! A Mexican horror matinee! British anthology terror! Satanic death cults! Lesbian vampires! And a Hollywood-star-studded mindblower that must be seen to be believed.” Full information and tickets available on the Facebook event page.