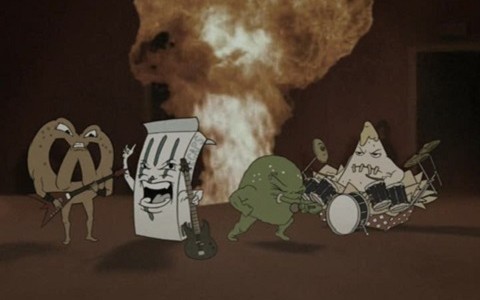 When “Let’s All Go to the Lobby” first hit theaters in 1953, the mixture of Dave Fleischer animation and a catchy jingle was just intended to sell some snacks in between movies. No doubt Filmack Studios, who produced the film and is still in operation, had no idea that the little ditty would become so iconic, a known short over 60 years later even to those who’ve never even seen a drive-in movie. It may very well be the most-viewed short film of all time. Heck, it’s even been selected for the United States National Film Registry by the Library of Congress! Not bad for a minute-long jaunt made to convince audiences that the hot dogs at the snack stand that have been rotating for the past three weeks are, in fact, edible.

“Let’s All Go to the Lobby,” and other intermission and theater policy trailers, have a format so common that it’s easy to parody, so there’s no surprise that there’s a fairly long history of filmmakers doing just that. The following shorts weren’t necessarily intended to be shown before the latest TRANSFORMERS flick (though some were created for very specific films), but all of them are entertaining, especially for those who can’t get that damn little lobby song out of their head. So read on, and I’ll go get myself a treat.

Let’s All Go to the Lobby
Dir. Ben Lane

The food bites back in Ben Lane’s Flash-animated short remake of the iconic intermission sales pitch. I wouldn’t buy from that guy behind the counter, either.

Created as interstitial segments for THE ANIMATION SHOW, a collection of (obviously) animated shorts, the incredibly talented Hertzfeld lends his twisted sensibility and willingness to let things get weird to three segments that start out with simple instructions as to how to behave and quickly descend into something much more awkward. “Let’s All Go to the Lobby,” of course, is given proper reference.

The 1985 Troma movie directed by Charles Kaufman is, well, a 1985 Troma movie, albeit a fairly entertaining one that also includes fake trailers, but the opening, featuring stop-motion theater food behaving very, very badly is a minute of pure, glorious chaos.

The animators at the Missouri-based MK12 collective turned a very familiar short of rotating intermission ads into a disturbing nightmare in this amazing short that nails the tone perfectly as a popcorn misstep heralds things going very, very wrong. 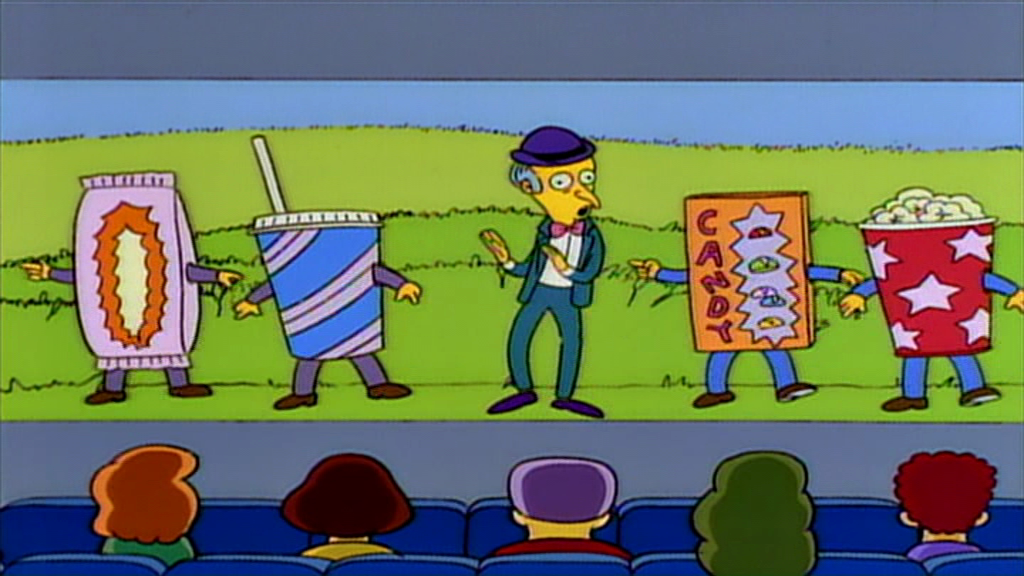 Like everything else iconic, the theater promo has been parodied by “The Simpsons,” notably in THE SIMPSONS MOVIE and in a couple of different episodes where the family goes to the theater, but the best is the brilliantly awkward moment when Mr. Burns buys his way into the “Let’s All Go to the Lobby” promo. No clip from this, because “The Simpsons” is basically on copyright lockdown.

The BBC series “Look Around You” satirized education programming, but for their 10th anniversary special in 2012, the creators chose to take aim at the intermission film, producing a pitch-perfect three minutes of absurd recommendations as to how to spend your time.

With more double entendres per minute than an evening at Paul Lynde’s house, this short is certainly just as tasteless is the title of the zombie flick it’s used to open, but the look is nailed, so you may not even notice how filthy it is for at least, oh, a second or two.

CUT YOU UP WITH A LINOLEUM KNIFE
Dir. Matt Maiellaro, Dave Willis

Mastodon – Cut You Up With a Linoleum Knife from Juliana on Vimeo.

Honestly, there has never been a fictional sales pitch for candy/warning to be courteous better than the music video for Mastodon’s track, featuring the most badass foodstuffs in theater promo history. Originally made to open AQUA TEEN HUNGER FORCE COLON MOVIE FILM FOR THEATERS, the short has taken a well-deserved life of its own, and honestly, should be played before every R-rated film in theaters today.

More fakery can be found in our Top 10 Fake Ephemeral Films!