Home  ⁄  The Wire  ⁄  Time to Haul Ass to the North Pole: The 10 Best Christmas Car Chases

There are many hallmarks of the holiday season, both beloved and dreaded, and one that belongs to the latter category is driving. Whether it’s to Grandmother’s house, or to the shopping centers, or simply through the holiday traffic, driving and its attendant frustrations has become a Christmas pastime. Hollywood takes the magic of driving in December (reckless drivers, slippery roads, constant screaming) and only slightly exaggerates it by adding spectacular crashes, explosions, screeching tires, and a lot more screaming. Here are the best scenes celebrating the insanity of the road (via cars, motorbikes, sleighs, and more!) on Christmas—ranked in order of their holiday spirit.

There’s no city Christmasier than New York, and that goes double for driving conditions. When “real life Grinch,” Rebecca (Ilana Glazer), interrupts three friends’ traditional holiday hangout by swiping weed from Chris (Anthony Mackie), he and his two pals Isaac and Ethan (Seth Rogen and Joseph Gordon-Levitt) pile into the football star’s Red Bull-sponsored limo to chase her down. Recklessly driving a limo through NYC traffic on Christmas Eve is just as bad an idea as it sounds, and soon the limo’s overzealous and highly Canadian driver (Nathan Fielder) has totaled the vehicle, causing the trio to rush to an unattended sleigh complete with horses to continue their pursuit. Unfortunately, they’re a little too overzealous themselves, and Isaac goes for a rough ride after the sleigh comes apart due to being anchored to a nearby pole. Always untie your sleighs, people!

It may be Christmas 1985 in Los Angeles, but the streets are filled with people fighting a war from the year 2247. Trooper Jack Deth (Tim Thomerson), in the body of his ancestor, is fleeing the pursuit of the evil Trancer creator Whistler (Michael Stefani) in the body of his ancestor, a police detective (mental time travel—just go with it) while carrying the precious cargo of Hap Ashby (Biff Manard), whose own ancestor will go on to be one of the leaders of the world in the future. While Deth and Ashby careen down stairs and avoid Whistler’s Tranced police, Deth’s punk girlfriend Leena (Helen Hunt) attempts to thin the herd by leading some police away on her motorbike. She makes a daring escape, plowing through a first story window, only to find herself inside an unsuspecting old man’s living room as he trims his Christmas tree. Santa may not have arrived that night, but the future star of Mad About You did!

The heroin smuggling ex-military group Shadow Company are on Detectives Riggs (Mel Gibson) and Murtaugh (Danny Glover)‘s naughty list, so it’s only fitting that most of their final showdown be amongst the Christmas decorations on L.A.’s Hollywood Boulevard. This is a car chase where the two heroes aren’t ever in cars or any form of transport—Murtaugh uses his trusty six shooter to send the car of General Peter McCallister (Mitchell Ryan) into a bus, causing it to explode, while Riggs pursues the vehicle of Mr. Joshua (Gary Busey) on foot, all the way to the freeway. Riggs may be a superhuman-like specimen, a living “lethal weapon,” but even he is no match for *checks notes*…an Audi. 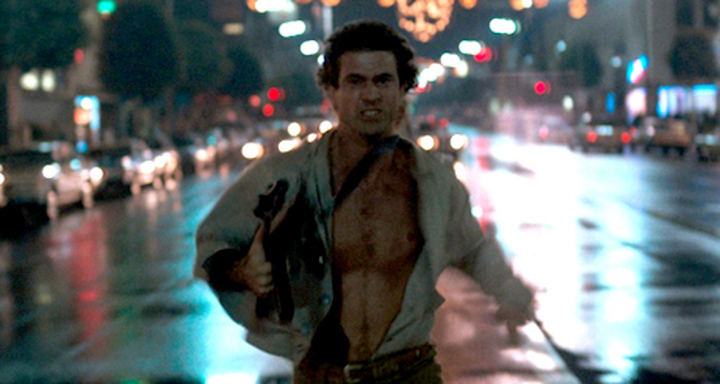 The Penguin (Danny DeVito), neé mayoral candidate Oswald Cobblepot, is hellbent on framing Batman (Michael Keaton) as a criminal in order to clear a path for his ascendancy to office. After staging a murder for which Batman seems to be responsible, Penguin and his Red Triangle Circus Gang sabotage the Batmobile, turning it into a remote control wrecking ball with Batman helplessly at the wheel. The Caped Crusader tries valiantly to sever the Penguin’s control as the villain plows the Batmobile through rows of cars and, nearly, unsuspecting Christmas shoppers. Finally, Batman prevails, escaping the authorities by transforming the Batmobile into a Batmissile. If only avoiding and getting through holiday traffic were so easy for all of us!

Most office Christmas parties end with some awkward jokes and a fruitcake that no one will eat, but the one at Zenotek ends with executives Clay (T.J. Miller) and Josh (Jason Bateman) attempting to pull off a bridge jump in honor of the FAST & FURIOUS franchise. Clay, with thousands of dollars strapped to his body underneath his Santa suit, is in a substance-fueled haze, thinking that such a stunt will redeem his poor managerial record. Josh is piled in a minivan with a bunch of other Zenotekians, chasing after Clay to stop him, which then turns into Josh sympathetically joining him. Thanks to Clay’s sister, Carol (Jennifer Aniston), no one jumps the bridge, but there’s still a massive crash. If you have good insurance, try it at your next company party!

It may not quite be the case anymore thanks to online shopping and economic change, but department stores used to be madhouses at Christmas. The only thing that could’ve made a Montgomery Ward more hazardous during the holidays is a Gremlin infestation, and that’s just what happened to Kingston Falls in ‘84. Gremlin leader Stripe is threatening to respawn his mischievous brethren while heroic Billy Peltzer (Zach Galligan) is wounded and helpless, when good Mogwai Gizmo comes to the rescue. Tearing down the aisles of the department store in a Barbie RC car, Giz avoids obstacles like falling sports equipment, clothing racks, and Barney The Dog in order to make it in time to stop Stripe. To survive shopping on Christmas, it really does “take a certain kind of guy”—er, Mogwai.

Escaping from SPECTRE’s secret base in Switzerland, James Bond (George Lazenby) is rescued by his soon-to-be-fiancé, Tracy (Diana Rigg), in the middle of a festive and oddly creepy Winter Carnival. The two make a getaway through the snow in Tracy’s 1969 Mercury Cougar XR7, only to find that Irma Bunt (Ilse Steppat) and her SPECTRE goons are hot on their tail. Tracy and Bond drive directly into a nearby stock car ice race in an attempt to lose them, as Bond wryly observes “looks like we’ve hit the rush hour.” Tracy proves herself to be not just a good racer, but a master of winter driving conditions. SPECTRE, on the other hand, isn’t so skilled.

Ah, there’s nothing like enjoying the crisp winter air on the East Coast during the holidays while participating in some seasonal travel. NYPD turned LAPD Detective John McClane (Bruce Willis), while waiting for his wife’s delayed-by-terrorists plane, embarks on a jaunt through the snow near DC’s Dulles airport, chasing down a band of ex-military criminals (a holiday tradition!) on snowmobiles. McClane deftly dashes through the snow, catching up to Colonel Stuart (William Sadler), but as to why the gun he has isn’t working, he draws a blank. McClane ends up leaping to safety off his snowmobile as it sails across the highway and explodes. Blizzards? Crowds? An airport? Flying sleigh-like vehicles? Now THIS is a Christmas movie!

For some, getting the perfect Christmas tree is essential to celebrating the season. The new father-in-law of Harold Lee (John Cho) already has his—that is, until magical circumstances and Harold’s ex-best friend, Kumar Patel (Kal Penn), cause it to burn to a crisp. Independent of each other, Harold and Kumar visit the same tree lot, with Harold just a little too late to stop Kumar from picking up the last perfect replacement tree. Harold chases after Kumar, who is being driven by his new sleazy pal, Adrian (Amir Blumenfeld). Being the world’s most irresponsible driver isn’t bad enough—Adrian also hits a patch of black ice, which sends their car flipping end over end and then catching on fire, destroying yet another tree. Sure, Harold and Kumar are known for blazing trees, but still… 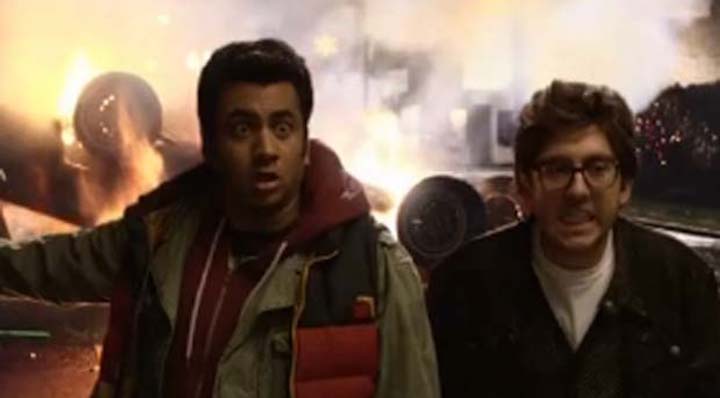 Yes, even Santa Claus (Ed Asner) himself has issues traveling on Christmas. With his sleigh grounded thanks to a near-total lack of Christmas spirit, Santa needs help fixing the Kringle 3000 engine, and along comes human-raised-by-elves, Buddy (Will Ferrell), fresh from an existential crisis. Buddy and his biological family help out, but when the Central Park Rangers spot the commotion, Santa has Buddy perform the tune up on the go. Just when it seems the sleigh won’t be able to make it, an infusion of pure Christmas spirit (thanks to some of Buddy’s family and friends) allows it to fly again, soaring away from its pursuers and climbing into the sky. Just like Santa’s sleigh, the holiday commute requires a lot of Christmas spirit to make it through.