“I’m not a nice person,” Charles Bronson explains to a reporter in 10 TO MIDNIGHT’s opening scene. “I’m a mean, selfish son-of-a-bitch. I know you want a story, but I want a killer, and what I want comes first.”

One of the greatest opening sequences to any film, and it belongs to 10 TO MIDNIGHT. 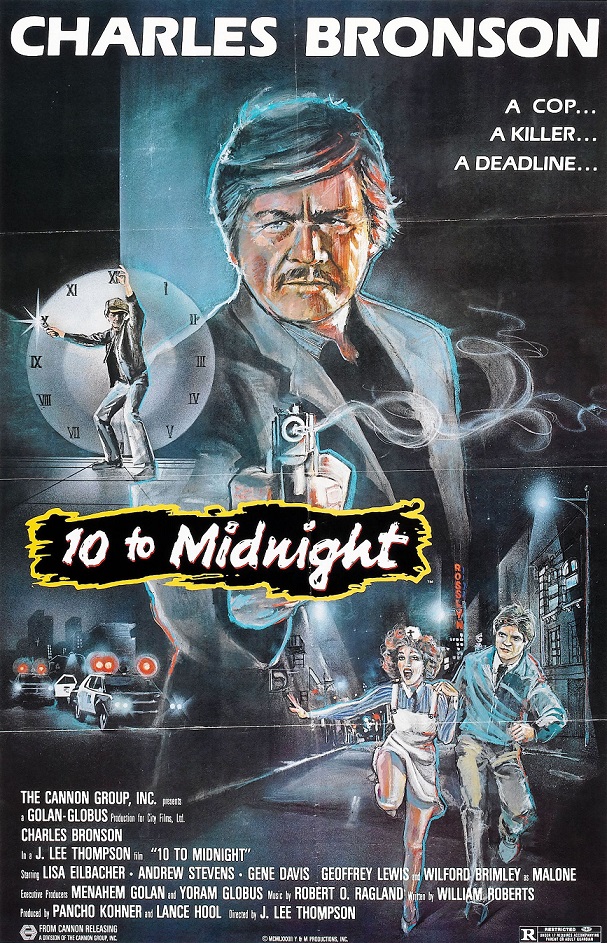 Charles Bronson worked with director J. Lee Thompson an impressive nine times, with 10 TO MIDNIGHT being their fourth collaboration. Though none of their joint efforts would be considered “classics” (as Bronson didn’t have many of those), their films are fondly remembered by the then-current and what would become the next generation of Bronson fans: films like ST. IVES, DEATH WISH 4: THE CRACKDOWN (which, while still ridiculous, was damn-near restrained when compared to the cartoonish DEATH WISH 3), and lastly, 10 TO MIDNIGHT, the closest Bronson ever got to making a horror film (unless you count his brief, silent role of Igor in 1953’s HOUSE OF WAX). A psychosexual thriller, 10 TO MIDNIGHT sees Bronson hunting down a serial killer (Gene Davis, THE HITCHER) preying on women, who commits his murders while totally in the nude and only after making obscene phone calls to girls and using a Spanish accent that would only sound convincing coming out of Speedy Gonzalez. It’s…as awkward as you’re thinking it is.

But, in spite of that, 10 TO MIDNIGHT is one of the better made films not just from the Bronson/Thompson collaborative period, but really in all of Bronson’s career. One of the critical notices about the film claims that 10 TO MIDNIGHT “sees Bronson back in his DEATH WISH shoes,” which really isn’t anywhere near accurate. (Sorry to call you out on it decades later, London Times.) Even a vague awareness of Bronson’s career is mostly comprised of his DEATH WISH series, which can be dumbed down to a simple image of him walking around with a gun blowing away people indiscriminately. But that’s the furthest thing away from what 10 TO MIDNIGHT is presenting, which is Bronson taking on quite a human and subdued role as Detective Leo Kessler, a cop who – no lie! – kills exactly one person during its entire running time. You…can guess who.

It might be the presence of Charles Bronson, or perhaps producers Golan and Globus (Cannon Films, essentially) that make critics misremember this film and write it off as nothing more than typical exploitation for which the ’80s (and Bronson…and Cannon Films) were infamous. And yeah, the film sure doesn’t miss the chance to flash a random set of bare breasts on screen, but behind the somewhat slimy on-screen events (this will sound weird), there are signs that Thompson was attempting to make a film that’s classier and more intelligent than other films of its type, despite all the…well, slime. Yes, 10 TO MIDNIGHT is a Cannon film through and through, but there’s a pervasive sense of thought and care that can be found during the flick’s running time and is possibly easy to miss if you’re not looking for them.

J. Lee Thompson would go on to direct the more straightforward horror cult classic HAPPY BIRTHDAY TO ME, one of the many holiday-centered slasher films made to exploit the popularity of HALLOWEEN. This decision surprised a lot of folks, being that Thompson had been responsible for a handful of classics, among them the original CAPE FEAR – especially when it came to HAPPY BIRTHDAY TO ME‘s marketing campaign, which sold audiences their only reason to see it: “Six of the most bizarre murders you will ever see.” By this point, studios were well aware that audiences (mostly teens) were flocking to slasher films for this reason alone: bloody murder. Shades of what was to come are present in 10 TO MIDNIGHT; though the body count is rather low, the grisliness and seediness of their execution does often come off with a certain slasher film aesthetic. The final sequence, which sees “The Slasher” going after his last intended victim, is legitimately thrilling and disturbing. These instances, however, are planted into a traditional police procedural, which sees Bronson’s Kessler doing whatever he can – even unethical – to be sure the killer doesn’t walk on a technicality.

Uh oh, wait a minute. You mean Bronson plays a character who circumvents the frustrating machinations and loopholes of the law only to exact his own kind of vengeance?

Maybe the London Times was right after all.

For the uninitiated who are aware of Charles Bronson’s legacy but have sampled only a few more obvious titles, 10 TO MIDNIGHT may come as a surprise. Not quite a horror film, not quite a slasher film, and certainly not an action film for which he was most known, 10 TO MIDNIGHT borrows from nearly every genre to present an interesting mishmash of sensibilities and, miraculously, ends up a rather solid “genre” picture – though which genre it belongs to will be up to the audience to determine.