Through changing trends and viewer tastes, 2003’s South Korean horror film A TALE OF TWO SISTERS remains as steadfast and haunting as the rural estate the film’s characters occupy. Written and directed by Kim Jee-woon (I SAW THE DEVIL), it had the distinction at its time of being the first South Korean film screened in American theaters and to this day remains the highest grossing South Korean horror film of all time.

It’s easy to see why. Part retelling of ancient folklore and part psychotic reverie, the film stands effortlessly toe to toe with its peers at the time, and continues to leave footprints almost impossible for modern attempts to fill, especially the quickly forgotten 2009 American remake. It takes the tension of THE SIXTH SENSE and wraps it in its own cultural milieu with the kind of mental torment that films like HIGH TENSION were only able to scratch the surface of.

The film itself focuses on a recently released patient from a mental institution who returns home with her younger sister and father, only to face disturbing events between her stepmother and the strange ghosts haunting their house, shades of a dark past which lead to a broken family and a broken mind. Some events are real, some only in part, and some exist only in the minds of others, but you’ll never know which are which until it’s all over. 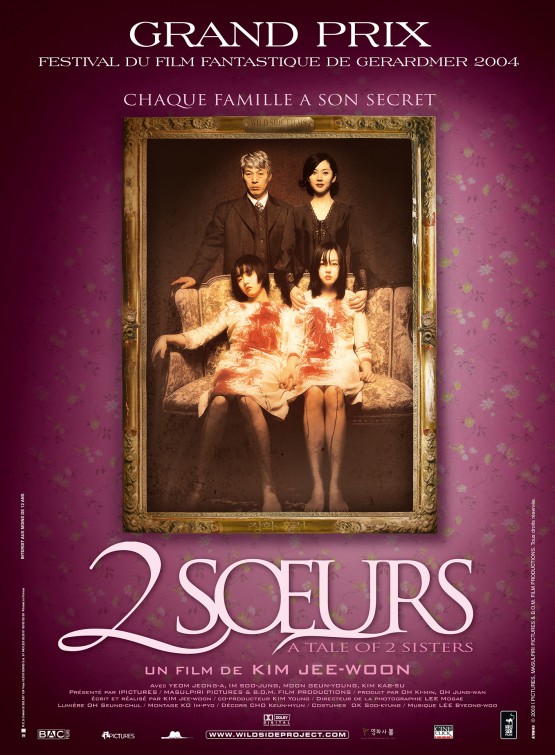 Almost like a living oil painting, the richness on every level of production makes A TALE OF TWO SISTERS a joy to come back to. The decaying wooden bones of the estate and gaunt skeletons of its occupants are wrapped in lush fabrics and furnishings of the deepest sapphire blue to the most vibrant and sanguine reds that makes even the sparsely used blood disturbingly beautiful in itself. Playing off that are the phenomenal performances of the psychotic mentally ill Su-Mi (Im Soo-jung) and evil, though beautiful step mother Eun-joo (Yum Jung-ah), monsters and terrified women draped in satin and silk. All this wrapped together in alternate moods of oppressive silence and throbbing melody, the film is both horrific and heartbreaking, beautiful and grotesque, and retains a timeless quality that makes it age like a fine dusty bottle of brandy.

Even when you know the ending, the slow unraveling of Su-Mi and her world loses none of the dread and bite it had almost twenty years ago. You can always find something new, some new hint; a shift in the background settings, a shadow in a hallway that you don’t remember belonging there, a sideways glance, a careless whisper. It’s a massive shame that it’s so hard to stream a classic like this, and if you can find it you should absolutely watch it if you haven’t. It’s still so incredibly hard to talk about without spoiling it, and that too remains impressive in itself.

A TALE OF TWO SISTERS remains, decades later, essential viewing for not only horror, but for film in general. At the time of this writing, it’s only available on Prime with a free trial or subscription to their horror sub-channel. Watch it, I guarantee you won’t be disappointed. Wrap yourself in terror and velvet.